As close as it gets to an Authentic Japanese Sword?
(for under $2,000)
The Chris Zhou Yasha Review

The legendary Longquan Master Smith and high end custom sword maker Chris Zhou dabbled for a time with the production sword market - training some smiths in what he wanted them to do with the blades and making some himself as an example.

These fine prototype blades were sent away for mounting, and that's where the story gets interesting.. 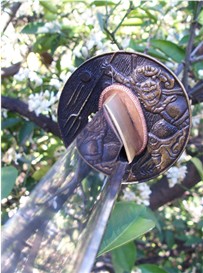 With an average online price tag of US$2,000the Yasha falls into the highest end of the production Katana world price wise. True enough, it is a far cry from the US$5,000-$30,000 price tag of an authentic Japanese sword made in Japan (Nihonto) as far as performance and aesthetics go, but while it may be heresy to say so, a Master Smith forged sword like this one comes quite close to the real thing...

Folded 14 times to produce over 16,384 layers, San Mai Laminated and then hand clayed in the traditional way, the construction of the blade itself is a time consuming process, and not so very different from that used to make an authentic Japanese Sword (Nihonto). So it should come as no surprise then that I was expecting quite a bit from this sword when it finally arrived.

Now at this stage I should point out that I did not actually buy this sword  it was loaned to me unconditionally by the owner of Musashi Swords, Mr. Sam Sung to review  without any expectations or without any strings attached. He told me who had made it and gave me some background, but he just wanted to get my impressions of it good, bad or indifferent. I warned him that it might get a little bit messed up, as I really wanted to test it like I did the sub $300 swords, and he didn't mind at all.

Hats off and Kudos to Mr. Sung! Rarely do you get to see a sword with this kind of price tag tested hard.

Anyway, back to the review..

The box it came in was big - much wider than usual. I thought that there were too swords in there, but instead when I opened the box, I saw the sword and a whole heap of stuff.... 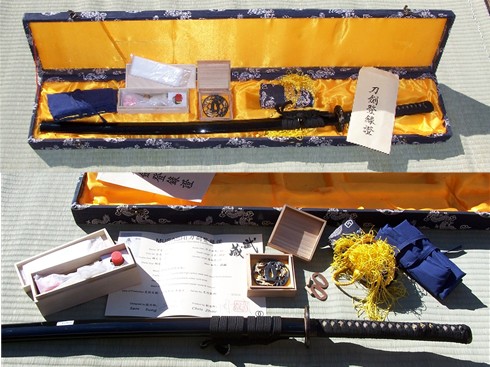 There was also a Katana in there somewhere...

While all of this stuff was a nice bonus, I was of course more concerned with the sword itself...

And here, I must admit that my first impressions were not hugely positive...

I knew who had made the blade, but my first impressions of seeing it unsheathed was that there must have been a mix up, this was just another $200-300 sword.. 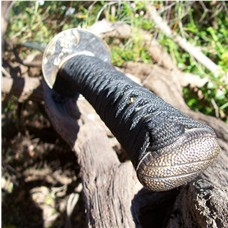 The hilt assembly of this sword was extremely simple, and not in a good way. In a 'it's cheap' way.. The ito was synthetic rayon. The rayskin, paneled and in places I could see the wood peeking through.

It did not feel comfortable, it felt rather weak and 'tacked on'..

My heart was sinking...

The tsuba itself looked cool, but the fittings seemed like cheap alloy...

What the heck, I cursed. The blade had better be AMAZING to make up for this, I mumbled as I drew it for the first time.

And when I saw it, my jaw dropped..

The blade wasn't just AMAZING, it was, quite simply awe inspiring! 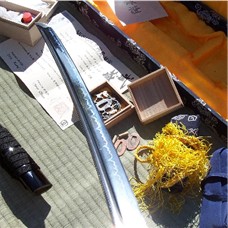 The crappy fittings were forgotten. Just looking at the mesmerizing blade itself, it would be possible to mistake it for a considerably more expensive authentic Japanese sword. The polish, weight and feel of it in the hand was indescribably beautiful.

But I think what struck me most at first was the hamon.

As you may know, the claying process used to create the famous razor sharp edge of an authentic Japanese sword  making the edge hard (in this case a HRC of 57) and the spine supple (HRC 40) as a by product creates the famous temper line known as a hamon.

Somewhere between a Sanbon-sugi and Gunome style hamon, tilt it one way and it is subtle indeed. But catch it in the right light and it literally jumps up out of the steel at you, dazzling in its beauty.

To give you an idea of the polish, look at the image below. When reflecting a nearby object, in this case some leaves from a tree, the blade literally almost becomes invisible towards the tip - a real 'Predator' effect! 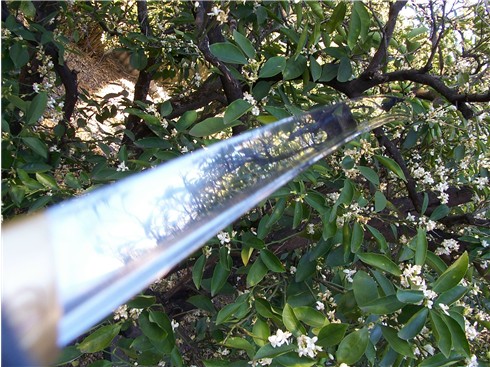 But the blade was more than a pretty show thing...

This is a user sword, designed for traditional cutting applications. You can feel that the moment you hold it in your hands.

It is so light (2.31lbs) and well balanced (Point of Balance approx 5" from the tsuba), it hardly even feels like it is there. Yet cut the empty air, and it springs immediately into life - the bo-hi (fuller) creating a distinct and very pleasant Tachi Kaze (sword wind sound).

To say I was looking forward to testing this sword was an understatement!!

While it actually doesn't usually tell you a lot, especially with Japanese swords, before the testing I had to 'thumb it' to feel for the sharpness. I was expecting a blade razor sharp beyond my wildest dreams, and did so with some trepidation, so was surprised when it felt no sharper than any other sharp Katana I had handled up to that point.

In fact, some of the cheaper ones I owned felt like they had a keener edge - it honestly didn't feel very sharp at all!

But while I was (and still am) largely ignorant of the finer points of what makes the ideal cutting edge, I knew enough to know that my 'thumb test' didn't really mean a lot. Even in my own limited experience, I knew that how it felt often had little to do with a swords given cutting ability.

A quick paper cutting test revealed that this sword was at least paper cutting sharp. But I was surprised when some light swings neatly snipped the tops of a few leaves that were there in the background, slicing them with nothing more than the slightest pass...

And I could not resist a swipe at the branch itself, cutting it cleanly in two  so easily that I felt no resistance and the blade bit deeply into the much thicker branch beneath...

Yes, this was going to be fun alright...

I originally thought this sword did not feel sharp. I was wrong...

Now of course, trees and leaves are not the usual kinds of targets for an authentic Japanese sword. The best and most traditional target modern practitioners use is: Tatami Omote, one of my favourites.

Now normally, I have a very bad habit of striking considerably harder than is necessary when cutting Tatami. Maybe it is because, when I test a sword for the first time, I simply cannot be certain if it will go through or not, so I tend to overpower my strikes.

But for these tests, I decided that since this sword was the closest to an authentic Japanese sword I have tested for SBG so far, I would ease on back and let the blade do all the work.

And as you can see from the video, this was all that was needed - the barest effort. Because after the cutting, I show clearly just how optimised for the cut this sword is...

Watch to the end to see why it cuts so effortlessly..

I found the way this sword strips away the mats like that to be somewhat disturbing. And imagine that if it run down across someones arm, it would remove skin, muscle and bone in much the same way...

It made me shudder a little to think just what an authentic Japanese sword can do...

Now to be honest, I probably should have left it here. After all, at the end of the day, an authentic Japanese sword was optimised to cut the human body. They werent designed for the kind of stuff you see in Anime, video games and movies. 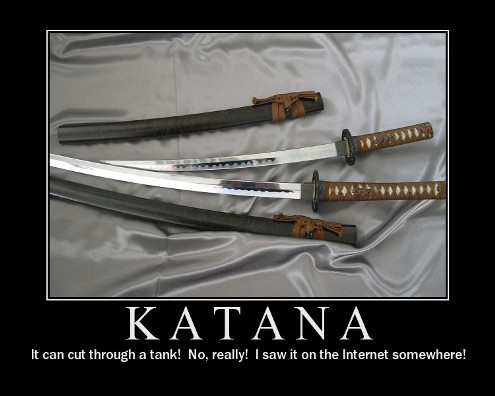 But partly to push this sword to the limit (and beyond) and partly to dispel these myths of the invincibility of the authentic Japanese sword, with Mr Sam Sung's blessing I decided to do a little harder testing..

The target I settled upon was an extremely thick tree limb...

Now in case you dont know, a tree limb is considerably more resilient and dense than a human one...! ;-) So being able to cut through such a target, while not impossible, was not what an authentic Japanese sword had been designed for.

If it was too brittle it would chip or shatter on impact, sending the blade flying through the air like a missile. And even if properly tempered, if my cut was a little off perfect it would take a permanent bend  as the flexible spine and hard edge would twist on impact and be unable to be reconciled...

I had a feeling that I would regret it.

To potentially ruin a $2000 Katana was not something I would like to do every day I can tell you!

But for the sake of demonstration of what NOT to do, as well as determining the integrity of the single pinned assembly and the purity of the blade  not to mention to demonstrate to the ignorant nay sayers out there who had bent a sub US$300 differentially hardened Katana and said an authentic Japanese sword would have been fine, and cut through a gun barrel or other such nonsense that it was a myth - I was past the point of no return.

Warming up with a nice slice through some overgrowing tree branches, I prepared the target  and prepared for the worst. Setting up the camera on a tripod, so if the blade or the hilt assembly did indeed break I would be the only one injured, I let fly with my hardest cut...

The blade did not like my poor cutting form. One bit...

As you can see, due mostly to my bad form from nerves on the first cut, it took two blows to cut all the way through. But the blade did not come out of it quite the same way it went in.. 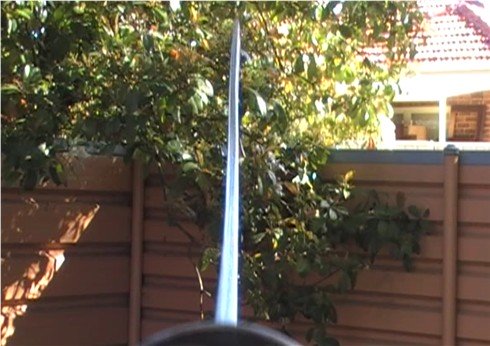 Look carefully. The blade is no longer exactly straight!

Yes, the blade was no longer completely straight. But it had held up better than I had hoped...

In some previous JSA training, I had seen even experienced sensei bend the blade of an authentic Japanese sword over his knee to straighten it after a students bad cut, so I knew it was no big deal. But the legend of the amazing, indestructible, can cut through a tank reputation of the Katana had taken a hit..

But in my opinion, this wasn't such a bad thing - it was rather more of a case of wrong tool for the wrong job in the wrong hands..

An expensive lesson that I hope to have taken so YOU don't have to repeat it yourself..

As this particular sword is discontinued, and as it was mounted in crappy fittings - but had a spectacular blade, there is not much point in a lengthy re-iteration of its particular pros and cons..

Instead, I think there are several quite deep lessons to be learn from this sword:

Oh, and the 4th lesson - I'm not a very good at cutting.. ;-) But if I was, maybe the first 3 lessons would have been missed this time around..