As such, it can be hard for the beginner to make sense of it all and get the most authentic replica - at a reasonable price point. And that is where this guide comes in..

Here we will take a close look at fully functional Replica Japanese swords that you can readily buy between $150 to $500 (aiming, whenever possible, to keep the price sub $300) that closest match the real thing due to one special forging technique known as differentially hardening..

For more info on the various techniques used to create an authentic Samurai sword, click here

There are several techniques used in the forging of authentic Japanese swords that are replicated on $150-$500 Katana.

The most common technique is folding ("Damascus Steel"). It sounds fancy, but all it means is that when making authentic Japanese swords, traditionally the steel is folded in on itself several (from 7 to as many as 16) times to remove impurities inherent in medieval Japanese steel, which was of a somewhat poor quality and consistency..

These days, considering the quality of modern steel, such techniques tend to be of cosmetic value only (i.e. they don't make the sword and BETTER, indeed they can sometimes make it worse!!).

Another more advanced technique used to make authentic Japanese swords is lamination, but this takes a master to do it properly, and so is too cost prohibitive - decent laminated swords start at at least $1000, no where near the sub $300 price point we try to aim for..

But there is one additional unique technique that is still very relevant in the creation of authentic Japanese swords - a technique that is difficult to do correctly but not so much that someone cannot be trained to do it well, and the by product of this process is the wavy and beautiful temper line on the edge of the blade that authentic Japanese swords are renowned for: the Hamon.

(click on the images to open - can you spot the fake?) 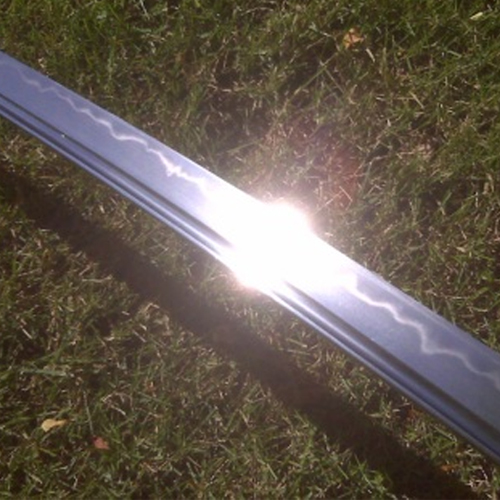 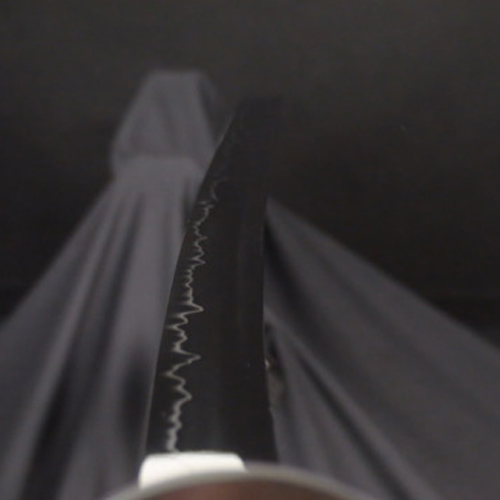 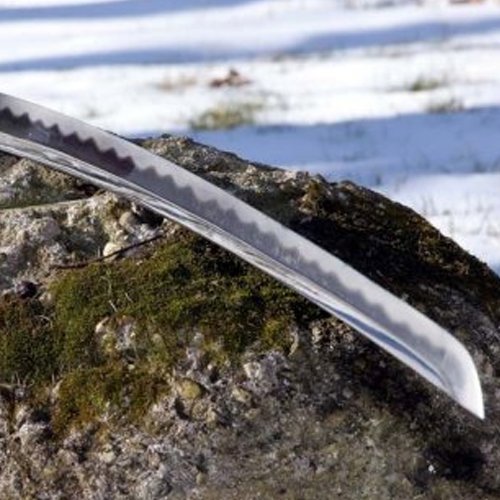 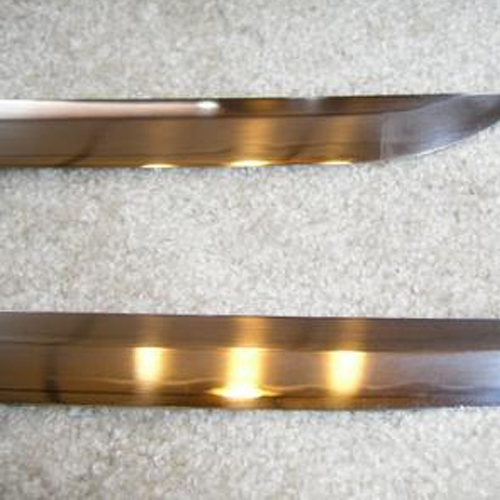 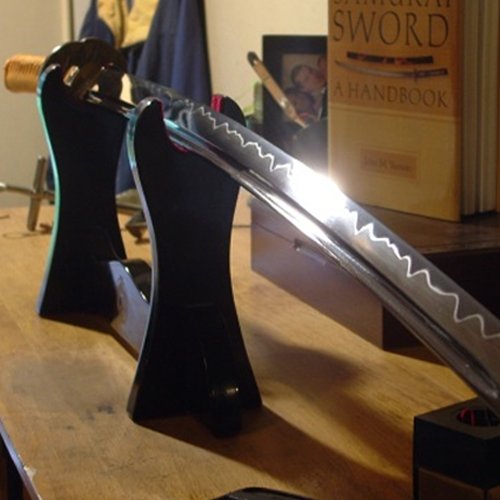 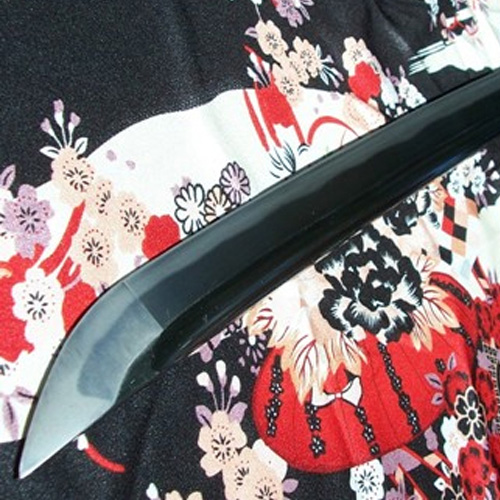 A real hamon is the result of differential hardening. In other words, the edge of the sword is made much harder than the shock absorbent spine.

The differentially hardened sword thus combines the best of both worlds, and is achieved by a process that involves covering the spine of the sword with a special clay before heating and quenching the blade, hardening the edge and creating the visible temper line between hard and soft.

99% of all 'Samurai swords' in our target price range have a fake acid etched or stencil ground 'hamon' because, naturally enough, this process adds a fair amount of time and extra costs into the production of a sword. As a result of this extra cost and effort, there are only a handful of swords to choose in our sub US$300 price range from that are truly differentially tempered (though the number is steadily growing)...

Below are two of the cheapest, though - as might be expected - both have some drawbacks, the first one more serious, the second, its main issue - simply availability..

A fairly average sword overall, but a good deal for Australians.. $190

For the serious collector or practitioner, you need to spend a little more money. But not anywhere near as much as you might expect..

Probably the best known Katana with real hamon in our target price range are the Practical Katana series by Paul Chen, owner of the Hanwei forge.

The only problem is, with increased competition they are not quite the value that they used to be (and are not sub $300 anymore). But they aren't THAT dated yet - and the fact that they are still in production and selling strong must mean that Hanwei got something right the first time...

So let's take a closer look.

The original entry level Katana. May be an old model but still holds it's own $399.95

The influx of new differentially hardened Katana on the market from a variety of makers challenged Hanwei's number one position. It became sink or swim time for the Hanwei forge in our sub US$300 price range, as the standard 'Practical' series started to look more and more dated..

Instead of just lowering their prices, Hanwei stepped up to the challenge and drastically improved their entry level functional replica authentic Japanese swords range with their Elite and XL blade geometry lines.

While these swords are not the strongest or most durable in our price range, they have the keenest, most frighteningly sharp blades - 3' long razor blades, though with all the attendant limitations you might expect from such a sharp sword as well..

But used with precision and care, they are certainly a whole lot of fun, and put Hanwei back in the game again.

An excellent sword for the money with several huge improvements over earlier models. $449.95

Crazy sharp blade geometry, but maybe just a little too sharp for its own good.. $319.20

Yes that is right, by pure coincidence the two leading men of the sub $300 differentially hardened functional replicas of authentic Japanese swords are BOTH called Paul Chen.

It's confusing at first I know, but that is where the similarities end - Paul Chen from Hanwei lives in Dailan, China and his forge produce many different types of swords at many different price points - the sub $300 Practical Series are but one small part of the whole, their entry level offering. But the 'other' Paul Chen from Cheness Cutlery lives in suburban San Diego and has been specializing in sub $300 Katana since ..

And in this case, I personally think that while the competition is extremely close, Cheness Cutleries underdog entry to this class just inches across the line with his Kaze (Wind) Katana series, a Katana and Ko Katana or Wakizashi blade, which was "the result of many popular requests for a clay tempered (hardened) blade using our 9260 Silicon Alloy Spring Steel.." and is the progeny of the first serious sub $300 Katana to challenge the status quo, the (phased out by the Kaze) Kanbai Katana..

Anyway, read the review and decide for yourself. They are not perfect by any means, but it may well be the best choice for $300 and under..

The Tatami Mat Killer that has stood the test of time. $299

Cheness Cutlery Kanbai Katana: This is the original sword that posed a challenge to the previous sub $300 monopoly by the Hanwei forge, and the concept blade that the Kaze Katana quickly evolved into.

Cheness Higo Katana: In their early days Cheness made a line of three traditionally made Katana in addition to their (soon to be famous) dojo grade beaters. This cousin of the Kanbai, the laminated Higo Katana.

So far we have covered the biggest players in our sub $300 Katana field, the lighter weight blades by Musashi and Munetoshi, the Paul Chen's (both the razor sharp Hanwei and the best all rounders, Cheness). But every now and again, another player steps in to give it a try..

To date, none have quite succeeded in cleanly taking the title. Here's one that turned out to be something of a diamond in the rough..

Often overlooked, but something of a diamond in the rough $205

And here is one that kind of flopped..

Indeed, it exhibited many of the worst characteristics of entry level Katana - but it had an interesting surprise, and proved once and for all that a blade that seems blunt to the touch, could still op your arm off..!

Valiant Armory Kobuke: By Valiant Armory didn't quite get it right. The fittings were awful, the blade looked ok but seemed blunt as a stick and only the saya looked good. But it cut. Surprisingly well. It may be discontinued, but this is a must read review.

Over the years we watched many manufacturers try to create the ultimate sub $300 Katana - the perfect balance between price and traditional forging techniques. While some came close - no-one quite nailed it. So growing increasingly frustrated, when the opportunity arose in 2008, we decided to try our own hand at it...

In short order we realized that trying to make a traditional Katana blade and have it mounted properly for under $300 involved too many shortcuts. To create the best value for money, highly traditional martial arts grade Katana we needed to concentrate on what was ESSENTIAL, regardless of price, and then do our best to bring it to the table at the lowest margin possible..

Though not before some EXTENSIVE testing of course!

Testing on a tree branch, and then a 55 gallon steel drum..!

Read the full background about how and why the SBG Katana Projects came about, what they achieved and where they are heading into the future. Click the image below for the lowdown.

Made in batches with a narrow window to buy. Sold almost at cost price and still great value. $429.99

Finally, inspired by the SBG Custom Katana - one of the most exciting sword projects that started in 2015 was the Ryujin Katana line which was the brain child of one of the founders of Musashi Swords, Mr Sam Sung..

Taking the same style of T10 tool steel sword as the SBG Custom Katana, the number of options are less - but what makes them revolutionary is how FAST they are made as they are assembled in the USA..

And they cut pretty well too - with the most basic model proving to be surprisingly durable.. 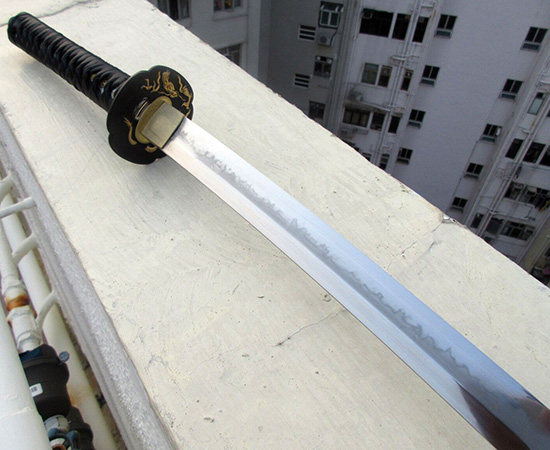 The concept was revolutionary - import the bare blades and katana parts and assemble them to the customers preference within a week!

SBG helped test and refine the concept. Out of three swords tested, one failed, one did okay and the other exceeded all expectations. $299

A second opinion review of this customizable sword from Ryujin reveals it is definitely a great value for money buy. $299 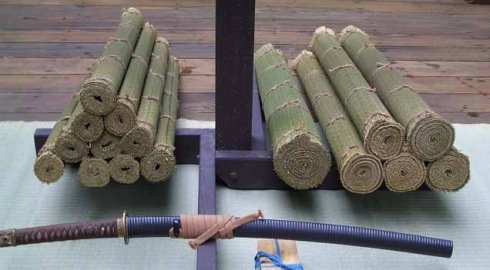 Since the MugenDachi Company stopped selling tatami mats direct to the public in 2009, it has become increasingly hard to source good quality tatami mats.

Some lovers of authentic Japanese swords have resorted to using beach mats, however it takes up to 3 to 4 beach mats to equal the same level of resistance that a single tatami mat offers, making this something of a false economy..