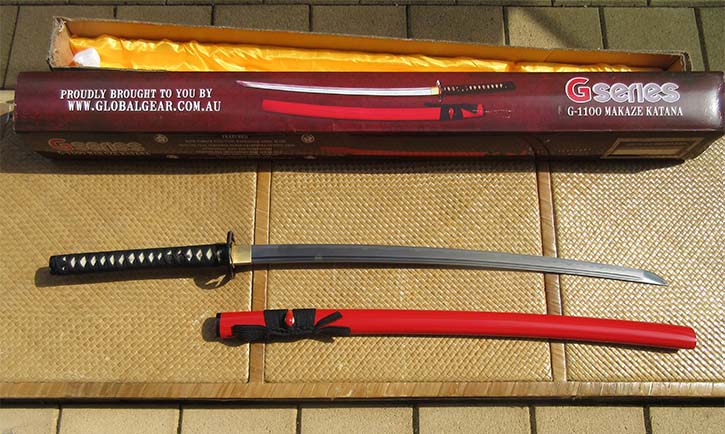 The G1100 Manganese Katana by Global Gear is the continuation of a long line of innovative sword designs from this Australian based company.

Over the years, they have experimented and often been ahead of the bell curve with a range of swords from the Chikara Katana, a blood red Titanium infused blade and a fully functional highlander sword - all of which were tested and reviewed here at SBG. 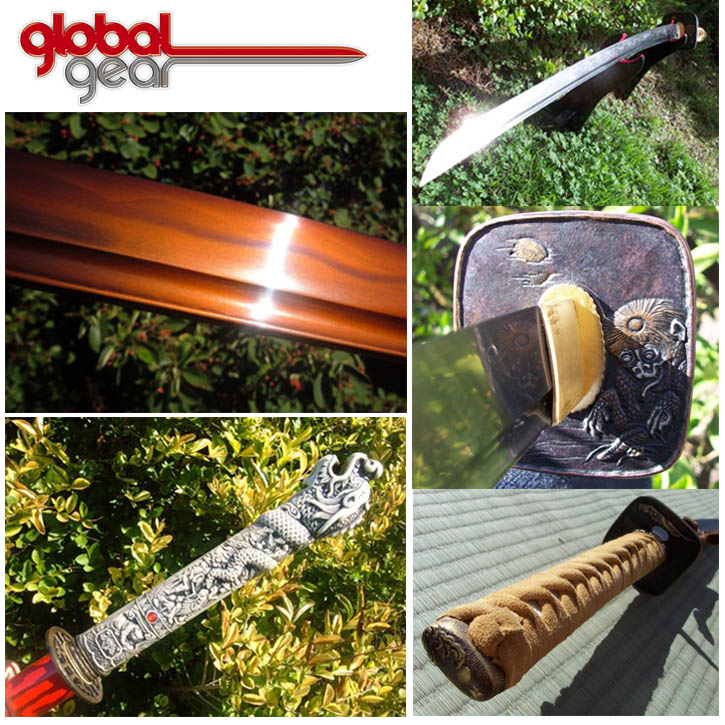 This model is part of another experimental line known as the 'Z' series - in this case the G1100 'Makaze' - and it has an impressive family lineage. But unlike the other swords - which were typically priced around $400-$550 or so - their Manganese Katana is a true budget entry for around US$250 (AUD$349)..

Exclusively available from Global Gear and made to their specifications from a sword forge in China, the G1100 continues their 'Z' series with a budget offering - the 'Makaze' Magalloy blade.

The drive to keep the price down is apparent by the sleek and simple, but still attractive and properly branded, cardboard box - allowing them to ship it domestically for free and for just $20 to anywhere in the world..

The box itself is minamalist yet does the job quite well. It also provides a little insight on the contents.

Opening it up, it has a Styrofoam base with pseudo silk lining and a couple of Styrofoam inserts keeping the sword in place - plus a couple of extras (though I did not see a cleaning kit, it did come with a sword bag and - for what it is worth - 'certificate of authenticity').

Certainly an innovative package and a good way to minimize shipping costs, both from the forge and to the customer (and as shipping costs can be killer, this is a good move on their part).

The design of this sword is simple and yet quite eye catching - a rich red saya with black ito handle and black sageo.

I will cover the fittings in detail momentarily - but first, to the Manganese Katana blade..

Straight out of the box and out of the saya, the blade does not give the best first impression as it is coated in a blotchy, patchy coating of oil that appeared to be slightly dried out.

A covering of oil is of course normal and very important on a non-stainless steel sword - but I think economizing on the oil coating is not the best idea.

Left in the box for a few more months, I have no doubt this oil would leave some nasty staining and rust spots on the Manganese Katana blade.

Luckily, it was not so far gone and was simple to clean up with some alcohol and a white, lint free cloth. 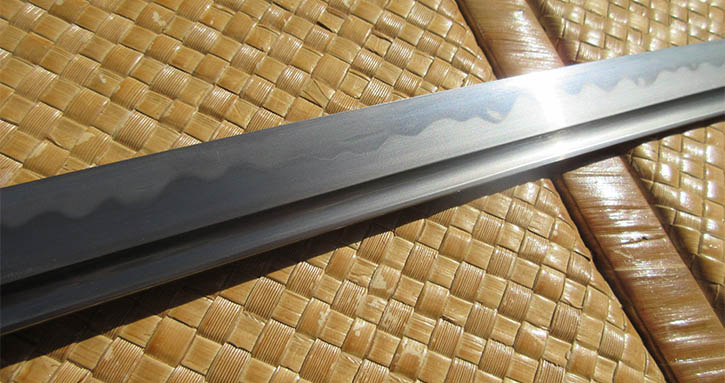 Now a Manganese Katana is made from Manganese alloy, which is a steel used frequently in the mining industry due to its high impact strength and resistance to abrasion.

Indeed, it is very similar to 9260 Spring Steel, but with a natural hamon - should, in theory, be quite similar to the Cheness Cutlery Kaze Katana..

On the positive side, for the most part, the natural hamon - which is a by product of the differential hardening process, is quite attractive.

Like the Cheness, the Kissaki (tip) is a bit of a sore point with a fairly rough counter-polish.

This is not to be unexpected on a sword under $300 as properly polishing a kissaki takes almost as long as polishing the entire blade. And on the positive side, you can see that the hamon continues neatly and correctly over the tip (the hamon on the kissaki is called the 'boshi').

On the negative side, there is an area on the bo-hi with a much bigger and further away than ideal 'tobiyaki' where the hamon 'jumped' and while it is not a flaw in any way, a true tobiyaki should be closer to the hamon and considerably smaller. 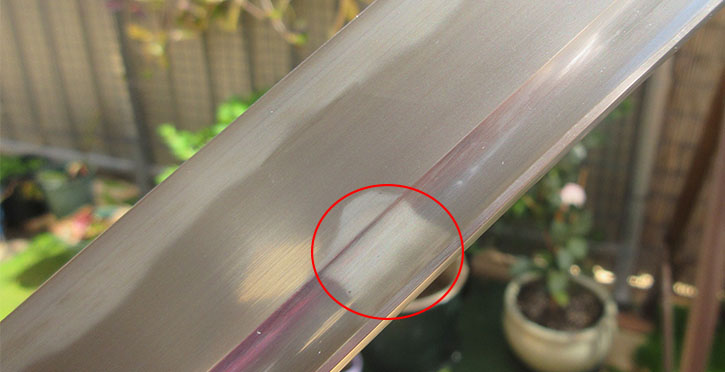 It is not a deal breaker, and has no impact on the functionality of the blade, but I think it does detract from what is otherwise a nicely executed hamon.

Overall though, for the price, the fact that this is a Manganese Katana available for US$250 with a real hamon and a couple of minor imperfections are par for the course.

The 'heart' of any Katana is the tsuba - and the Makaze Manganese Katana has a simple, yet striking 'Sukashi' (cut out) design. 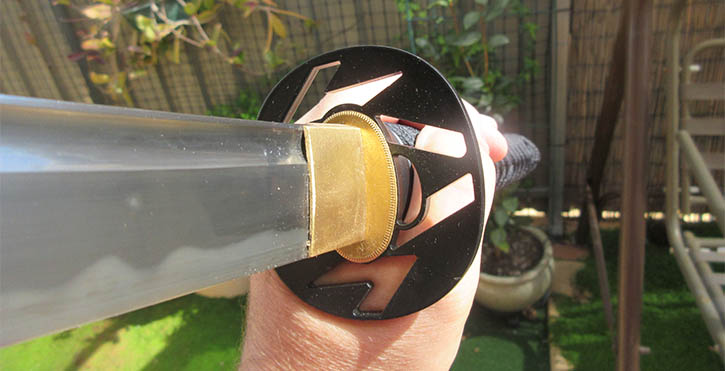 It is not the run of the mill tsuba - that is for sure, and I confirmed with a simple magnet test that it is indeed solid iron, so is nowhere near as fragile as it looks.

Another nice feature of the fittings is the seppa (brass spacers) which are not your typical cheap 'gear' style seppa. 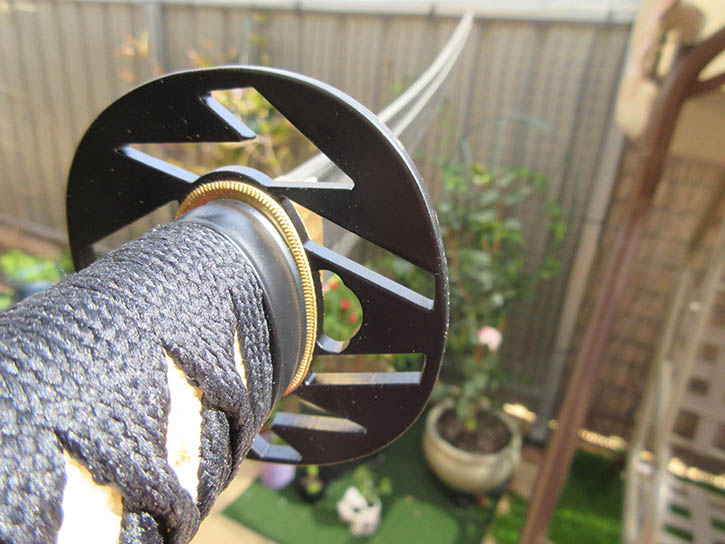 The ito wrap is quite tightly wrapped cotton and decent quality. Diamonds are nice and even - however the ito wrap is not alternating, which detracts from its overall strength and may eventually unravel easier than if it was alternating..

Unfortunately, I noticed one major discrepancy from what is written on the box (apart from the missing cleaning kit that is)..

On the box it says this Manganese Katana has "solid iron hand guard & accents". The hand gaurd is indeed iron, but the fuchi and kashira (end cap and the handle reinforcement under the tsuba) are non metallic and cheap zinc aluminum alloy..

I don't think Global Gear are being dishonest but rather a substitution has been made at the forge to meet their price point target.

This is again, not a deal killer, and overall the fittings are well assembled and decent quality for the price. But they do detract from the overall package.. 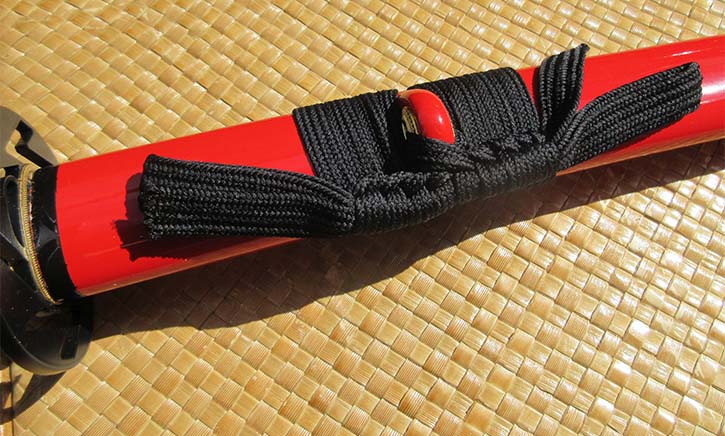 The finish of the saya is very attractive - and the sageo, while very thin, is made from decent quality cotton.

On the negative side, the saya is extremely light and insubstantial. Looking into the koiguchi (mouth of the saya) you can clearly see the wood is very stringy and somewhat weak. 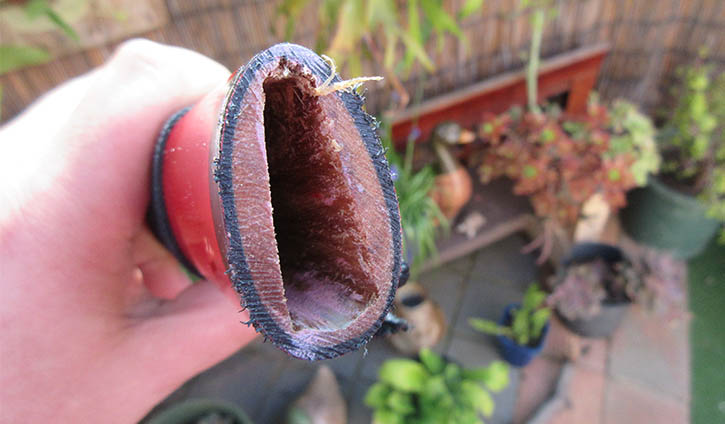 Long story short - the fittings of the Manganese Katana look decent enough at first glance but beneath the surface do not do much to compliment the blade itself.

Thankfully, this sword has a few more surprises and good points left to redeem it..

The G1100 Manganese Katana is a relatively short blade - 27.5" from the kissaki to the munemachi (the back notch of the blade collar) - 28.5" from the tsuba. 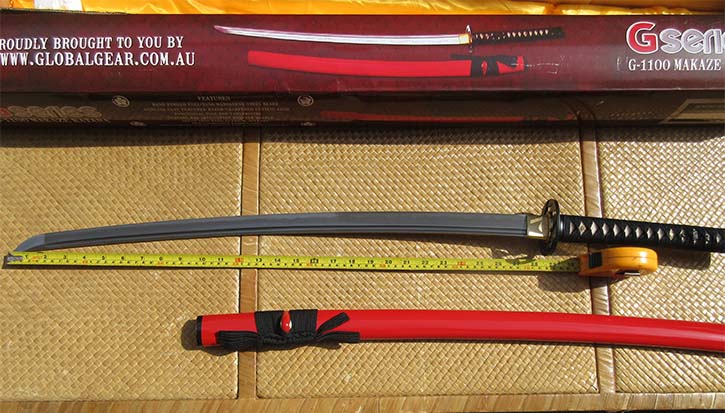 This combined with a bo-hi (fuller/blood groove) and a weight of just 2.2lbs, plus a balance point approx 6" from the tsuba all comes together to create a very agile and fast sword.

My good friend Jason who helped with the testing was especially enamored with the way this sword handles. The bo-hi makes a nice sound when it slashes the air and it is very easy to rapidly change direction mid cut.

Lightning fast springs to mind to describe the handling, making the lightning bolt like cut outs of the tsuba more pertinent than ever.

So far this review of the Makaze Manganese Katana has had quite a few ups and downs. And the roller-coaster ride continues when we come to the testing..

Here is where it gets interesting.

I have not, until this point, mentioned anything about how sharp this sword is..

Because it is NOT sharp.. Indeed, the edge feels very dull - and I confirmed this with a paper cutting test. Instead of slicing neatly, the Makaze either kind of ripped roughly through the paper and often times failed to bite..

Now for many people, this would be a deal killer. You would think a Katana that cannot cut a piece of paper and essentially fails the paper cutting test would be useless for cutting regular targets like water filled bottles, tatami and bamboo..

Clearly judging a sword simply by a paper cutting test does not reveal its actual cutting potential..

So many swords that have 'razor sharp' edges but are not tempered properly can cut paper but fail on bamboo. This sword cut both water bottles and thick, heavy and aged bamboo with not a scratch, edge roll or any other damage - which attests to the abrasion resistance of a well made Manganese Katana.

Overall, yes - it is not very sharp to the touch. But if it can cut bamboo like that, you would not want to get hit by the thing, that much I can tell you..

To make a conclusion on this sword, we need to factor in the sub $200 price point.

The blade has a real hamon, is made from a superior steel type and handles like a dream. On the negative side, it has some cosmetic issues and the fittings - aside from the tsuba, look good on the surface but are very average at best and detract from the overall package.

If you are in Australia or on a strict budget and like your swords fast and with a real hamon - I would give it an extra star rating. But otherwise, I think spending an extra $50 or $100 opens up a whole world of additional swords you can pick from and while it is a good sword, it is not at the top of my sort list.