"It Starts With One"
SBG Members Extreme Sword Collecting Gallery 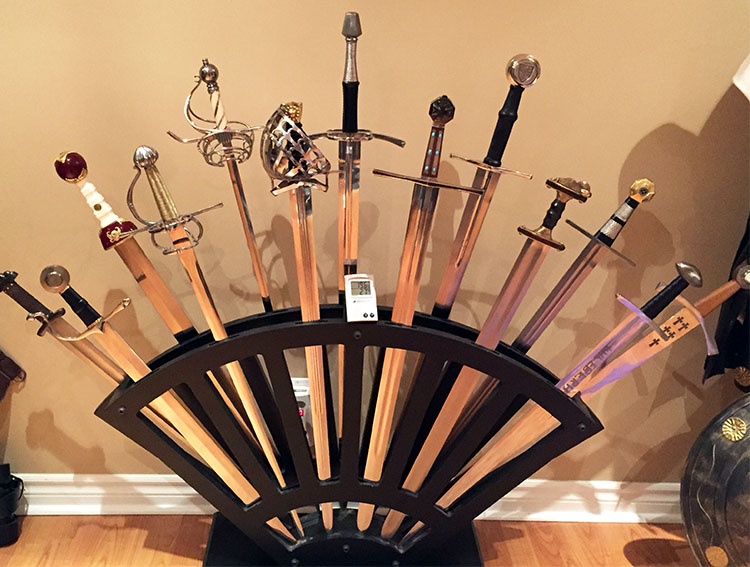 It usually happens quite by accident..

You buy your first sword, not always, but quite often a Katana.You might think the worst thing that can happen is you get a lemon, a bad sword, or a dud.

If only you were so lucky...

No, you get your first sword, and you get a good one.. 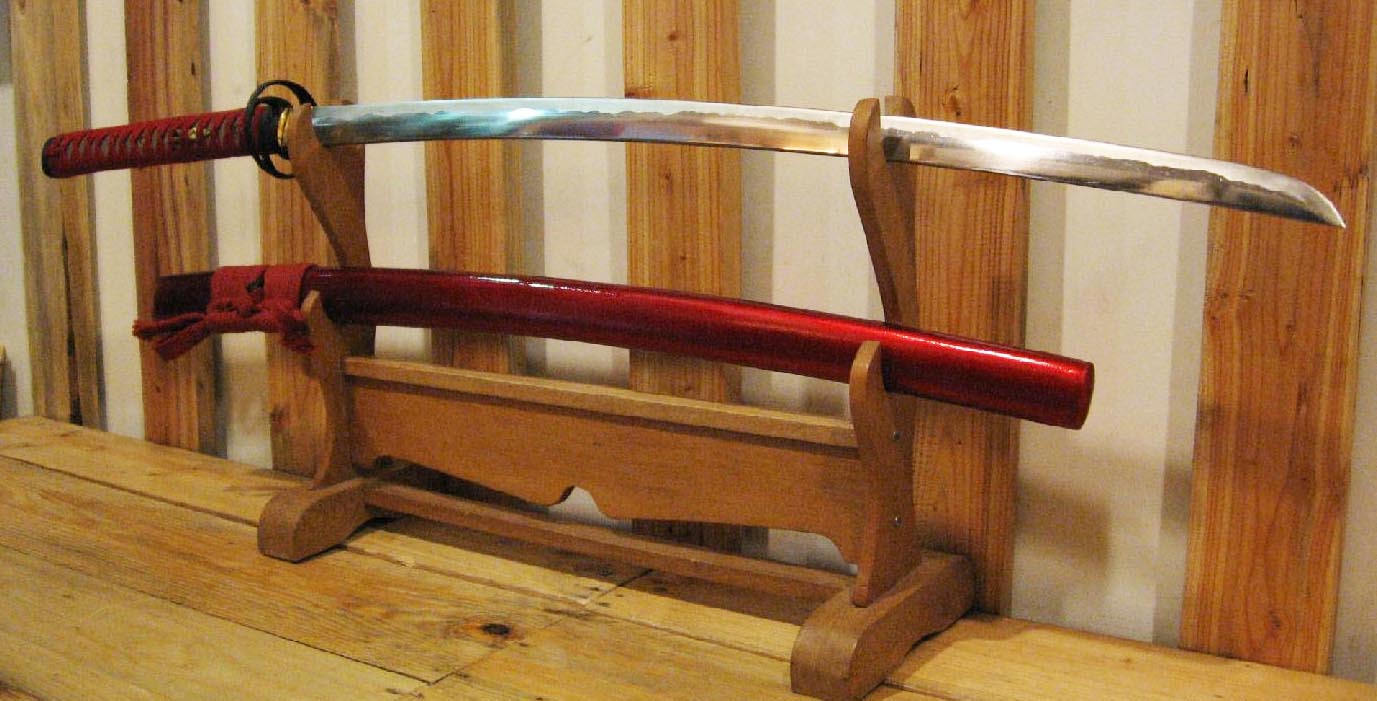 One good sword starts you on your way..

Or at least, it seems pretty good to you at the time..

It's a lot of fun to cut a water bottle for the first time - 'like a hot knife through butter' and you come away with a new feeling of respect for this 3' length of steel - tinged with a little bit of fear of it too if you are sensible.

You put it on display somewhere - buy a sword stand for it. And couldn't help but notice some other cool looking swords on the website - but they are a bit out of your budget.

So you settle with the stand.. But while you love your new sword and all your friends are curious and ask you 'is it real?' (or give you a weird look, don't worry - those friends will be gone out of your life pretty soon) - you feel a bit restless, and then that sword you occasionally drool over when you are at work is suddenly on sale..

Your Journey Into Extreme Sword Collecting is About To Begin..!

6 months later, and that cool sword you bought has cousins -and that sword stand has turned into a rack.. 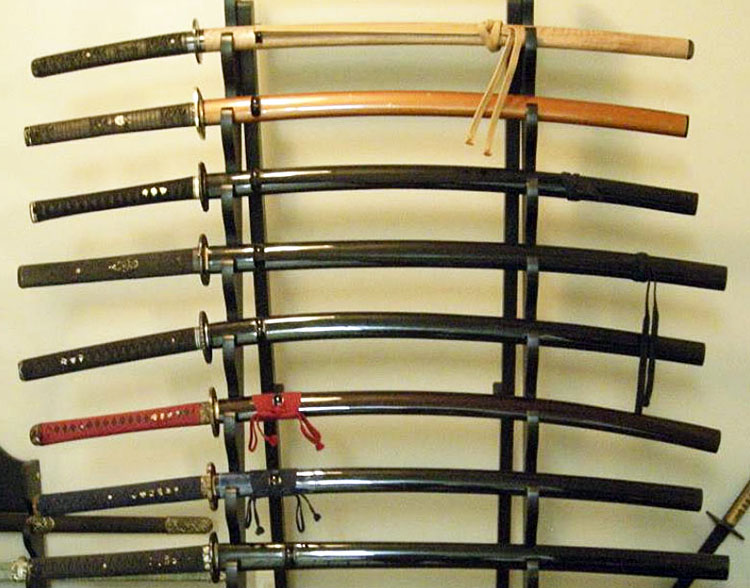 12 months later, and you start to worry if you might have taken this initial journey into sword collecting just a bit too far. Your significant other seems to think so..

A sizeable but actually rather inexpensive collection of Katana - most there are between $50-300.

But it's okay, even though you have a whole rack of swords, most only cost around $50 or so, though you did splurge out on some nice hand made ones, but never more than $300. Almost all of them are good so far, a couple were as blunt as butter knives and there are a couple that make a weird creaking sound when you swing them, but it's all good.

And then sometime, somehow - you stumble upon SBG - and see a review of one of the swords you purchased yourself in the reviews index. Looks like whoever reviewed it could have been talking about your sword, so you dig a little deeper - find a fix for that creaking handle in the maintenance section, and discover new brands and new swords you never even knew existed..

Such as medieval swords, start finding some sword types you like in the Oakeshott Typology - and before you know it, you have - as sword collectors like to put it - have come over to the dark side.. 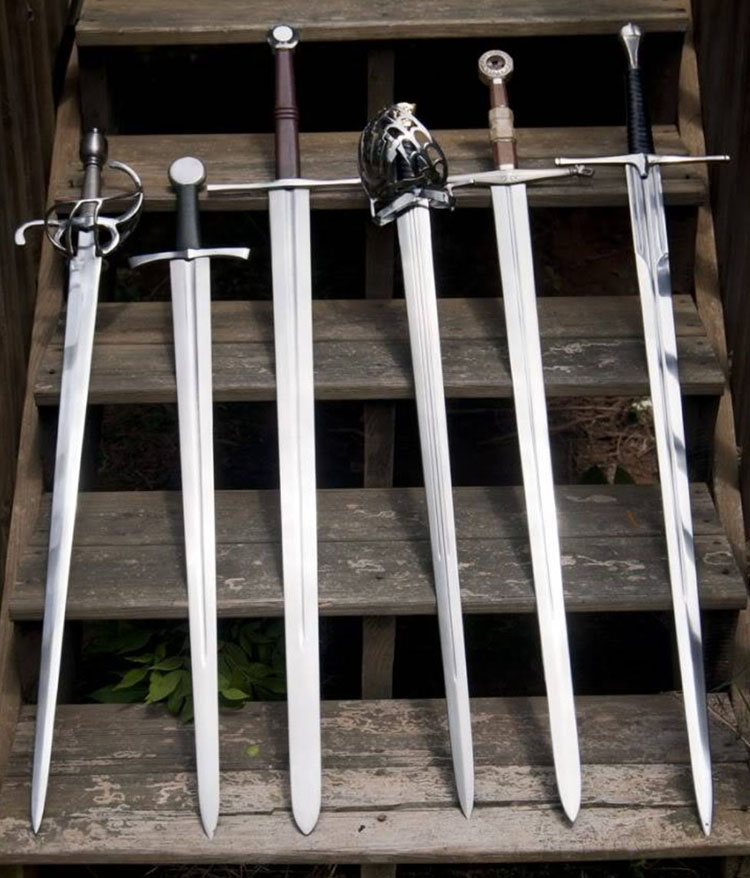 They look like they cost a fortune right? But actually most of these swords are from Windlass Steelcrafts and can be picked up from $150 to $300

You end up selling a few swords and trading a few on in the classifieds of the various sword forums - buy a few swords above the $300 just to see what the difference is, and before you know it you now have a very interesting and well balanced sword collection.. 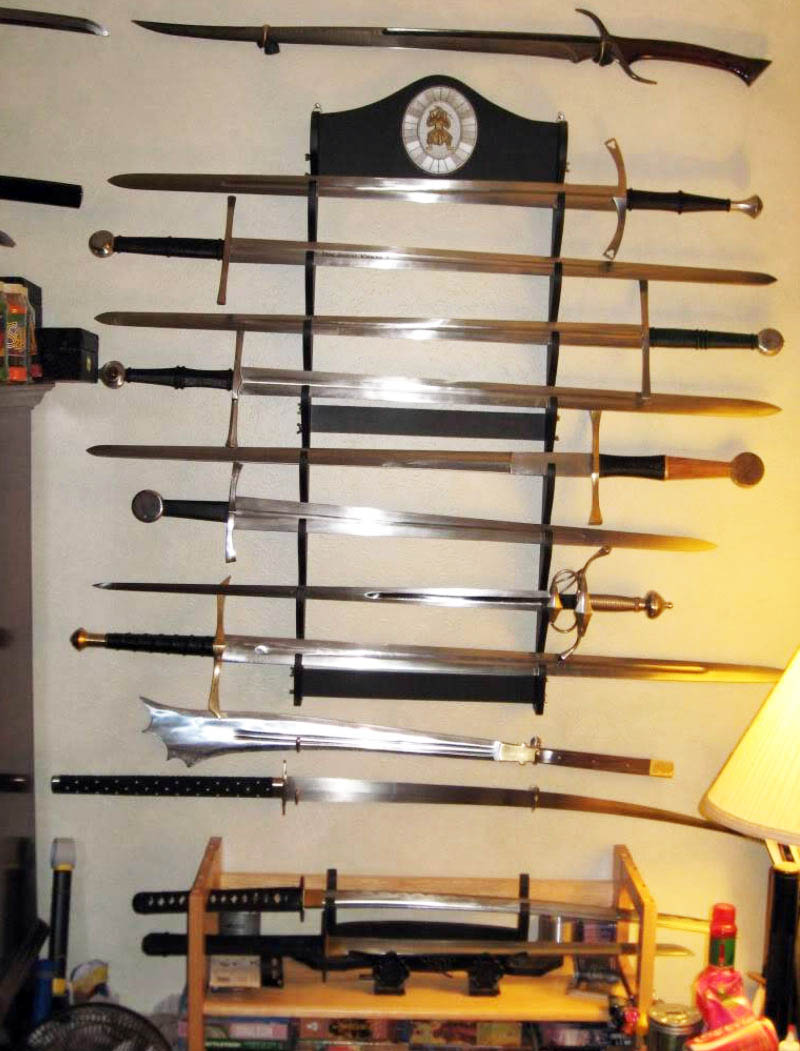 A nice varied collection - most still well under $300 each 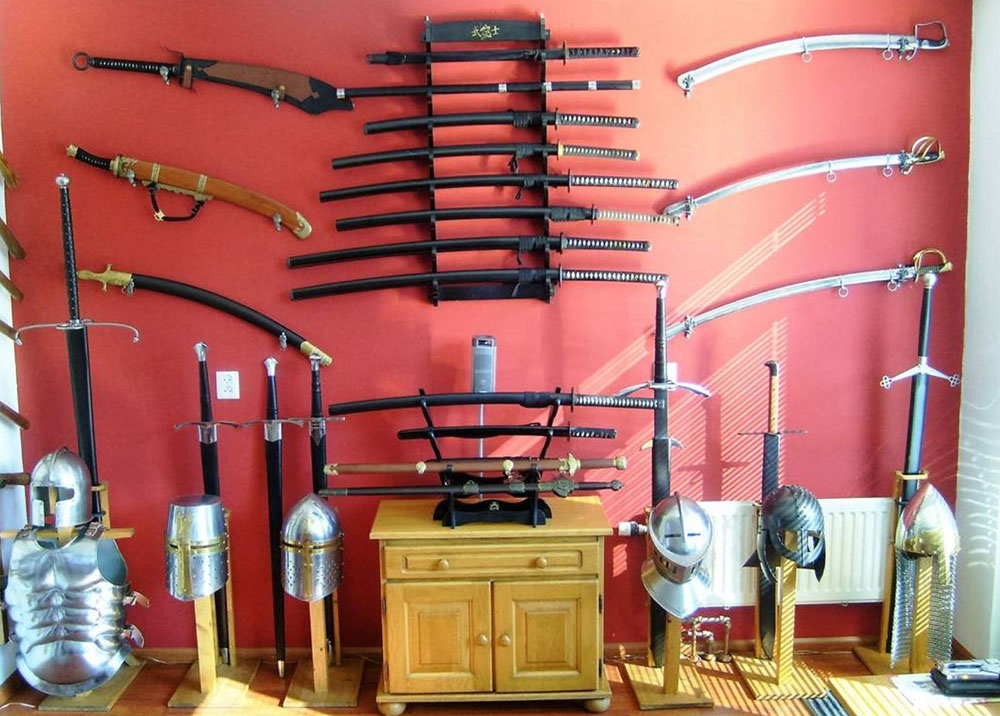 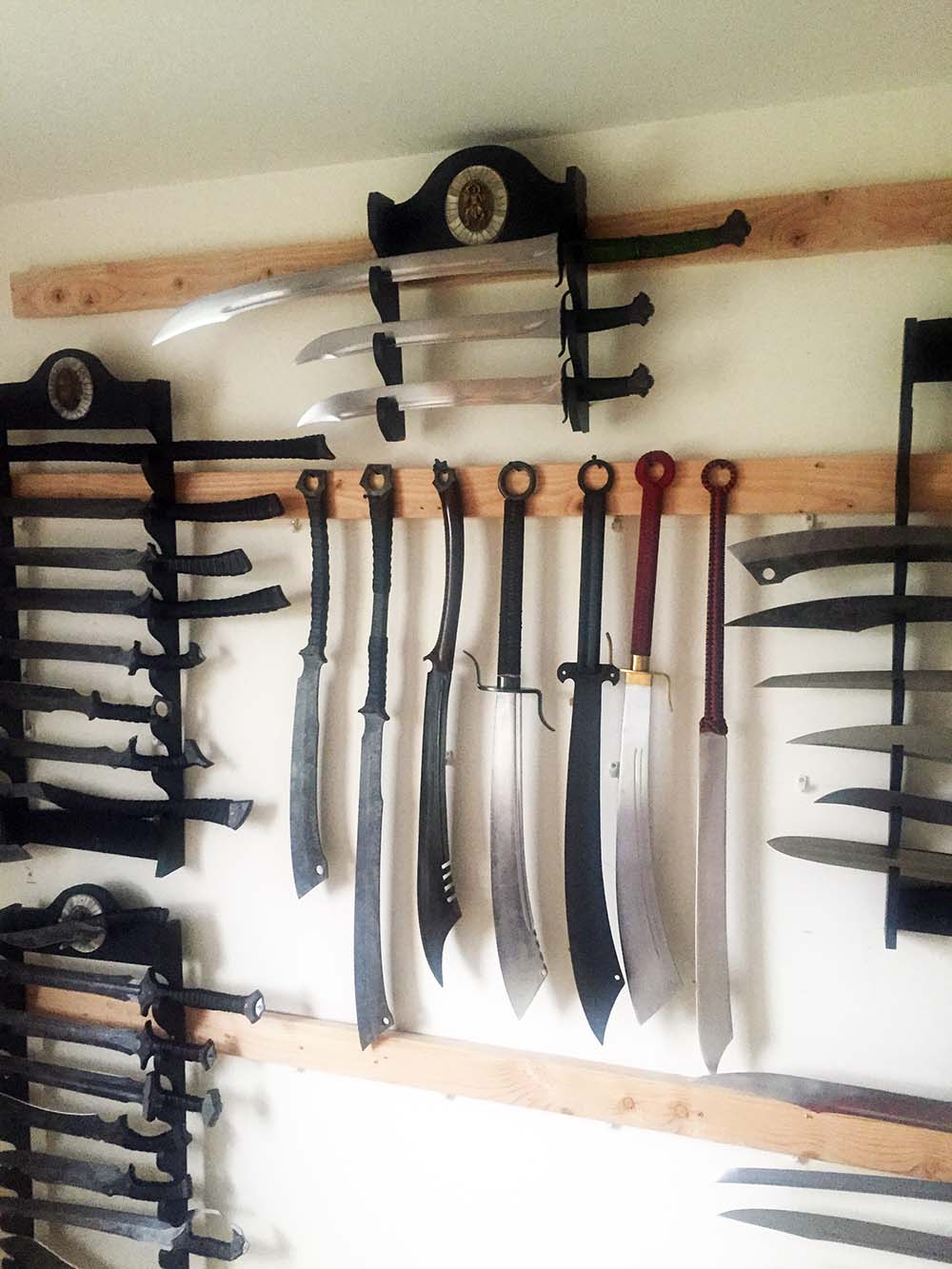 By now you are pretty heavily into collecting - and have used the reviews on SBG to consistently get good swords and know what to expect when they come in. And that one time you got a lemon, you get to experience some surprisingly good customer service because you stuck to buying from vendors listed in the sword buyers directory

And then, one day - for whatever reason - you decide to get a custom made sword by an artisan in Australia. You put it in a nice display case, and everything changes.. 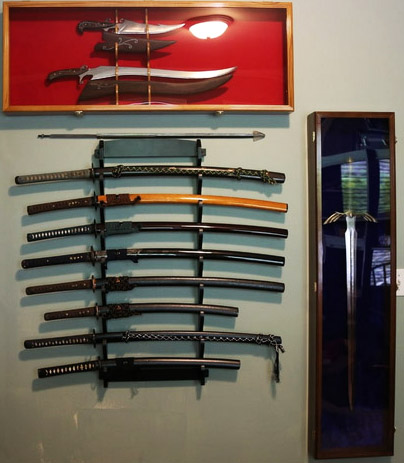 But that's nothing.. Let's take a look at some examples of what EXTREME Sword Collections REALLY  looks like..

To most people who don't buy swords, anything more than one sword counts as extreme collecting.

Well, let me educate you..

THIS IS EXTREME SWORD COLLECTING! 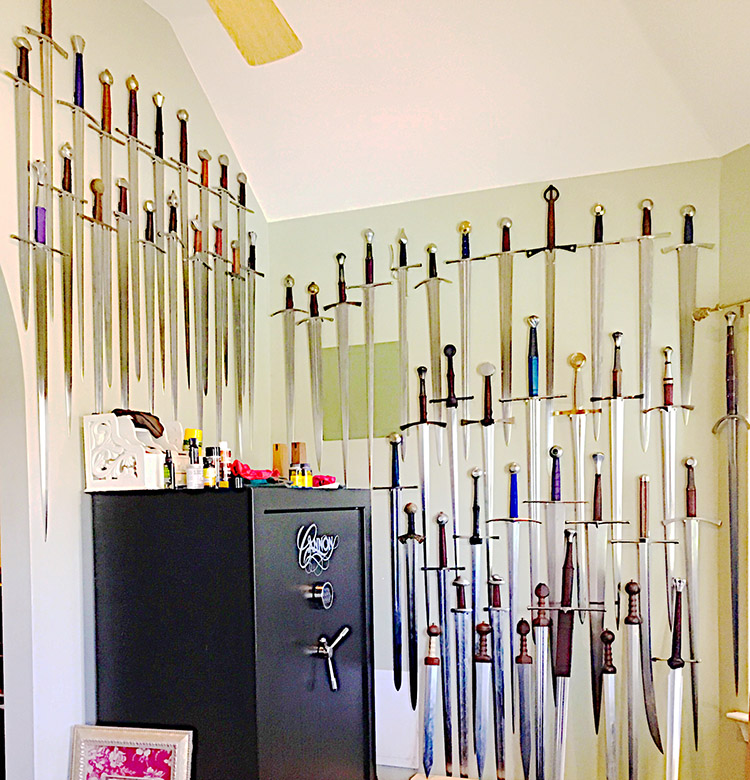 There are 58 swords in this picture - all of them European medieval or Ancient Roman sword replicas. But that is not what makes this an example of extreme sword collecting..

Each and every of these swords are ALBIONS - and Albion Swords are high end blades that typically cost between $1000 to $2000 each..

You do the math..

But we are just warming up.. Look at this next picture.. It is one of my favorites..

These swords are originals by none other than the late Jody Sampson, one of the best sword designers and makers of the 20th century and the gentleman who designed the original Conan the Barbarian Sword.. Easily worth more than all those Albions...

While these are pretty good examples of extreme sword collecting, we can do even better.. How about if we combine quality with quantity and throw in a large amount of variety..

How would you like to wake up every morning to the sweet smell of steel and oil with a collection so big that it causes a magnetic anomaly for a 5 mile radius.. 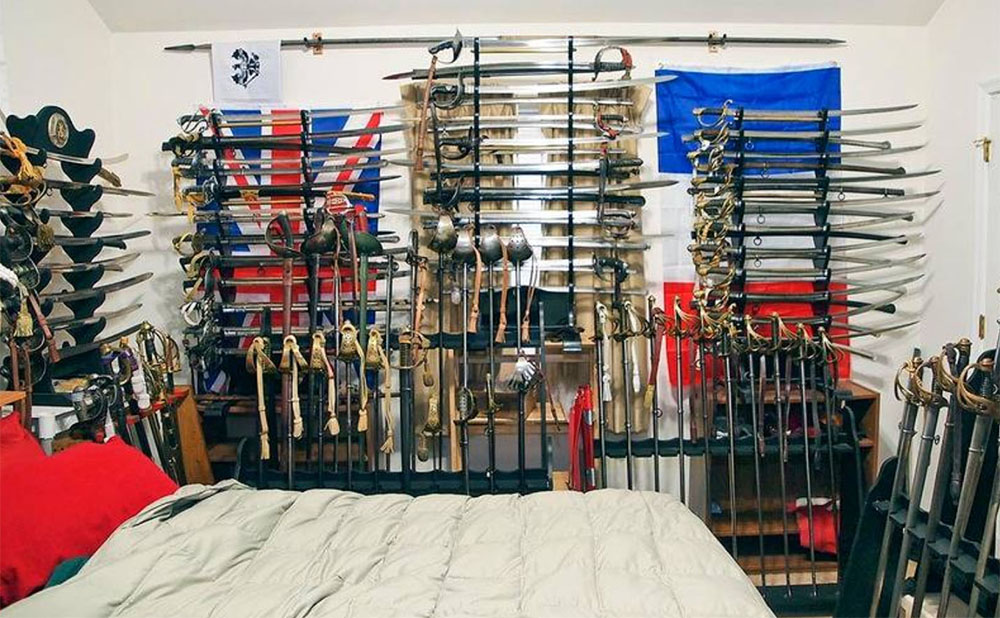 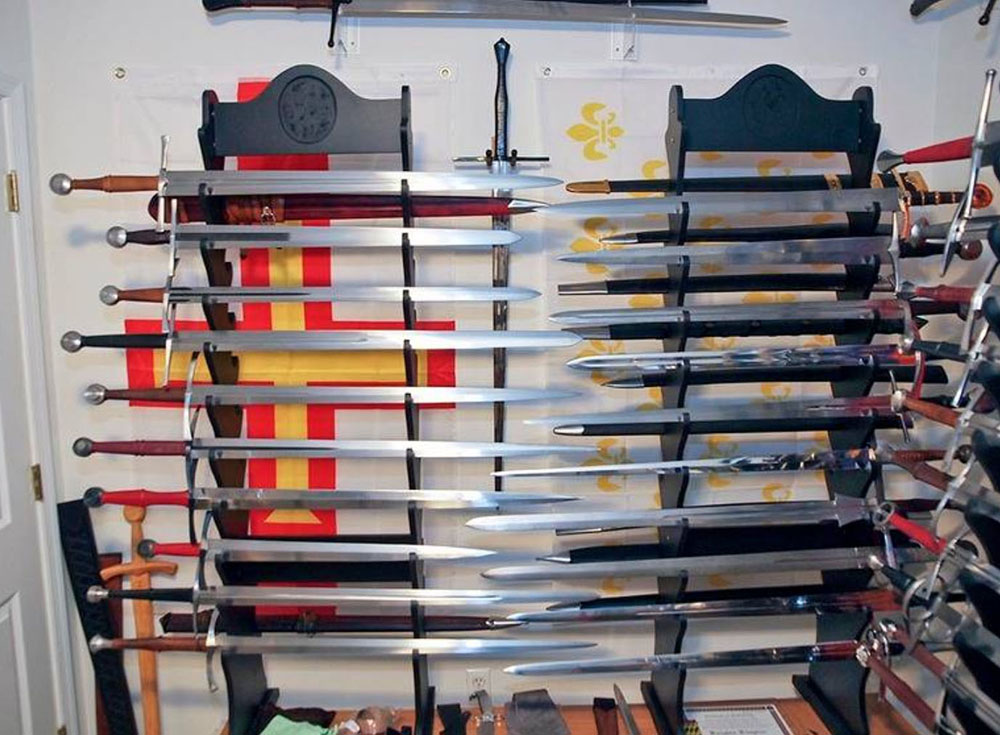 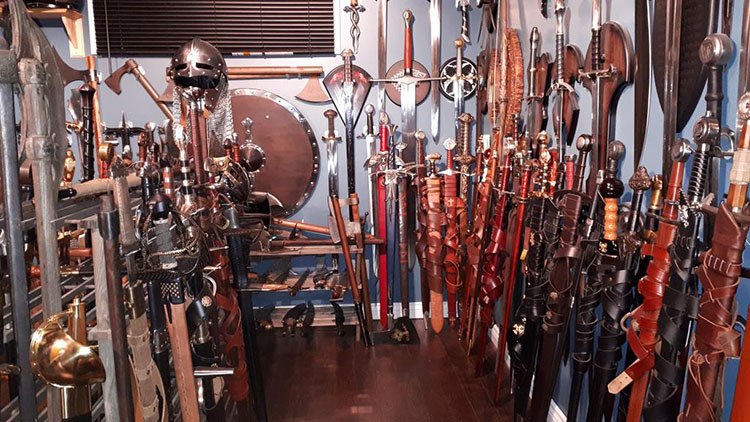 Sword Collecting for the rest of us

Collections like these take many, many years to build up - and especially if there are antiques, Albions or custom swords in there, can cost a small fortune. So while most of us can only ever dream of such grand collections, here are some more subtle ones - collections that have been carefully put together and (hopefully) won't cause your significant other to deliver the ultimatum 'it's me or the swords' (to which the only answer is of course "I will miss you honey")..

Sometimes just a sword or two in the right place can make a room seem so much more classy.. 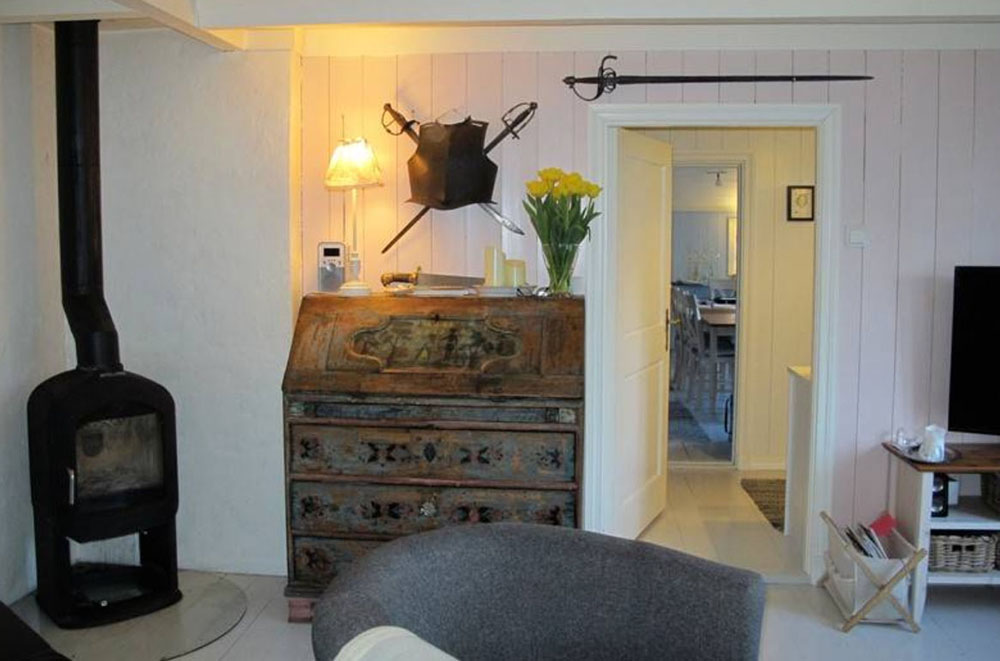 And NOTHING makes a hallway look nicer than some swords mounted in glass display cases (preferably with a small hammer and sign that reads 'in case of zombie outbreak, break glass') 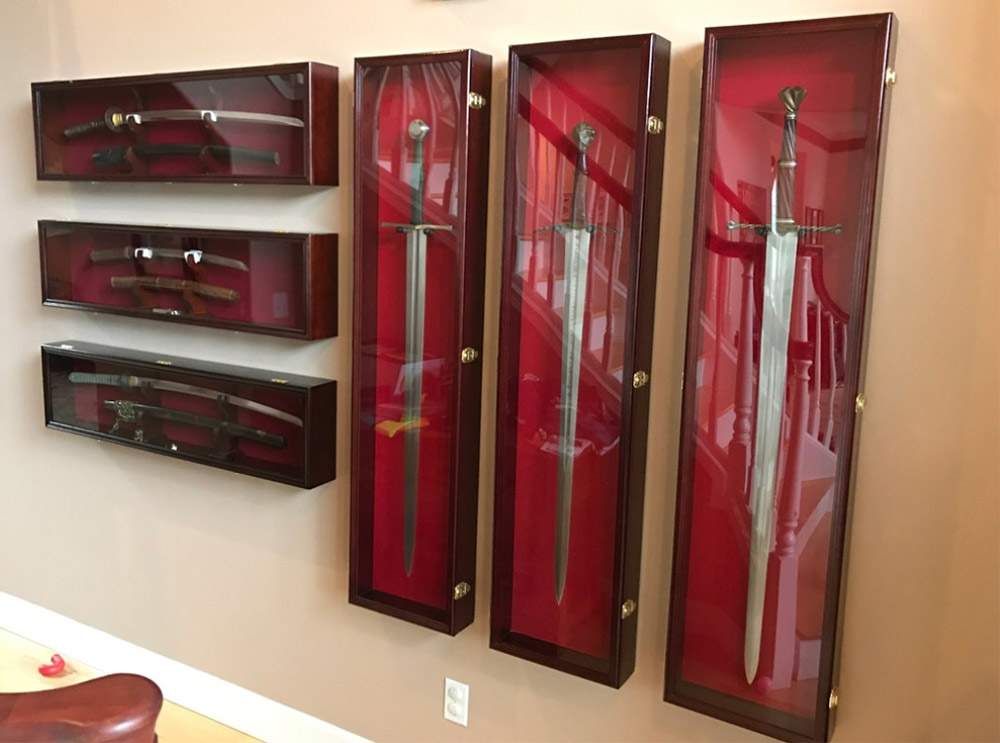 Some swords placed in the right spot and surrounded by the right decor can make a study look so much more enticing.. 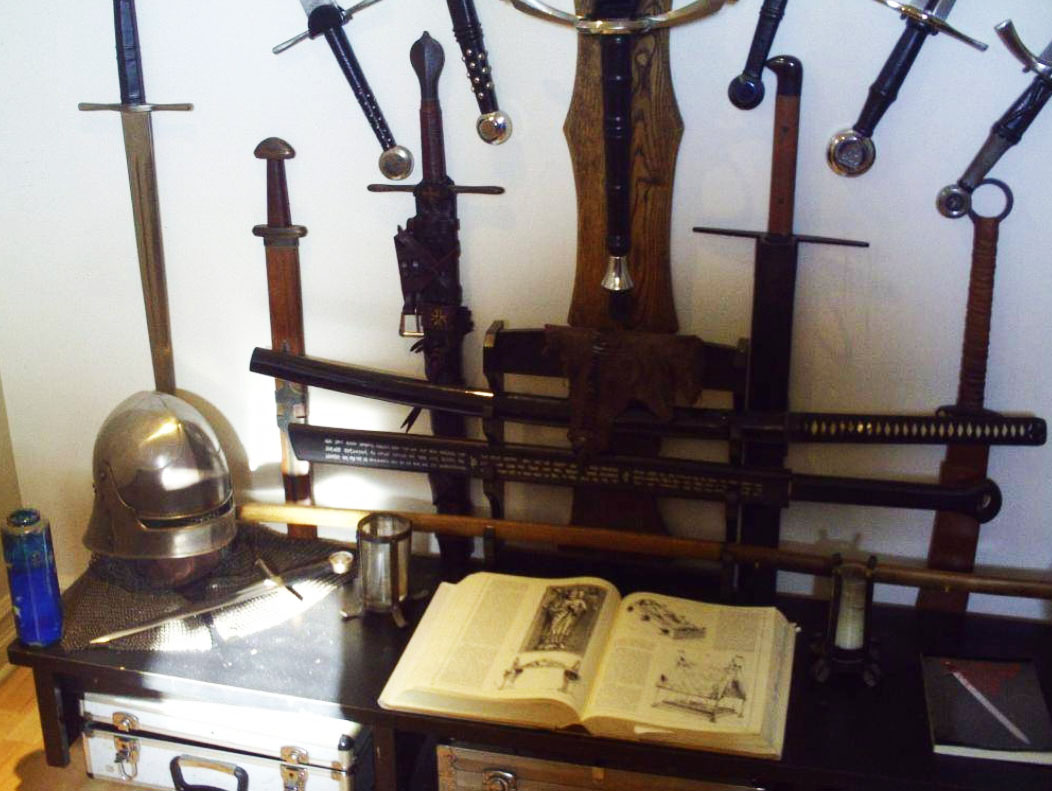 Of course, as you can see this collection is starting to head towards a case of extreme collecting. And in the more subtle examples above, there is almost certainly a dirty little secret or two (or three, or fifty) somewhere out of sight.. 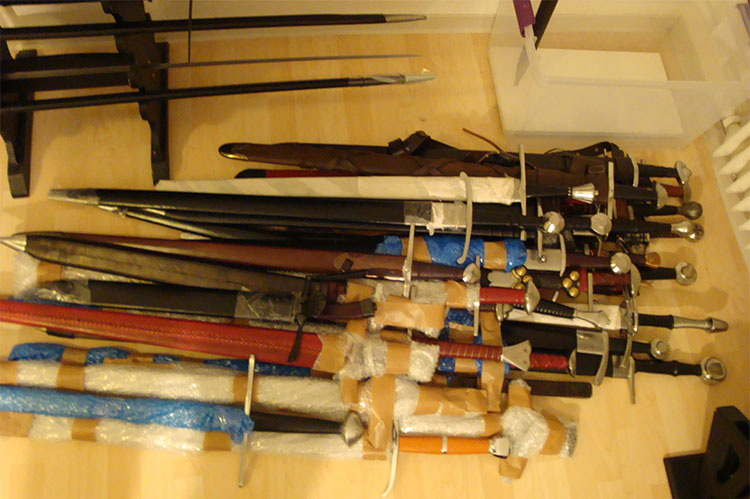 Yes, sadly there is no known cure for sword addiction - only prevention. Don't buy that first good sword - that's the only way. But I suspect that if you have come to this page, and are looking at the reviews and info on SBG, it is already probably too late..

I hope this gallery of extreme sword collecting has been entertaining and inspiring. To return to the SBG homepage from Extreme Sword Collecting, click here