The Samurai Sword - a Guide For TOTAL Beginners

The Samurai Sword, known as a Katana, can be a study that lasts a lifetime. The more you learn, the more there is to learn - and even though I have studied it for over 2 decades, I still consider myself to be a beginner..

But for those of you who are taking their very first venture into the world of Japanese styled swords and feeling understandably overwhelmed, HERE you will find everything you need to at least get a basic, well rounded understanding of how they are made, how they are used, and what makes a good or a bad one..

Simply pick a category you wish to learn about first from the options below.

To further investigate the world of the Samurai Sword, select one of the 4 broad categories of Katana based on price and intended function.

And for those of you for whom only the best will do, click here 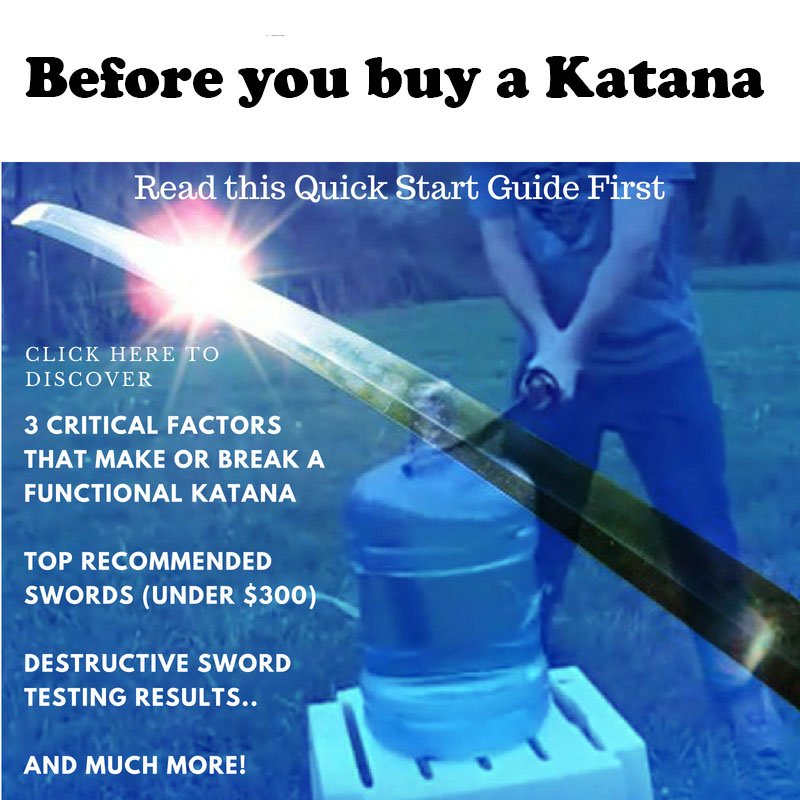 A few Myths regarding the Samurai Sword

There is no doubt that the Samurai Sword was a fearsome weapon, but over the years, thanks in part to anime, Hollywood and old tales that get blown out of proportion, there are many myths surrounding its construction and use.

So to ensure you have the best grounded introduction possible, lets blow a few of the more common ones out of the water..

Back in the old days, Japanese iron was of very poor quality (basically pig iron) and it was hard to make a decent blade out of such low quality raw materials. So to help even out the carbon content, the blades were folded several times - with each fold doubling the number of layers. While this may result in thousands of layers, it was not actually FOLDED thousands of times.

These days with the purity of modern steel being close to 100%, such folding is completely unnecessary and may actually WEAKEN the blade compared to if it was not folded! Click here for more information on folded steel blades

Actually, this myth was originally attributed to the original Damascus steel blades (Wootz Steel) not Katana. Indeed, many people tend to think that because the Katana is so good at its specialized role of cutting human flesh and bone that it must be RAZOR sharp. But in truth, the average kitchen knife is considerably sharper than a Katana - and most of their cutting ability comes from the hardness of the edge, the overall geometry of the blade, its mass, speed and the LEAST important factor, how sharp it is..

A Katana can cut through a Machine Gun Barrel

Nope, never happened and never can.. Steel is steel is steel, there is nothing magical about it. And while a Katana certainly CAN relatively easily cut off a head or a limb, it would barely nick a machine gun barrel. Same thing applies to cutting another sword in half, the only way it could happen is if the target sword is so poorly made or brittle to begin with that ANY sword would break it.

The Katana could not be sheathed unless it had drawn blood

No, that's not the Katana, but this myth is actually attributed to the Nepalese Kukri. However, as anyone who has ever spent any time with the fearsome Gurkhas will know, they use their blades for all manner of day to day activities and aren't cutting themselves every time they chop some fire wood. That said, there was a common belief that it was unwise to actually draw a sword unless you INTENDED to draw blood, and partially drawing a sword and displaying it was a common way of letting someone know they had better back off..

The Samurai Sword was super light weight and fast

Another popular misconception, the Katana actually weighs about the same as any other two handed sword (between 2-3lbs) any lighter and it will lack the mass to cut properly. Any heavier and it will be too slow in recovery time - miss once, and its game over..

A Katana could cut a person clean in half

Actually, this one is partially true.. Back in the day, Katana were tested on the bodies of executed criminals - sometimes stacking them one upon the other and cutting through the spine and soft midsection. With a well made blade, it was possible to cut through several bodies in this way. The record was supposedly 7 bodies..