This is much more than a guide to how to remember and pronounce Samurai Sword Terminology. Click on the name of a component for the full low down on what it is made from, how much it costs and common issues. Many of the words also have an audio option so you can listen to the native pronunciation.

It is basically learning a foreign language (Japanese to be precise), so you don't have to feel bad if you cannot tell your Kashira from your Kissaki.. (butt cap to the tip to translate!).

Having spent several years living in Japan I came up with some tricks to remember the language. And the good news is, most JAPANESE PEOPLE don't know Samurai Sword terminology, so if you can remember just a few you are way ahead of the game..!

Here we will break it down into three bite sized chunks, and I will give you some tips on how to remember what all the bits and pieces are called..

So let's get started with..

Ok, let's start our journey into Samurai Sword terminology with a picture.. 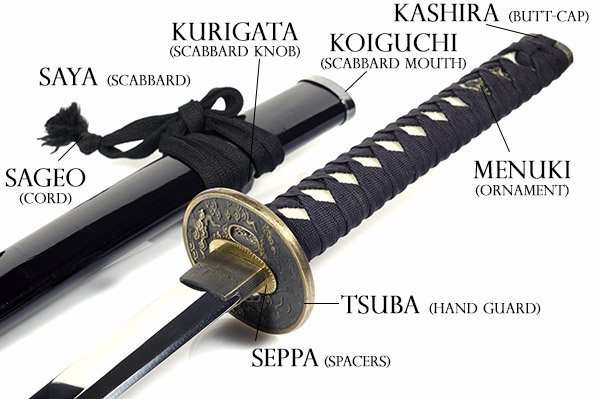 KASHIRA (Butt cap): We already covered this one. Kashira to kissaki remember? And the Kashira is the end bit, the butt cap.. Think of it as shaking your money maker - KASHira..

MENUKI (Ornament): With so many different possibilities, you need a MENU to remember them all.. The Menuki can be almost anything, from dragons to warfans to - well, anything - but usually fit a central theme.

TSUBA (Hand Guard): Most people know this one. It's usually the central theme of a sword. No special memory tricks required. At least I hope so, though the same word also means "spit" in Japanese. Though the meaning is clearly different in this case.

SEPPA (Spacers): If you watched "Shogun" or know the other word for Hara-hiri, SEPPuku, imagine a Samurai sticking his sword so deep into his belly that he buries it right into up to the SEPPA(ku). There are two spacers on a single sword, one each side of the tsuba. How far will he go is up to your imagination..!

SAYA (Scabbard): The whole of the scabbard, which is made of wood and easy to remember.

KURIGATA (Knob): Traditionally made of buffalo horn and which the cord ties around. And okay, I don't have a trick way to remember this bit of Samurai sword terminology other than - K for Knob and K for Kurigata. Enough said. Keep on truckin..

KOIGUCHI (Scabbard Mouth): Sounds a lot like an ex-Japanese prime minister with lively hair. He swallowed his foot a few times in his career, and probably a sword or two as well. Many are made of wood, but traditionally were usually buffalo horn (Saya that is, not Japanese prime-ministers).

SAGEO (Cord): You need to be somewhat of a sword SAGE to be able to tie the darned thing to your O-bi (belt) or in that fancy knot that is OH so hard to do..

Next picture and moving right along.. 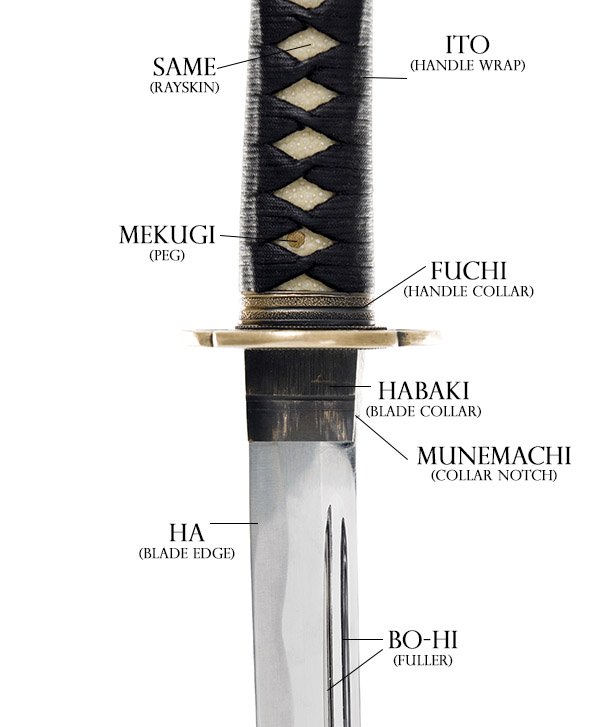 ITO (Handle Wrap): IT's OH so tough to tie properly.. But the ITO holds the handle together using Hishigami (like Origami) - folded paper triangles, to guide correct placement. At least, it does on expensive swords - can be a bit haphazard on lower cost models.

The word for Rayskin is the SAME as the word for Shark in Japanese. But the meaning is not the SAME. And neither is the way it is pronounced. It is pronounced, Sah-may. See, not the same at all..

MEKUGI (Peg): Okay, I am drawing a blank on how to memorize this bit of Samurai sword terminology. Instead, just remember to keep it in at all times - many have two these days but they only really need one as a good sword is properly friction fitted and the Mekugi is just a safety net. So that is why most these days have two..

HA (Blade/cutting edge): Don't laugh at the blades edge. While Katana aren't as sharp as a straight razor, they sure can cut and it is no laughing manner.. Ha. Ha. Ha.

HABAKI (Blade Collar): Don't laugh at the blade collar either, even if this example is from a Baka! (Baka means "idiot" in Japanese). Some call it the heart of the sword and it is how it sits in the saya nicely.

MUNEMACHI (Collar Notch): Not to be confused with the Muromachi period, the Munemachi is where you measure the length (Nagasa) of the blade, from this notch at the back to the very tip (Kissaki).

BO-HI (Fuller): Best to remember how to say it and what it is for than anything else.  It is pronounced "Bow" - as in bow and arrow - "he" as in "he don't say it right". Not bowing and saying hello, but a "he" with a bow. It is used to lighten the sword and makes that satisfying wooshing sound (Called Tachi Kaze in Japanese).

Time to get to the juicy bit - we are nearly done..! 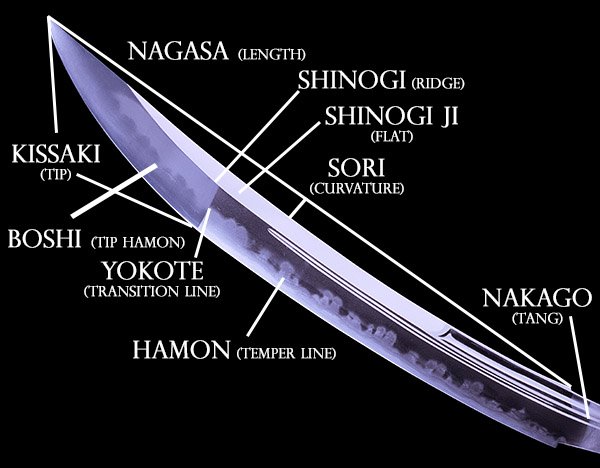 NAKAGO (Tang): Rather than memorize this specific Samurai sword terminology, just remember you don't need to oil this part of the sword. It should eventually get a protective black patina. It's a good thing.

SORI (Curvature): Sor-ree, I bent your sword. Actually, no need to be sori at all - curvature in a Katana is normal, and you measure it by drawing a straight line from the Munemachi (notch at the back) to the tip and measure the gap at the widest point.

NAGASA (length): We touched on this before, but Nagasa is actually a generic Japanese word for length. Nagai means long as "sa" is used to suggest the degree of something (i.e. Atsui is hot so Atsusa means, how hot/degree of heat). Measured from the Munemachi to the Kissaki..

HAMON (Temper line): Come mon..! You don't know Hamon? Really mon? Well, it is probably the most famous, HARMONious part of a Katana - the pattern line between soft spine (Mune) and the HArd cutting edge of the HA.. It should never run off the HA by the way - not cross the SHINOGI line into the SHINOGIJI.

YOKOTE (Transition line): Take YO COAT off for a well made Yokote. They are rare on production swords. Sounds like the Yoko in Yoko Ono.

BOSHI (Tip Hamon): Sounds a lot like the Japanese word for hat.. Which I guess it is in a way. Often not all that well done on production Katana. If it is, hats off to the smith! 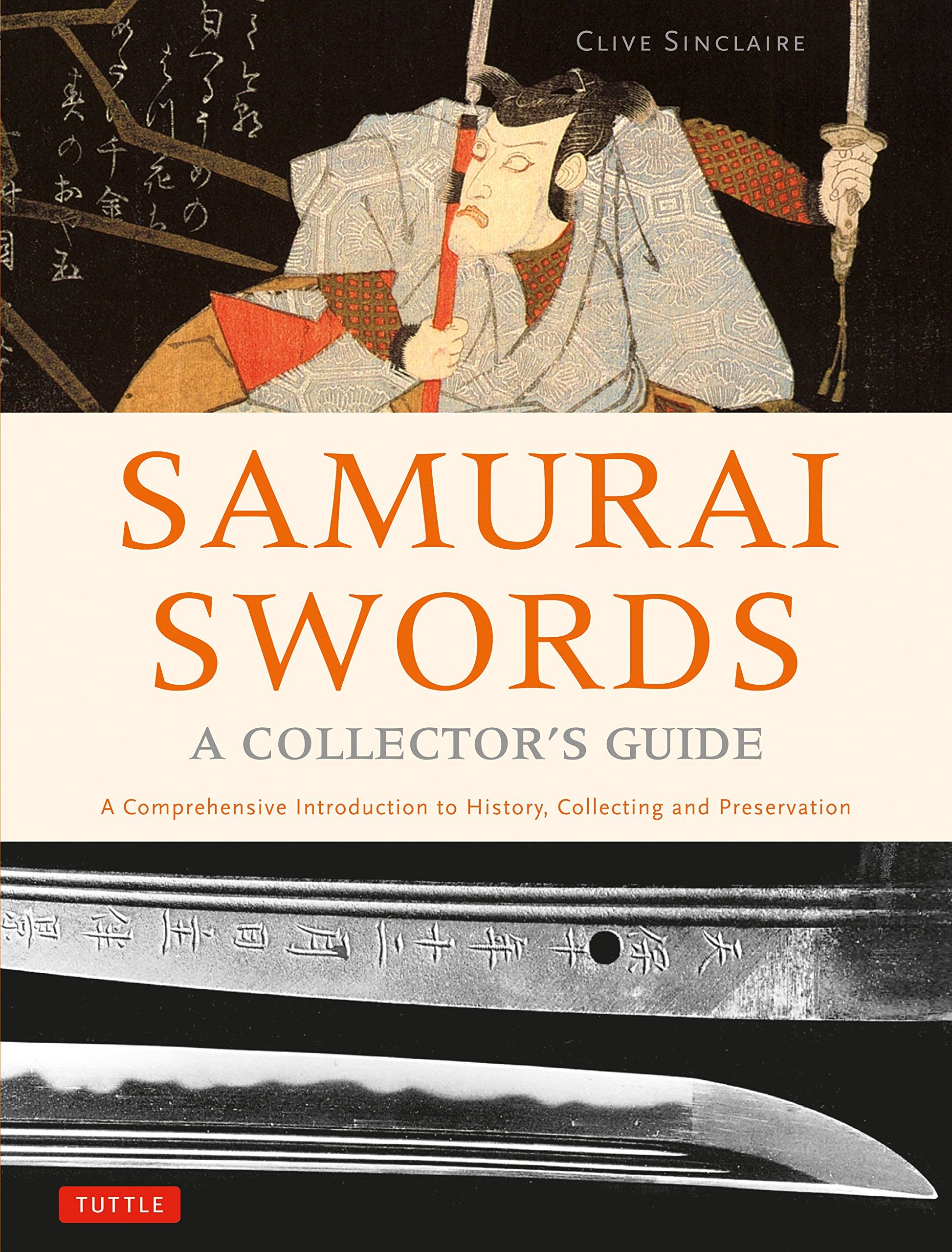 Ok, so our foray into the world of Samurai Sword terminology has been a lighthearted one. No doubt some scholars would strongly disapprove of the methodology, but as it is just the Kissaki of the iceberg, a beginner needs all the help they can get!

There are many other bits and pieces of Japanese sword terminology that we haven't touched on - but this is more than enough for one sitting, and covers the most commonly used terms in a way that is a bit different than usual and hopefully helps you remember at least a couple more bits of Samurai Sword terminology than when you started reading.

If you want to delve deeper, you certainly can. The best site to continue your journey is Richard Stein's Japanese Sword Index.