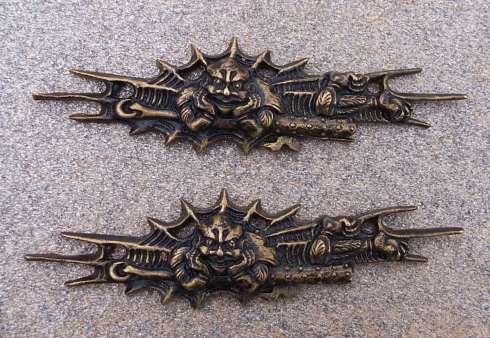 Menuki are a pair of small ornaments under the handle wrap of a Japanese sword with one on each side of the handle. As the Samurai forced anyone who was left handed to use the sword as if they were right handed, the traditional position of the menuki is such that the fingertips of each hand rest on the menuki as pictured below. 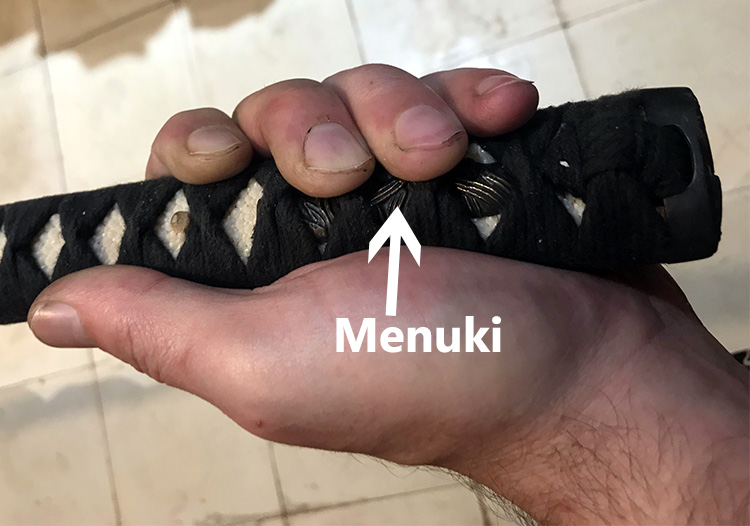 Almost all Katana are designed so that if you grip it in a right handed manner (right hand at the top and the left hand as pictured, at the bottom) your fingertips will touch the menuki slightly.

An alternative configuration is known as gyakumenuki (gyaku meaning "reverse") wherein the menuki are positioned the the other way around, so that the menuki fits into the palm of the hand when held with a standard right handed grip.

These days, which way the menuki are mounted is largely personal preference. Most people are used to the standard configuration, some find the menuki feels more natural and comfortable when in the palm of their hand.

Gyakumenuki are also sometimes desirable by left handed Japanese Sword Art practitioners, though others prefer the standard configuration as it creates the same effect as Gyakumenuki does in a right handed individual - with the menuki fitting into the palms of the hand. 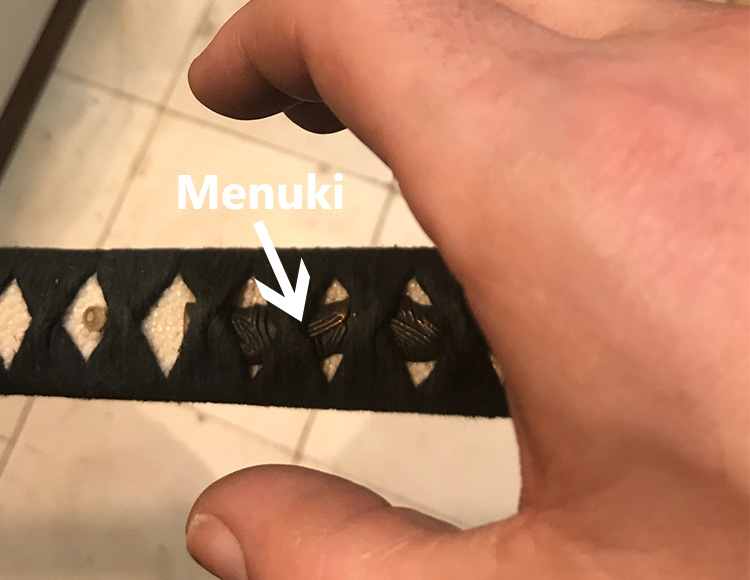 Left handed grip with the right hand at the bottom with a standard menuki configuration results in the menuki fitting into the palm of your hand.

So why is it that the menuki feel almost like they are the wrong way around and should fit ergonomically into the palm of the hand?

In a word, tradition..

Historically, the precursor to the Katana, the battlefield Tachi sword, had the ornaments positioned in gyakumenuki and was worn with the edge downwards. When the Katana came on the scene, the placement of the ornaments did not change for the sake of preserving tradition, thus the normal placement may not be as ergonomic as the gyaku configuration.

These ornaments come in a variety of styles, and are usually thematically matched with the rest of the fittings, though 'neutral' themes such as dragons or Japanese arrows, etc are not uncommon.

What Menuki are Made from, How Much they Cost and Common Problems

WHAT THEY ARE MADE FROM: Typically they are made of brass or copper, though more ornate ones can be made from silver or even solid gold. On extremely cheap decorative replicas, plastic may be used but it is not desirable, if only for aesthetic reasons (most people do not want a sword with plastic in it).

HOW MUCH THEY COST: Japanese made handle ornaments typically sell from between $165 to $300 or more depending on complexity and materials used. Mass produced ornaments are quite inexpensive, typically only $10 or so.

COMMON PROBLEMS: Probably the most common issue is that, as they are partially covered by the ito wrap, the details of the ornament may be obscured and it can be difficult to actually make out what is actually being depicted. 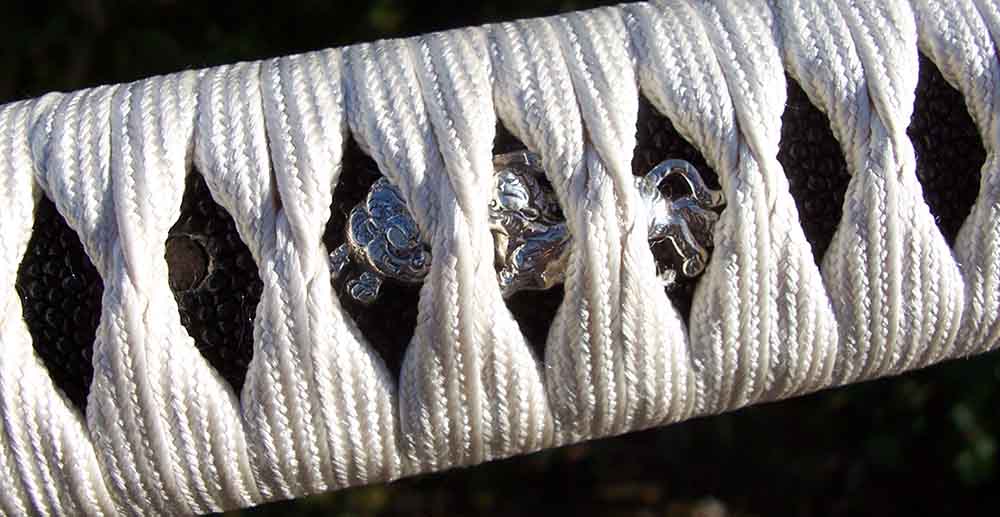 As most menuki are not actually fixed in place but rely on the tightness of the ito handle wrap (and actually contribute to the overall tightness) if the ito starts out or becomes loose with usage, they may shift slightly under the hilt assembly.

If it becomes an annoyance, they can be set permanently in place with a toothpick and some gorilla glue.

Alternatively, the entire handle assembly can be addressed by coating it in lacquer - several coats of varathane or polyurethane, thinned down and applied with a brush and worked into the hilt assembly with the hands, can provide a super tight finish to a loose ito tsuka.

I hope this information on menuki has been helpful. To return to Samurai Sword Terminology from Menuki, click here