"Damascus" steel swords are often hyped by less than honest sword sellers as the best thing since sliced bread. They often brag about how many thousand layers the sword has and many beginners fall into the trap of believing that somehow a Damascus blade is superior..

The sad reality is that, in many cases, it is the WORST possible choice for a functional sword, is NOT traditional and usually makes a sword considerably WEAKER..

But before we go into the nitty gritty of why this is the case, let us look briefly at the history of the term itself, and why - especially when applied to Katana - is just marketing hype.. 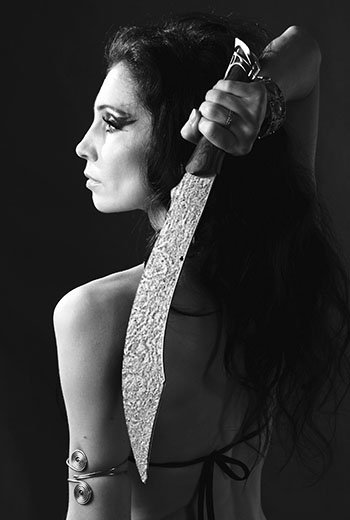 While it a marketing term applied to Katana, the term itself comes from the city of Damascus in Syria and refers more properly to Wootz steel - which was produced in India and exported to the middle East.

Wootz steel had some very unusual properties and its manufacturing secrets have been lost in the mists of time (the last true Damascus Steel was made in the mid 18th century). Swords made from this "ancient supersteel" were both flexible yet very hard, and a study in 2006 found they contained nanowires and nanotubes (click here for a detailed article on Wootz Steel).

How it was achieved is still not fully understood, but the fact is that true Damascus steel stopped being produced around 1750 - and the term itself was resurrected in the 1970s by blade-makers at the Knifemakers Guild show to refer to pattern welded and/or folded knives, which had the same kind of "flowing water" seen in the original Damascus steel swords..

So straight off the mark, the term is misleading and should really be referring to folded steel..

Pattern welded and folded swords are similar but different techniques and produce quite different looking patterns in the steel..

Pattern welding was first developed by the Celts and later the Vikings out of necessity. Steel in this period was filled with impurities so they would minimize the chances of an impurity causing a catastrophic blade failure by twisting bars of steel together and hammering them out, then folding and repeating to evenly distribute the inherent impurities and minimize weak points.

The end result was not only practical, but also quite beautiful, and was not lost on the Viking appreciation of aesthetics..

Close up of a pattern welded blade by Darksword Armory

Folded blades are, just as the name suggests, simply a bar of steel that has been hammered out flat and folded a number of times - each folding doubling the number of layers and creating a distinctly different pattern in the steel.

Most folded blades on the market are an attempt to replicate Tamahagane - the steel that traditional Japanese swords are made from..

Like with the Vikings, Japanese steel was extremely impure - and needed to be folded many times to try and even out the impurities. Unlike the Vikings, the actual Damascus pattern - the hada - was best appreciated if it was subtle and only visible upon close inspection.. 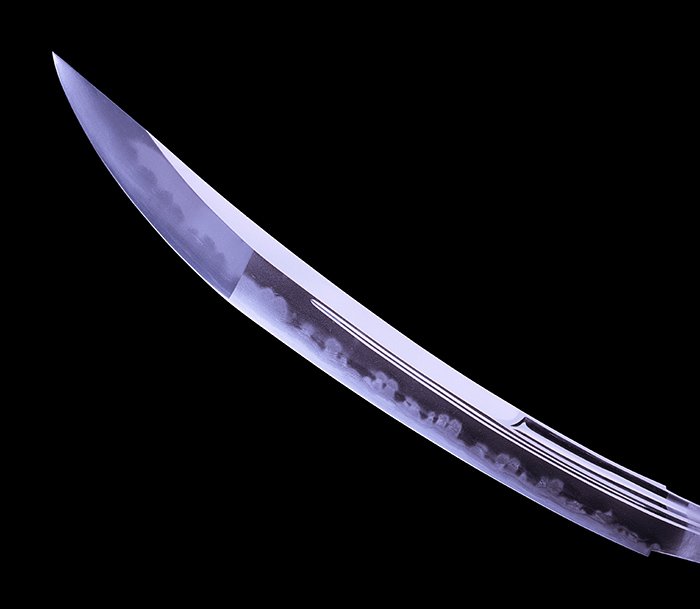 The hada (folded steel) on this antique Nihonto is subtle. As all real Nihonto are..

For the sake of preserving this traditional craft, modern Japanese made Shinken (Japanese made Katana) are still made using Tamahagane, even though modern steel would produce a better result as it has virtually NO impurities..

And this is where most beginners go wrong, they fail to understand that - as far as functionality is concerned - folding a blade does NOTHING to improve its durability, cutting power or anything else even remotely useful. In fact, more often than not - it RUINS what would could otherwise be a truly functional sword..

The BIG problem with folded steel

But the biggest problem is that the vast majority of folded steel blades today are mass produced by apprentice sword smiths who really could not care less if it has bad welds, air pockets, overly large grain sizes or carbon differentials..

Cross section of a folded blade, ironically marketed as a "laminated blade" (which clearly, it was not)

What this means is that the sword is more often than not, severely compromised by folding, and may tear, break or crack at any of the numerous weak points that poor folding practices creates..

As such, you can pretty much assume that any folded steel "Damascus" steel sword being sold under the $300 mark should be regarded as being decorative only and should NEVER be used for cutting (ironically, some unscrupulous sword makers use a stencil to FAKE the folded steel pattern - which, from a purely functional perspective, makes a better sword than if they actually DID fold it!).

No discussion of folded blades would be complete without mentioning that other often hyped process - blade lamination..

Like with folding, but even worse, low to mid priced swords that are laminated are quite simply unsuitable for use.. It takes an attention to detail that only a master smith has to do it properly, and the failure rate is two to three times higher than a simple differentially hardened blade..

Cheness Cutlery in the early days abandoned their laminated line because of this failure rate. Ryujin swords made them, but they were utterly useless and not added as an option to the SBG sword store (click here for the full review) and then many sellers who claim to sell laminated blades simply sell FOLDED blades that are not laminated at all..

As such you should be extra vigilant when looking at any sword that claims to be laminated. The only production laminated swords we have seen that are any good are Project X and the Ronin Katana Elite line - and these are $800+..

Anything in the $200-300 price range, steer WELL clear - you chances of getting a decent functional blade at this price point is about the same as winning the lottery..

The sad part is, most beginners have no idea about this - they assume that a "Damascus" sword is better quality than a non folded blade. After all, a sword with "THOUSANDS" of layers sounds like you are somehow getting something better - even though clearly some of these guys suck at basic mathematics..

Others get confused with how many times a sword is folded and how many layers it has. Fold a sword once and it has two layers. Fold it twice and it has four. But some claim the sword is FOLDED 14,000 times (which would take hundreds of hours and reduce it to powder) or I have seen swords being advertised as folded 10 times producing 2056 layers and 9 times to produce 1792 layers.. Hmm..

Many of the "Battle Ready Hand Forged Folded Damascus Steel Hand Clayed Full Tang Traditional Can Cut Iron Japanese Katana Swords" littering eBay really play to the Damascus factor, and claim it "removes impurities" creates "the balance between hard and soft" or other such nonsense when they should say "for decorative purposes only"..

Yes, you CAN get a functional folded steel katana. But they are never going to be as functional as a non folded steel sword. Even the high end Imperial Forge Kesshi Katana,($750-1,400), which is a stunning sword in its own right, got banged up on targets a more basic sword would easily shrug off..

A low end Damascus Steel Katana facing the same tests - I would not want to be anywhere near it when it breaks apart mid air..

At the end of the day, YES - it is possible to make a functional folded sword - just not on the cheap.

There is no doubt that Japanese made Nihonto are 100% functional, but this comes down more to the skill of the smiths and the level of effort put into the blade making process than the folding itself.

But they are STILL not as functional as a blade WITHOUT folding - it is, quite simply, an unnecessary step due to the quality of modern steel. And because it is so abused by marketers looking to make a quick buck at the expense of the truth, I call BS..

I hope this information on Damascus Steel swords has been helpful. To return to The Ultimate Guide to
Authentic Japanese Swords from Damascus Sucks, click here