The Kashira is the butt cap or 'pommel' of a Japanese Katana and is used to both secure and cement the ito wrap in place as well as sure up the entire handle assembly. It is usually made from, and paired with thematically, the Fuchi - forming a set called the 'Fuchigashira'.

In Japanese Sword Arts, the Kashira is sometimes used as a striking point in itself, delivered unexpectedly at short range, usually to the opponents face in preparation for a fight ending follow up.

Unlike the 'pommel' of a medieval sword, it serves no purpose to balance or counterweight the sword, but simply ties it all together and literally means 'head' in Japanese.

What Kashira are Made from, How Much they Cost and Common Problems

WHAT IT IS MADE FROM: Kashira are usually made from the same materials, and follow the same style, as the tsuba and the fuchi, often forming a set. The cheapest material is zinc-alloy, however as this is very brittle it is unsuitable for a cutting sword and only acceptable on extremely cheap, decorative swords.

Better versions are made from iron, steel, brass, copper or silver and can be simple or extremely elaborate with embossed gold and silver gilding, and usually follow a central theme. 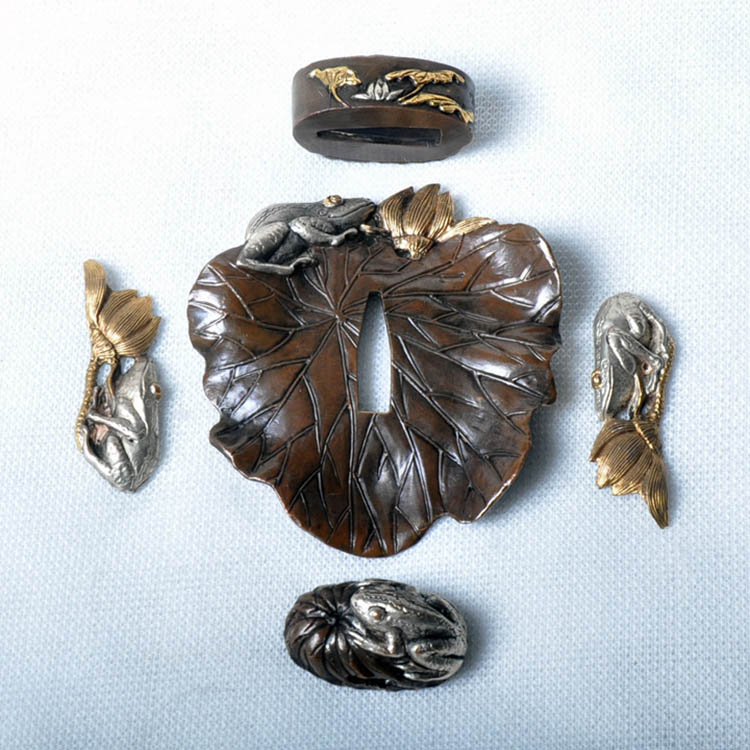 HOW MUCH IT COSTS: Usually sold in a Fuchigashira set, prices for Japanese made sets typically cost around $150 for basic blackened steel and go up from there. Chinese made sets range from a couple of dollars for a Zinc Alloy set to $75 for a complete set as pictured above, which includes tsuba and menuki ornaments.

COMMON PROBLEMS: The most common issue experienced is that the Kashira pops off slightly or wiggles as it is usually only held in place with some rice glue, and can easily break the bonds if the wooden core handle expands or contracts due to environmental conditions.

How far it comes loose depends on how tight the ito wrap is underneath. 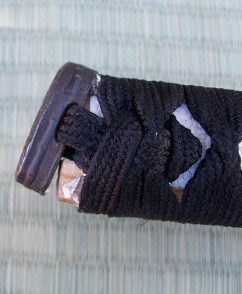 Thankfully, this is a very easy fix - a couple of dabs of gorilla glue under the gap and it should stay in place without any issue.

With zinc alloy butt caps, shock waves from cutting can easily cause the thin wall of the hole for the ito wrap to break, causing the whole thing to fall off and weaken the integrity of the handle. As such, zinc alloy fittings are completely unsuitable for a fully functional sword.

I hope this information on Kashira has been helpful. To return to Samurai Sword Terminology from Kashira, click here