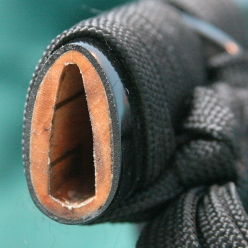 The Koiguchi is the part of a Japanese saya (scabbard) that mates with the habaki and sits the blade comfortably inside the scabbard. Ideally, it is reinforced to prevent the blade from accidentally cutting through the saya when quick drawing (iai).

When perfectly fitted, the sword can be turned upside down in the saya without falling out, but can be easily released from the scabbard with pressure from the thumb on the hand guard (tsuba).

What Koiguchi are Made from, How Much they Cost and Common Problems

WHAT IT IS MADE FROM: The inside of the Kurigata is part of the wooden saya and so of course is made from the same type of wood as the rest of the scabbard. The outside of the opening is ideally reinforced with buffalo horn, though steel, brass, silver, wood or even plastic is not uncommon (plastic being especially common on Japanese imported iaito, zinc alloy, unsharpened practice swords - so is not considered to be a safety concern, but certainly would be on a live blade).

Horn or brass is often considered to be the best option as they are soft enough not to scratch the blade when drawing/sheathing but strong enough to act as a failsafe if the blade is drawn from the sheathe too early.

HOW MUCH IT COSTS: A Buffalo horn Koiguchi or steel band fitting service can cost between $50 to $100 or so. Naturally, non reinforced variants are simply a part of the scabbard and incur no special additional costs.

COMMON PROBLEMS: Occasionally the traditional rice or pine glues used to secure the Koiguchi reinforcements to the saya fail due to atmospheric conditions, but can easily be reattached and fixed in place with wood glue or, even more securely, gorilla glue.

If the Koiguchi is not perfectly mated with the habaki of its blade, it may slip out, be hard to draw or rattle in the saya. Because mass produced swords are fitted on a 'closest fit' basis rather than individually made, some minor filing or shimming of the saya mouth may be necessary to achieve a flawless fit.

Over time, repeated drawing or leaving the sword in its sheathe undrawn for extended periods will also cause the inner lining of the mouth of the scabbard to wear down, requiring repair. All owners of Japanese swords should learn how to maintain their Katana - below is a short video on how to do this.

I hope this information on Koiguchi has been helpful. To return to Samurai Sword Terminology from Koiguchi, click here