At first glance, the nakago seems pretty straightforward and is simply the tang of a Japanese sword - i.e. the extension of the blade that goes into the handle.

However, as is fairly typical of Japanese swords, it goes a lot deeper than that - as this 'hidden' part of the blade often holds many secrets and stories and its quality can make or break a sword (literally).

Cheap decorative stainless steel Japanese swords usually do not have a full tang like that shown above, but instead have a spot welded rat tail tang which barely holds the handle and blade assembly together.

Still hot from spot welding, a typical rat tail tang from a decorative sword. It is quite fragile and definitely not strong enough to hold the sword together when cutting

Apart from its obvious function to join the hilt to the blade - the nakago is the designated, and rather humble, place on a Japanese sword where the makers mark or mei is engraved.

Not all functional entry level swords have or really need a mei signature, but it is extremely important on antiques and as s result should never be polished or cleaned up but must be left in its original condition.

'Mei' signature (makers mark) when it appears always can be found under the hood on the tang.

Indeed, it is a common newbies mistake to oil or attempt to polish the tang of a Japnese sword - traditionally you allow it to form a protective patina of black rust and should not be cleaned or modified in any way when disassembling a Katana for maintenance.

Just leave it as is and it will be fine.

But the hidden signature of the smith who made it is not the only secret of the nakago. Often times if you go to museums and check out real antique Japanese swords, you will find that some of them are riddled with holes called 'mekugi-ana' (holes for the mekugi pegs to go in) so much so that some of them look something like Swiss cheese.

An example of a Nakago with multiple mekugi ana from remounting.

This is because, when remounting, the position of the tsuba (hand guard) and areas of the handle ito wrap are different on each mount, so the same holes cannot usually be used. Because it was historically very common, modern sword collectors should not fear drilling a new hole in a nakago when remounting - indeed, in most cases it is unavoidable as no two mountings are positioned in the same place.

Common Problems with the Nakago

The most common issue with a Japanese swords tang, apart from the inherent fragility of rat tail tangs on decorative swords, is a poorly shaped nakago. 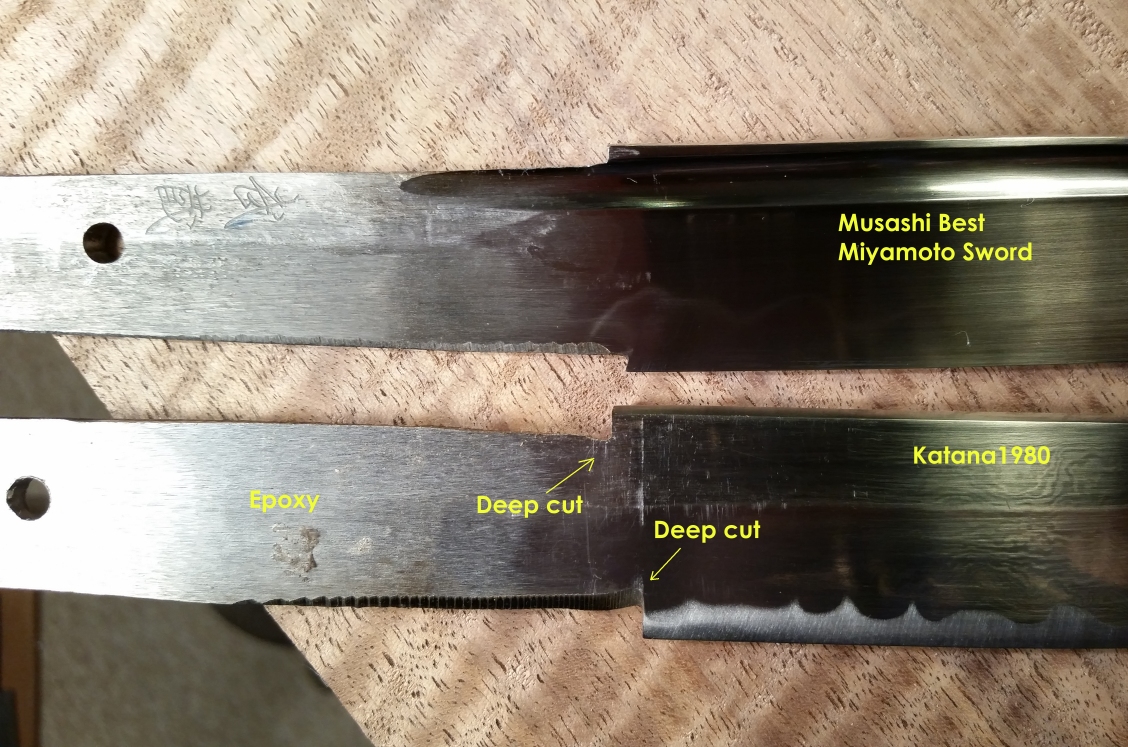 Such poor finishing under the hood can cause undue stresses on the rest of the blade, or even transfer shock directly into the tang itself - so much so that the end result can be something like - well, something like this..

The only way to avoid this kind of thing from happening is to:

A) Buy from reputable sources and manufacturers who address these issues at the source or..

B) Check each and every sword you receive to make sure that the tang is shaped as cleanly as possible with no obviously flawed or poorly finished section.

I hope this information on Nakago has been helpful. To return to Samurai Sword Terminology from Nakago, click here