Same, also called Samegawa or Samehada, is the Japanese word for stingray or shark skin and is a type of shagreen used to reinforce and bind the handle together, with the rough bumpy surface also helping to secure the ito handle wrap to the handle.

Because it is such a hardy material, it was able to withstand the rigors and demands of warfare while also adding to the aesthetic appeal of the sword.

What Same is Made from, How Much it Costs and Common Problems

WHAT IT IS MADE FROM: The product itself is a by product of the fishing industry, with the species of ray Pastinachus sephen (Cowtail Stingray) hunted for its meat, and the skin a by product of the process. Despite some concerns, the Cowtail Stingray is neither endangered nor threatened as a species and can be found in abundance in warm, tropical waters with no part of the fish going to waste.

A few sword makers have some models with a synthetic rayskin alternative but it is not particularly popular with sword collectors, who prefer the real thing. 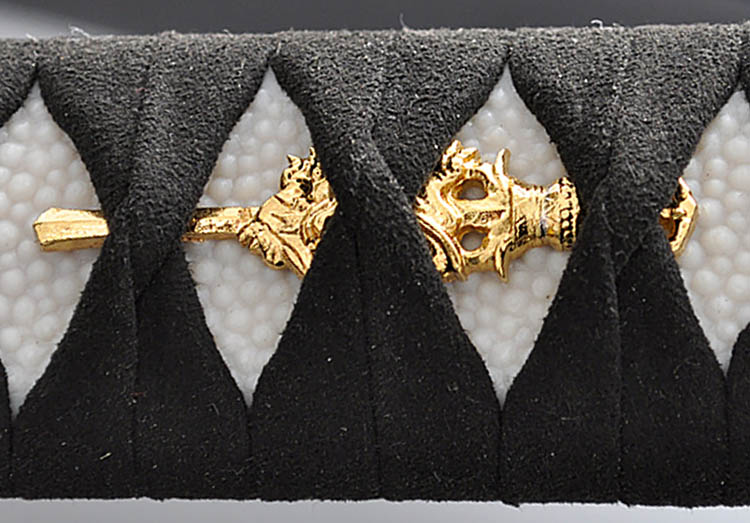 An example of synthetic Rayskin

HOW MUCH IT COSTS: Traditionally the same wrap covered the entire handle, but due to the cost (a single sheet of rayskin typically costs between $50 to $70) most production sword companies use panels set into recessed strips to save money while also gaining most of the properties of securing the ito wrap in place.

As it is usually possible to get 4 uses from a single sheet of rayskin when cutting panels, the cost goes down from $50 to around $12 for a single application. See the video below for more information on what it looks like and how it is used on Japanese swords.

COMMON PROBLEMS: Because it is quite expensive, off cuts and scraps are not wasted, and it is not uncommon on production swords for there to be small gaps between two smaller lengths to avoid throwing out material. Quality of the rayskin will also vary from sword to sword, some have quite thick and rich nodes while others may use an area of the skin that has much sparser node concentrations.

We hope this information on Same has been helpful, To return to Samurai Sword Terminology from Same, click here