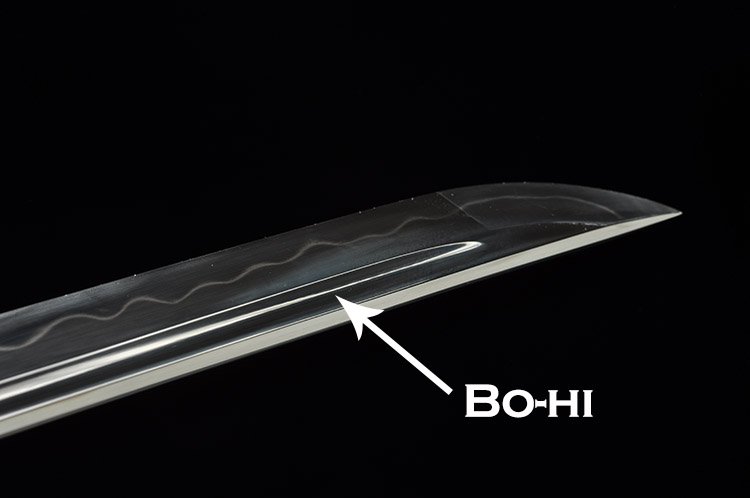 A bo-hi (also known as a 'bohi','hi', 'fuller' or 'blood groove') is simply a groove literally carved into the blade of a Japanese sword that helps to reduce the weight slightly without major sacrifices to its durability.

It achieves this in much the same way that I-beams in the construction industry reduce the weight of building materials with minimal loss of structural integrity.

In addition to reducing the weight of a sword (typically by 2-3 oz) it also ever so slightly shifts the balance point further towards the handle than it would otherwise be without one (typically around .5-1"). The end result of these adjustments to the swords weight and its balance point tends to produce a sword that is slightly faster in the hand.

As a trade off for speed, the lighter the blade and the more balanced towards the hilt it is, the less powerful its cutting action is and it is ever so slightly less durable (which is only really noticeable under extreme cutting conditions).

The final benefit of a bo-hi is that the groove tends to amplify the sound of the sword as it wooshes through the air, which in Japanese is called "Tachi-Kaze" (sword wind sound). How loud it is will depend upon the speed and correct technique of the practitioner, and so it is used as an auditory feedback device to let the sword student know which of their cuts were good and which ones need more improvement.

The Myth of the 'Blood Groove'

Some people have got it into their heads that a bohi or any type of fuller's main purpose was to allow blood to drain down the groove and to prevent suction causing the blade to get stuck in the internals of an opponent when thrusting to the body.

It sounds cool maybe, but it is just that - a myth. The only purposes are to lighten and shift the balance of the blade and produce audible feedback.

In addition to the standard full length groove that terminates either just before or actually under the habaki blade collar, there are several less common variants.

One such variant is the double bo-hi, which has two - shallower - fullers instead of one. However, from a practical viewpoint, the effect on handling is the same as a single, deeper fuller - the only difference is, it is perhaps more visually interesting.

Example of a double bohi

Another is a partial bohi, that is to say, a groove around 1/3 the length of the actual blade. 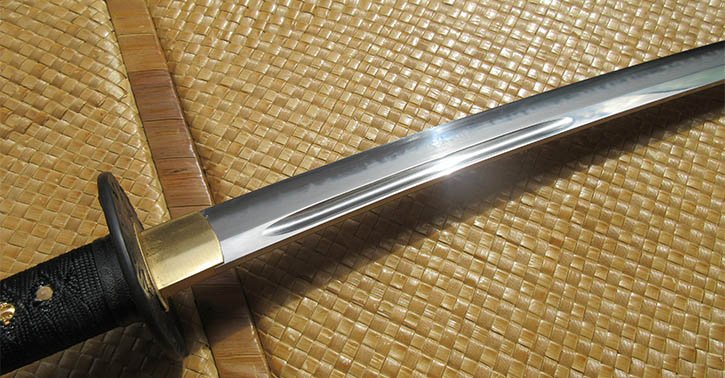 Example of a partial bohi

You can see the two types side by side below.

Left, a standard mass produced bohi and right, one that has been hand carved to follow the shape of the kissaki

To achieve this, it is necessary to hand carve the groove, which adds considerable time and expense to the swords production and few sword makers actually do this (though, as is quite often the case with production swords, this short cut is cosmetic only).

I hope this information on bo-hi has been helpful. To return to Samurai Sword Terminology from Bo-hi, click here