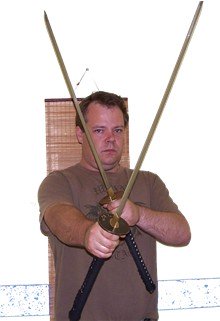 The most authentic Ninja sword on the market, the Cheness Oniyuri (demon lily) Katana is also one of the most functional and terrifyingly practical swords I have ever owned...

Based on the Togakure Ryu Ninja to  a sword belonging to the esteemed Soke Masaaki Hatsumi (founding father of the Bujinkan Federation) the Oniyuri was custom made at the request and to the specifications of some senior Bujinkan members to emulate this famous authentic Ninja sword.

Reviewed and highly recommended to Bujinkan practitioners in the 2006 Summer Edition of the exclusive ($19.95 a year) Bujinmag, the Oniyuri has since been released for sale to the general sword buying public.

And as you will see, this sword is both versatile, extremely durable and a whole lot of fun.

The Oniyuri is a very unique looking sword. And indeed, once drawn, the overall appearance of this 1/3 tsuka handle and 2/3 blade sword actually kind of reminds me of a short hafted Naginata (Japanese polearm)!

What makes it really quite interesting is the way the true nature of this authentic Ninja sword is hidden.. 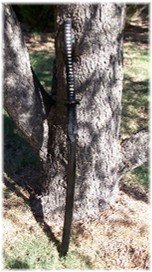 When you first open up the display box, you are greeted by what looks like a fairly normal Samurai Sword. True, with a 14 handle, it looks a bit bigger and more imposing than an average Katana.

But you would not imagine for a second that what is inside is effectively a quite unique looking Ko-Katana..

There are two reasons for this unique design, the first one being the element of surprise...

When you consider that, in the hands of an assassin who at first glance looks like any other passing Samurai, a sudden draw from an unexpectedly short sword would make it practically impossible for the Ninjas victim to react and clear their scabbard before this authentic Ninja sword has found its target...

But secondly, once drawn, because of this swords unique design it can be used in unfamiliar ways that would finish the Ninjas opponent before they realized exactly what kind of weapon they were up against.

This unique design gives this authentic Ninja sword a whole lot of versatility...

Not only can it be drawn with the right or left hand with equal ease, but perhaps most importantly, it can be used indoors or in a confined space where a normal length Katana would be inappropriate.

Yet if extra reach is required, there are numerous ways of holding it that can lengthen or shorten the blade in an instant.

Standard two handed katana grip proves the balance, feel, and cutting performance of a traditional full length katana. The strength of the long nakago extends deep into the tsuka. The easiest cutting grip.

Two handed grip choked upwards proves extensive leverage to power through heavier targets. With a bulk of the weight below your right hand, the blade feels almost weightless... allowing for fast changes in directions.

Choked up single handed grip lets you handle the blade at a point near its center of gravity. Blade feels lighter than a wakizashi and allows use in tight quarters where a katana cannot.

Single handed grip in the middle provides the same feel and balance as handling a standard katana one-handed at the tsuba. So you don't have to sacrifice the ability to practice and perform single handed cuts.

Single handed grip choked downwards to the end allows for a reach further than any wakizashi or even katanas when handled two handed. Very difficult to accomplish without specialized training.

Now as expected, the fittings of this authentic Ninja sword are plain but eminently functional  the hallmark of the Cheness line.

The 14 long tsuka is very evenly wrapped with black cotton ito and is surprisingly tight for its length. Menuki and Fuchi/Kashira are the generic Cheness brass fittings, though the little bat winged Oni creature Menuki almost seems totally at home on this particular sword.

The authentic ray-skin panels, which are obviously quite long, are a little patchy here and there but overall fairly consistent and make a nice touch when you consider the costs involved (authentic ray-skin typically sells for around US$70 a sheet!).

One point of difference I should note between the current generation of this authentic Ninja sword and the earlier model I am reviewing here is the tsuba. Still made of solid brass, it has been changed to a square Kanbai version from the rounded Kochou butterfly pattern. Neither look particularly good or particularly bad  though both are weighty and a little bit clunky.

However, while they look nice enough, as with all Cheness swords the real beauty and fearsome power of this authentic Ninja sword is in the blade itself...

This blade has a very smoothly polished, reflective finish with an attractive and subtle pseudo hamon as pictured below. 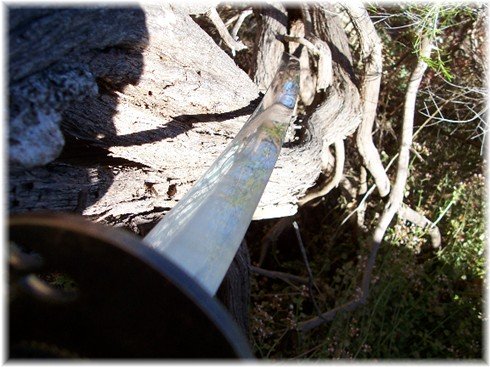 While aesthetically quite eye catching, the primary feature of this authentic Ninja sword is its extreme functionality...

Honed to a frighteningly sharp Hira-niku geometry edge, this authentic Ninja sword is made with what is easily the most durable steel available in the sub US$300 price range  Cheness Cutleries special recipe of through hardened 9260 Silicon Alloy Spring Steel.

And as you will see when it comes time to test this sword, the overall performance of this blade is breathtaking...

PUTTING THE ONIYURI TO THE TEST

When I first began to try out this authentic Ninja sword, I had no idea how far my tests would go...

At first, after having done some destructive testing of another Cheness 9260 sword  the Tenchi  against everything from saplings to a massive woodblock, I was convinced I knew just how strong the 9260 Steel is, and that any further destructive testing wasnt really necessary...

But as you will see, when confronted with a sword with as much potential as this one, I could not help myself but to push it well beyond the boundaries any other sword could withstand...

I started off on it very gently  and with a light target that tells you quite a bit about any given swords ability to accelerate to optimum cutting velocity, as well as measuring the sharpness of the edge...

And thats good old fashioned pool noodles (with the last one having a broomstick core for good measure!)

Anyway, having run out of pool noodles  I decided to soak a tatami mat overnight to continue the cutting later.

Naturally enough, this authentic Ninja sword made short work of the Tatami mat. And indeed, after a few typically overzealous cuts  a one handed effortless swing showed that no force was required  and that the excellent geometry typical of a Cheness blade could do all the work (when, oh when, will I learn!).

At first, I was happy to leave these tests at that...

But while it was one thing to say that all 9260 Spring Steel Swords were tough, the niggling feeling that there was more that needed to be done simply would not go away...

Until I found myself outside with some suitable targets that would challenge this authentic Ninja sword  if not destroy it in the process...

The first of these heavy targets was a thick 2x4 plank of solid pine wood, clamped to my trusty sword stand. Not only would this test the blades edge against rolling or chipping, but it would also determine how scratch resistant the surface of the steel was as well as its overall biting power.

The first cut went in clean and deep to about 2. And as I pryed the blade loose, I was pleased to see that the blade was completely unmarred! Encouraged, I attacked the helpless wooden plank a second time, with exactly the same result and no loss of the sharpness of the edge. 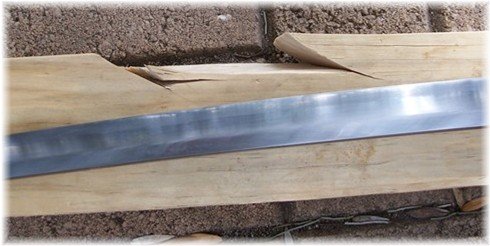 2 Deep Cuts into the wood, the blade is fine

This wasnt even close to destructive testing for this authentic Ninja sword! And the only way I would be able to determine its durability threshold was to pit it against steel...

Basic physics guaranteed that both surfaces would be damaged. But which one would take the brunt?

The first blow rang out as steel hit steel, reverberating in my hands.

And immediately I inspected the blade and pipe side by side.

The sword had taken a small, barely discernible chip. And the steel? The steel was cut open deeply enough by this authentic Ninja sword to reveal the inside of the pipe!!

Two more strikes followed suit. And even though I struck with the same area, surprisingly the sword suffered no further damage, yet the steel was cut deeper with every hit...

I was literally awestruck with the incredible cutting power inherent in this authentic Ninja sword.

It was quite capable of taking on steel and dealing out several times more damage than it sustained.

Knowing that the only way to actually destroy this sword was by taking it to an anvil with a hammer, I decided that the final durability test would involve splitting a series of large blocks of firewood - which would reveal any hairline fractures or structural weaknesses in the hilt...

After seeing its performance against steel, I had no doubt in my mind that this sword would have no trouble with such a target.

And as I proceeded to split block after block of wood with it, I was not disappointed with the outcome...

I had pushed this authentic Ninja sword further than what I would dare do with any other Ninjato.

And as I looked at it, smeared with grazed wood along the edges and with a small ding in it from the steel, it certainly looked like it had been through the wars.

But less than 2 minutes with a small piece of fine grit abrasive paper removed any trace of some minor scuffing from the woodblocks, with only the smallest  barely visible depression from where it had contacted three times against the steel.

As a final test, I stuck the blade deep into a second woodblock and bent the blade as far as I could without it ripping out where I had impaled it into the wood.

Yet it quickly sprang back to true...

Calling this sword durable is not to do it justice...

This authentic Ninja sword had handled everything I had thrown at it and was still hungry for more. From slicing pool noodles and tatami with ease, to biting into a pine woodblock, ripping open a tube of industrial strength steel and splitting woodblocks like an axe  even after all these tests it was still capable of slicing 2 saplings with a single stroke...

Sure, it wasnt quite as keen as when I first got it.

But a good sharpening session would quickly take care of this. And while I cannot recommend these tests, after all  it takes a fair amount of skill to resharpen it, and the scuffing from the woodblocks pretty much erase the pseudo hamon line, it is comforting knowing that even the worst cut under normal circumstances will not damage it. 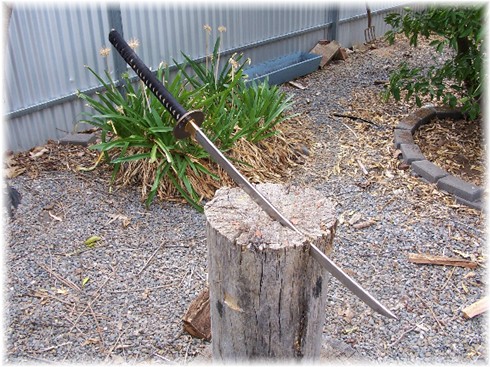 In summary, this deadly sharp and extremely tough little blade is a very enjoyable cutter.

Practically indestructible with a massive tang backing it up  it should satisfy everyone from the traditional Bujinkan practitioner looking to master their cutting form to the casual backyard cutter.

And indeed, such is its practical utilitarian design that it would also make a tremendously effective self defense blade inside the home to boot where a full length Katana is simply not practical...

We were so impressed by the Cheness Cutlery Oniyuri that we have made it available right  here SBG Sword Store for just $249.99.