I think my first battle ready medieval sword was the Black Prince by Generation 2 (now known as Legacy Arms).

Looking back at it now, especially when compared to the current version makes it look like the dreaded 'sharpened crowbar'. It was simple, it was overbuilt, and it was as tough as nails.. And while it was hardly a historical replica of the original, historical Black Prince sword, I liked it (heck, to be honest, I still do. If you can't appreciate swords like that for what they are, your missing out!).

But the Generation 2 Black Prince has come a long way since then. Indeed, pardon the pun, this Generation 2 is in it's third generation. And when you compare it to the original, and another Black Prince for a similar price range that is kind of a compromise between the two (the Darksword Armory Black Prince) it's the closet thing out there to what the historical sword actually looked like.. 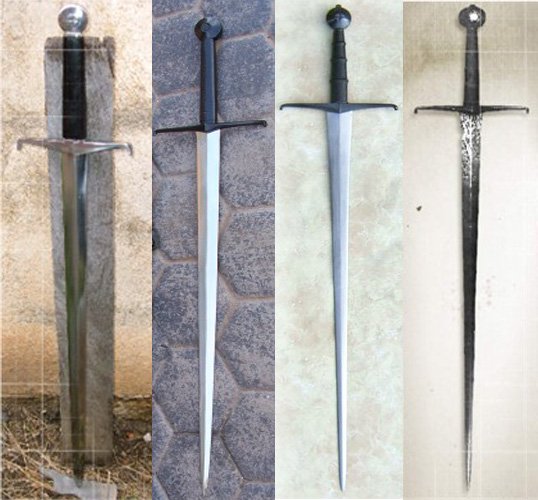 In this review we will be looking at all versions of this mean battle ready medieval sword - and you can decide for yourself which one you like..

Now as I mentioned, the original Black Prince by Generation 2 was a true battle ready medieval sword - it fit the basic criteria, with a full tang and 5160 tempered carbon steel blade and it didn't fall apart when you banged it on stuff.

Indeed, quite the contrary, it was a great cutter.

But it was also very, very sturdy - especially due to the peened pommel, which was very rare at the time and one of the reasons why it was recommended to me by my friend Jason from Arms of Valor.

The peened pommel and solid assembly (these were also glued into the hilt) plus the sheer amount of 5160 steel in the blade was enough to ensure that it could handle any abuse you wanted to throw at it. And throw abuse at it I did - quite frequently actually.. 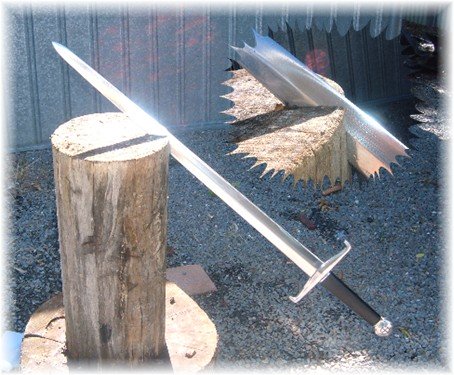 Yes, it was a beast - the total weight of 4lbs 4oz, while the historical original is supposedly closer to 3lbs 13oz. And it was also balanced quite differently, with the original balanced 2" from the guard while this one was 5".

But despite this, it wasn't badly balance and didn't feel super heavy or off balance.

In this 2 second video you get a sense of it's speed, and so did the lemons (and the woodblock for that matter).

I liked it a lot, and for a long time it was my favorite battle ready medieval sword. But due to feedback from the SBG community, Generation 2 decided to try and bring it more in line with the historical original..

Their first attempts to turn this meaty battle ready sword into something more refined were not quite on the money - though it came significantly closer. 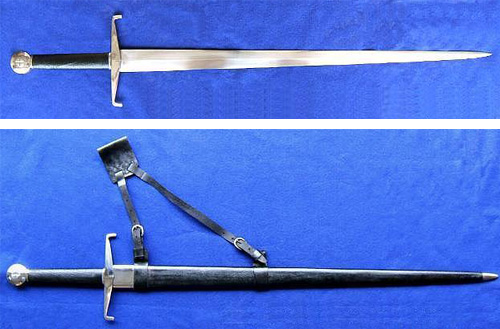 The earlier incarnations of this sword..

They reduced some of the weight in both the handle and the blade, resulting in a total weight loss of 1lb and bringing the point of balance back to almost exactly 2"..

But for whatever reason, it didn't really sell as well as the first generation. And just when everyone was thinking it was all done and dusted, this battle ready medieval sword made a comeback with it's third and final design.. 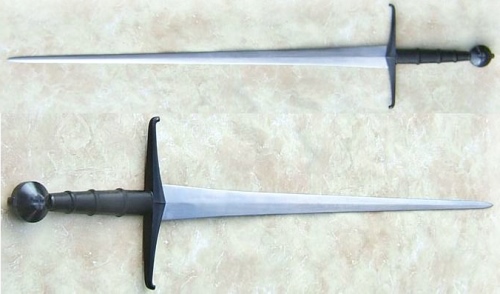 The most current version..

This is all pretty recent, and for the first batch only a few swords came out and not many people managed to get their hands on one..

Luckily, one of our members did - and here is what he had to say about it:

The blade doesn't look as thin in person as in most pictures online, though Kult of Athena's seem best representative of the actual appearance. The wheel pommel is noticeably different from the historical version, but it fills the hand very comfortably for two handed movements. The weight and balance of a blade is excellent, and even in one hand it absolutely dances. By my guesses the PoB is 1.5-2" from the guard, CoP is 13-14" from the tip, and weight is ~3lbs.

The blade is quite stiff for thrusting and parrying, and in my opinion plenty tough enough to withstand historical rigors of combat. The only disappointment was the edge. Out of the box the point would slip effortlessly through targets and water bottles even after the water had completely drained, but edge cutting would just bust bottles open rather than cut.

Partially due to my inexperience sharpening anything larger than 6 inches, let alone a double edged blade, it took considerable effort before I was satisfied, but it was worth it. I've enjoyed it so much I haven't felt the need to buy another sword since.

Rest assured that a new review will be coming soon..

But in the meantime, we will all have to wait because there is no word on when it will be restocked...

Fingers crossed on this one folks, I'll keep you updated.. In the meantime, check out my review of the other battle ready medieval sword by the same name - Darksword Armory's Black Prince here.