It is not an easy task to find battle ready swords UK that don't cost a small fortune.

The majority UK and European based sword sites sell their swords at such inflated prices that it is often cheaper to import them in from the US yourself (there are some tips on how to do this after the list)...

However, that said, there are some good vendors of battle ready swords UK. Here are some of the cream of the crop: 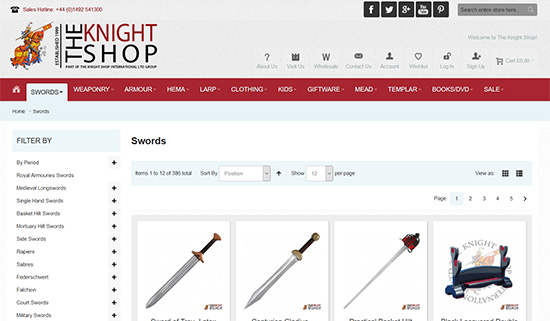 The Knight Shop International is a LOT more than just a sword store..

Founded in 1999, they have grown exponentially with three retail stores (the two smaller ones include one opposite the world famous Conwy Castle and another in the Royal Armory in Leeds) and their flagship store including a 12,000 sq ft showroom and distribution center containing a massive variety of historical weapons and products and a large sales force to turn around orders as quickly as possible (usually within 24 hours), but the most important thing is - they are very active members of the sword community and REALLY know their products.

Indeed, they heavily involved with HEMA and the main sponsors of many large HEMA competitions in Europe, actively work with Windlass Steelcrafts and Deepeeka to to develop new, historically accurate, swords for the HEMA community and are working with them to resurrect discontinued favourites - have developed their own line of realistic synthetic sparring swords and even a full time FIGHT SCHOOL on site!

So not only do they offer great prices, customer service and true product knowledge - by supporting them you are actively enriching the sword community! HIGHLY recommended.

On the 6th of April 2008 collectors of Japanese swords in particular received a rather nasty surprise - the UK slapped a heavy handed ban on all curved bladed swords to combat a perceived growing trend of using cheap wallhanger 'Samurai swords' to commit violent offenses.

While these laws have been amended so as to minimize impact on legitimate collectors like yourself, and now include any sword made using traditional hand made techniques (before it was only swords made in Japan, before they realized the devastating impact this would have on many traditional sword schools who could not afford a real Nihonto). Ebay has a decent guide explaining the legislation here - so be sure to check it out.

Blades-UK
Comments: While their product line up features mostly wall-hangers and ornamental swords, Blades UK have a massive variety of swords available, including many by Hanwei and Cold Steel and several other lesser known and generic brands. Well worth a look  and the BIG BOYS of the UK Sword scene.

Oriental Weaponry
Comments: Primarily selling Hanwei swords (but also many others, including Cold Steel and even Ronin Katana!) this UK merchants prices are actually pretty good when compared to most other sword sellers in Europe. A decent range of Japanese swords at good prices, well worth a look if you are in the market for a Chen Katana or Chinese gongfu sword.

Barrington's Swords
Comments: A large UK based re-seller, not all their swords are functional or battle ready, and the prices are a little high by international standards. But they do have a solid selection from all the major sword brands (Hanwei, Cold Steel, Honshu, etc). Well respected, they have in the past been a major supplier for the UK film industry, involved with sourcing swords for blockbusters such as Tomb Raider, James Bond and many other movies.

Armour Class
Comments: Not a reseller, but a manufacturer of high quality battle ready swords in the UK based in Scotland, Armour Class has been around for as long as anyone can remember and are a pillar of the sword industry. All their swords are 100% hand made from EN45 steel in Scotland and have a solid reputation for quality and customer service that they have many customers in North America and all over the world.

Raven Armoury
Comments: Established in 1987 and based in Essex, Raven Armory are another maker of original swords and have a sterling reputation for quality. With a wide range of swords covering every period in European history (though not so much from the 18th to the 20th century as there are still many reaosnably priced antiques out there from that period) they also have very authentic looking 'aged' swords and specialize in one off, custom bespoke designs for the discerning collector of battle ready swords UK.

Southern Swords
Comments: From Windlass Steelcrafts to Hanwei and everything in between, Southern Swords has you covered for all your sword needs from every time period and culture. Established in the late 1990s, they also stock a wide range of accessories and associated bits and pieces, including costumes, L.A.R.P. gear and pretty much everything else a sword collector would be interested in. Well worth a look.

If none of the above sellers has anything that grabs your fancy, or you wish to take advantage of the massive US market - you may wish to consider using the services of a mail forwarding company as explained on our site here.