The Blutsauger sword from the Anime, Shakugan no Shana (Burning eyed Shana) is an inexpensive and fairly faithful replica of the original suitable for display or cosplay.

But how does it stack up from the perspective of an experienced functional sword collector? Read on and find out! 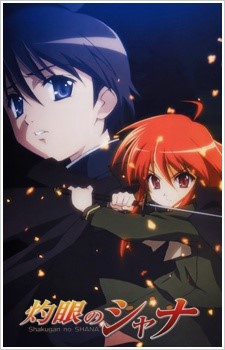 Shakugan no Shana (“Burning-Eyed Shana”) was a Japanese anime that ran for three seasons between 2005 and 2012. The anime was based on a popular light novel series by Japanese author Takahashi Yashichiro, and is known among anime fans for its excellent execution of common anime themes and tropes. In the world of Shakugan no Shana, human beings unknowingly live under the threat of beings from a parallel universe known as the Crimson Realm. These creatures are known as the Crimson Denizens, and some among them seek to drain humankind of The Power of Existence, a special energy that all living beings possess but only Crimson Denizens can manipulate. By stealing a human being’s Power of Existence a Crimson Denizen becomes more powerful and threatens the balance of both worlds. Other Crimson Denizens want to preserve the balance between the worlds, and so form a special contract with human beings to grant them the power to fight back. These beings are known as “Flame Haze,” and grant their human partners great abilities.

Enter Sakai Yuji, average Japanese High School student (because of course). Yuji has a problem – he’s just discovered that he happens to be dead, and his Power of Existence was almost completely drained by an evil Crimson Denizen. He’s rather callously informed of this fact by a girl with flaming red eyes and a katana – the “Shana” from the series title. Yuji is expected to vanish as the last of his Power of Existence is used up but somehow he continues to remain in our world, and life – or afterlife – only gets more strange and dangerous from there. Yuji and Shana become caught in the middle of the epic battle between two worlds, and neither of them will emerge unchanged from the conflict. 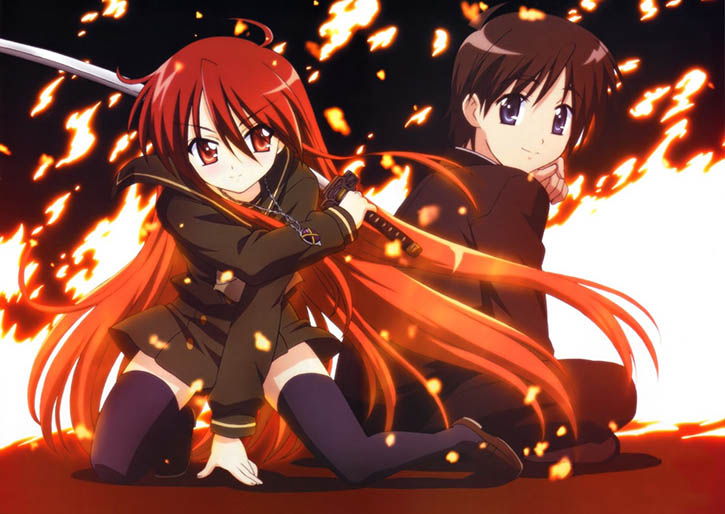 Action, adventure, romance – Shakugan no Shana has a little bit of everything that makes anime great.

One of the features of Shakugan no Shana is the existence of magical artifacts called Treasure Tools. There are countless numbers of these artifacts, but one of the more important ones in the series is the greatsword Blutsauger. 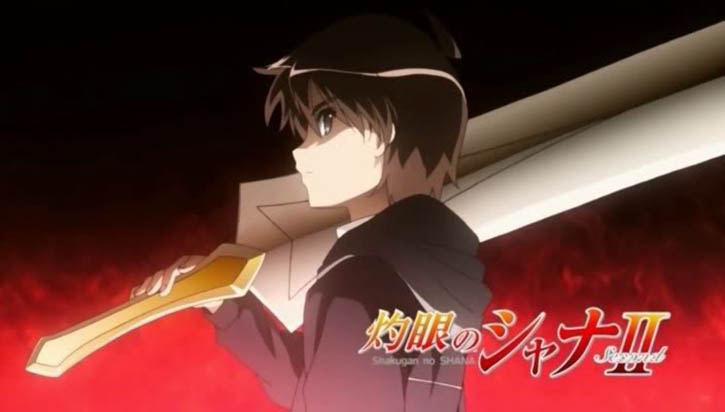 Blutsauger (German for “Bloodsucker,” such a cuddly language, that) is a massive two handed sword that is so heavy no one can lift it – unless they have the ability to manipulate The Power of Existence. Sakai Yuji comes across the sword partway through the series, and due to his special, uh, “condition,” he is able to use his Power of Existence to wield the sword. In addition to being a huge and powerful sword the Blutsauger has two special abilities – one is to shrink and be hidden in the form of a bookmark that Yuji carries with him, the other is to cause multiple wounds to people even if its blows are blocked. It is a dangerous Treasure Tool, and only Yuji’s strong morality prevents it from becoming a danger to our world as well as to the Crimson Denizens he fights.

The sword we received from Trueswords.com is sold as the Sakai Gaming Sword, and it is a replica of the Blutsauger. In this review we’ll take a look at the sword, how it resembles the one from the series, and if the word “sword” actually applies to it…

The Sakai Gaming Sword arrived like most parcels from Trueswords.com – by courier, and double boxed in thick cardboard. Thankfully FedEx did not have a difficult time finding my location; in the past, I’ve had an extra week tacked on to my deliveries as drivers circled the prairies in a vain attempt to follow relatively straightforward directions. Full marks for Trueswords and FedEx, getting it here on the first attempt! 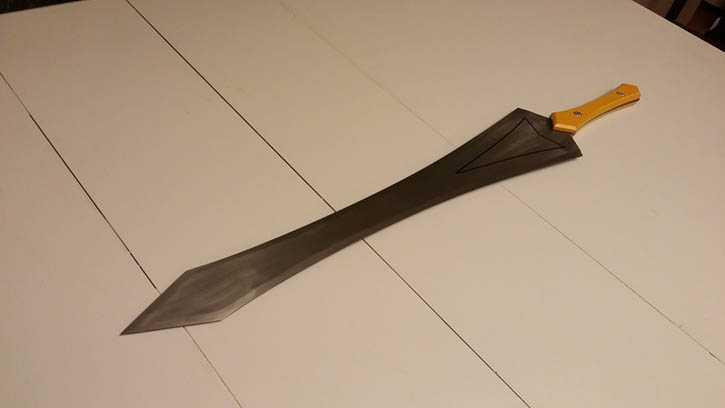 On pulling the sword out I was immediately struck by the size – roughly half the length of the sword from the anime. This was not to be a disappointment, though, as I was soon to discover… 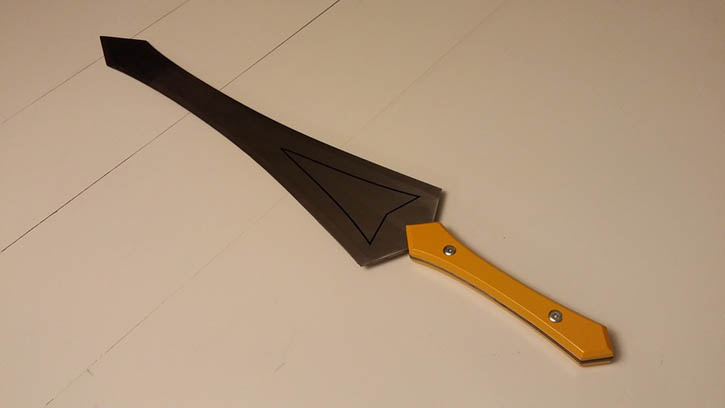 Unlike many “anime replica” swords, the Sakai Gaming Sword is not made of stainless steel. Constructed of 1045 carbon steel, it is not immediately certain if the sword has been tempered. However – it is thick, solid, and seems pretty sturdy. 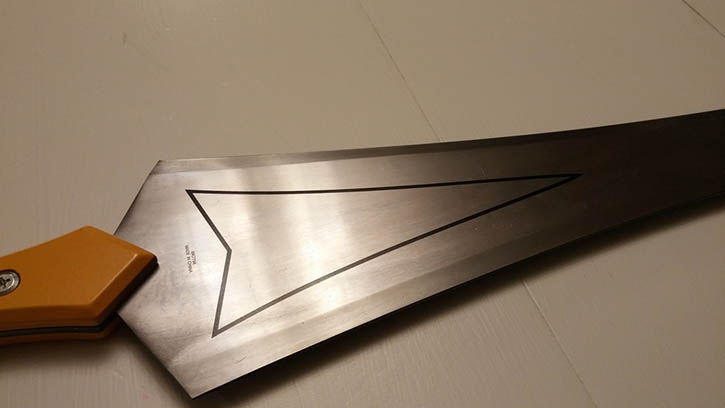 I did not have time to sharpen the blade, but if it is 1045 steel as advertised then I expect it would be able to be sharpened and hold a reasonable edge. Many battle ready swords sold on the modern production market are made of 1045 steel – the biggest difference between this sword and one of those is the amount of steel used (probably 2-3x more steel in this sword just by the feel of it). 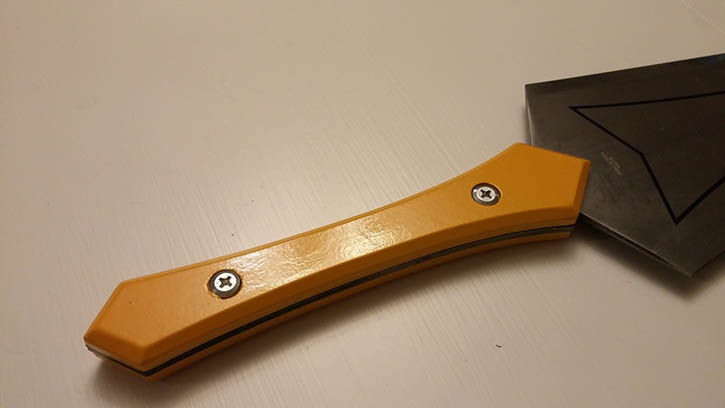 That’s right – this sword is full tang. And not the “full tang” you sometimes see even on battle ready swords, but a thick, robust, heavy tang that runs the full length of the handle and is attached by screws. 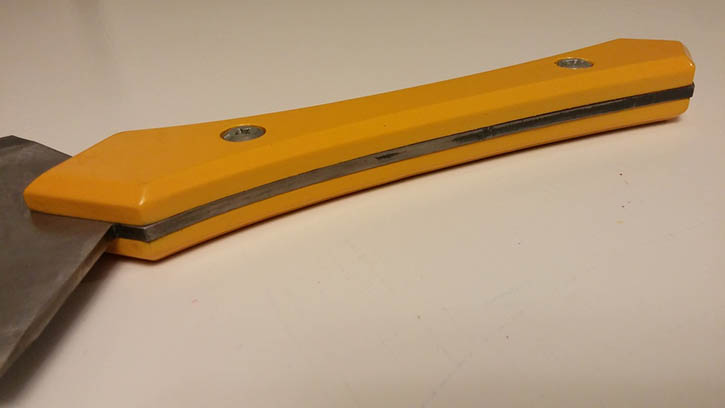 One of the screws was a touch loose on arrival, but a quick bit of TLC with a screwdriver solved that minor issue. 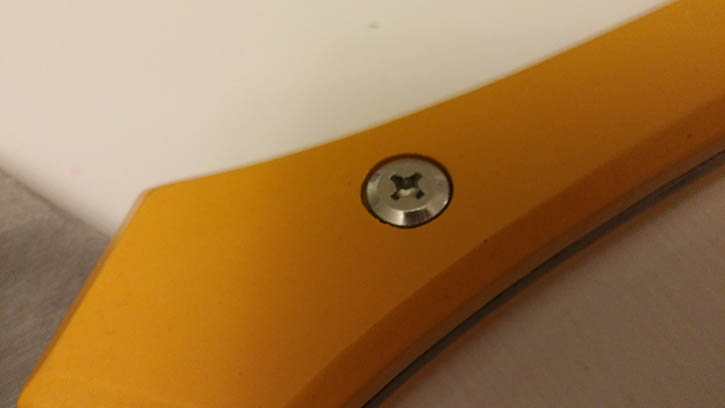 The handle is long enough (barely) for a two handed grip, at least for me – it might not be long enough for larger folks. Then again if you are bigger than me you probably don’t need to use two hands on a relatively short sword like this.

The paint was bright and not chipped anywhere, and definitely caught the eye.

It’s a darn good thing this sword isn’t the size of the Blutsauger, because it would be impossible to wield. Even the size that it is you can feel it – it taxes the muscles to hold and swing, at least for any length of time. With two hands it is significantly more comfortable, though still heavier than you might expect for its length. This is probably due to the blade shape, which places more metal farther out from the handle and leads to that high POB.

Still, once you get it moving you can definitely get the feeling that it would be a beastly cutter. Unsharpened though it is I still wouldn’t want to take a hit from this – it would break bones at the very least. If it was sharpened I could see this taking off branches, limbs, anything you cared to swing it at. AT least until you get tired!

The Sakai Gaming Sword comes with a sheath from Trueswords, and as far as sheaths go it’s not bad. 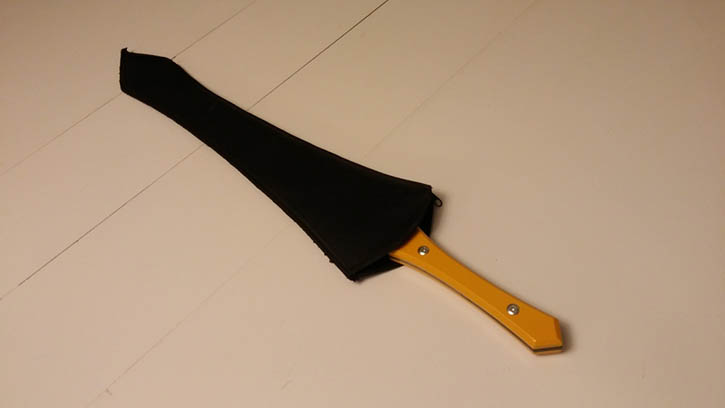 It’s nylon, has a back strap for carrying, and uses a zippered side to keep the blade snugly inside for carrying.

I have to be honest, I did not expect this sword to be as good as it was. For under $50 it’s a steal. The design of the handle is very similar to the tactical longswords of modern swordmakers, and even if the blade is a funky shape it is very unique. Let’s be real - this is an oversized sword, much thicker and heavier than a historical model of comparative size would be. But that’s hardly the point, is it? If you wanted a historical sword you wouldn’t be cruising the anime swords section…

If you were a big fan of the Shakugan no Shana anime, you’ll be pretty happy with this sword. If you want a heavy, “tactical” shortsword that won’t break the bank, you might want to check this out too. For the price it is surprisingly durable and well made.

I did my best, but was unable to channel any Power of Existence through it. Sorry, folks. Looks like if you run into any trouble with Crimson Denizens, you’re on your own…

While this sword is no longer available at Trueswords.com you can still find it for sale for a mere $39.99 here at Amazon