I have to admit that Cold Steels advertising for their British Military swords like the 1796 Light Cavalry Saber is quite persuasive.

The official Cold Steel Promotional vid demonstrating thrusts, cuts and backhanded swipes against a variety of targets - with impressive results

However in this review, esteemed SBG Sword Reviewer Mike Harris strips away the hype and takes a realistic look at how their 1796 Saber looks, handles and performs - and as you will see - despite a few minor points, this sword holds it own remarkably well...

Cold Steel is known for producing very sharp swords. Through videos and on-line advertising, they promise very durable swords that are known for their cutting ability.

However, my experience with their product line has been "hit-or-miss" with regards to performance. I was very interested in how this cavalry saber would handle, how it would look compared to a historic example of some antique British military swords, and most of all how it would cut.

I have a weakness for British Military swords and this type of sword in general. Two of my first major sword purchases were antique early 1800s German and Austrian sabers with the same stirrup guard. I determined to do a loose comparison with my Austrian artillery saber. This sword was purchased on eBay for well under $200 and came with a healthy layer of patina, but unsharpened and in unissued condition. Therefore, I determined this would be a reasonable comparison of hilt fitting and execution, along with fit/finish and feel.

The blades are dissimilar in length and configuration so any handling comparisons (other than comfort of the hilt) would not be appropriate.

Take a look at the pictures of the antique and the new Cold Steel reproduction. The first thing that is extremely noticeable is the Pommel nut at the rear of the Cold Steel saber. It is the single most annoying thing about this sword. Historic military sabers and British Military swords had peened hilts, as noted on the Austrian antique. I have three antique military sabers from different countries, all made between 1800 and 1900. The only characteristic they all share is this peened hilt construction. And of course, real German and British military swords had peened hilts. 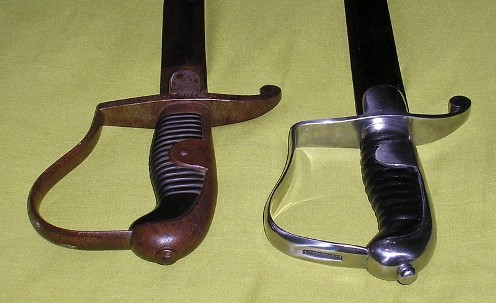 The grip seemed a little off at first glance. So some careful study of photos of original British Military Swords was called for. After a significant time was spent comparing them to the Cold Steel offering, I determined that the only thing that's noticeably different is that Cold Steel has polished the tang pin smooth with the grip flaps on each side of the hilt.

Notice the pins on the Austrian saber. They protrude noticeably from the sides of the grip, and they are uncomfortable. Were this a "using sword" I would polish them off like the Cold Steel sword.

The stirrup guard seems to be a pretty close match for historical British military swords as far as I can tell. The first thing you notice when you see it up close is the mass of the guard. All three swords have the same thick bow meant for catching heavy blows and smashing opponent's faces. These are probably the most effective "brass knuckles" I've ever seen, and would doubtless be effective at close quarters.

In comparing the leather grip of the Cold Steel saber with the antique, I have to give the nod to the Cold Steel sword as far as comfort goes. The leather is moderately good quality and shape fits the hand well. During subsequent cutting exercises I came to appreciate this grip even more as it let the sword move very well during powerful strokes. It seems to "snap in the hand" and deliver good cuts without a lot of wrist or arm motion. It's one of the things I like most about this little beast.

Being based on the Tulwar also means the blade has a configuration known as a "hatchet point" where the tip of the blade becomes wider for the last 10 inches or so. This shifts the point of balance well down the blade. The result is a sword that cuts very powerfully, but is sometimes hard to control for precise or delicate maneuvers. That is certainly the case with this sword (and the original British military swords).

If you are looking for a light fencing sword, look elsewhere. But if you're looking for a powerful cutter and a sword capable of blocking hard cuts by heavy swords, this may be just your cup o' tea.

The blade was very sharp as it came. It would slice paper with ease and would almost lift hair. At least the forward half of the blade (the foible) was this sharp. Like most military sabers, the rear half of the blade (the ricasso) was unsharpened and is designed for blocking or catching an opponent's blade, not cutting. Also, the first 8 inches of the false edge (back of the blade) was sharpened. This is used for backhand cuts and makes a very effective "hooking motion" cut.

As mentioned, I chose the all steel scabbard because this one was less expensive. This is an extremely heavy-duty scabbard. The one-piece steel shell is lined with wood. The sword fits snugly and does not rattle. It fits the scabbard securely, yet after about one inch of draw the sword is completely loose in the scabbard and is very easy to draw. The mounting rings are also very heavy-duty and seem to be strong enough to suspend my body weight if I wedged the scabbard in a tree limb! This scabbard is built like a tank and is one of the good things about this piece of weaponry. 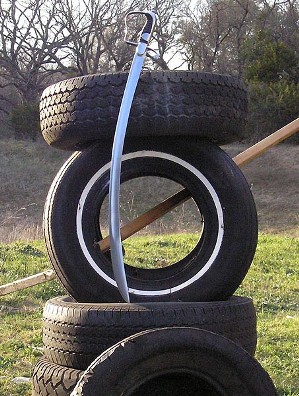 I started testing the Cold Steel saber with the tire pell.

I had been asked by a forum member whether or not this saber was a durable beater and would stand up to a significant amount of simulated combat abuse.

The pell testing was particularly aggressive with this sword, as I wanted to provide some valuable feedback quickly.

It included landing about 250 full-power blows on the pell. These were strikes with the cutting edge and backhand strikes with the sharpened false edge. I also did a little bit of thrusting to test this British Military swords rigidity and penetration characteristics.

A goodly number of blows were landed at extreme oblique angles. This is designed to impart maximum opportunity for vibration, thus quickly finding fittings that will loosen over time. This saber exhibits about the same degree of vibration as the historic early 1800s issue British Military swords in like-new condition. Also, the extremely sharp blade bit into the tires well, exhibiting what promised to be good performance in the cutting tests to follow.

The first bottle cutting with this saber was a bit awkward. I am used to straight or slightly curved swords. The way a curved blade like this cuts is quite different and was a bit of a challenge for me at first. The edge is behind where a straight sword would have made contact, so it feels like you've missed the target for a split second in the cut. This becomes more pronounced as you shift the point of contact with the target closer to the tip. In cutting with the last couple of inches of the blade, the sword hilt is actually pointing four or five inches past the target.

However, it only takes half a dozen cuts to adjust to the new feeling. And once you've become accustomed to the different feel it actually makes good cutting easier. Since there is some of the sword blade that's already passed the target before contact is made, that part of the sword helps keep the edge true during the cut. This makes clean cuts with good edge alignment almost a sure thing.

I usually have at least a couple of cuts where the sword hilt shifts in my hand, resulting is a curved cut through the target. It usually curves downward toward the cutting stand. this was totally absent during my use of this saber.

Here is a picture of my first attempt at cutting a six-pack or water filled bottles. Perfect performance! (the sword, not me) 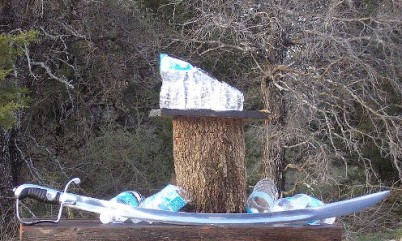 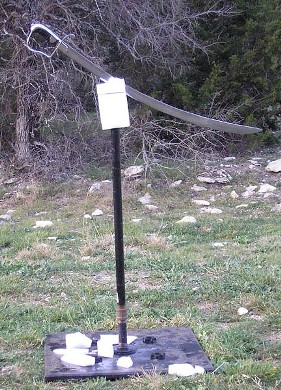 Swordfodder was an innovative but short lived company that attempted to produce consistent targets for backyard cutters. Their problem, however, was that most collectors considered them to be overpriced, and unfortunately the company went out of business within a year of starting up.

A Swordfodder Master Target was selected for testing this Cold Steel Saber. This target is very resilient and requires disciplined use of the edge to cut.

Anything less, and the blade either causes the target to bounce out of the way, or the cut is stopped in the middle of the target.

In the following really terrible video you can see that behavior.

Some cuts are pretty good and some strike without the accompanying draw for a slicing cut. And due to my really obvious lack of skill and training, some strikes would better be described as "monkey at the zoo found a sword" (no offense to any monkeys out there).

The Sword Fodder Master Target is designed to be an difficult challenge for Japanese Sword Arts Practitioners. But here, Mike makes short work of it with the 1796.

Following the example in the segment on these British Military swords from the Cold Steel product video Sword Proof, I performed a similar flex and shock test. I did this by placing a board on the floor against a door jam. I measured 6 inches from the door jam and placed the tip at that mark. Holding the sword vertically, I applied pressure down onto the hilt until the blade flexed to the point where the middle of the blade touched the door jam. I then turned the sword 180 degrees and repeated the flex. This was done twice to each side. The blade returned to true each time without any indication of taking a set.

During the cutting and pell testing I also performed the shock test by slamming the flat edge forcefully against my cutting stand three times on each side. This test is designed to cause the fittings of the hilt to loosen. There was and still is no sign whatsoever of looseness or rattles.

Preferences: I really wish this saber had a historically peened hilt assembly. Cold Steel has created an extremely durable and historically accurate military saber and scabbard, then trashed it by using a pommel nut to hold it together.

On the other hand, I have seen several DIY guys who love this as it makes it very easy to disassemble the saber and use the blade as the basis for a custom sword.

Likes: Just about everything else. The grip is comfortable and helps controllability. The edge is very sharp and holds its edge well. This is not a fencing saber by any means. Nor is it suitable for any kind of subtle work. But as a powerful cutter and a downright wicked chopper against heavy targets, it's pretty hard to beat. Now I know why the British and German military establishments adopted this beast and used it almost up to the advent of armor and airplanes.

Like all Cold Steel swords, the best deal for these British Military swords is to be found here at Kult of Athena - where the usual somewhat hefty price tag of $379 drops down to a MUCH more reasonable $239.95, which is the very best deal by a reliable seller for these British Military swords ANYWHERE on the internet (and with fast and very low priced shipping options too I might add)...