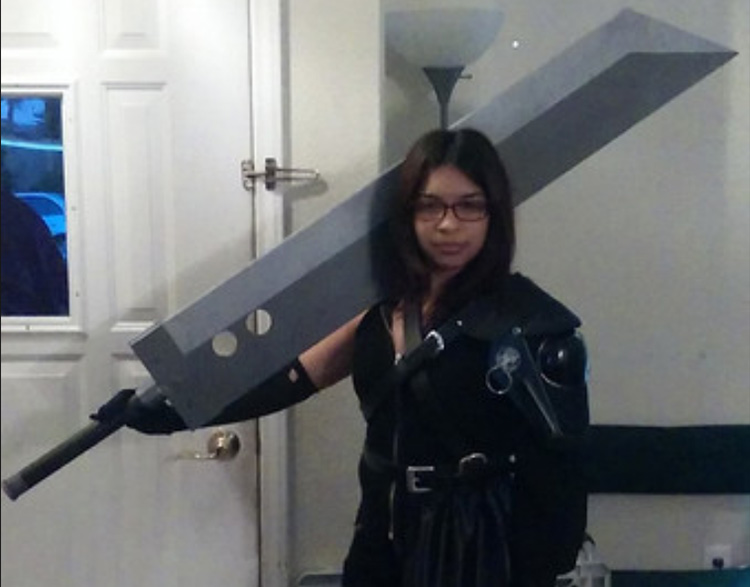 The Buster Sword is both iconic and instantly recognizable - for it is one of the largest, heaviest swords ever imagined, and replicas of it are a popular choice for cosplay and collectors of anime swords in general. Yet a preliminary search of the internet to find Buster Swords for sale delivers disappointing results..

In this article, we will be looking at the various replicas of this sword that have been made and are available, if it was based on a historical weapon and could it actually be used in combat, and some options for cosplayers looking for a buster sword of their own..

Was the Buster Sword Based on a Historical Type of Sword?

The short answer is, no.

The long answer - kind of. If you look at the basic shape of the blade, it is essentially based on the tip and the first 2 inches of a Japnese chokuto sword, commonly popularized as a 'Ninja' sword, just scaled up to gigantic size.

Historically, there were quite a few massively oversized swords - though the majority of them were not actually functional and were called 'bearing swords' and were used for ceremonial purposes only. Why?

Well, the simple reason is that historically few swords were over 3lbs in weight, and the largest, heaviest swords no more than double that.

In real life the buster sword would weigh at least 80 pounds - quite possibly over 100lbs, and anyone who attempted to use one in battle would not be able to generate enough power with it to do any significant damage, and would be dismembered limb from limb by a more nimble fighter, thus such a blade never appeared historically.

That said, there were some massive swords used historically all over the world as 'horse killers' and were designed to cut the legs off a horse on the battlefield (not very chivalrous I know, but all is fair in love and war). 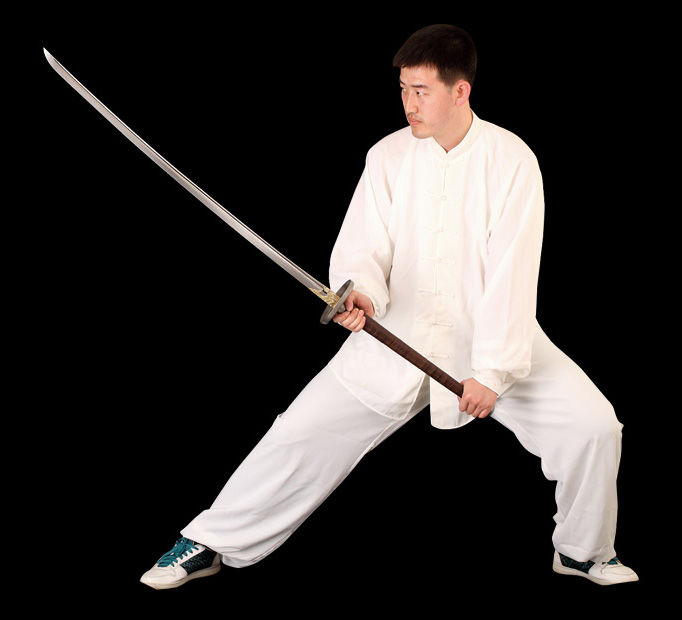 However despite having a similar length, swords like the Miao Dao weighed less than 4lbs, and I know that in a sword fight if I was given the choice of the Miao Dao and a Buster Sword which one I would pick..

Of course, as Final Fantasy is just that, fantasy, at first it is quite reasonable to assume that if Cloud was 12-14 times stronger than the strongest human, he could use it effectively, right?

Well, apparently - no. Popular YouTuber Skallagrim in his 'Fantasy Weapons Scrutinized' series suggests that if the Final Fantasy universe follows the basic laws of physics the same way as they do in the real world, it will be unusable due to 'linear momentum'.

So the long answer is, no - it was not a historical sword and is not realistic by any stretch of the imagination..

Why are there no buster swords for sale? 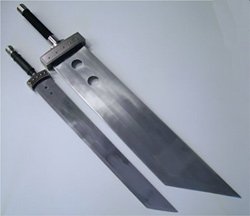 Two of the unauthorized replicas

You may have noticed that almost no matter where you go online, there are no replicas of this sword available in the anime sections of various sword stores. But it wasn't always this way..

Until around 2008, there were a lot of replicas that cost around $80 or so and were made from a fairly thin sheet of stainless steel being made in China and flooding the sword market.

What these sellers did not know was that the parent company behind Final Fantasy, Square Enix, who hold the copyright to Clouds sword and all the other Final Fantasy swords, had hired a team of lawyers and began to systematically sue the sword sellers who were making unauthorized replicas (click here for an article about this action at wired.com)..

Within a few short months, these unofficial replicas were completely withdrawn from the market, and with no interest in replacing it with an authorized replica, fans of the series had to resort to making their own or hiring a custom sword maker to make one for them..

A situation that remains to this day.

One off Custom Builds

Generally speaking, custom sword makers who make one off swords by fans of a particular copyright protected sword rather than a production run are not targets of legal action. Two of the most famous custom builds have been documented on YouTube - the first, made by eccentric Irish custom sword maker Michael Cthulu who specializes in massive, oversized fantasy blades.

The most recent build by Michael was auctioned off for charity and cost around $6,000  - whether or not this is the going rate I am not entirely sure, but Michael can be contacted via his Facebook page and does accept commissions, though how long they will take to build is not known (generally speaking, for custom builds like this, they cost a lot of money and take a lot of time)..

Another custom build was done by Man at Arms Re-forged.

Most people who want to buy a buster sword either make their own out of wood or buy them from small scale sellers on sites like Etsy who make a few every year from wood for people who either cannot be bothered to make them themselves or who do not have the basic DIY skillset required to do so.

DIY - Make YouR Own

To do this build you will need:

You then simply cut it to shape using a table saw and start painting the edges in a well ventilated place, first coat in white and followed by a metallic spray on the blade.

To get that realistic 'wear and tear' look, the edges should be covered with painters tape.

Then the body of the blade is sprayed with a coat of black lacquer and given a light spray coating of metallic paint - then do the same thing to isolate the handle and paint it yellow. 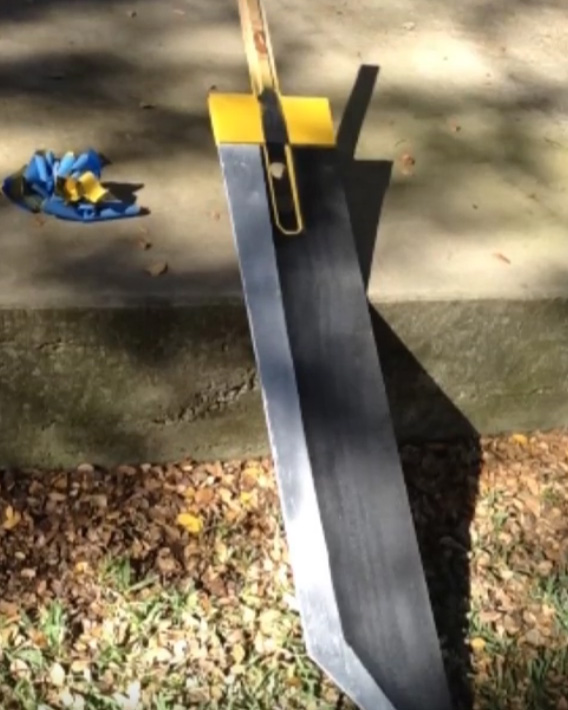 The handle is then wrapped with a roll of sticky gauze tape.

Then use the electrical tape to wrap the pommel and other

Using a black paint pen to paint the blade and a gold one to paint the guard area, details of the sword are drawn on and will stay there permanently. 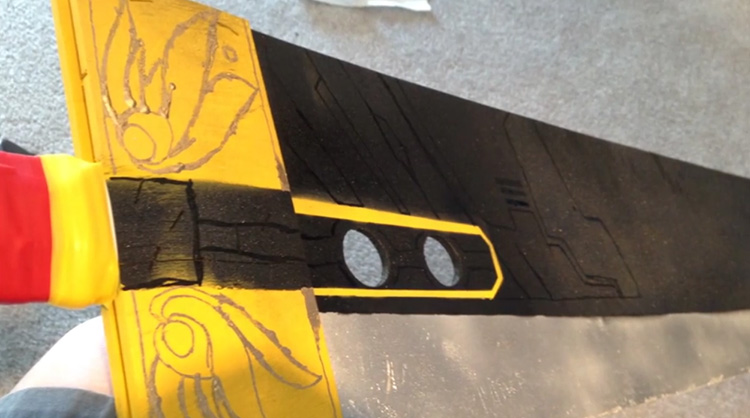 And viola, there you have it - your own replica suitable for cosplay that takes a few hours to build and costs less than $20. Below is the video which details the steps taken to make this build.

So there you have it - the complete picture - what this sword design was based on historically, why it is not really a plausible sword for the real world, why there are no readily available replicas, who DOES make a handful of replicas, and options for cosplayers looking to buy or make their own..!

It is a shame that the parent company is seemingly uninterested in having an official replica made, and I am sure if they ever did it would be incredibly popular. If the situation changes, we will let you know!