I must admit, when I first learned that Cold Steel were making a Katana Machete I was personally quite excited..

It was not just the super low price tag that got me excited - it was also the fact that this is exactly 'what the doctor ordered' for the sword market - a tactical style blade with solid fittings that could be used to fearlessly hack up a multitude of targets - in other words, a backyard cutters dream..!

But does it live up to the hype? True enough, at the price point it is available for - even if it did only half of what you see in the Cold Steel promotional video it would still be a bargain. So what CAN it do?

Let's take a look at it and find out! 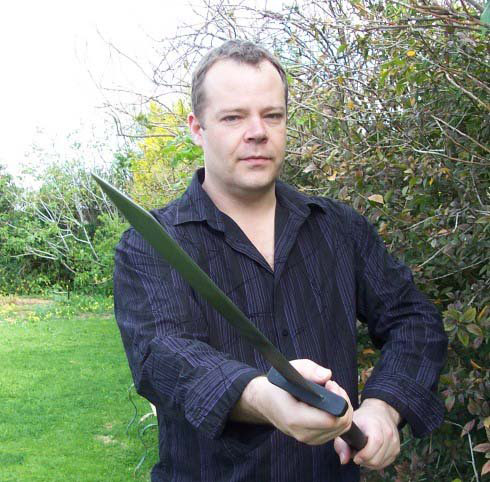 The cold steel promotional video for this piece really does whet the old appetite for destruction (though the scenes of chopping up a hanging pig are not really for the squeamish - click here to see the video on YouTube)..

Lynn Thompson (the president of Cold Steel) does suggest that the blade is relatively thin and needs some power to reach its full cutting potential. And looking at the video, it does seem that the blade has been sharpened a little more than the factory edge (we will come back to this point in due course) but for now let's take a quick look at this Katana Machete from tip to toe to see what it is all about.

The cold steel Katana Machete comes with a simple cardboard sheathe to protect the blade in transit, but there is also an optional tactical style sheathe with backstrap available for another eight bucks or so (I actually bought this sword pretty soon after its release and the sheathe was not available at the time, so just got the sword).

Underneath the sheathe there is of course the matt black blade, made from 1055 carbon steel in South Africa with a black baked on anti-rust finish.

The blade itself is seamlessly attached to the black, injection molded polypropylene handle - so of course there are no gaps, wiggles or other issues that plague real Katana.. 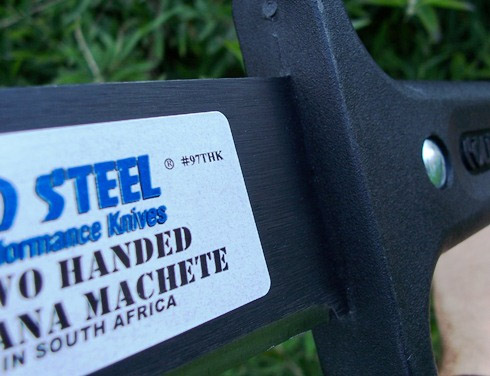 The sticker on there is a little annoying as it needs to be peeled off and then the residue cleaned away, and I could have done without that as it already has a cold steel brand mark stenciled on the handle, but no big deal of course.

The tang of the sword is firmly affixed to the handle by two heavy duty bolts - and there is no doubt that it is about as solid a construction as a sword or machete could be. 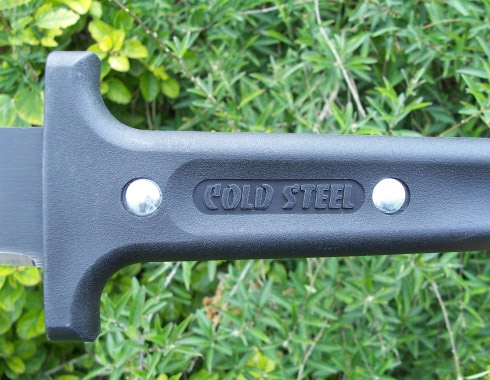 The end of the handle also comes with a small hole, to which you could potentially attach a lanyard to stop it jarring out of your hands and flying away or a paracord wrap to give it some extra grip - which is a nice utilitarian touch. 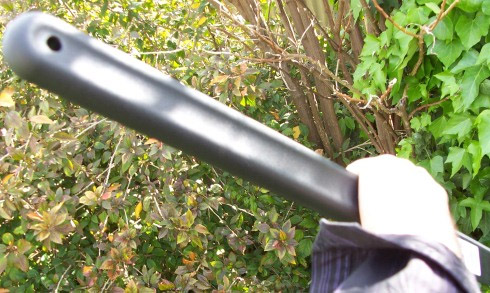 Pretty solid construction, so let’s take a look at the blade.

It's a very simple design really - around 2" wide by 19" long, the blade is quite short really compared to a normal 28" Katana, but the long handle means that it can be wielded in a variety of ways giving it ultimately the same reach if gripped lower down the handle, or shortened in an instant for close quarter work if gripped closer to the handle, making it quite interesting and versatile (and quite fast too, the point of balance is 1.5" from the guard and it weighs just an ounce less than 2lbs).

Its shorter length and wide profile also makes it STRONG despite being thinner than a regular machete, as does the fact that it is made from nicely tempered 1055 carbon steel.

Now as mentioned, the blade is coated in black baked on anti-rust finish which actually seems to work pretty well - but the edge is a typical v shaped secondary bevel and is not similarly coated.. 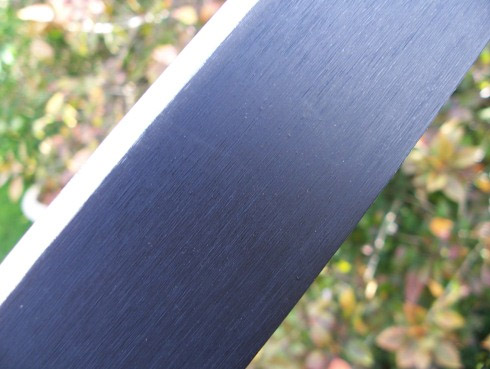 The "kissaski" (tip) of the Cold Steel Katana Machete has what is often called in knife collector circles a rough 'tanto' style triangular point and is wickedly functional. 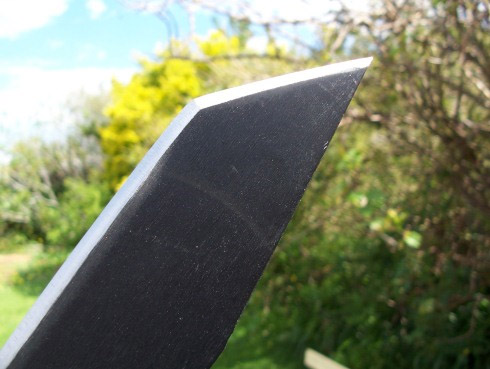 However the blades edge as a whole leaves a fair bit to be desired as we will see in a moment..

Now at the start of this Cold Steel Katana Machete review I mentioned that there are a few shots of this blade that show that the edge looks quite different than the out of the box factory sharpening..

And indeed, I found that cutting straight out of the box, while the edge was almost paper cutting sharp, it was a bit hit or miss with its cutting ability. Sometimes it would cut ok, and other times not so good..

Echoing this same sentiment are some videos by a German gentleman on youtube, BlackForestGhost1, who presents a three part Cold Steel Katana Machete Review that has parts 1 and part 2 showing that the factory edge is really something of a disappointment. But in part three, which you can see below, he shows that with a little sharpening it can perform rather well..

Anyway, for general gardening fun, I found the Katana Machete to be quite adequate - and indeed, if there was ever to be a 'Samurai Gardening Service' - an in joke I have had for several years which involves an overgrown backyard, a telephone call, and three guys pouring out of a van and hacking up everything in the garden - well, this would have to be the tool for the job! It certainly makes yard maintenance a whole lot more interesting that is for sure!

But all kidding aside, the factory edge really could have been done a whole lot better - and to really get the most out of this sword, giving it a proper edge is a must and transforms it from a brutal hacker to a real heavy duty cutter.

For its faults though, I did find that the edge was EXTREMELY durable - the steel itself is really nicely tempered, and I found this out directly with several forceful strikes directly into a steel pole. 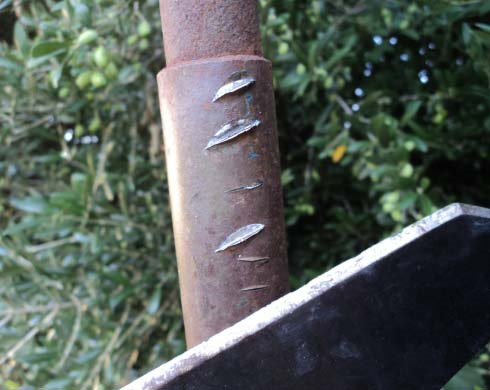 You can see this, plus the mixed test results on tatami, in my video below:

While it did not cut through the triple rolled tatami mat, it actually did a reasonably good job considering the edge does struggle at times - but with a proper sharpening job, its versatile nature combined with extremely strong steel, rock solid handle construction and dirt cheap price tag make it a must have beater..

So there you have it - the blade itself is very strong. The construction, tough as nails, and overall - despite a few minor shortcomings - it really is a backyard cutters dream. The kind of sword you can use for years on end without worrying about the tsuka cracking, the blade breaking or something you can use on targets that would normally be considered to be extremely abusive.

Yes, the edge could be better - but even something as simple as an accusharp can make it keener, though to get the absolute most of it you'd need to sharpen it professionally to do away with the acute angle and you then have in your hands a truly devastatingly effective weapon that would be a must have tool when the inevitable zombie apocalypse comes..

The Katana Machete sells at the Cold Steel website for $69.99, however you can pick it up at the best price online for $20 less at just $49.95 HERE at Kult of Athena