Created for martial artists by a martial artist for test cutting practice - it is promoted by a short video called 'One Perfect Jian Cut' featuring Sifu Rodell cutting an unsupported stem of bamboo shown below:

From the video, and from the Sifu endorsing the finished product he designed- it certainly does seem to be a good sword and quite possibly what many practitioners of Chinese Martial Arts have been wanting for many years now.

But does it really live up to the hype - and if you buy one, will you receive a cutting jian as good or as sharp as the one in the video?

Find out with this impartial third party review. 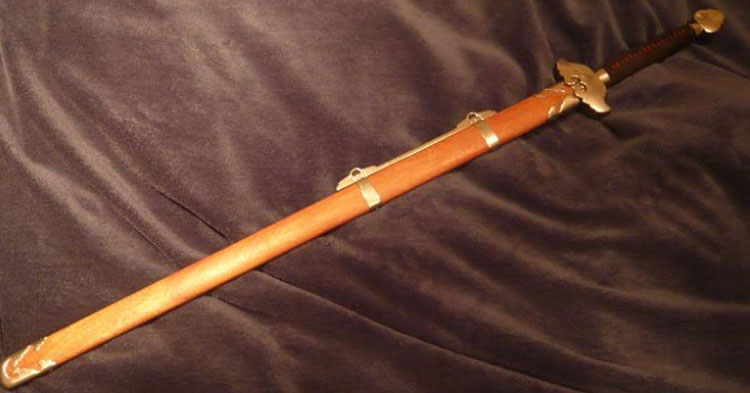 While I’m primarily an empty-hands practitioner, taijiquan’s jian form has always been an interest. Also, being Chinese, I figured that I might as well own a representation of my martial culture. However, when I first got into sword collecting, there were few examples of well-made jian within my price range. When I heard that Scot Rodell of GRTC was working with Hanwei to make such a jian, I knew that I’d have to own one. As soon as I heard that it was on the market, I snapped one up. 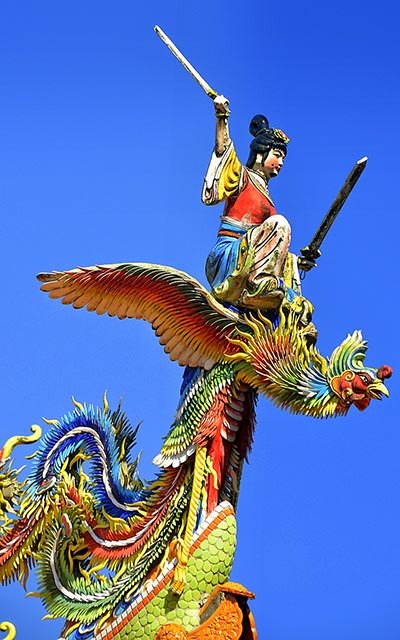 The jian is a Chinese double-edged blade. Unfortunately, much of its history has become confused by the myths spread by the proliferation of wushu. The jian evolved through countless decades of use from dynasty to dynasty.

Rather than conforming to a single typology throughout its history, many variations existed, mainly based on different fittings, with different shaped guards, different blade lengths, varying weights, and single-handed and two-handed hilts. Most are familiar with the late-Qing style jian with the characteristic down-swept guard.

No pictures of the boxes since I didn’t have my camera at the time. However, it was a cardboard box within a cardboard box surrounded by packing paper. Within the smaller box sat the jian, held in place by two foam rectangles. No damage at all from shipping.

Taking it out, all I could think was “Dang, that’s a nice scabbard.” I’d honestly expected something flimsier with maybe a too tight or too loose fit. Instead, I found a well-made rosewood scabbard with tight-fitting locket and chape. There was also an interesting setup for suspension. 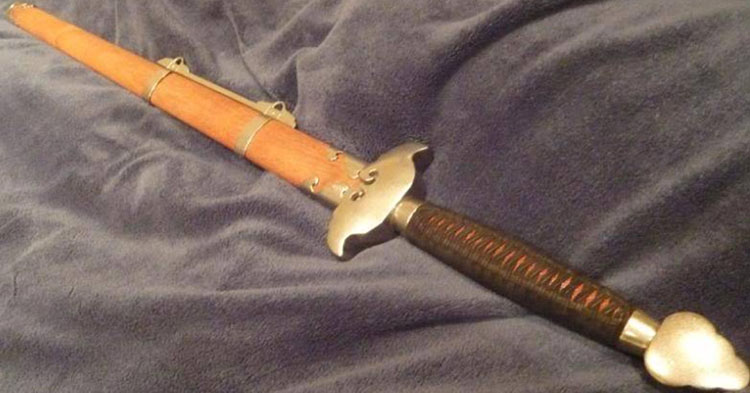 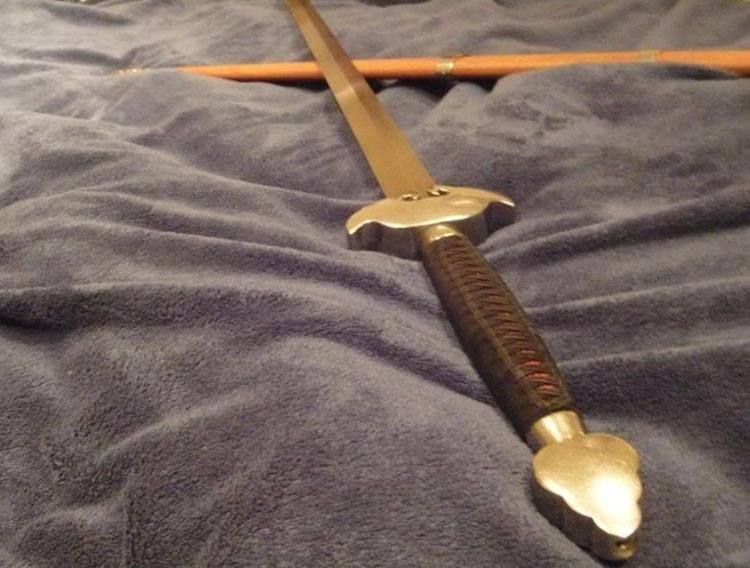 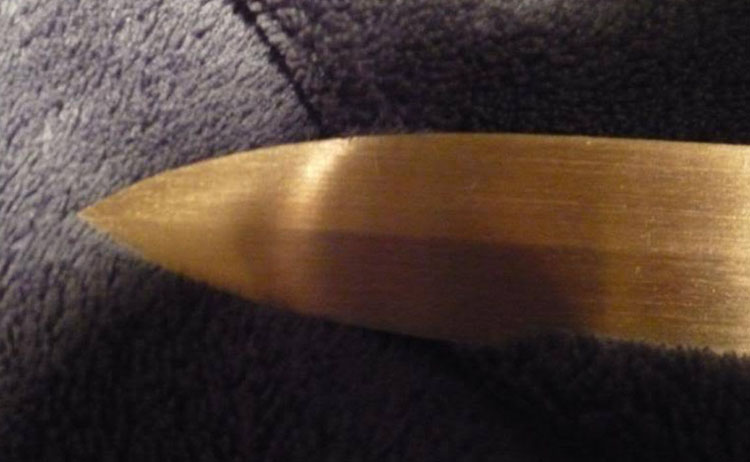 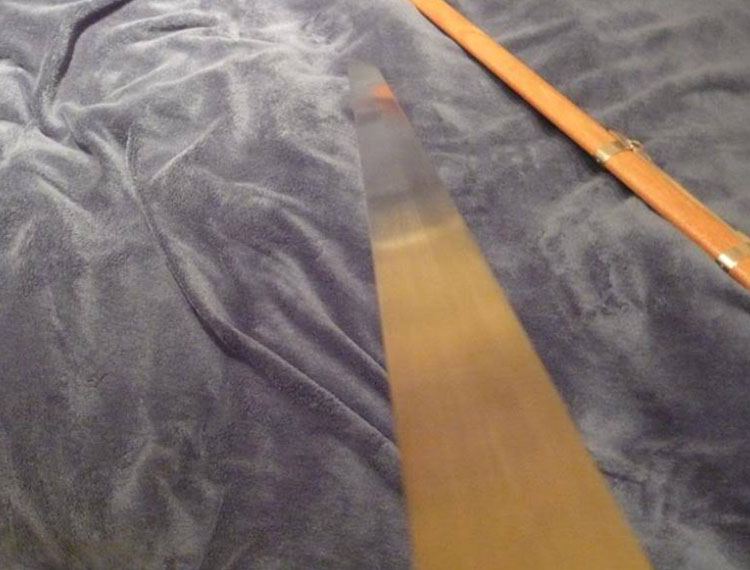 Very well done. It does have the traditional “clamshell” or “appleseed” geometry. The steel does seem different from typical Hanwei offerings, although I’m no metallurgist. I’ve heard that Hanwei is now using their own smelted steel for the jian as per Paul Chen’s decision, so maybe it’s that.

Fear not, Hanwei non-katana owners, it does come sharp. Sure saved me some trouble.

There’s a fair amount of flex judging from when I was wiping off the packing oil. (I’m not going to attempt a flex test. Sorry.) It’s not whippy at all though, unlike wushu blades.

Just a note that this is pretty much on the far end of the jian length spectrum. At 31 inches, it’s pretty long and despite a good weight and taper, you still feel that length when wielded. That or I’m really out of shape.

Honestly, when I first saw pictures online, the leather looked rather gaudy. Luckily, it looked better in person, at least to me. The wrap is very tight. I couldn’t find any movement at all. It also provides a very good grip, whereas bare wood as found on some jian gets a tad slippery during use. According to Scott Rodell, the handle is not traditional hardwood; instead, it is a resin in order to resist cracking. For those looking for something historically accurate, this may be a downside. However, for practicality’s sake, it’s fine for me.

It is notable, though, that it’s very long. As I learned it, a jian handle (ba) should be able to accommodate a hand and a half. On this jian, I can fit both hands comfortably and still have room. Then again, I have fairly small hands. Maybe someone with meathooks will find it the perfect size. 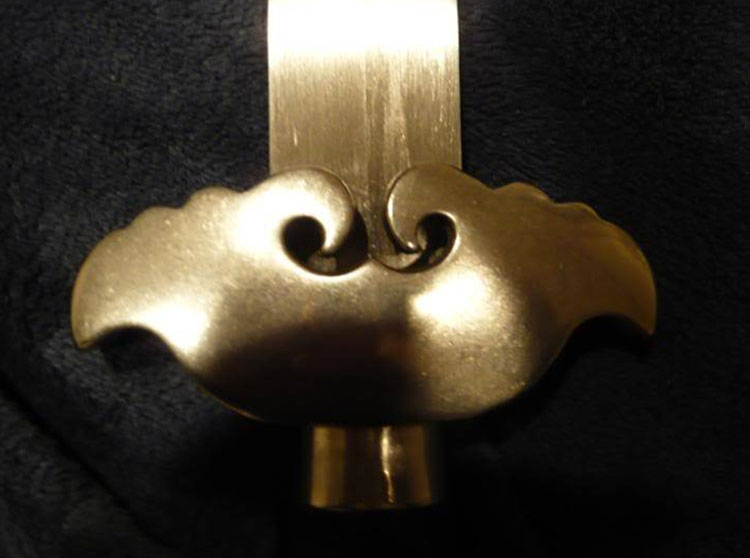 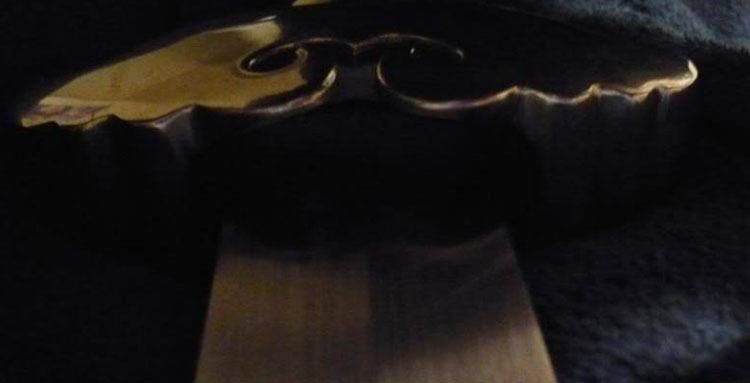 Not much to say. It follows the traditional later-period downward swept guards. Seems to be some sort of steel. Stainless, perhaps? 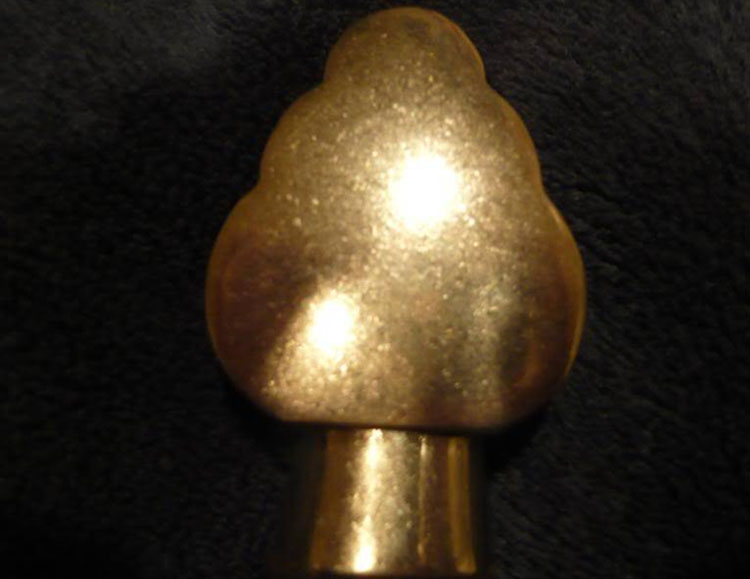 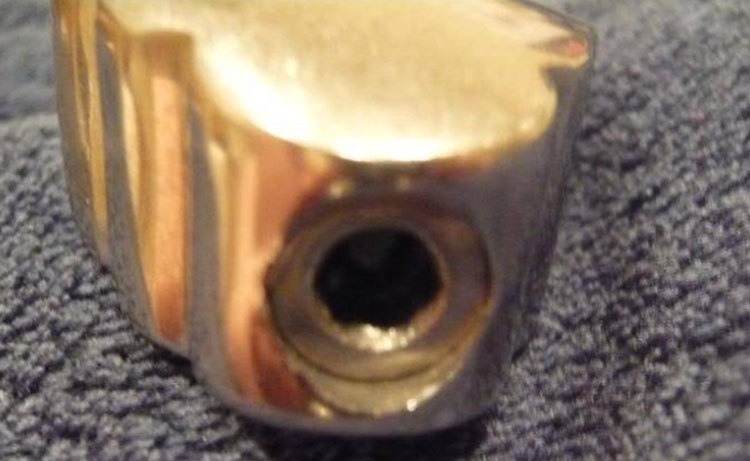 Steel, just like the guard. Recessed into the end is a hex nut for easy disassembly and maintenance. 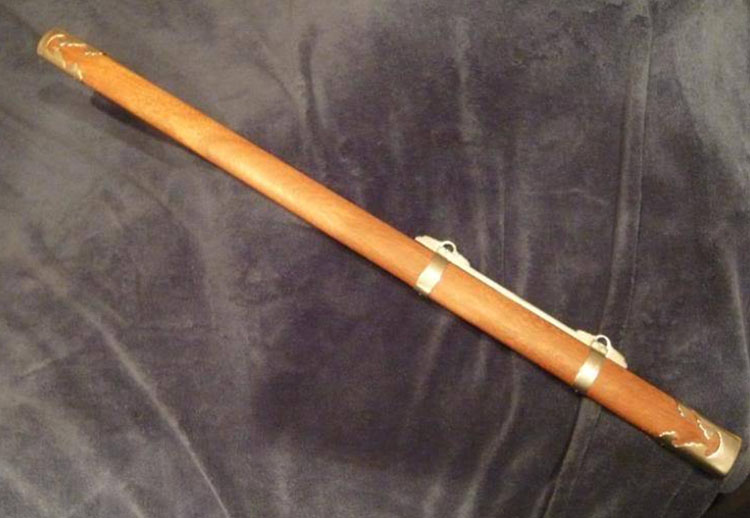 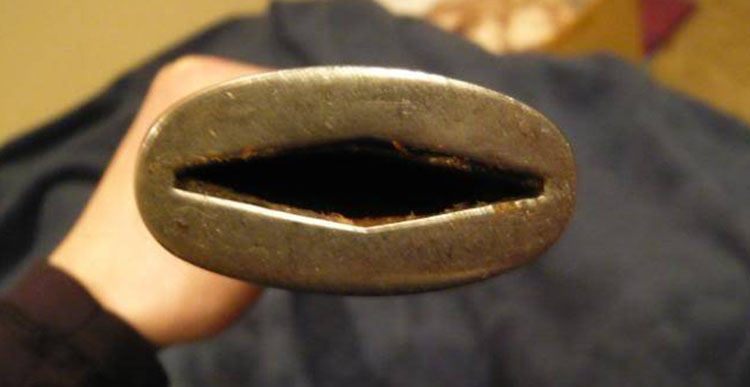 The scabbard is still possibly my favorite part of this sword. It fits perfectly, is made of beautiful rosewood while not being completely polished down for a rugged look, and has tight fittings. It’s a piece of art and a weapon in its own right, especially for the price.

It’s well known that Hanwei discourages cutting with its Chinese weapons line, and for good reason. The Rodell-designed cutting jian, however, fixes the construction problems that existed in the main line.

Let’s look at a comparison between the Damascus Tai Chi Jian and the Chinese Cutting Jian:

The Hanwei Damascus Jian (now discontinued) and the Cutting Jian

Before disassembly, it’s already noticeable how much thinner the Damascus Tai Chi Jian’s blade is.

Removing the pommel from the Damascus Jian

Pommel off and we already begin to see the problem with the old line. Believe it or not, that second nut on there is actually too large for the threading. 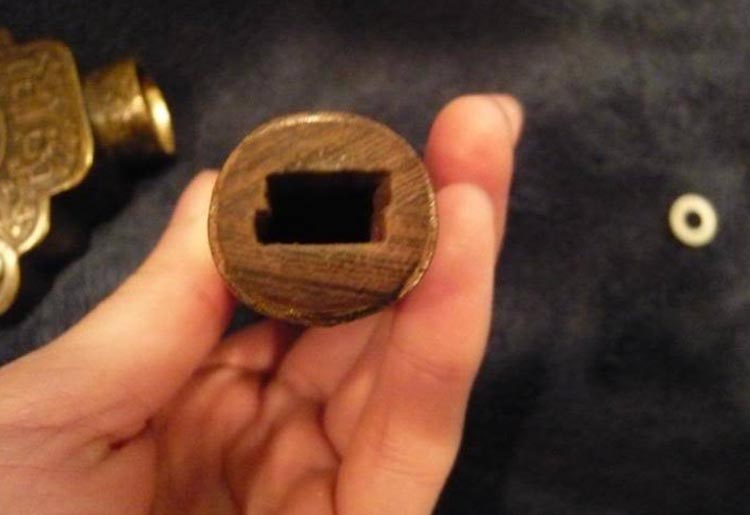 The grip isn’t horrible. It’s not hollowed out. However…

…the tang is just too thin to fit the grip. When the nuts aren’t secure, that grip can almost fully rotate.

Now here’s a look at the new construction: 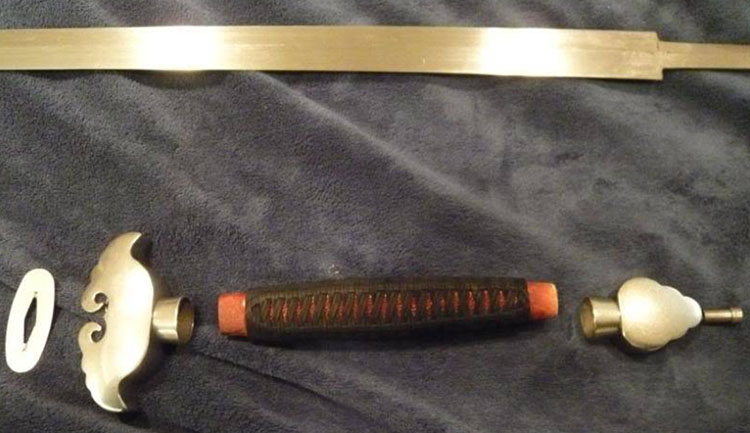 The components of the cutting Jian after disassembly

Still can be completely disassembled. 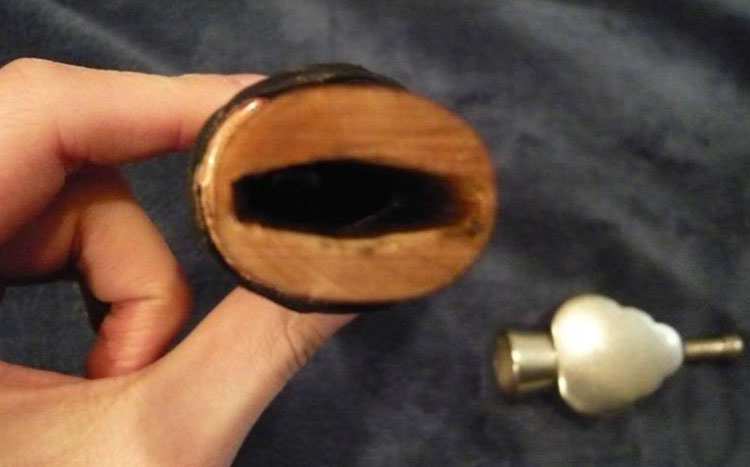 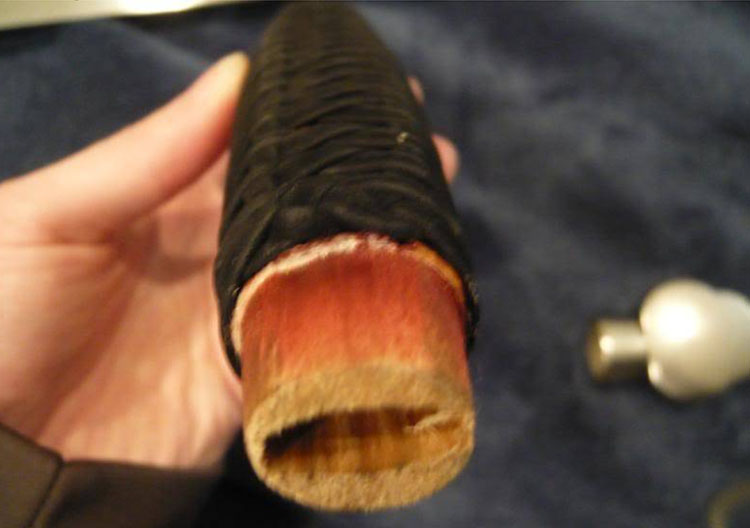 Seems to be one piece construction and is not hollowed out. It fits on the tang very snuggly. Despite being resin, I can’t tell. It imitates wood grain quite well. 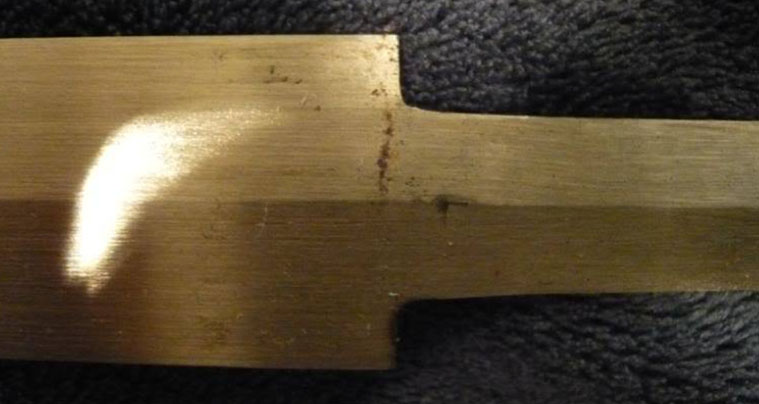 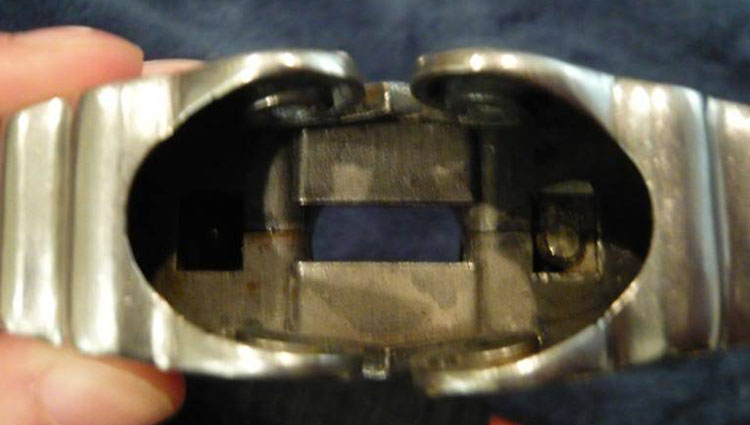 A quick look shows that the guard is hollow, which is true of many period pieces.
A huge improvement? Absolutely.

With the way the POB and the nodes of balance are set up, the jian is very maneuverable. Trying the “jiao jian” movement (that rotation around the POB that you see in wushu movies) and just some dry handling, it’s easy to get the sword to move as you desire.

However, with that length/weight, the feel is very different from lighter jian. Forearm strength/strong grip does help when wielding. Also, the POB does seem a bit close for its length. At 31”, it probably should be closer to 5-6 inches.

When Scott Rodell did test cutting with the A&A Jian, he mentioned that more force was required to cut with the traditional clamshell geometry in comparison to modern repro jian made with diamond cross sections. I didn’t particularly think so, although I found that edge alignment had to be absolutely perfect for a clean cut. I’ll have to spend more time with it when I’m not on lunch break and wearing a suit.

I admit that my form here stinks quite a bit. I was focused more on getting nice looking results. Probably could've cut through that last container too, except I kept trying to compensate for the extra inches on the blade. This resulted in shallow cuts a couple times.

Is it my dream jian? No. I’d prefer a shorter handle and an inch or two off the blade. Is it good though? Oh yes. The blade geometry is accurate, the fittings are still tight after use (and some abuse, I admit), and the scabbard and blade make it worth more than the 300-ish price level. When the Rodell-designed dao comes out, I may have to pick one up as well.

For the CMA practitioner or jian enthusiast, there aren’t that many options for a jian when you’re on a budget. The $300-level production jian market is pretty much left to Kris Cutlery, Cold Steel, and Hanwei. Would I recommend this over the others? Absolutely. It’s a jian designed for practitioners by a noted practitioner/teacher/collector, and it definitely delivers.

The MSRP on this sword is $490 which is probably a bit too expensive for what it is - so we sell it at the best discount online for just $329.99 here at the SBG Sword Store. The only problem is that it is not often in stock - so the only other place that regularly stocks it that we can recommend is here at Swords of the East - though it is considerably more expensive there at $441..

I hope this review of the Hanwei Scott Rodell Cutting Jian has been helpful. To return to Chinese Swords from Hanwei Cutting Jian Review, click here