The Dadao (Mandarin for 'Big Knife') by the Hanwei Forge is easily one of the most affordable and impressive low cost functional Chinese swords on the market, and is a traditional blade based on the agricultural knife and comparable to the European Gross Messer.

With a price tag under US$200, there is little doubt that there is a lot of good quality, well tempered steel in this sword for what amounts to be a very reasonable price.

In this review by regular SBG contributor, G. Scott Hoagland, we will be taking an in depth look at this monstrously large peasant warrior chopping sword that clearly conjures up images of severed heads from the boxer rebellion or the war against the Japanese in the 1930s, where Chinese militia used it with great effectiveness at close range...

Though my primary interest is in medieval European swords, this particular piece caught my eye the first time I saw a photo of it online.

"In photos, at least, the sword struck me as looking particularly aggressive and well suited to the cutting style to which I'm most accustomed..."

This sword retails for between $143 and $200USD, depending on where it is purchased and in all honesty, considering this swords low purchase price, I wasn't getting my hopes up prior to receiving it.

I was expecting more than a wallhanger, but possibly a slightly lower level of quality than I've come to expect from swords that retail in the $150 to $300 USD range.

The sword arrived wrapped in paper inside a white cardboard box, which in turn was inside a packing peanut filled brown cardboard box. Upon removing this ample packaging, I was immediately struck by the swords overall appearance.

"It was much nicer than I had expected..."

The nylon cord wrap on the handle was evenly done and very tight.

EDITORS NOTE: The correct terminology for the blade collar is 'habaki' in Japanese and 'Tunkou' in Mandarin and serves as an interface between the blade and the hilt.

The blade had a quite scratchy finish, but it is very evenly executed and attractive in a utilitarian sort of way (reminds one of the finish on a high quality machete, though a bit more refined) , and the brass cross guard and 'habaki', or blade collar (I dont know the specific Chinese swords terminology), were fairly smoothly finished, if somewhat unremarkable and plain.

The Dadao also comes with a black nylon blade cover, which is quite thick and heavy duty and well sown together, and it appears to be thinly padded in some way. The cover is open all the way down the back side, so that it just slips over the whole blade all at once.

Also, being nylon, one can leave the sword stored in the cover without fear of it drawing in moisture and corroding the blade, as can happen with a leather sheath or scabbard.

THE DADAO IN USE 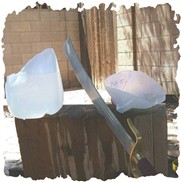 The stated weight for the Dadao is 2lbs, 5oz. When I weighed it on my kitchen scale, it came out to about 2lbs even. The sword is described as having a weight forward bias.

I found this to be quite accurate.

While the term blade heavy usually has a negative connotation in the world of swords, it isnt necessarily so in this case.

This sword was not intended for finesse work by highly-trained soldiers, but as a heavy duty hacking weapon for use by armies of peasants, according to the official blurb.

"As such, the Dadaos handling and balance (Point of Balance is about 5.25 from the guard) seem right where they should be..."

The blade is made of high carbon steel and appears to be very well tempered.

I was able to embed the last 2 or so inches of the blades edge into the top of the glue laminated wood beam section that I use as a cutting stand and flex the blade both ways about 4 out of line, with the blade returning to true each time.

Underneath the cord wrap, the grip is made of some dark stained, almost black, hardwood. The resulting grip has a somewhat oval or oblong cross section, which is quite comfortable.

Im not sure how its attached to the blade, though my guess would be that its epoxied to the tang in two halves.

The handle is about 14 long including the pommel ring, so it provides more than enough room for a two-handed grip. This is important, since, despite what is said in the official blurb, this sword is quite awkward to use with just one hand, probably due to its Point of Balance (POB) and handle length.

Since the blade was shipped with a sharp edge, I was able to do some cutting with it right from the start. I should note that the factory edge is sharp enough to easily cut with, but it isn't razor sharp...

"However, a few swipes at the butchers steel, and this Chinese swords blade became frighteningly sharp..."

Actually, if you are cutting anything heavier than plastic bottles or pool noodles, Id advise not overly sharpening the edge. Given the blades rather thin cross section, you risk chipping the edge on harder targets if its too sharp.

For actual cutting, I used both 1 gallon milk jugs and 2 liter soda bottles filled with water, as well as water soaked, rolled up newspaper. The Dadao cut these targets with ease. With a properly aligned cut, theres essentially no resistance felt as the blade passes through the target, and the cuts are clean and even.

This is where the swords weight forward bias and two-handed grip really show their worth. Cutting light targets with the Dadao is a breeze.

Also, since the blade has a uniformly rough, utilitarian finish, it is quite simple to eliminate any scratches that may result from cutting by rubbing a maroon (very fine) or gray (ultra fine) 3M Scotch Brite pad along the length of the blade.

Overall, I have been very impressed by the Dadao, both in fit and finish, and in cutting ability.

Because of the blades thin edge, I am hesitant to use it on hard targets, but for cutting lighter targets like the aforementioned plastic bottles and newspaper, etc. it is right at home.

The cord wrap on the grip has remained tight after numerous cutting sessions and has shown no signs of fraying, and the blade has remained true. Considering the swords solid and simple construction and well tempered blade, it is a fine choice for anyone interested in owning Chinese swords.

The Hanwei Dadao retails for US$200 and most sites sell it for a bit less, but only by around $20 at the most. However the Dadao is available at the very best price on the internet for only US$143.95 here at Kult of Athena

I hope this information on Chinese swords has been helpful. To return to Fully Functional Yet Inexpensive Chinese Swords from Hanwei's Dadao Sword Reviewed, click here