The Dark Sentinel by the Hanwei Forge is a Fantasy sword classic.

Not only is it a seriously functional blade with a price tag of between just US$119 to $159, but its unique blend of Japanese Katana and European duelling sword with a distinct fantasy appearance makes it a must have for every collection.

In this review we will be taking a look at this sword from the perspective of two different collectors, with one reviewer giving it a tip to toe look over and the other, thrashing the heck out of it to test both its cutting power and durability.

And it would seem that while it is not perfect, no matter which way you look at it this sword is a real gem.

Another sword that's been at Goodwin Manor for sometime. It is really my son's, which he asked for on his 13th birthday (right of passage comes to mind) and he's now 17.

This sword has gotten a heck of a work-out over the last 4 years. It's been used to cut with more than any other sword in my collection. When visitors come to our cutting parties/gatherings and get the itch, we give them a crash course in form/safety, send them to the pell with a waster for 15-20 mins. to practice that form, then when they feel they are ready...hand them the CAS/Hanwei Dark Sentinel.

From that point on, most are usually hooked.

The CAS / Hanwei Dark Sentinel is listed as a fantasy sword in their catalog. I like to consider it a hybrid - part katana (handle) part Swiss sabre (blade). But mostly it's just a fun sword.

Again, resembles that of a Swiss sabre, long, slightly curved. A very thin blade compared to most, with practically not distal taper.

It's quite flexible and sturdy at the same time. A satin brushed finish to it is a nice touch, no fullers, but none are needed due to the weight (or weightlessness I should say) of the overall sword.

Possessing a deadly tip, this always brings an "oooo" "aaahh" when unsheathed and used at demos.

It's long.....very long and takes some time to get use to. But in the same frame, it helps with the control of the sword, especially for people who handle / use a functional sword for the first time.

Covered in suede leather with studs inserted along the length, it makes for a nice feel. There are two metal pins/ screws that are also present tying into the katana-ish aspect of the grip/handle. 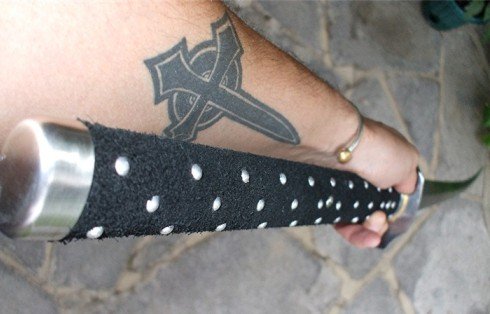 Well what can I say except simple. Just a cap over the end of the grip to cover the tang & grip. 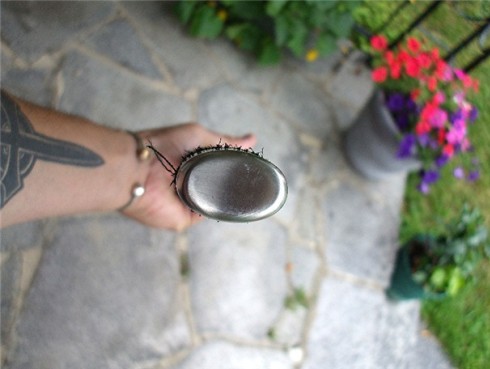 Again , a simple psuedo-tsuba type guard. On mine, over the years of use and abuse, it's become loose, so I took a very, very thin wash, cut it in half (half moon shapes) and placed them between the guard and grip as shims. It holds it all rather well. 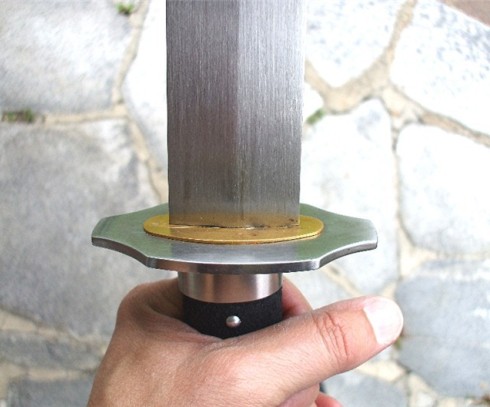 This is one thing CAS/Hanwei could have put a little more into. Its a resin formed cover basically. Doesn't fit that great , the drag started to come loose in no time (hence the black electrical tape) and the odd ball cut-out at the chape. Mine has started to split (more electrical tape) at the odd-ball cut-out. But I have to remember the amount of use this thing has had too.

As mentioned before this particular sword has been extensively used and a good reason..... It's one heck of a cutter. We've used it on milk jugs, 2 liters, small water bottles, pumpkins, cantalopes, cabbages, watermelons, cardboard tubes, etc. It's even carved up 2 cutting stand platforms from not so great aiming, split 2 x 4 's in half......

Just a fun, fun sword to cut with.

Thrusting is also a easy task, though I forgot to include in the video clip (yeah I'm a wally). The hellish point on this thing is great fun as well to poke stuff with.

All in all I really like this sword just for the fun factor of it. Not historical and doesn't claim to be, but we've had a blast with it and will continue to do so.

Hi, it's Robert Betts again of the wee small hamlet of Valley, AL. Looks like its time for another review, this time I'm pitting my Hanwei Dark Sentinel versus my ever dwindling supply of pine tabletops (All contributions to the pine fund welcomed- make checks payable to the ... nevermind, just send cash).

This one has no historical provenance, a fantasy piece pure and simple. I picked up mine second hand on eBay, but you couldn't tell it was used  pristine condition when it arrived. What a nice change.

I wasn't quite sure what to expect when I received it: from the pics it looked like the bastard step child of a katana that wandered out west, or maybe some weird idea spawned from one of Marco Polos adventures. Which appealed to me, so...

Well, on to first impressions. First off, this sword is BIG. Definitely falls in the two- handed category.

Second of all, it is light for its size. And I mean LIGHT. As in, this is steel, right? Not aluminum? I have daggers that weigh more...

Thirdly, the scabbard is somewhat unusual. Its wooden cored and supplied with steel throat and chape, and supposedly leather covered. This covering though lacks the feel of leather. Its very rigid, very hard, almost like its a leather paint applied directly to the wood. The scabbard is also inletted along the spine for approximately 4.25, to aid in drawing and in sheathing the sword. This looked very odd at first, but is very practical. Without it, the sword would be almost impossible to draw one handed. 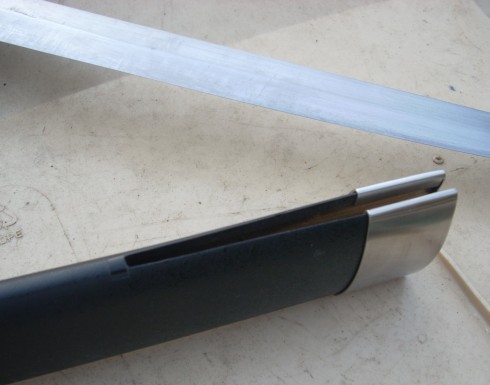 Fourth thing I noticed was the placement of the studs along the grip- different/asymmetrical patterns on either side. Perhaps thats the way it was meant to be, but its a negative to me (But a minor aesthetic one.)

Straight out of the box, no sharpening prior to cutting. Have at thee, pine! 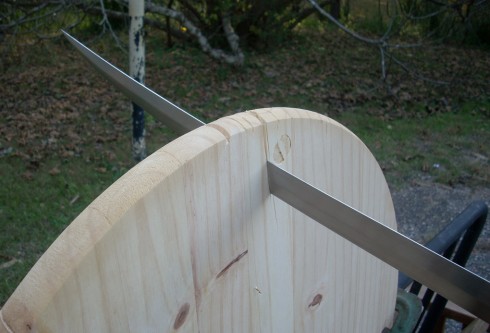 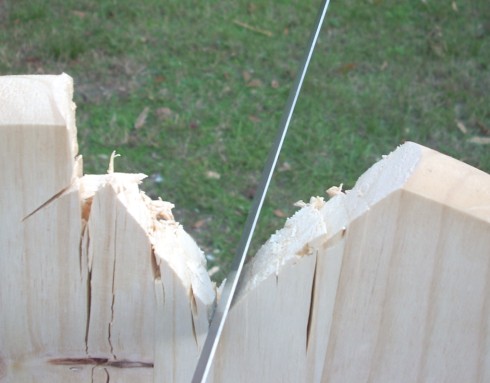 Oops, got a bit carried away 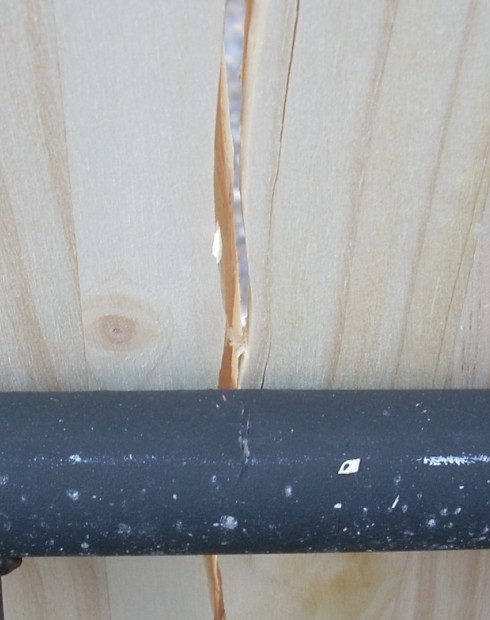 It handled all the cuts very well-Even when the target split and she bit into the iron support bar (ye olde oops above). No edge damage, no rolling.

The thrust tests revealed a little bit of tip deformation after the 4th or so time. Disappointing, but easily rectified with a ball peen and an anvil. Even so, she consistently had .75" penetrations. (wait, that doesn't sound quite right).. 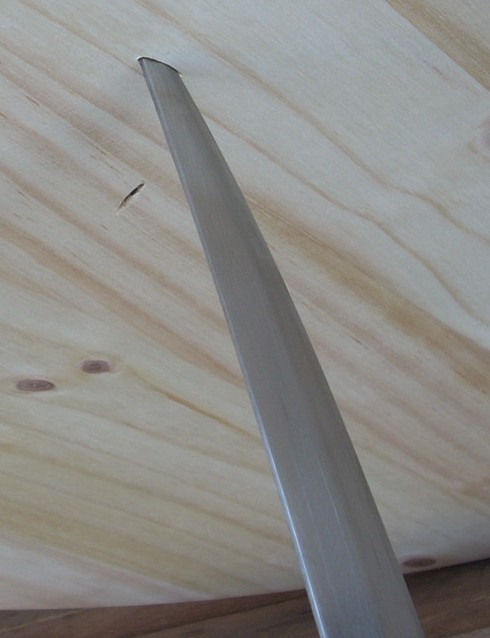 Afterwards, I gave her a quick edge with an accusharp and went at it again for another hour or so. No change in performance at all.

One thing that stuck out in the testing regarded the COP, thus the * above). The 19.5 reflected where it felt natural for me to strike with the blade. The blade itself gave no nasty feedback vibration regardless of where I struck the target with it- First third, middle third, last third- didn't matter. Also, as thin and as long as this thing is I expected a lot whippiness- wasn't there.

It's flexible as a buggy whip when you flex it (it will do a 5 flex, no problem), but stays rigid otherwisenice.

Both Bill and Robert got a lot of enjoyment out of this durable, unique and very interesting fantasy sword. And especially considering the low price point, this blade would have to be a must have for every collection.

Prices on the Sentinel vary online, but the best place to buy them for the best price consistently online is HERE at Kult of Athena, where they are available for a ridiculously low US$124.95 (at this price, EVERY fantasy sword enthusiast should have one of these - in fact as far as value for money goes - I can't think of anything that is much better!).

I hope this double review of the Dark Sentinel Sword has been helpful. To return to Decorative and Functional Fantasy Swords from Hanweis Dark Sentinel Double Review click here