Where to Find Replicas of Egyptian Swords (for under US$300)

Unfortunately, if you are looking for modern day replicas of Egyptian swords, you are pretty much out of luck...

Well, almost out of luck anyway.

Despite obvious demand for these replicas, there are only a handful of authentic Egyptian style swords available, and of those, only two within our target budget of US$300... 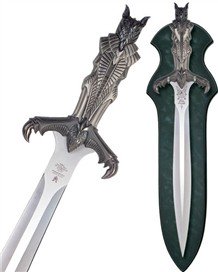 If you google "Egyptian swords" nine times out of ten you'll probably end up looking at the so called "Bast Egyptian Short Sword" by United Cutlery (pictured left).

While this sword looks nice enough I guess, it should go without saying that it is pure Hollywood all the way. I'm not going to say too much more about this one, since being stainless steel with a rat tail tang, it's most definitely a "sword like object" and doesn't have any functional capabilities that redeem it whatsoever. But what makes it worse is that the images are of a product that basically is not longer available to purchase - which just goes to show you lack of 'mass market' appeal in true Egyptian swords (i.e. nothing has really come along with an Egyptian theme to replace it)..

But dig a little deeper and we at least get close to something half decent..

What constitutes an authentic Egyptian sword? 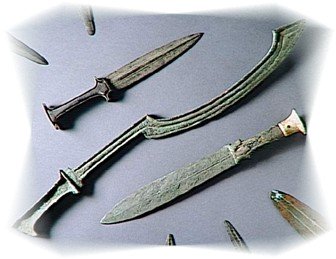 According to the archeological record, the Egyptians did not actually use swords very much at all - at least not for military purposes (though longish daggers/shortish swords were fairly common in civilian and political life).

However, the major exception to this rule were the Egyptian swords known as the Khopesh - the cruelly curved sickle sword adopted from the Canaanites, which was used to execute en-masse their enemies, as an infantry weapon and also as a symbol of the authority of their nobles and even the Pharaoh himself.

While they weren't easy to find, over the years I've managed to track down a few of rare carbon steel blade replicas made by Indian based sword maker Deepeeka.

As far as fully functional Egyptian swords go, Deepeeka of India make some good ones in this price range. Originally, they had two models - one quite plain and functional looking, and the other with very heavy and ornate brass fittings. 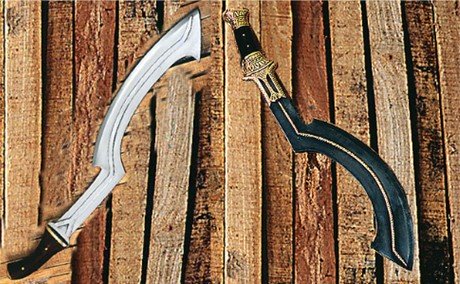 While it looked very nice - it really was a bit too heavy for anything other than as a demonstrative, education object to introduce people unfamiliar to Egyptian swords what a Khopesh looks like and how it was used on the ancient North African battlefields.

However now, there now is the 4.4lb, 25" bladed Egyptian Khopesh available HERE at Kult of Athena for just $129.95

The 'Egyptian Khopesh' by Deepeeka of India is an affordable, carbon steel replica

It's definitely still on the very heavy for its size side, however it's sturdily made and a good candidate for further decoration and refinement (as you can see from the image above, it is a little rough - but what can you expect for less than $150?

P.S. Since quite a few people have asked me about it in the past who are just looking for REALLY cheap Egyptian Swords for display purposes only, there's one for $24.95 HERE at Kult of Athena. It's not amazing looking, and doesn't even come close to any of the others shown here so far, but it's ok for a REALLY cheap ornamental Khopesh style sword (though I think that the Deepeeka Khopesh is on the whole much better value)...