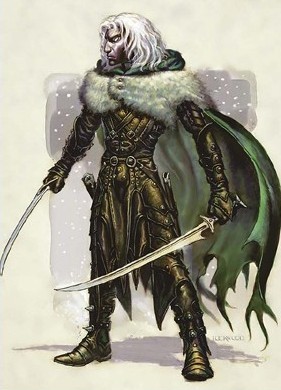 The Dark Elf Sword Twinkle was one half of a pair of functional carbon steel twin blades from the Forgotten Realms books created by R.A. Salvatore and brought to life by Windlass Steelcrafts

Wielded by the anti-hero, Drizzt Do'Urden (pictured left), Twinkle and Icingdeath were both supposedly based on scimitars, and indeed the differences between them are only in the cosmetic appearance of the fittings, the blades and overall design are identical.

In this hands on review of these discontinued swords, I will be taking a good look at these replicas from tip to jeweled pommel, and trying to determine why these Elven blades have been on the market for so long by a company that is notorious for rapidly changing its designs.

Plus as a side note, well also try to figure out why the heck someone would name a sword twinkle in the first place... ;-)

There isn't much point reiterating the back story of Twinkle and Icingdeath, nor Dark elf turned good Drizzt who wields them both at once in an ambidextrous slicing fury. For anyone who doesnt already know, this wikipedia article should bring you up to speed.

Suffice it to say that these blades both conform to the commonly held fantasy ideal of what an elf sword would look like, with the single edged, somewhat scimitar like appearance also echoed by the blockbuster movie adaptation of Lord of the Rings.

More on this shortly. But lets take a quick look at what to expect from these blades.

The elf sword arrived in a nicely presented themed box that is surprisingly sleek, and a cardboard certificate of authenticity digitally signed by the artist and author who approved the design respectively (that, incidentally, doesn't fit inside the themed box, so is either sent separately or folded up  no big deal either way really).

Upon opening the box and removing the sword from its Styrofoam packing, I took some time to look it over.

As to be expected, it looked the same as the sword on the outside of the box. So lets give this elf sword a good once over, starting with the fittings.

The most distinctive part of the handle is the star cut blue sapphire  which is of course NOT a real sapphire (dont we wish!) but rather some kind of synthetic resin. 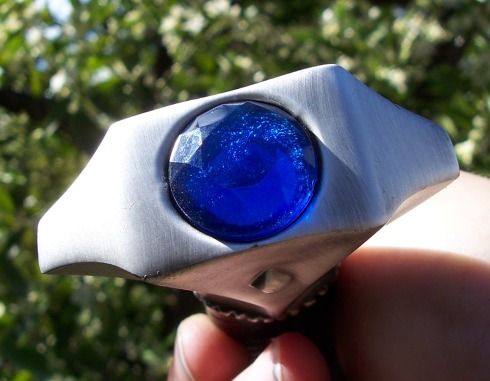 Its not bad looking, but it isn't that amazing either and certainly doesnt look anything like the real thing.

Moving on, the rest of the hilt is actually very nicely done. 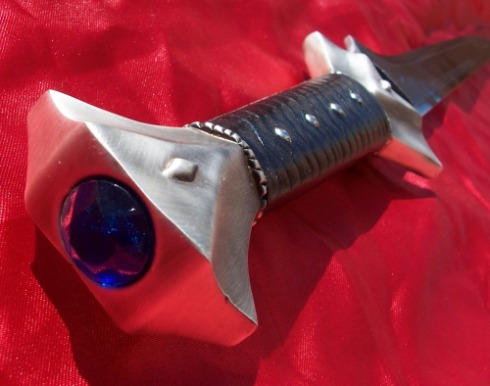 The pommel itself is somewhat triangular, with silvery highlights (silver plated apparently) and a darkened, satiny undertone that really highlights its sharp, angular shape. Two embossed silver diamonds stand out on each face of the broadest part of the pommel and the assembly terminates with an attractive circular segmented pattern.

The hilt is real leather with a criss-crossing pattern that simulates a leather wrap, without a leather wraps inherent problems with coming loose with extended use. No stitching is visible, but there is a subtle seam down one side. Four steel rounded studs protrude on each side of the leather  both are very even and smooth, and when handling the sword they are not felt and do not pose a problem.

The hand guard itself, if you can call it that, is 2.75 across  only a fraction more flared than the pommel, but matches it perfectly, giving it an eye pleasing symmetry. 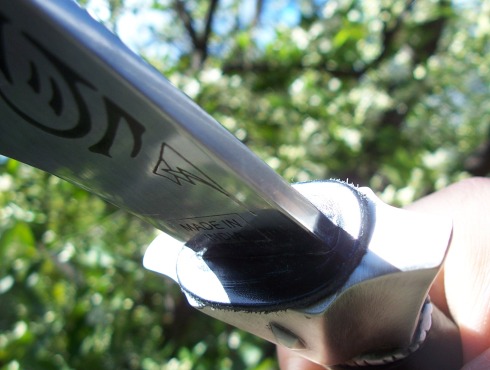 The only thing I dont like is the leather spacer and the usual Holographic Windlass Logo and Made in India stickers on the blade just above the guard. 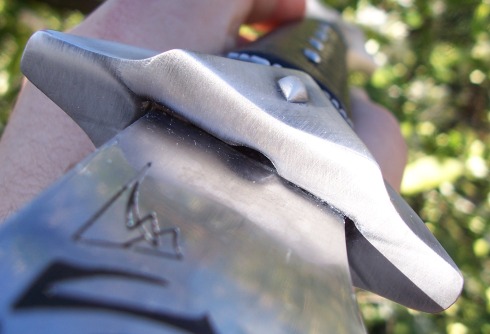 All of these can be easily removed, and indeed, once they were I immediately liked the look of the sword much, much more!

However, of greater concern, the fit of this thing is terrible. 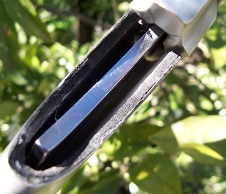 The gap between the throat and the ricasso of the blade is big enough to fit another sword in there and it rattles around horribly, which isn't something you would normally associate with an elf sword.

Overall, its better than nothing and looks good on display if you keep the leather clean, but it could have been a whole lot better.

It also comes with two suspension loops, though you need to buy the sword hangers separately if you wish to wear it. Twinkle is designed to be worn on the left hip and its brother Icingdeath on the right.

No fantasy elf sword would be complete without some elvish script on it, and both Twinkle and icingdeath are no exception to this rule. I'm not actually sure what the script is meant to say, perhaps something along the lines of laugh at this swords name at your peril  but it certainly looks convincing and is something of a trademark of the artist, Todd Lockwood. 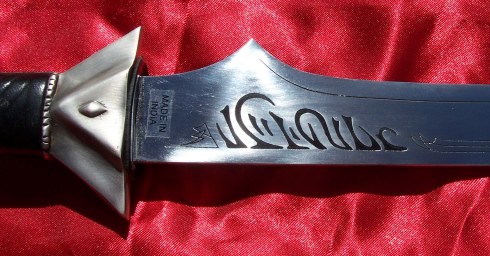 There is also a thick spike at the Ricasso, which has caused me endless confusion when drawing it. For some reason, I keep feeling that this is on the back of the sword, not the cutting edge, and tend to draw it the wrong way around unless I think about it carefully. Then again, maybe thats just me...

Anyway, moving on - I mentioned before, scimitars seem to be a popular representation of what an elf sword might look like. However, while this may have an elf sword feel, a scimitar it is not. And what is interesting is that the books by R.A. Salvatore clearly describe both Twinkle and Icing death as being curved  however, as you can plainly see from the pictures below, the blade is straight  only starting to curve at the cutting edge in the last 6-7 of the 30 blade. However, the spine remains almost completely straight the whole length... 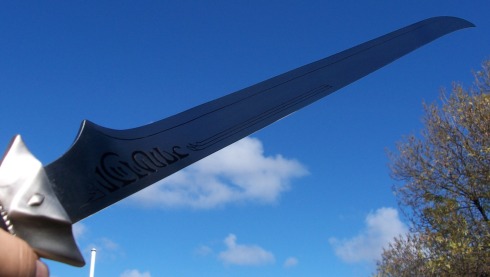 Apparently, this misrepresentation started with the original designers of the books cover art, who drew the swords straight despite the books description, and once it had been drawn this way, the design stuck. 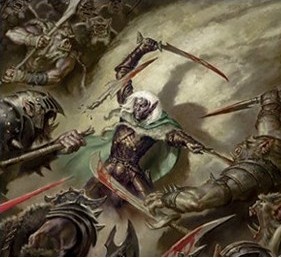 Unfortunately, this means that this sword has no historical precedent, which while on one hand makes it unique, also means that after centuries of warfare, if no society in history had used this kind of blade, chances are there is something wrong with it!

And indeed, from a handling point of view, it isnt quite right. Weighing 2lbs 5oz on my scales with a point of balance barely 4 from the crossguard, it simply doesn't have the kind of grace you imagine when you think of an elf sword.

On the positive side, the polish is excellent, the quality of the steel very good and the tempering up to Windlasses usual very high standards, though thick enough that it doesn't have a trace of whippiness that some of their longer swords are well know for.

But the problem is, an elf sword, at least in my mind, should flow easily from one movement to the next. But Twinkle doesn't quite make it  its just a little too heavy overall, and the balance just somehow feels a little off. Its not a huge thing, but it should be a little lighter than it actually is to really qualify as a good handling elf sword.

However, the big question is  since this is a functional sword made from tempered high carbon steel, how does it cut?

Of course, being a Windlass sword, the plain vanilla version comes with an unsharpened blade, though it isnt far off from being sharp with a 1mm edge  it only took around 10 mins with my trusty accusharp to give it a razor sharp edge.

Considering the sharpening service typically costs around $18, which is around the price of almost 2 accusharps  it is much more cost effective to do it yourself and is easy enough that anyone can do it (click here for my quick and dirty tutorial on how to use one  they are especially good for Windlass swords).

Anyway, once it was sharpened and ready to go  I took it to some light targets, including tatami mats and water filled bottles.

Surprisingly, while not every cut was perfect, the unusual blade geometry worked quite well.

Thrusting was also very rewarding, going right through a standard thickness tatami mat, so perhaps the handling isn't really so bad after all?

I also tested it a couple of times into a woodblock, though with the fittings being quite small and delicate in an elf sword way, I wouldn't recommend this blade for heavy usage.

Though for tatami and waterbottles, its actually quite some fun to use!

Overall, I like this elf sword. Its definitely unique, and it cuts very well once sharpened. Handling could be a tad better and it could be a little lighter, but the overall appearance of this sword along with its functional capabilities and relatively low price tag (depending on where you source it from) makes it a worthwhile purchase.

The only thing is, why the heck is it called Twinkle..!

Supposedly it is called twinkle because, under a certain light the version of this sword from the books sparkles with starlight. Try as I might, I couldn't get it to sparkle quite like that, though the highly polished reflective surface did indeed catch the sun rays quite well as seen in the video. And Icingdeath sounds like what happens if you overeat cake...!

But if you can get past the name, if you are a fan of the Forgotten Realms books or games, or just looking for a functional elf sword, it isn't perfect but it isn't all that bad a buy either.

Twinkle and Icing Death have both been discontinued by Windlass Steelcrafts after several years in production and are now almost impossible to source anywhere. There are some stainless steel knock offs that briefly surfaced to fill the void, but as expected the quality is lacking and now the only way to get an authentic replica is to either get lucky on the secondary sword market or to commission a custom sword design yourself.

I hope the review of this elf sword has been helpful. To return to Decorative and Functional Fantasy Swords from Elf Sword Review  Twinkle, click here