The Medieval Falchion by Windlass Steelcrafts is a reasonably historically accurate replica of these massive, ax-like swords. And while it might not be the very best example of its type out of the box, with a few modifications SBG contributor Mike Harris was able to turn it into a quite a mean battle ready piece with outstanding cutting power and penetration...

I've always been attracted to Falchions but have never gone to the expense of owning one. There were always other more glamorous swords I wanted to buy. The more I read about them and what a workhorse of the medieval battlefield they seem to have been, the more I wanted one. I finally broke down and ordered the Medieval Falchion made by Windlass Steelcrafts.

My first impressions after unwrapping this sword were of something that was longer than I anticipated, very blade heavy, and uncomfortable to hold and swing. The fit and finish are fairly well done. The handle, guard and pommel are tight and seem well fitted. but after further use the guard has begun to show a tendency to shift.

Upon close examination it is apparent that the slot milled into the front of the guard is about twice as wide as necessary. This slot, milled about 1/3 of the way through the guard, allows the ricasso to extend a bit back into the guard. In theory, this slot should work to keep the guard tight through much abuse. Unfortunately, Windlass made this slot about twice as wide as the blade. This allows the guard to rotate enough to allow almost an inch of movement at the tips of the guard.

The handle is still tight on this sword after 5 cutting and pell sessions. But if it ever becomes loose this sword may begin to sound similar to a baby rattle. That will not be good. 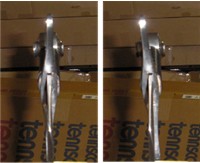 Here you can see two views of the sword from the front. In these images, the guard is rotated left and right to it's extreme limits of travel.

Notice the different location of the top of the guard in relation to the pommel.

The stitched grip really put me off as the stitching was very obvious, both visually and to the touch.

The seam protrudes from the underside of the grip and digs into my fingers. The circumference of the grip is also quite small. Together, these two features conspire to make this a rather uncomfortable sword to work with. I immediately determined this would be one of the first things I would change about this sword. More about that later.

The pommel is about 1.950" in diameter and is pretty consistently round, with no discernible flat spots except where it meets the grip, which is appropriate. It is 1.285" thick in the center section and is scalloped to .700" at the edge.

Overall, this makes for a very pleasing pommel with plenty of geometry to keep it from being in any way boring. I have not disassembled the hilt, but the pommel appears to be threaded on as there is absolutely no indication of any peening at the rear. 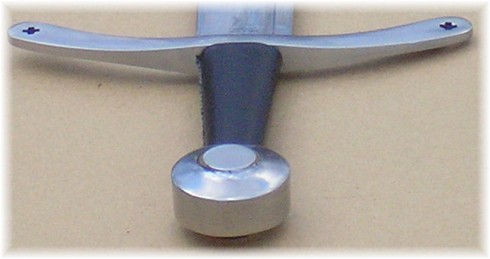 It fits tight with no movement whatsoever. It curves in a smooth arc with no bumps or flat spots. The only flaw I could find is that the crosses inlet into the tips are a bit off. The interior corners are not square and give it a bit of a sloppy look in that area.

But that's kind of nitpicking on a piece in this category, and these flaws are not visible at first glance.

The blade came highly polished and lacquered. It did not come sharp. The edge was noticeably rounded, but ready for sharpening with some effort. After sharpening it I would guess the hardness at somewhere around 48 to 50 RC.

It had obvious waves in the surface, but nothing out of the ordinary for a sword in this price range. The blade was plenty thick and very rigid, measuring .163" at the spine. It has no taper until you reach the widest part of the blade. This area, which is the location of the little "hook" shape sticking up from the top of the blade, is also the exact center of percussion as that's where the front node of vibration is located.

From that point, the blade has a straight distal taper to the point. As you would expect with a sword of this type there is absolutely no "whippiness" to the blade.

I tested its thrusting capabilities on my tire pell. With a normal-power single hand thrust from the hip the blade penetrated the sidewall until the tip was embedded about half way through the offside of the tire. This is just about as good as I have seen with any blade that has a significant cross section.

I would rate this as outstanding penetration.

I also performed a very limited cutting test consisting of two 20 ounce plastic soda bottles filled with water. Both cuts were clean, leaving an inch or two of water in the bottom portions of the bottles.

I intend on doing a lot more cutting with this sword, as I like the way it cuts and I want to find out how it performs on heavier targets. 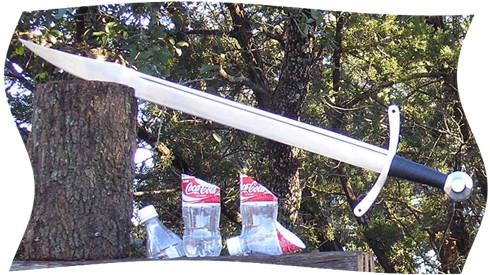 The accompanying scabbard is pretty much like every other I've seen from Windlass. It's black glossy leather with highly polished steel tip and throat. Except this one seems to have been squeezed just at the lowest point on the metal throat.

You could easily see a spot that was pinched in the middle by looking into the opening of the scabbard. The sword had to be forced into the scabbard and it took two hands and a concerted effort to draw the sword after it was in the scabbard. This was quite annoying and required a bit of effort with a 1/4" diameter brass rod to expand the opening to proper dimensions so the sword blade fit properly. 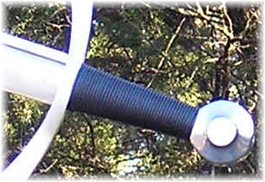 To address the uncomfortable and unsightly grip, I decided to wrap it in 3/32" black leather lace. I hoped this would provide a much more comfortable interface with the handle and increase the circumference to about the right size for me.

I won't go into the detail of the wrapping process, but it is very easy and only took about 20 minutes. The end result is a very pleasing grip that fits my hand and drastically improves the way this sword feels. It literally feels totally different with the grip wrapped. I will definitely be adding this to any MRL swords I own which have the uncomfortable stitched grip.

With further use on the pell, a bit of a problem with the blade has become apparent. I don't know if this is an issue of improper temper. It could be due to the the blade being overly long, with the heaviest section near the tip. But with the exception of length, that is the way all Falchions are designed. In any case, when striking the pell I occasionally impact at oblique angles where the blade makes a slicing cut instead of a chopping blow. When the blade impacts a tire solidly and stops it has a tendency to exhibit a lot of vibration.

During the last session I noticed the blade had begun to twist along the length of the edge. This twist imparts a sort of spiral effect to the edge. The thicker spine did not twist, so I have the effect of the edge rotating around the back of the blade. I have attempted to capture this effect in the following picture, but I'm afraid it isn't nearly as clear as it should be.

So the bottom line? This Falchion did not thrill me when I first examined it.

The above mentioned flaws and deficiencies left a bad first impression. But after a little touch up work I am quite happy with it. I would rate it as a good buy in its price range. And if you are not going to train hard with it and treat it as a fighting sword, I still rate it that way.

However, be aware that this sword is designed to be a $150-200 sword. As such it isn't designed to take much abuse without showing considerable signs of wear.

I am still not sorry I bought it. If I'd had the benefit of 20-20 hindsight prior to purchasing it, would I buy it? I probably would still buy it, but it might have been a bit lower on my list of priorities.

I would buy this sword knowing its limitations, if I primarily wanted a nice looking wall hanger that I could sharped and use for light target cutting. But I would not treat it as a true battle-ready sword which should be able to stand up to pell training and other heavy use.

The Windlass Medieval Falchion (sometimes also referred to as the German Falchion) has an online price tag typically around $185. However, for the very best deal - you can pick it up for just US$166.50 HERE at Kult of Athena which is definitely the best price online from a reputable sword merchant for this piece.