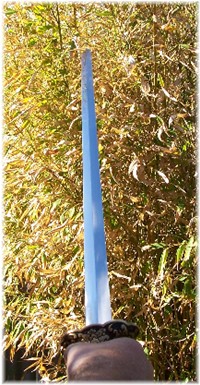 Every time I had seen a picture of it, the Cold Steel Gim Sword looked different.

Other times, it looked like the handle was totally out of proportion to the blade.

And so for a long time I dismissed it.

But the more I looked into finding the best value for money Gim sword on the market (also known as a Wu Jian  Gim being the Cantonese word for a straight double edged Chinese sword) my research kept leading me back to this particular sword...

Previous reviews had stated that on the negative side it was around 4 to 6 oz too heavy.

But otherwise the blade was described as extremely keen, nicely finished, very well balanced and essentially considered to be the most faithful to the actual original antiques in the sub US$300 price range.

Not being a Chinese Martial arts practitioner myself, and having handled only a very few actual antiques, I can only describe this sword from my own perspective as a sword collector and backyard cutter. 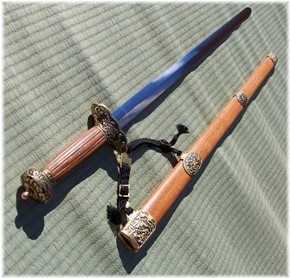 My first impressions of the Gim sword were along the lines of Wow, this looks NOTHING like the pictures I have seen of it on the internet...

And that was a very good thing...

As I mentioned in the introduction, most of the camera angles I have seen of this sword give it a distorted appearance  with a stubby, fat handle and a gaudy, almost zinc aluminium looking hilt.

But pick this sword up and look at it first hand and it is a totally different sword..

I have tried to capture how it REALLY looks in the pictures you see in this review. But even they, while close to its appearance, do not do it justice...

This is simply a very (very) attractive and classy looking sword. 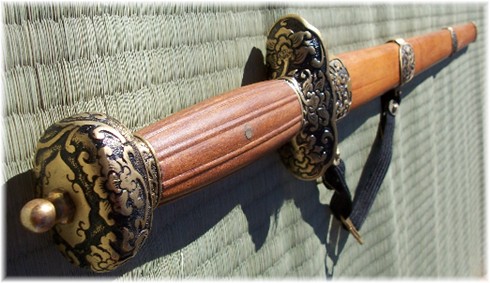 Primarily made up of cast brass fittings and high quality rosewood, the hilt is quite a work of art. Set against a blackened background, the raised floral themed design gives it a classically stylish appearance. 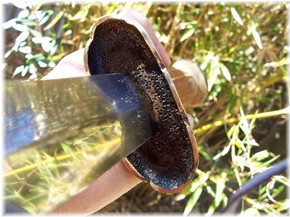 Indeed, the only area where it looks a little off is on the inside of the wing shaped hand guard, where it is hollow and blackened with a somewhat burnt out appearance. However, I do not believe that this is an isolated design  as just about every other Gim sword I have seen (many with price tags in the $1000 range) have the same appearance...

The scabbard is a continuation of the rosewood and brass floral theme and is spectacularly done, giving the sheathed sword an appearance that truly belies its relatively low price tag. Indeed, I would have to say that the scabbard itself is easily the most attractive of any in my collection.

But, unlike so many aesthetically pleasing swords in the sub US$300 price range, the beauty of this sword becomes even greater when drawn...

To say that the blade is faultless is an understatement.

The dividing line of the spine is crisp and perfectly straight. And the finish of the 1050 carbon steel is closer to a mirror polish than satin, though close examination shows some grain in the polish.

However what struck me most about this blade was how darn sharp it was!

Just touch the edge with your thumb and you literally feel the flesh begin to sink into the steel..! And to all the people I have shown it too, without fail, the initial response is always an expletive and a look of dread...!

And as you can see from the quick paper test below, whatever it touches  it cuts...

This alone is scary enough.

But combine this with the Gim Swords handling and it becomes truly terrifying...

Weighing in at 35 oz on my kitchen scales (2.18lbs) it is theoretically around 4 to 6 oz heavier than a traditional Gim sword or Jian should be  which is partly to do with Cold Steels use of somewhat thicker than usual steel to increase overall durability.

However, with a point of balance around 6 from the crossguard (most antique jian have a balance point 6.5)  the extra weight is barely noticeable. And each swing produces an EXTREMELY audible whooshing sound as the razor sharp edge slices the air with incredible speed and acceleration.

The only negative to its handling was that the vertical ridge lines on the rosewood handle was sometimes a little painful on the upper inside part of my index finger after extended usage (and extended usage is a given - as it is soo much fun to swing and hear it whistle through the air!).

But swinging it through the air was one thing. With all the elements seemingly in place, I was REALLY looking forward to seeing how it cut...

I started my tests in the usual manner  with some light targets including water filled P.E.T. bottles and plastic milk jugs (though with a little red food dye for a splash of color)!

Naturally, the blade made short work of these light targets. 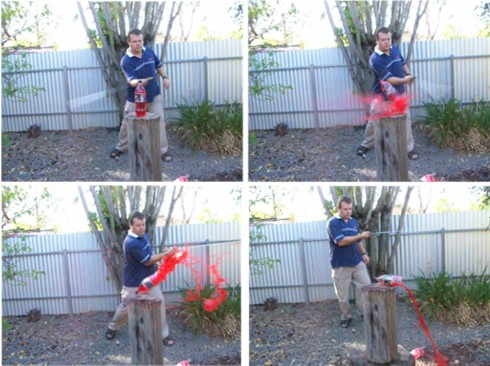 However, it really started to show off in a simple thrusting test.

Simply TOUCHING it against a milk jug was enough to pierce it. And it took only the slightest effort to thrust it right through and out the other side, as clearly demonstrated in the video below.

Considering the Gim Sword is primarily a thrusting blade, this should not have been such a surprise. But what REALLY surprised me was its cutting ability...

My first targets were a few tatami mats. And after cutting up the first one, I really wish I had made more...

Now normally, when using Tatami mats my sword of choice was naturally enough a Katana. After all, Tatami Omote was a traditional test cutting medium for a Japanese sword. However, the ease of how this one handed Gim sword sailed on through each mat was extremely impressive.

Apart from one time when my form was so bad that instead of cutting the mat I clipped the top, each cut went through like a light sabre the blade doing all the work without so much as breaking a sweat...

It was quickly becoming apparent that tatami mats and P.E.T. bottles were no real test for this blade. So it was time to really see what it was made of...

Now, being made of 1055 carbon steel with a relatively thin and light blade by Cold Steel standards, I wondered if it would maintain the reputation for durability that Cold Steel was famous for...

There was something warning me that the blade would not be able to handle a tough target without chipping or deforming in some way. But I just had to know the edge of its limits.

So my for my target to make or break the Gim sword, I selected some thick pine tree branches that needed a bit of a trim...

Now pine is a very tough wood and extremely demanding on the edge of a blade. And considering that the average branch thickness I was taking on was over 3, I had my doubts that the Gim sword would even make it through in one piece.

But I neednt have worried...

My first swing went through cleanly. The second one took down two branches in one hit. And the third went through well over 3 of densely packed wood as if it was barely even there...

I examined the blade and there was barely even a scratch, never mind no signs of any chipping or deformation - though plenty of sap! 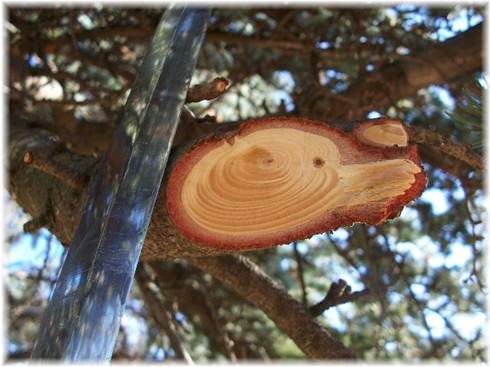 This sword was a fast and lightweight cutting monster!

Closer examination revealed that the hilt had become a little loose from the repeated impacts. And considering that it was a threaded pommel rather than peened like a traditional Gim sword, I was not totally surprised. But on the positive side, it was quite easy to unscrew and tighten up the second nut inside the pommel assembly. 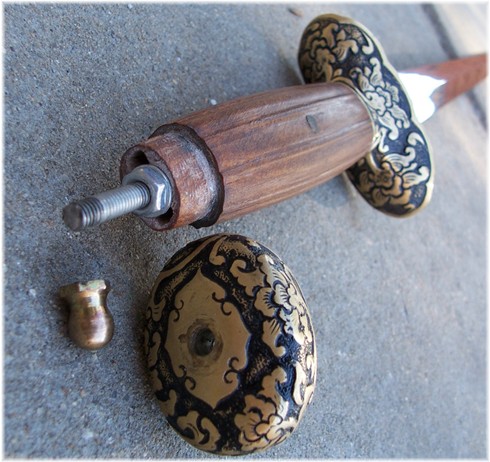 Disassembled: Easy to tighten if necessary

And after doing this field repair, the sword was as tight and as good as new. Though I imagine that heavy duty branch cutting would result in some additional tightening.

I cant speak from a Kung fu martial artists perspective other than to say that this sword is a few ounces too heavy yet nicely balanced. But from a collectors point of view  this sword is a real gem!

Cold steel have outdone themselves with this sword. Indeed, I would have to say that this is easily one of my favourite swords of all time and I cannot recommend it highly enough for anyone looking for a Chinese Jian or Gim sword that embodies the perfect balance of price, beauty and bone chilling performance. 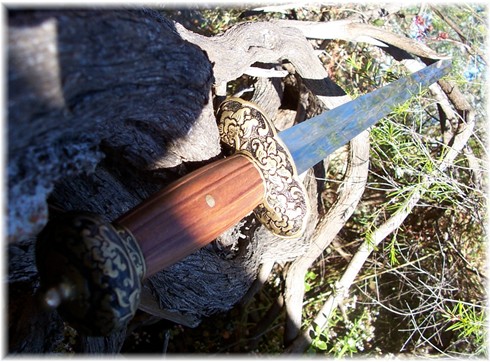 The Gim sword sells online from around US$299 to $489 depending on the retailer.

However, as for all of Cold Steels swords, the best place to buy it is here at Kult of Athena where it is available at the lowest price on the internet of just US$299.95.

I hope this information on the Cold Steel Gim Sword has been helpful. To return to Fully Functional Yet Inexpensive Chinese Swords from Cold Steels Gim Sword Reviewed, click here