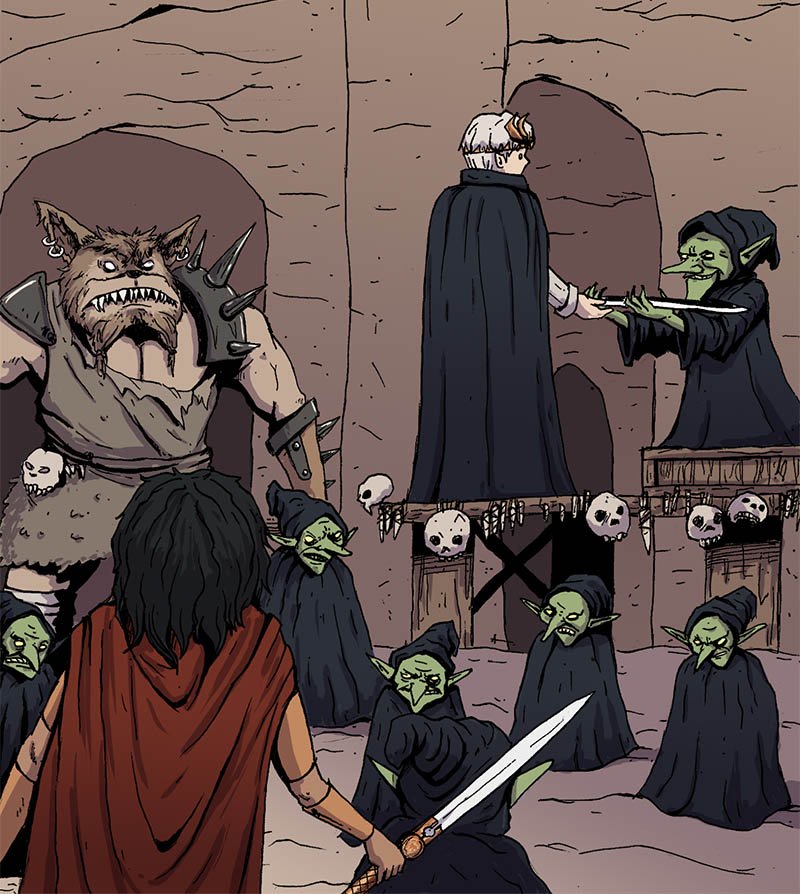 Tales of Goblin King Sword: A Report on the Northern Islands

The Northmen are fierce warriors and while much ground has been made in contesting their hold on our lands, much effort is also required to ensure our sovereign rights are respected in this area of the world.

To the point, we have recently captured a warrior – the last survivor in an ambush we set – who told us that he came from an isle off the coast of Tuath De. If you recall our previous conversation, this is quite far from the lands the Empire is contesting, and so our scouts have rarely been able to travel in this area, much less map it for future conquest. Suffice to say that this warrior was more afraid of what he had encountered previously than us. When pressed by our very convincing torturers, he kept muttering the words “Goblins” and “Goblin King.”

Surely any true kingdom would register in our universal mapping project, and hence we brushed it off as ravings from a lunatic. But there was something in his eyes and voice that seemed to express true terror, such that I had been bothered by it for the past few days and had little sleep.

By reason of this, and mindful of any additional expense, I sent off two of my ablest scouts to track where this warrior had come from and discern the veracity of his ramblings. It has been more than a week, and I have not heard from them again. As it stands, I cannot lose these two men for they know the lay of the land and have been quite instrumental in our current campaign against the North. By midday tomorrow, I plan to set out on an expedition to recover them, ideally alive.

The remainder of my command will continue towards our rendezvous near Grimmerheimer Castle. They are led by my most capable lieutenant. I will update you once I have confirmed the status of my men. If there is indeed such a thing as a Goblin King, I will ensure that he bends the knee before the Imperial Court. That, or I shall return with a few thousand Goblin heads.

The Goblin King Sword was one of the bonus winning entries from round one of the Fantasy Sword Design Contest we held in the summer of 2017.

Designed by SBG member Croccifixio in the Philippines, his design was brought to life by Chris Palmer at Scorpion Swords in the USA - and in this hands on review by the designer himself, we get a no hold barred evaluation to see how close it came to his original concept.

So without any further ado, here is his hands on review of this piece of fully functional sword art, the Goblin King Sword.

Review by the Designer, Croccifixio, Manila, The Philippines

Thanks to our ever-generous admin, Paul Southren, Sword Buyers Guide forum members were able to enter a new fantasy sword design contest. I submitted dozens of designs, and as luck would have it my Vorpal Sword design was chosen as part of the first batch of swords to be made by Blade Culture International here in my native Philippines! I was happy – quite an understatement actually – and content with my gains. But later on, Paul announced that another design of mine (originally “Jaws,” now “Goblin King Sword”) was also chosen to be part of another batch of swords produced this time by Chris of Scorpion Swords.

I’ve always been a big fan of Chris and his designs so I was doubly happy – again, an understatement. I was floored, stoked, absolutely excited, and deeply honoured because not only was I to receive the prototype, but these would go into production and other people could buy swords that I designed!

Little did I know that the second batch of swords would be churned out first, and that I would get the Goblin King Sword within the month of September... I tell you, Chris is so fast at turnaround time, he deserves your business. If there’s a sword you want made that fits the aesthetics you’ve seen of Scorpion Swords, pull the trigger.

With that out of the way, let’s go right into the review:

The final sword design deviated a bit from the original, turning this into a one handed weapon with enough grip to use two hands in a pinch. The sword itself is made just as I designed, and this loyalty to the design is quite important for me for a number of reasons.

Firstly, as I alluded to in my entry, the entire sword is based upon the aesthetic appeal of a shark. I’ve been a big fan of sharks since I was 4 years old.

Hence, each aspect was meant to show the streamlined, dangerous shape of my favorite apex predator. The black/white division was basically the white underside and dark top of a Great White. The dorsal fin became a bit of a fishhook style lug at the back. The consistent curve of the belly led to the mouth/tip, which was to be the most dangerous part of the sword. The gill lines were there for mostly aesthetics, and the integral guard were the fins. The tail was both a shark’s tail and a glass-breaker/head bashing pommel. Of course, I wanted it all to be integral for strength and consistency.

Finally, the grips were there and designed mostly with comfort and aesthetics in mind. Nothing quite like a nice sandwich grip with 3 pins.

Secondly, I wanted this sword to be a badass SHTF/zombie apocalypse weapon that had some elements taken from original swords. The blade style itself actually exists in certain parts of the Philippines and was used both for agriculture (cutting down tall grass, cane, etc.) and fighting. The profile getting wider at the tip is akin to many antique and modern Panay/Aklan Tenegre (I have one antique sample), Moro Pira (mostly the curve of the belly and the extended clip point), and lends itself extremely well to devastating chops. The theory is you could just chop a coconut in half perpendicular to its fibers with just one swing of the blade.

The handle is also a reverse Moro Kampilan design. I was thinking of making it the usual Kampilan pommel which rides up into your arms but since I wanted it to have a sharp point, it would probably be too dangerous, so I just reversed it.

Finally, I imagined the sword to be used by “bad guys.” Not necessarily evil, but dark anti-hero individuals or savage peoples who were all about fighting and edges and not really concerned with aesthetics. The simplicity of the build alludes to that (no separate guard, pommel, complex hilts, layered hilts, threading, peening, etc.)

I just wanted a pure weapon, and I got it.

So where does this leave us?

As it arrived this morning 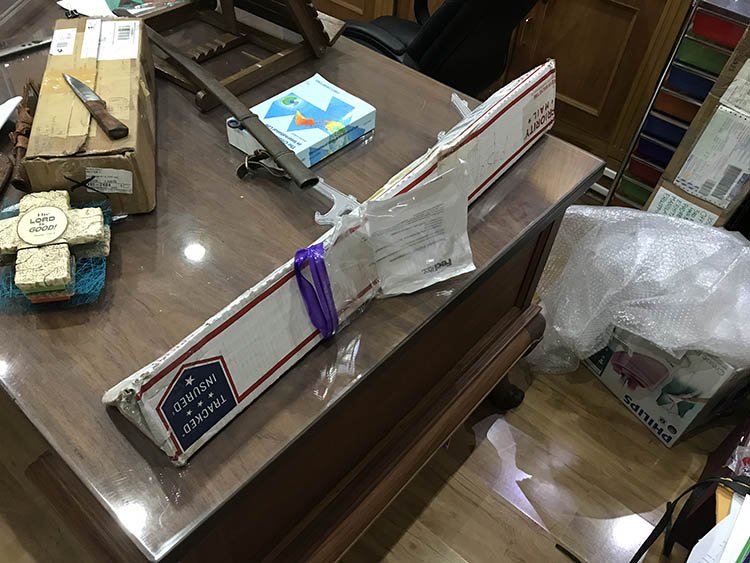 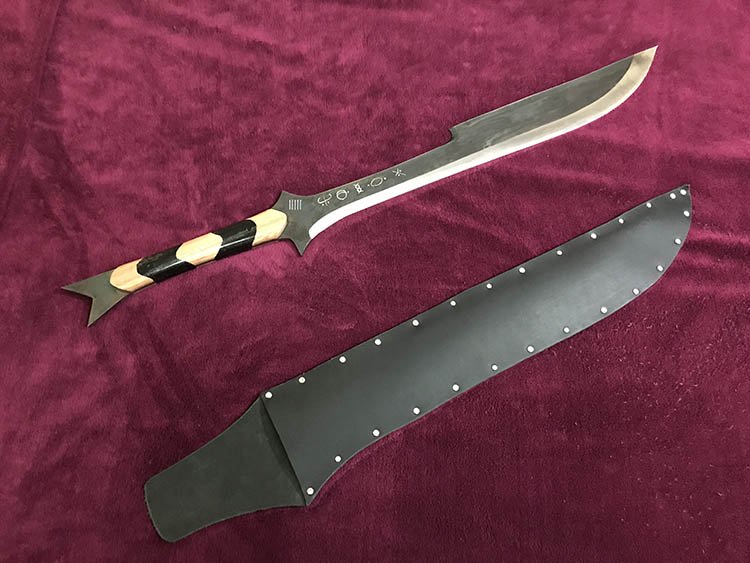 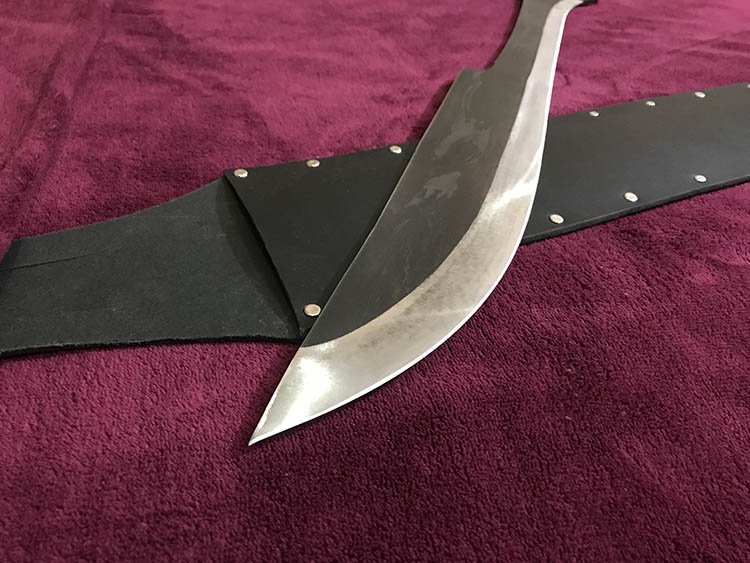 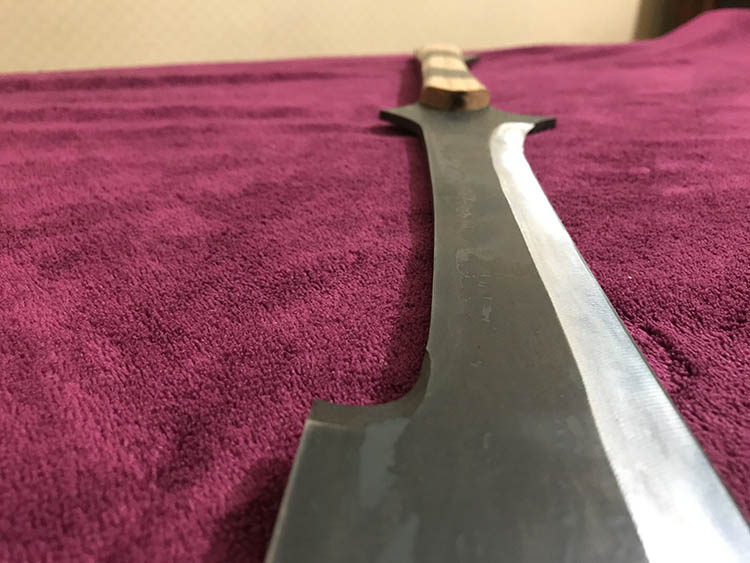 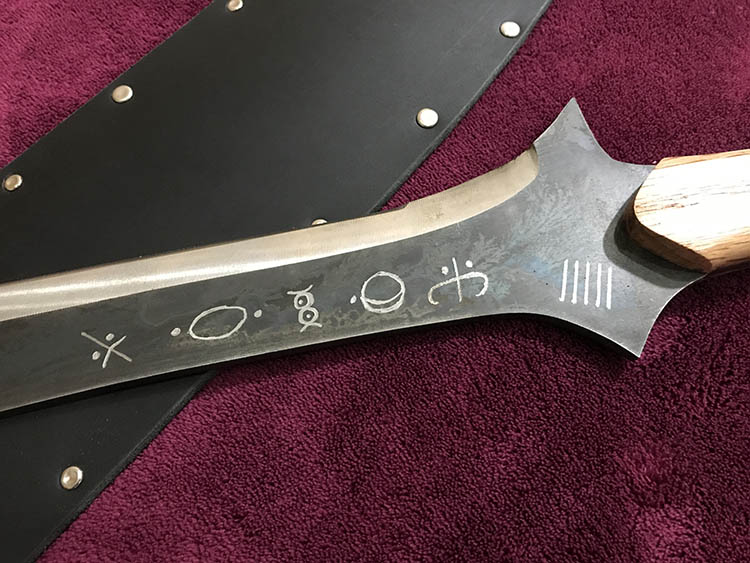 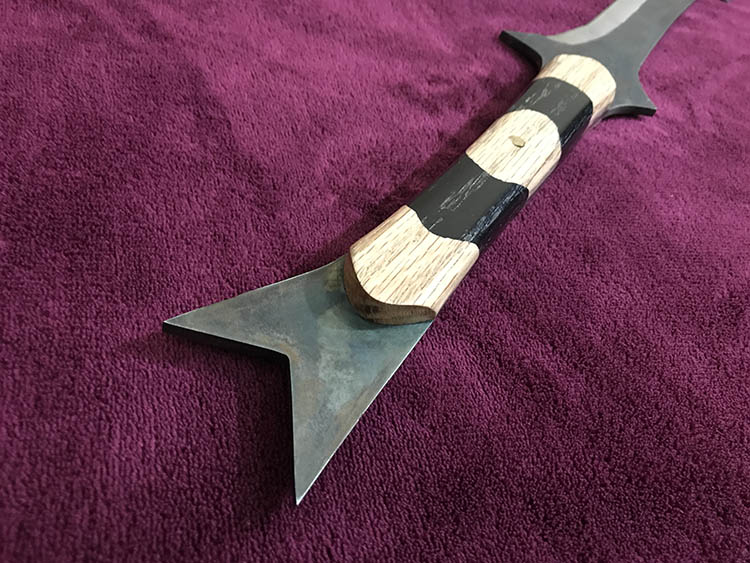 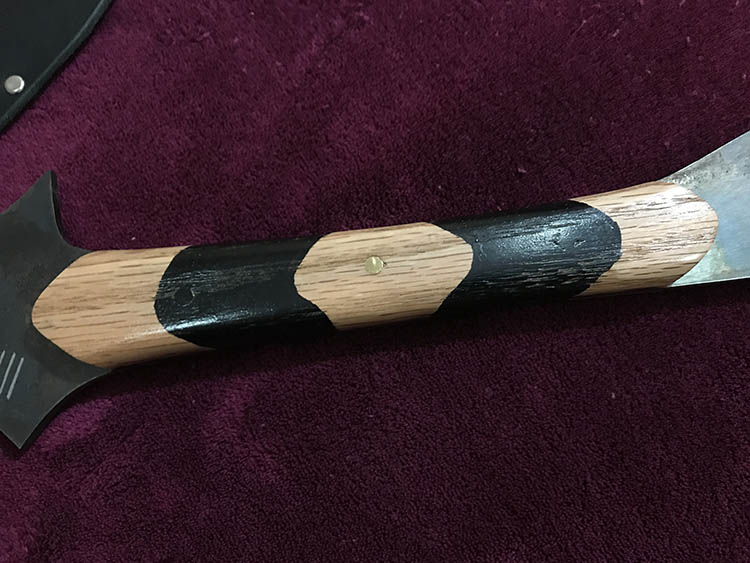 In the hands of Chris: 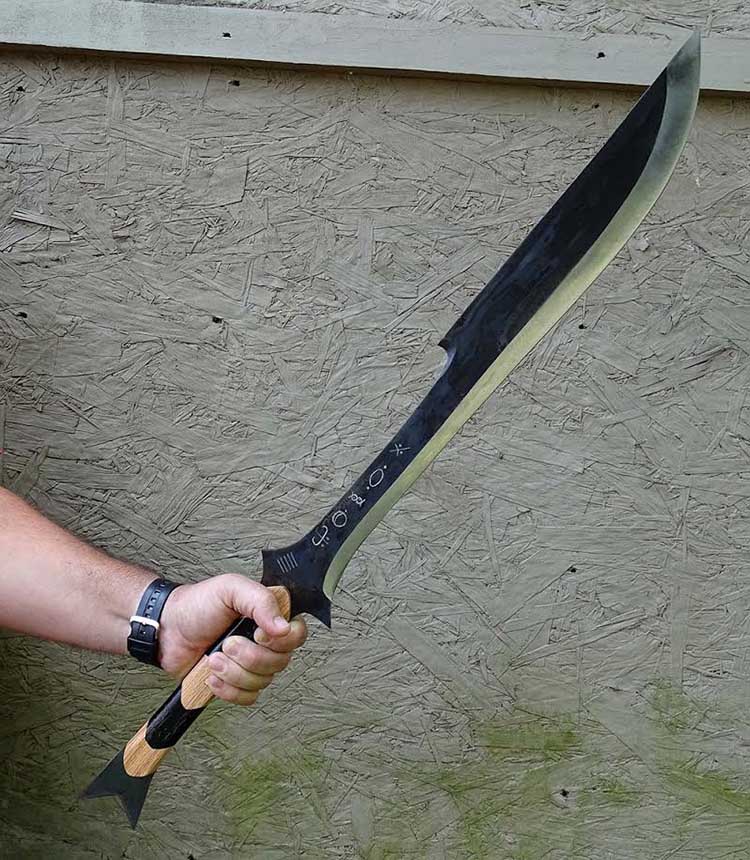 Of course there is inherent bias in what I’ve written, but this is honestly such a badass sword that I don’t really think it affected what I wrote. If you want a sword that just screams “kill” (water bottles and tatami mats, of course), this is the sword for you. If you want something a Goblin King would carry to war, heck this is DEFINITELY the sword for you. Get one and judge for yourself. I'm just really happy - quite an understatement.

If you are aware of Scorpion Swords, you will know that Chris makes TOUGH blades. And not just a little bit tough, we are talking hard core - almost indestructible tough..

But will this toughness extend to an eclectic Fantasy sword design like this one?

We had our resident independent sword tester, Jason Woodard, put this sword through its paces - up to and including testing on solid granite blocks that he has broken many swords on..

But not this one.. It really does have to be seen to be believed..

The Goblin King Sword is exclusively available here at the SBG Sword Store for $274.99 for the sword and an additional $39 if you want the leather sheathe. In the same section you find this sword you can also find several several other SBG exclusive designs from this and other projects with Chris Palmer from Scorpion Swords.