The Green Destiny Sword (also known as the Crouching Tiger Hidden Dragon Sword) by the Noble Collection was discontinued years ago, but the imitation replicas live on..

People that want it are usually die hard fans of the original movie, and will apparently pay rather large amounts of money to get it.. Heck, even the original price of the official replica Green destiny sword had a price tag of $295 - and it was just a typical stainless steel replica.

Indeed, for all intents and purposes,it was a classic $30-40 sword selling for many times the price just because it was a 'collectible' and 'authentic' - and sold at such a mark up by vendors who hoped that that most suckers out there won't know what a sword is worth (which unfortunately most of the time, is true).

Below is a picture of the official replica, the one that everyone wants apparently.. 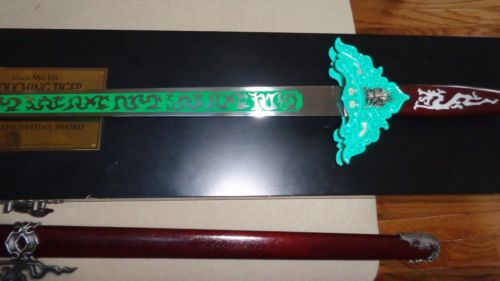 Need sunglasses just to look at it..

The imitations of this sword look like a pretty sub standard Chinese Jian (often, not even very 'green'), and are still being sold with a price tag from around US$79.99 to US$159. These are $25 dollar swords made by generic Chinese sword forges for pennies on the dollar. However, if the Noble Collection replica is indeed exactly like the films original - the copies are really quite abstract and are pretty poor imitations. In fact, the majority of these replicas don't even have the right colored hand-guards or tassels!

These days those few originals that were kept in original condition are quite saleable - selling for up to double the original $295 price on eBay. Non entirely sure if that makes them a good investment per se unless you bought a truckload of them that is.. But better than being worth less than you paid for it, which is often the case..

Overall, while I enjoyed the movie, I can't recommend the replicas of the Green Destiny Sword. Interest in it is a good lead in to Chinese swords in general though, so as it's no longer available anyway - and the knock-offs are not worth spending your hard earned money on, your best bet is to probably check out our page on Chinese swords...