Irish swords like the one reviewed here made by Legacy Arms (formerly Generation 2) may look like a fantasy piece, but this design did indeed have a historical precedent. Wielded originally by the Galloglaigh - mercenaries of the Scottish highlands (of mixed Irish, Scottish and Norse decent) who fought for the Irish from the 13th Century to the 16th Century, the design of these blades was absorbed by the Irish (as eventually were many of the original mercenaries and their descendants).

This particular blade is the favorite design by the owner of Legacy Arms, Clyde Hollis (himself of proud Irish decent) and its weight, balance and specifications make it much closer to the historical originals than anything else in this price range (though still with the kind of variations you tend to expect at this price point)...

So let's take a close look at it with one of our resident reviewers, Dan Dacombe.

Legacy Arms Irish Hand and a Half Sword 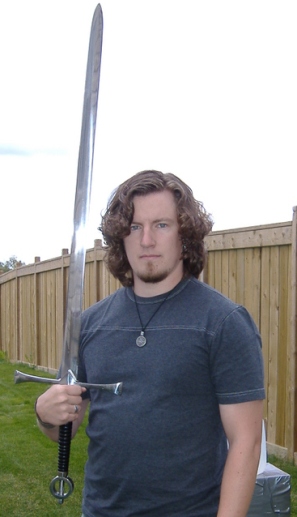 I placed my order for this sword in January of 2007. I had done a small amount of research into Legacy Arms, and decided to give their Irish swords a try. I was originally attracted to the slender, graceful blade and the ring-shaped pommel.

When I learned more about the original design of these Irish swords - apparently based off of an Irish Mercenary group's weapons - I was sold on it.

Having some Irish in my background I knew that it was only a matter of time before I needed to hold this sword for myself. I placed the order and started pacing.

The sword arrived after a 2-month wait, as it had been back-ordered. Then as now, it remains a sought-after piece in Gen2's collection, and is back-ordered on several sites.

Once the sword arrived, I cleaned off the packing goop and gave it a few practice swings.

I was astounded at the Irish swords responsiveness. The Irish Bastard Sword weighed in at a mere 2.5 pounds, and handled like a dream. It was balanced enough that you could practically have fenced with it, but felt powerful in the two-handed strokes that I gave with it. I didn't think it was possible for a sword of this size to feel this comfortable in my hands - at the risk of sounding cliche, it felt like an extension of my own body.

I wasn't sure how sharp it was, but I was ready to find out. Before I go any farther, here are some stats:

The blade seemed very thin to me when I compared it to other swords I owned. That being said, it still was very strong. I flexed tested it as far as I could without putting it over my knee - about 6"-8" from true. This made me very nervous, but the blade resisted a set in both directions. It was distal tapered with no fuller. Close examination of the finish revealed numerous uneven wire-brushing marks down the length of the blade, which while aesthetically unpleasing affects not the integrity of the blade.

The blade appeared to be unsharpened close to the hilt, but was getting sharper the closer to the point of percussion. More on that later. 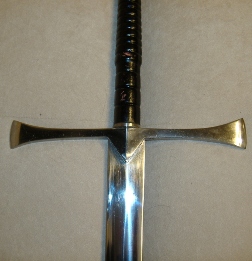 The Irish swords hilt was wide and solid, and reminded me of Aragorn's sword from the Lord of the Rings movies.

While some have said that this exceptionally wide hilt (10") gets in the way during a swing, I have not found this to be the case.

As with all Gen2 products, there is a small G2 logo on the hilt. 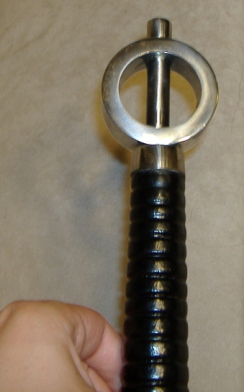 I was nervous after reading Bill Tsafa's tire-pell test that I had purchased a sword with a threaded pommel, so I contacted Clyde Hollis from Generation 2, a stranger to me at the time, about it.

After a few days he came back to me. He had tracked down my order and confirmed that this was not the case, and I had gotten a newer one with a peened pommel.

This was a relief, and is the kind of solid customer service that I have come to expect of Gen2 and Clyde in particular from this and other cases.

The ring pommel remains one of my favorite features about these Irish swords, and is always what people point out first when I am showing off my collection. 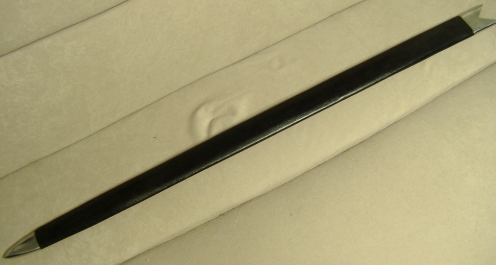 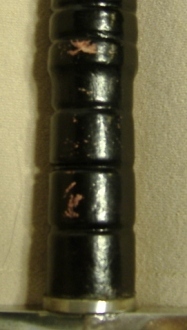 The Irish swords leather-wrapped handle has a space for the main hand and a slightly thicker section for the off hand to grasp.

This leads to a very solid feel as it is gripped, even one-handed.

"The leatherwork is very well done, but had a few sections where it had flaked away, leaving some pinkish residue beneath (pictured right)..."

Since this problem would go away with the application of any leather polish (and is to be expected with wear and tear) it only causes a loss of half a fit and finish point. 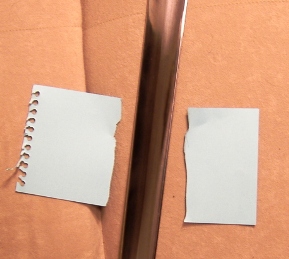 I had intended to take a picture of the piece of paper as the Irish Bastard Sword sliced it about halfway through, assuming that it could.

I was unprepared, however, for how neatly it went straight through the page.

There was a slight tear as I tried to put the brakes on (and save the picture I wanted), but the cut was otherwise clean and neat. This sucker was sharp!

As I mentioned before, the Irish swords handling was incredible. Before I actually cut anything with it I took it into my backyard and swung it around a bit. It did feel slightly 'whippy' when shaken but not when swung, and I was not sure how it would hold up against heavy targets simply because of how thin the blade is, however well-tempered it seems to be.

Nothing would make me happier than seeing this slice a tameshigiri mat in half. As I do not have the best form (as you will see in the videos) I was reluctant to cut anything more solid than a milk jug. Let's more on to the tests.

I set up my backyard stand, put the jug down, and took a swing.

As you can see, the bottom section of the jug did not move at all. The top section was neatly sliced away, neater than any cut I had done before. I couldn't believe how sharp the Irish Bastard Sword came. I decided to make my next cut low, to see how it fared with most of the target's weight above it.

A low cut goes through clean..

As evidenced by this video, this sword cuts like there is no tomorrow. If I hadn't had a slight uprise on my swing, I doubt the top would have fallen off - it stays in place for almost a second before sliding off. And the bottom remains fairly stationary on the stand. An excellent cut.

I checked the sword against the sky and confirmed - no set was taken. After a polish it was as good as new.

Solidly built, handles great, and backed by Gen2's reputation and guarantees, this sword is a great addition to any collection. If you are interested in Irish swords and weaponry, medieval weaponry in general, or rounding out your collection with a nice looking piece, this should be considered.

Since the best recommendation is a personal one, let me say this: This is my favorite sword.

I liked it before I put it through the cutting tests, and I like it even more now.

Several swords later, nothing has dislodged it from it's place; it is still the centerpiece of my collection, and will likely remain there for a while.

Recommended for light to medium cutting.

It is not easy to get a hold of this sword these days, but when a new run has been made you can find it here at Kult of Athena for just $20 more than the same price it was back in 2007 - just $299.99, making it quite exceptional value for money!

I hope this review of these Gen2 Irish swords has been helpful. To return to Affordable Replicas of Medieval Swords, from Irish swords of Gen2, click here