Japanese Ninja Swords are one of the most-searched swords in the history of the internet. And not just in your average Google search – scratch the surface of your average member of the world’s most distinguished sword forum and under the surface you’ll find someone who once thought ninjas were pretty darn cool. And it’s not just sword collectors… thanks to film, television, and anime ninjas have infiltrated modern pop-culture thoroughly. Say the word “ninja” to almost anyone on the street and they will immediately picture a black-clad warrior with a mask, creeping softly in the night to spy on, track, or assassinate (or all three) their target. 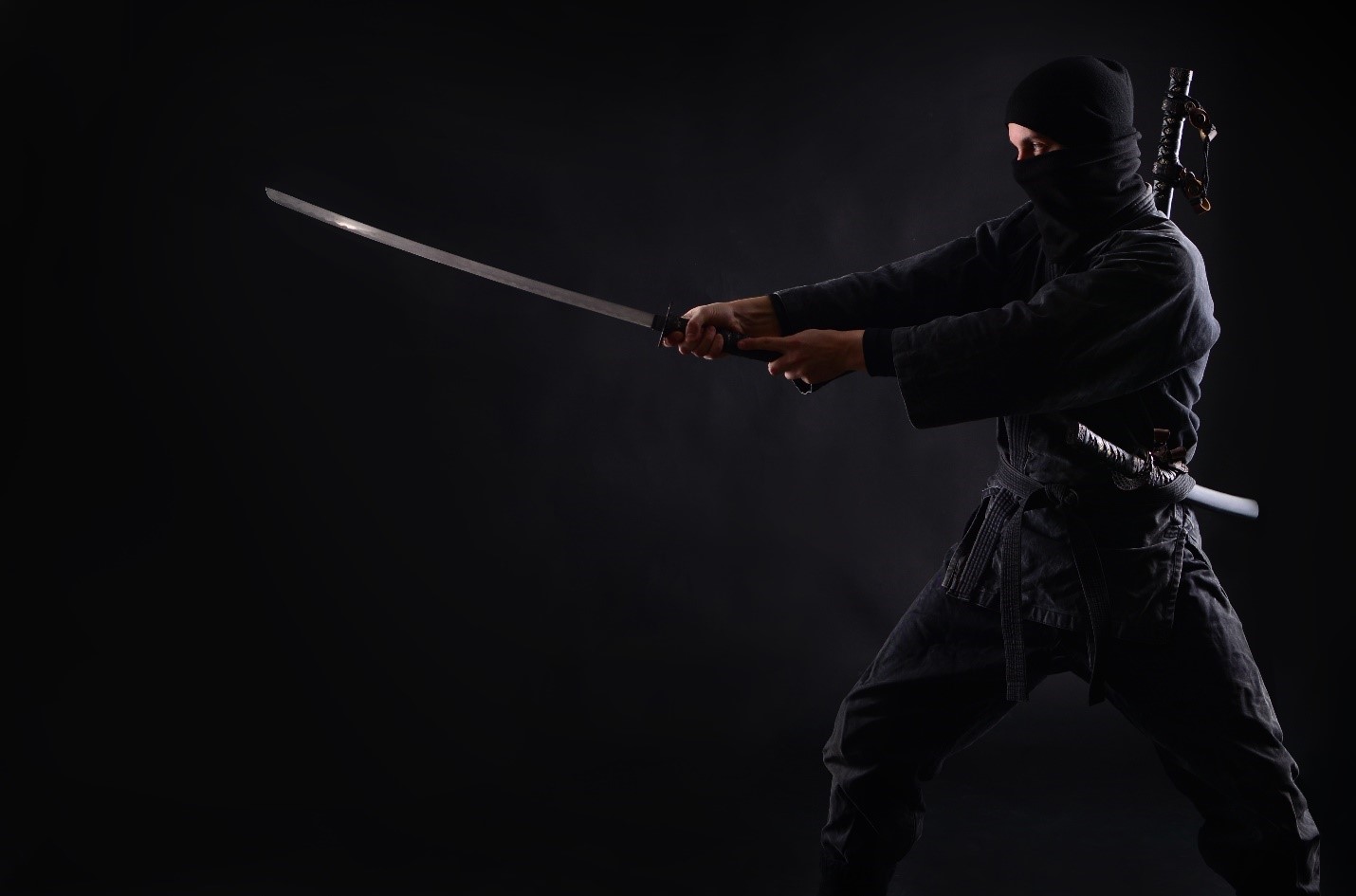 The ninja. So secretive, everyone knows about them.

But who were these mysterious warriors, if they even existed? How historically accurate (or historically plausible) were their weapons and methods? And are these “ninja swords” available on the internet accurate representations of real weapons, or are they just as much smoke and mirrors as the ninja themselves?

According to some historians, Ninja – or the Shinobi, a word that means (roughly) “concealed one” – have existed since at least the 15th century. Unlike the samurai or other Japanese warriors, the Shinobi operated in secret – as spies, as scouts, as assassins, even as mercenaries. Concealing their identities, Shinobi were useful in sneaking behind enemy lines to gain intelligence and cause as much disruption as possible. This would certainly be useful in Japan’s centuries long internal conflict which saw power change hands multiple times. With the “fog of war” being such a critical factor in premodern times, a freelance Shinobi could mean the difference between victory and defeat. There are even legends of Ninja with incredible powers, able to bend shadows, walk on walls, and use magical abilities to defeat their foes – legends that inspired books, movies, and televisions series full of Ninja with similar abilities.

So, were they real? 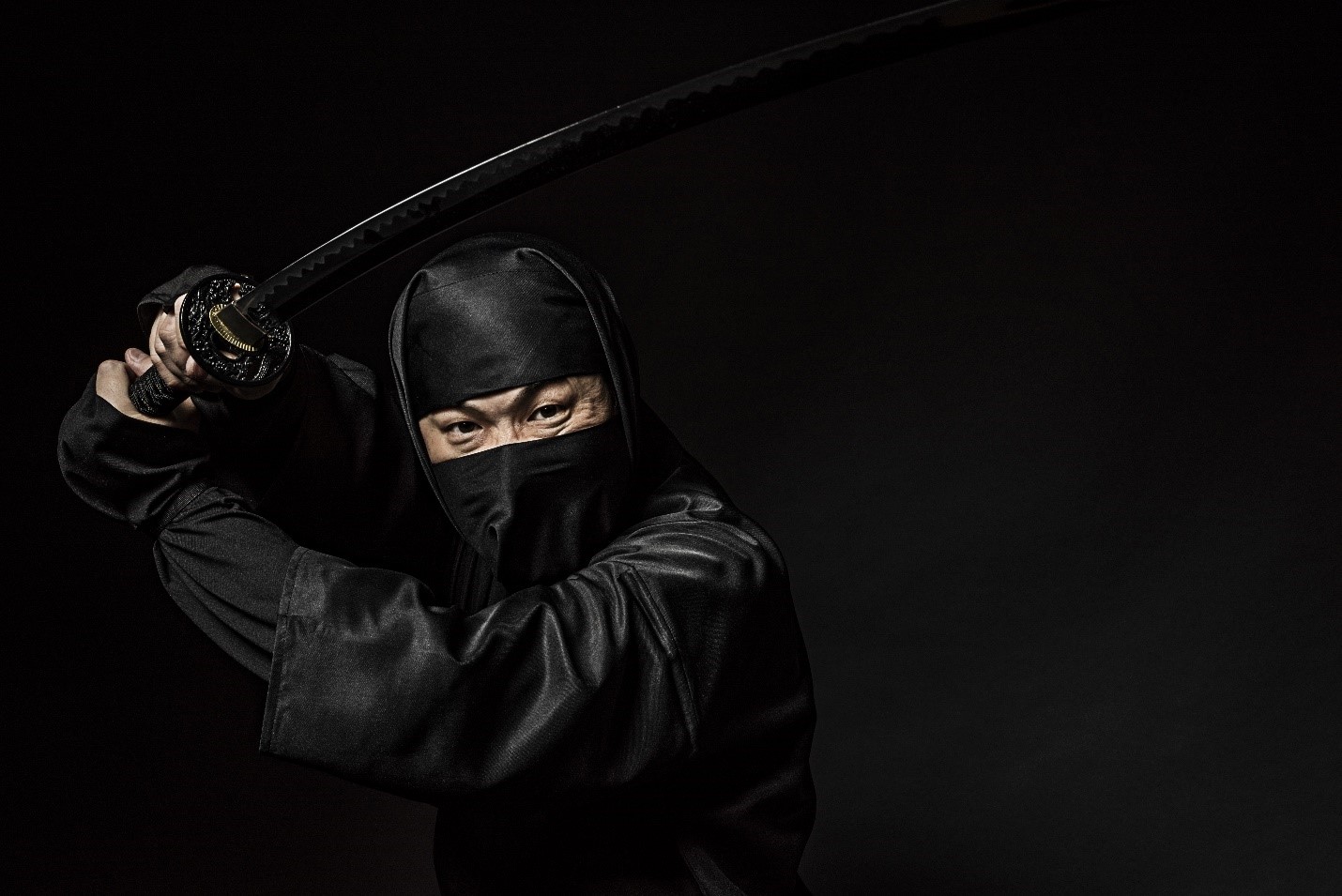 NINJA AND THE CIA

Want an 'insiders' perspective on the Ninja? Who better to cut through the noise than the CIA?! Check out their official guide to the 'Stealers In' on the CIA website here

Thankfully, some mystery remains in the world. While Shinobi were almost certainly real and operated as scouts and assassins, the historical evidence is both mixed and hotly debated. Myth and legend so overshadowed even ancient Japanese pop culture as to almost completely obscure the full story. The black-clad assailant slinking through the dark is almost certainly a work of fiction, or at least a small part of the Ninja’s true role. A ninja was more likely to dress as a farmer or merchant while they worked their way behind enemy lines, much easier to blend in than black clothing.

Ninja faded into obscurity as the modern age approached, but their legends live on – and their weapons are a source of interest and obsession for many. At Sword Buyer’s Guide, we’ve been just as interested in Japanese Ninja Swords as many of our readers – so we decided to sit down and separate truth from fiction, and unpack some of the issues that surround the Ninja’s most recognizable weapon.

Put all Japanese bladed weapons in a lineup, and even someone with a cursory knowledge of what Ninja are all about will identify the ninjatō as the weapon of the Ninja. The short, single-edged, straight blade, the square tsuba (guard), the all-black appearance – all are associated with the ninjatō. Ostensibly the traditional weapon of the Shinobi, the ninjatō is claimed by some to be an ancient design. 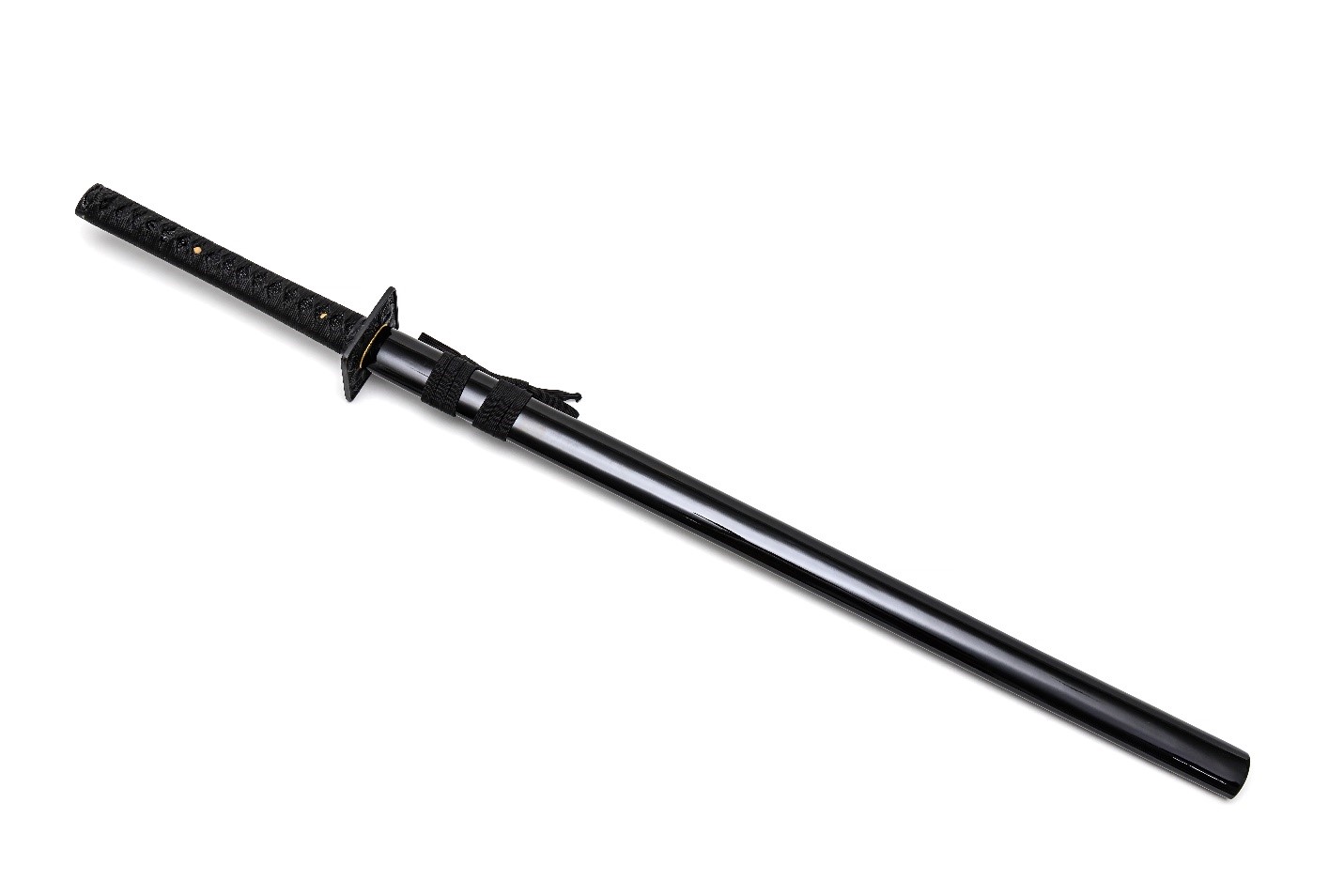 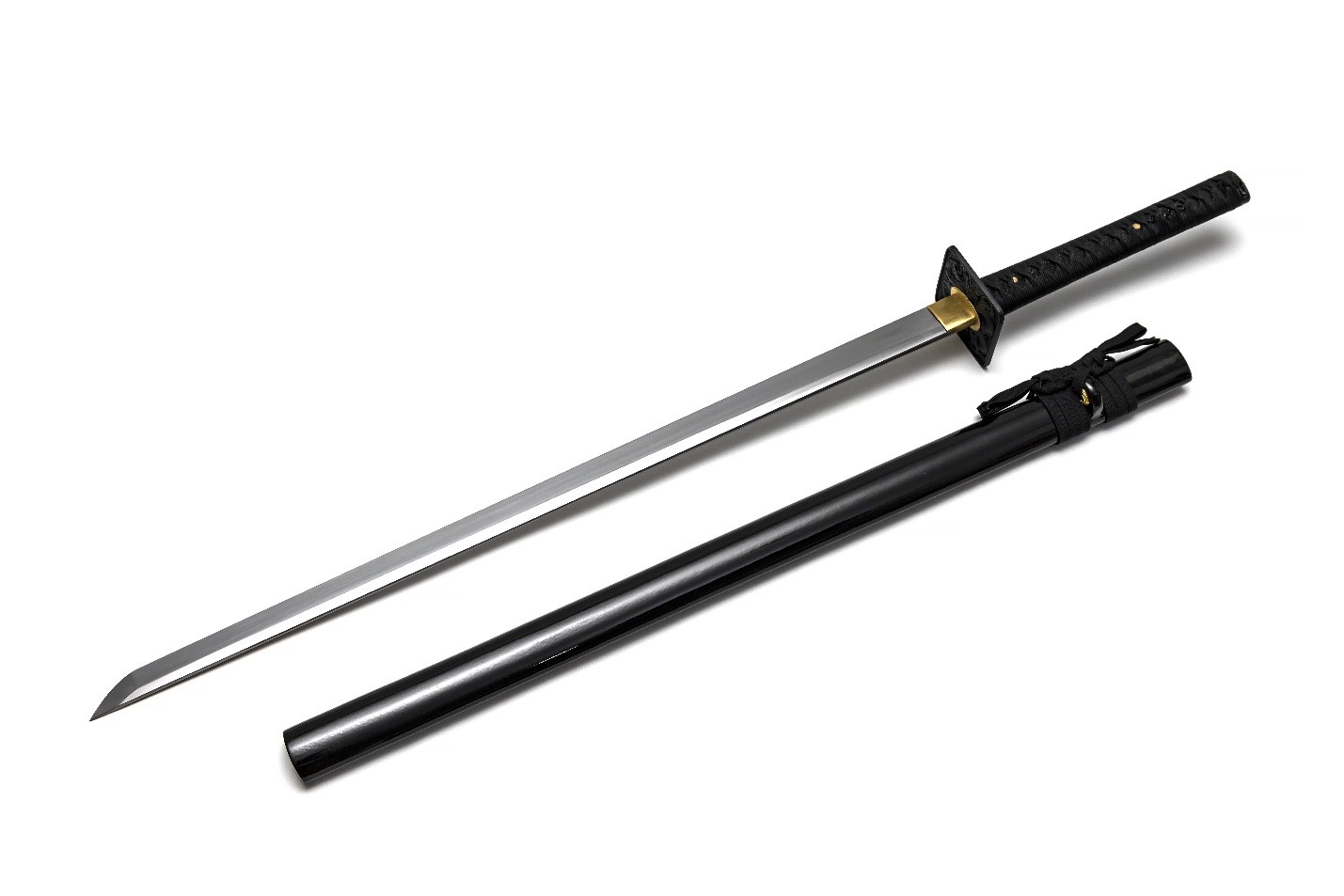 Unfortunately, the general consensus from those who have delved deeper into this style of sword is that this "ninjatō" is approximately as historical as the magical powers depicted in Ninja-related Japanese anime.

There are no solid references, photos, or physical examples of ninjatō prior to the 20th century. The ninjatō appeared in Japanese films in the 1960’s, and as Japanese films became popular in the west the ninjatō, distinct from the katana, began to be associated with Ninja and their secretive ways.

However, it isn't all that cut and dried..

While it is true that there are no extant Japanese Ninja Swords with the straight blade, square tsuba and various odd bits and pieces attached to it - there IS some evidence that they MAY have used this type of sword - though it is far from conclusive..

The first piece of evidence is the sword designated as a replica of an authentic Ninja sword in the Iga Ninja Museum, modern day Mie prefecture. 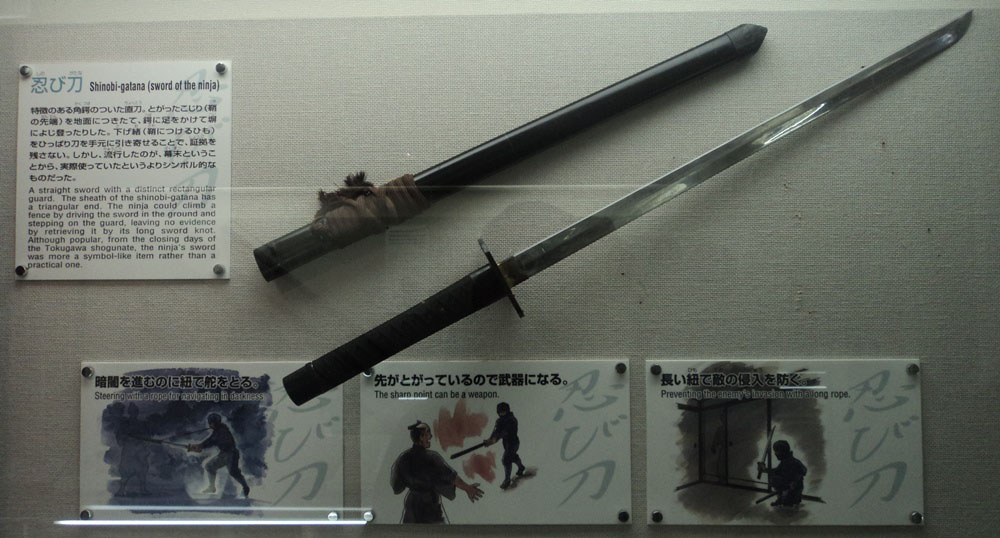 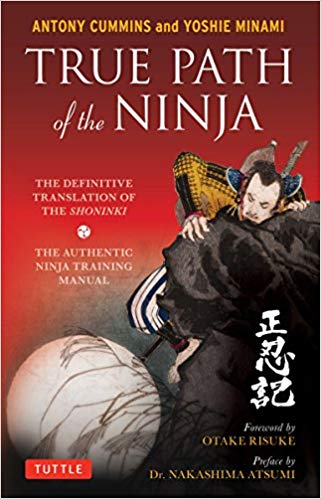 More evidence can be found in the 17th century Ninja training manual, the Shoniki - translated in English as the True Path of the Ninja by Antony Cummins and Yoshie Minami.

Originally written by the Samurai (yes, it WAS possible to be both a Samurai and a Ninja at the same time!) Natori Sanjuro, it details every aspect of Ninjitsu, from what disguises are best (monks and wild mountain priests were the most common, though merchants and entertainers a popular second choice), how to inflitrate a fortification, change your appearance, get into someones head, operate in 2 or 3 man teams, and pretty much everything you would expect a spy/assassin to be able to do).

But of interest to our topic at hand, it has several passages where it describes what is clearly the iconic type of Japanese Ninja Swords most historians dismiss as Hollywood fantasy..

Firstly, there is a direct reference to using the sword to boost oneself up when climbing, leaning it on a wall and stepping on the tsuba before retrieving it with its extra long sageo..

However, there are other references that suggest that the Ninja should carry an O-Wakizashi, or what we would typically call a Ko-Katana, and that it was critically important that any Ninja tools or equipment should not look strange or stand out in any way.

This makes sense, as any class of person who could afford one could legally carry a Wakizashi length blade without arousing suspicion, while only the Samurai were permitted to carry the Katana. And so, this iconic book would suggest that the Ninjato was actually probably closer to something like the replica Shinobigatana made by Ryujin Sword pictured below. 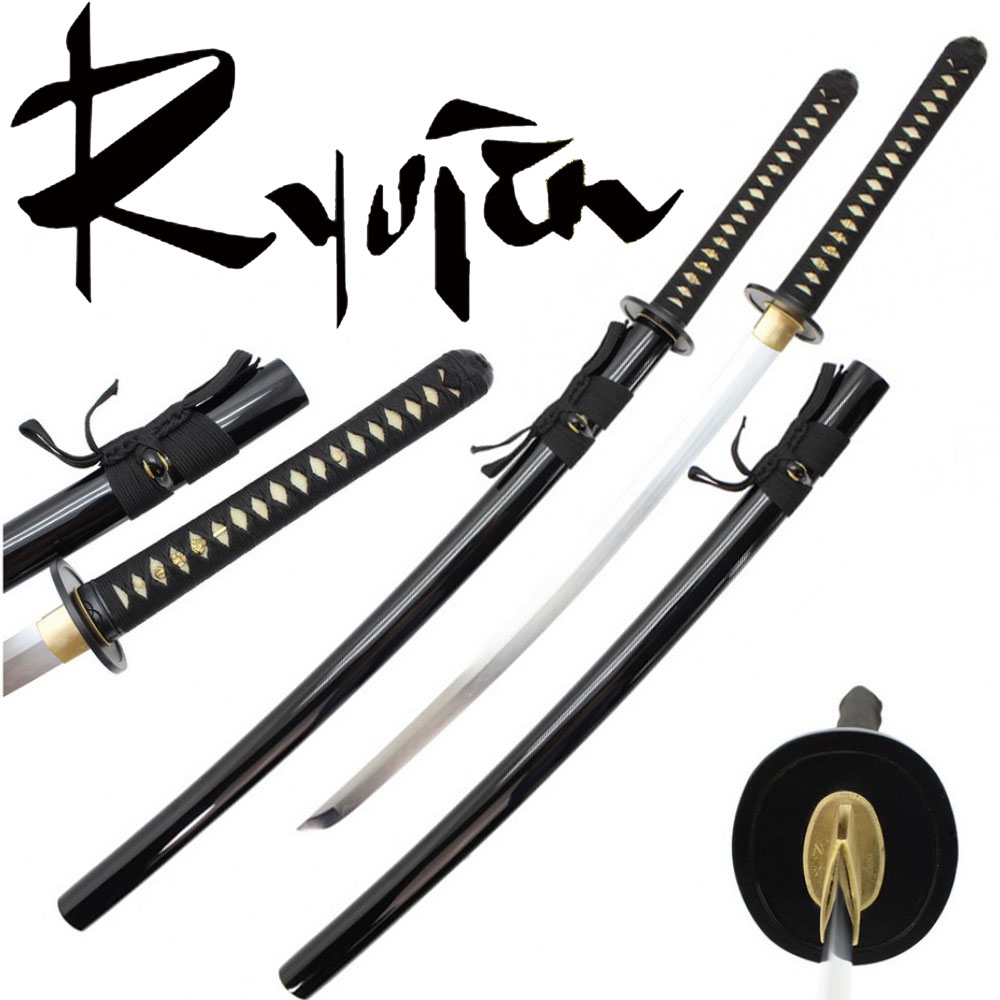 Whether by accident or design, the $129 Shinobigatana by Ryujin may actually be quite close to what real Japanese Ninja swords looked like..

This sentiment is echoed by a popular YouTube upload entitled "Origins of the Ninja Sword" and while the presented does jump to a bit of a conclusion about switching handles (normally you would want the tang to go the FULL length of the handle) - the rest of it is quite plausible.

There is indeed much evidence to suggest that an O-Wakizashi, or variants of it, were used by the historical Ninja and while it suggests that there were some modifications to the design, there is nothing so far that indicates the classic straight bladed iconic design that most people think of when they imagine what Japanese Ninja swords look like.. 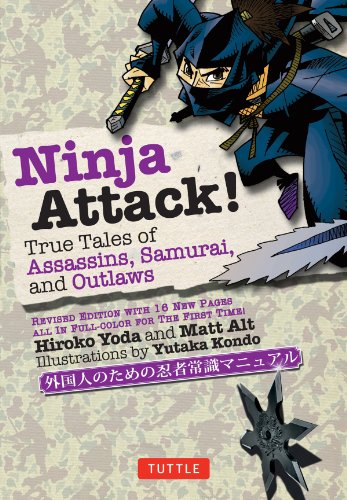 However, respected expert on all things Japanese and prolific pop-culture authors Hiroko Yoda and Matt Alt in their book Ninja Attack: True Tales of Assassins, Samurai and Outlaws dive deep into the world of Japanese Ninja swords - suggesting that they were made in the countryside by countryside blacksmiths lacking the skills and techniques to craft the Katana.

But their research led them to conclude the following:

"In contrast to the often ornately worked blades carried by the aristocratic Samurai, shinobigatana are generally known to have been pragmatic, utilitarian affairs. They had straight and fairly short blades, simple square guards, and were housed in a distinctive sheathe with a pointed tip and sage-himo cord wrapped around its circumference.."

They go on to confirm the use of the sword as a climbing tool - though they do not uncover WHERE they obtained this description..

My thoughts? Chances are that some countryside Ninja who were operating without a specific disguise and on an active mission may well have armed themselves with a specialized short bladed sword to suit their specific needs. 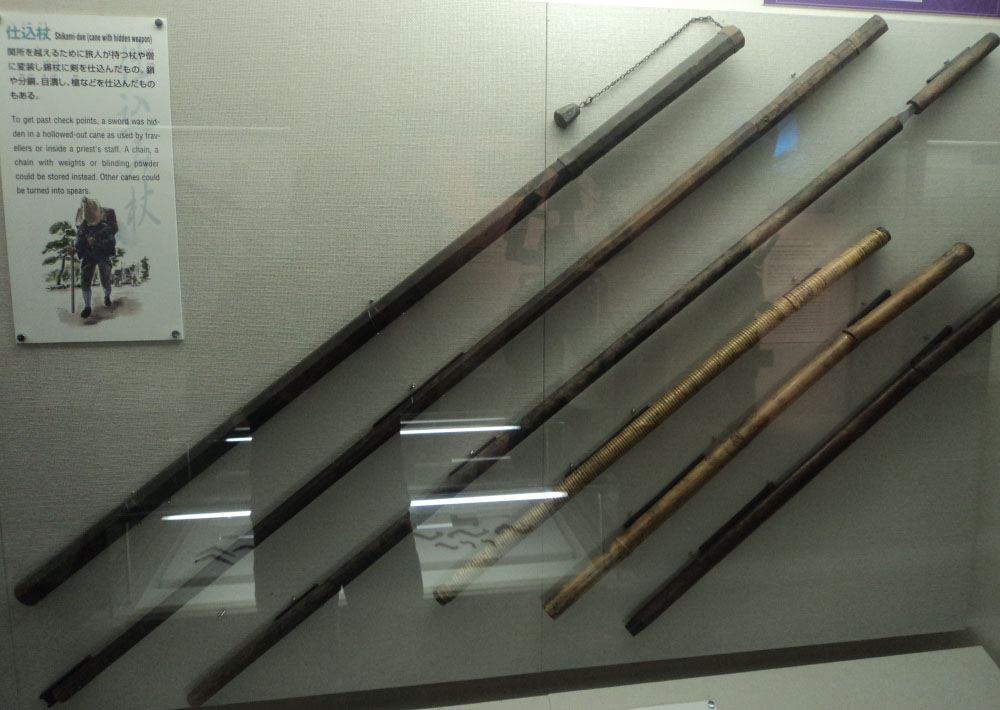 And if they were on a night mission decked out in black, they would have carried whatever they needed - and a sword that had many other functions beside just cutting stuff mounted out of their way on the back (and short enough to actually be able to draw from the back) is not too much of a stretch of the imagination..

Chances are, they probably used all these swords are MORE..

But regardless, the basic design of the straight bladed, chisel tip sword is very utilitarian - being extremely fast, lightweight and packing a serious punch as shown in this testing of the Hanwei Ninjato reviewed elsewhere on the site..

As a result, ninjatō reproductions have become incredibly popular for collectors both amateur and expert. Finding decent quality ones can be a challenge. Fortunately, we have already done some legwork and have a selection of ninjatō available on our website. Hanwei makes some incredible reproductions, including the Kouga and the Iga model:

The ninjatō  is a modern creation, and as famous as it is it still can’t quite measure up to the history and the mystique of the curved Japanese katana. But if you’ve been a student of Japanese martial history for as long as we have, you may have come across something that looks an awful lot like a hybrid between a katana and a ninjatō… and it even predates the katana itself!

Predating even the katana, the Chokuto was the result of Chinese design and methodology melding with Japanese culture. As early as the 3rd century there were indications that Chinese techniques had migrated to Japan, resulting in an early precursor to the Japanese katana (and a spiritual predecessor of the Japanese Ninja Sword). 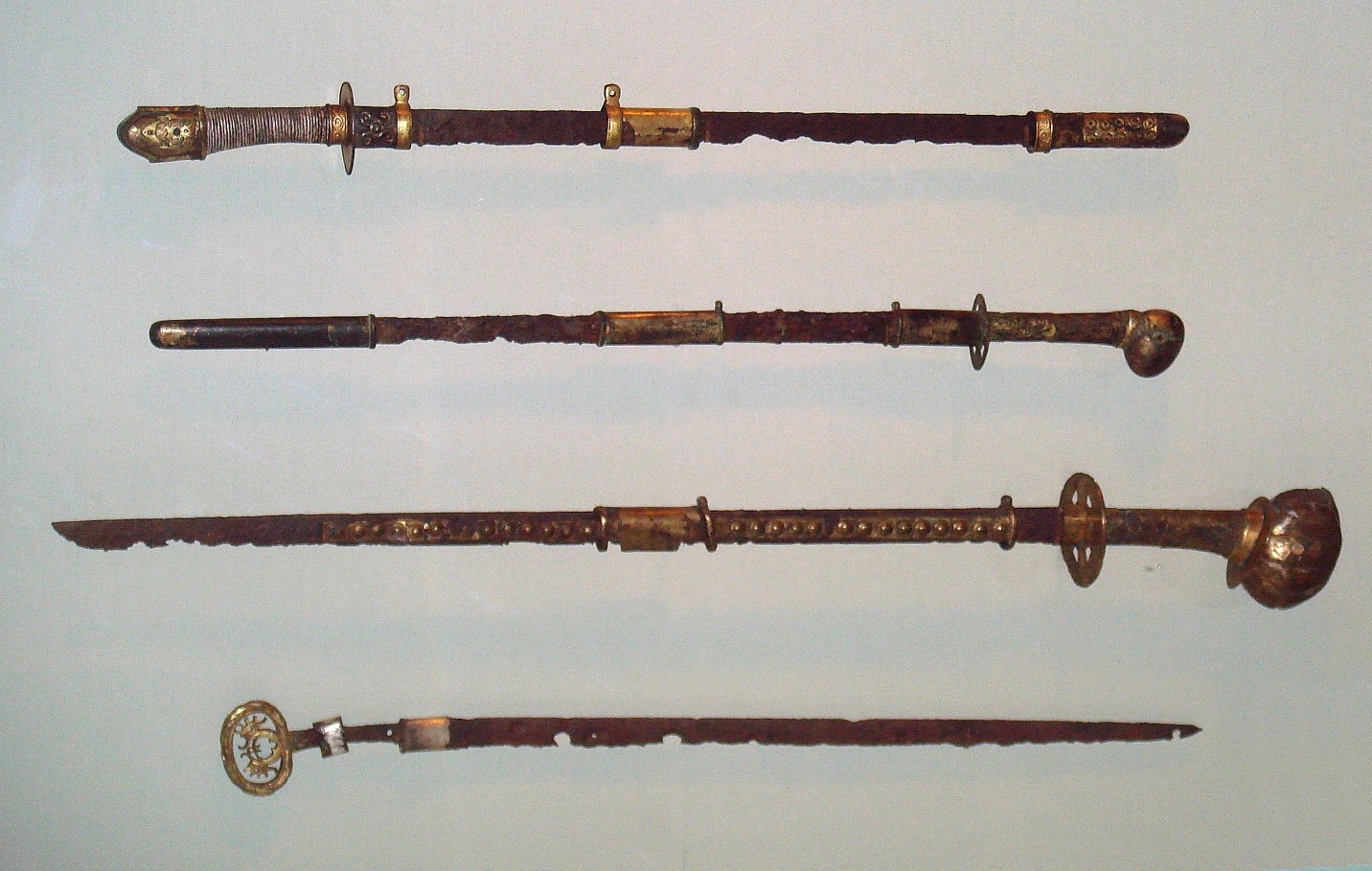 Before the katana, before the tachi, even before differential hardening techniques the Chokuto took its place on the stage of Japan’s martial history. These swords were straight, single edged, and with a chisel tip reminiscent of what katanas would later have. While they were not as advanced as later Japanese swords would be, for the early Japanese they must have been light years ahead of what came before.

Unfortunately, as the Chokuto was primarily in use prior to the 9th century few examples have survived to modern times. We simply know very little about them (compared to the vast amounts of knowledge we have available on the katana). This, coupled with the incredible popularity of the Japanese katana, have made modern replicas of the Chokuto incredibly hard to find. Most examples are Chokuto in name only, and more closely resemble – you guessed it – the ninjatō of Japanese ninja film fame. Here is one example of a legitimate Chokuto blade, unfortunately discontinued, that we once offered at the Sword Buyer’s Guide. 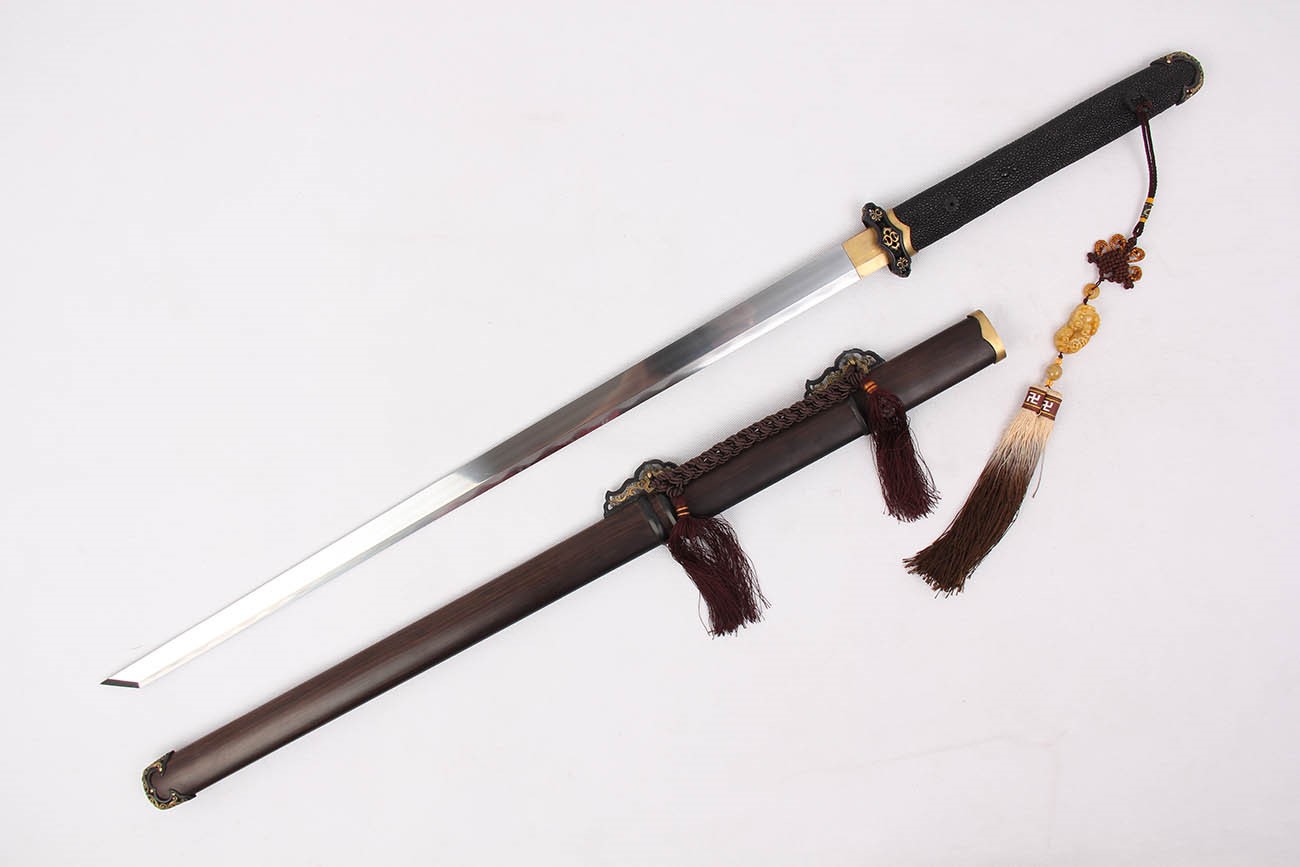 While not a Japanese Ninja Sword, the Chokuto may be the closest historical design we have to the ninjatō – even if they were ancient history by the time the Shinobi came along. Alas – while Japanese Ninja Swords are great fun in film and in our collections, it is there where the trail ends.

At least for now..

In the meantime, if you are in the market for functional replicas of all the variations of Japanese Ninja Swords you can find one of the best collections right here at the SBG Sword Store.