The Leuterit Sword is one of 3 classic Viking Sword designs by India based sword manufacturer Windlass Steelcrafts.

Having stood the test of time with a company that is well known for discontinuing its sword models, it is clear that they must be doing something right with these replicas (Editors note: looks like we spoke too soon, as this model was finally discontinued in late 2020). 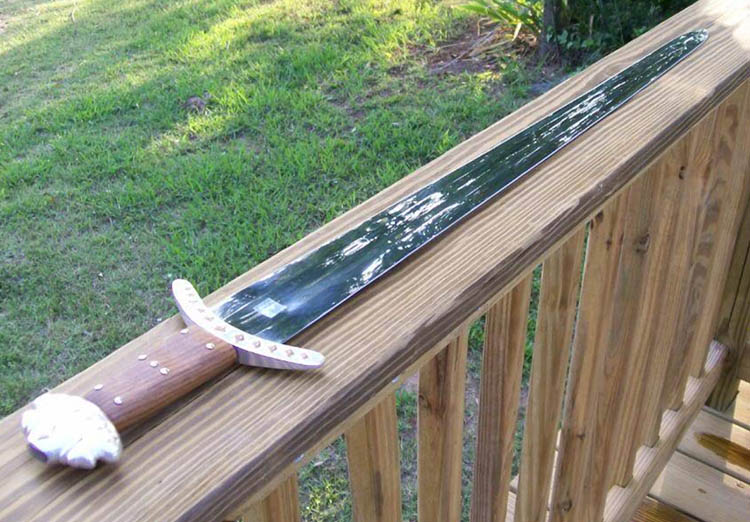 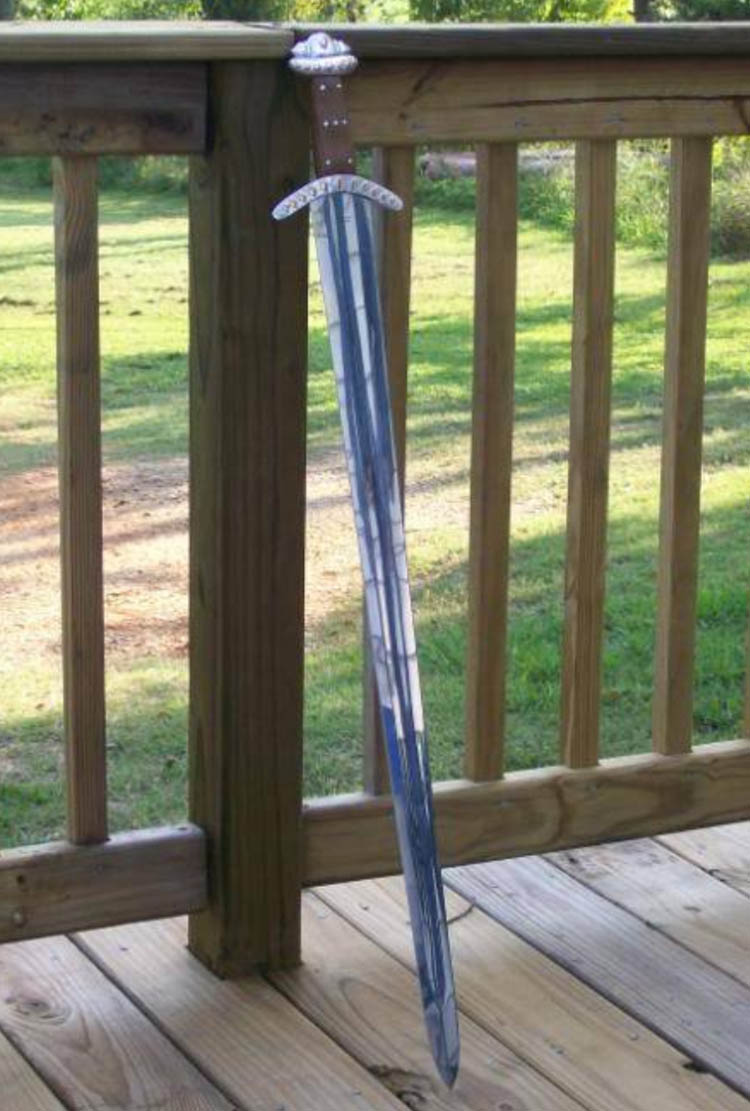 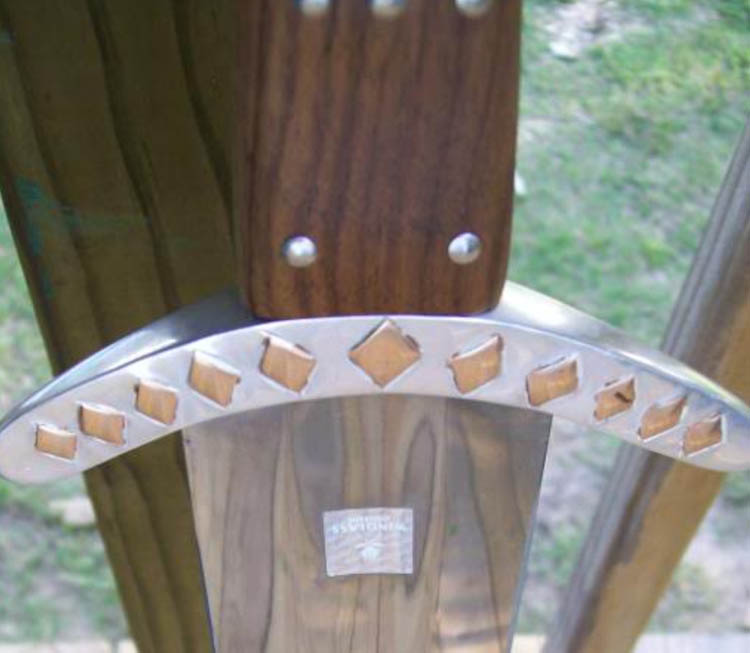 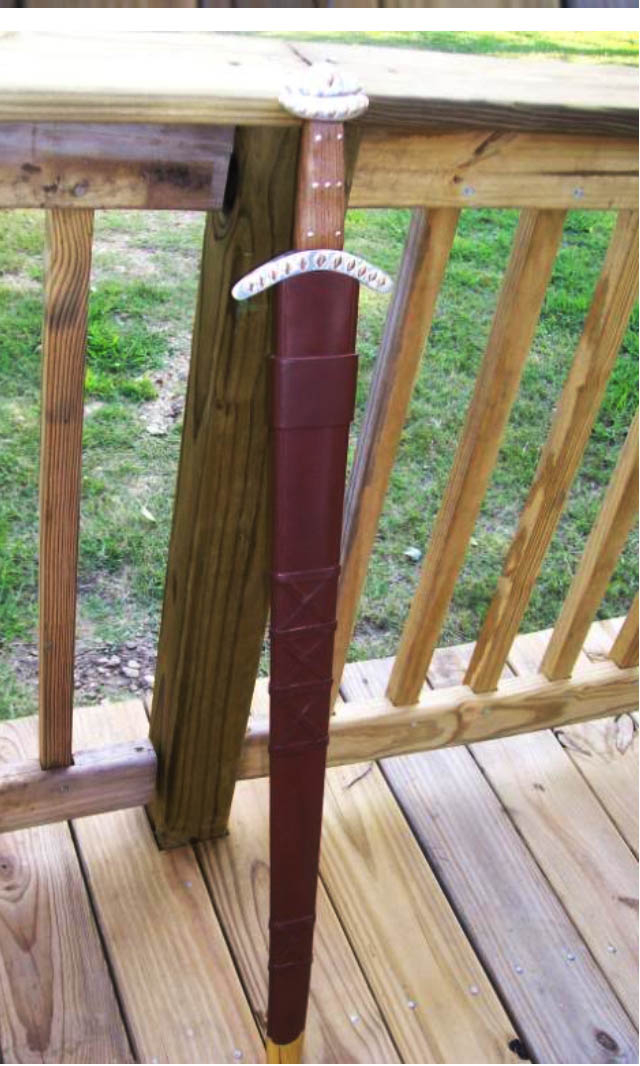 After waiting for quite sometime, the sword finally arrived. I have had this sword on order since June from Reliks in Canada. I could have ordered it through a couple of other companies who had it in stock, but after doing some research, I became impressed with Reliks' customer service. Both Chris and Jamie at Reliks really went above and beyond with any questions I had and putting up with me pestering them.

The sword came in a well packaged cardboard box. After opening the outer cardboard, I found both the sword and the scabbard wrapped in paper and surrounded by bubble wrap and shipping peanuts.

I unwrapped the sword and wiped down the blade, then took it outside for some dry handling. I was a little worried about the infamous "windlass whippiness". With a few swings I was pleasantly surprised. It has just a slight whip to it but given the weight and flexibility of the blade, not near as much as I expected.

It has been said that Viking swords are nothing more than clunky beaters and I strongly disagree with this sentiment. The Norse culture was far from the brutish barbarians that history sometimes make them out to be. They were a very proud, intelligent and independent people. Their swords are a reflection of this. I mean lets face....any people that begin a sword by extracting bits of ore from the bogs near the shore, and melting it down, are a people who are meticulous, practiced and able to see in the abstract... certainly not the mindless viking warrior we see all the time on T.V. The man who made the original version of this sword inscribed his name on the blade. "Leuterit"

Now for the stats and there are a lot of them!

Both the pommel and guard have a silver finish with copper lozenges. 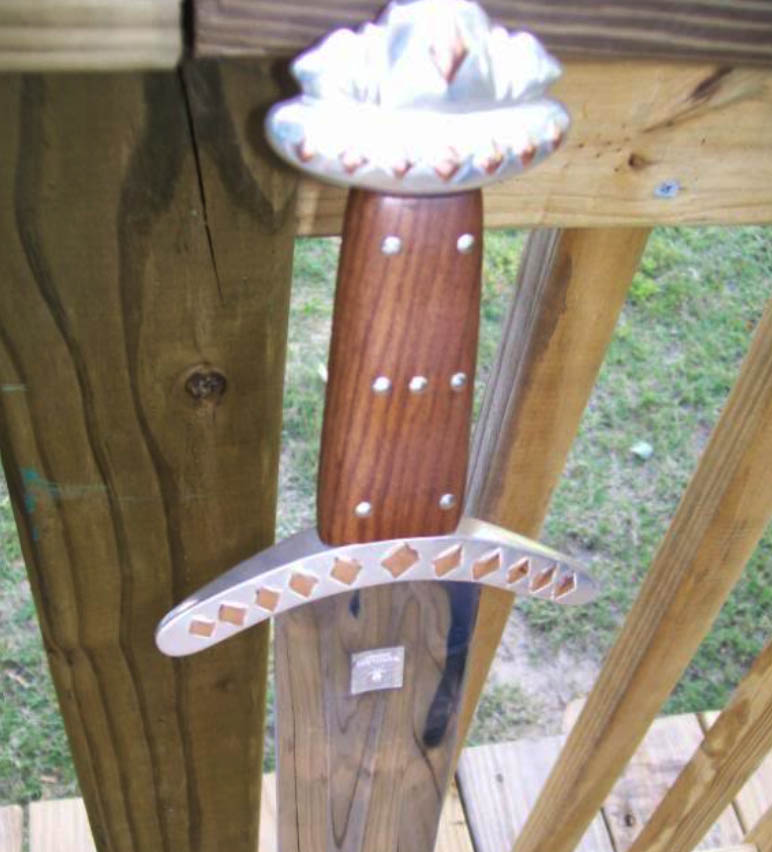 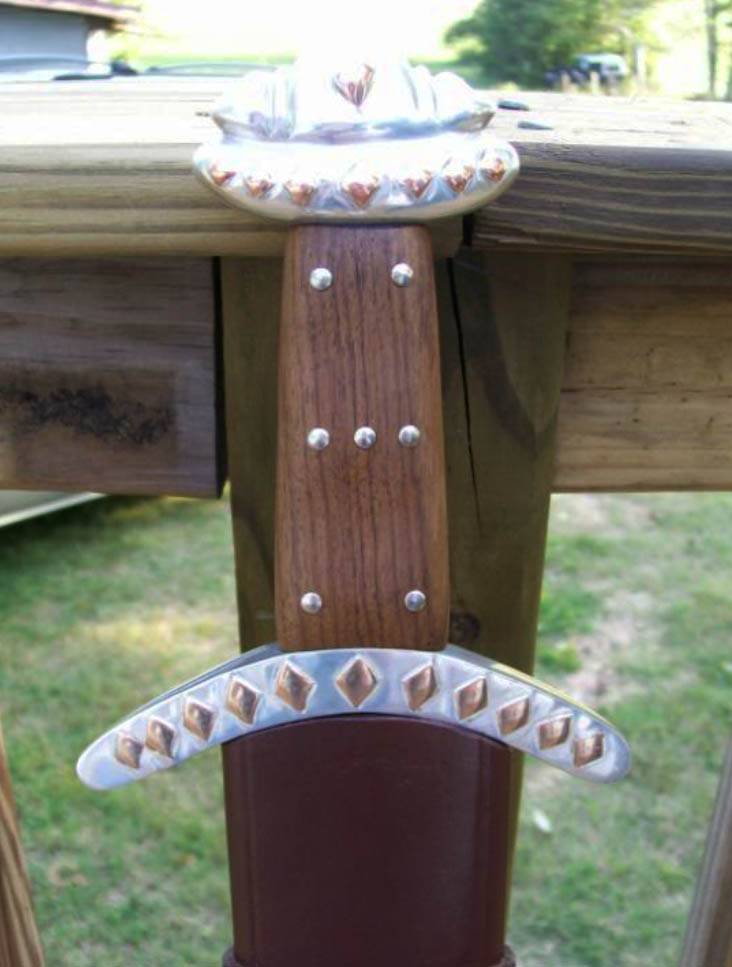 The handle appears, by the grain pattern, to be oak with decorative silver pins placed throughout. Looking closely at the lozenges on both the pommel and guard, there are small grind marks and the copper doesn't cover two of the diamonds completely. 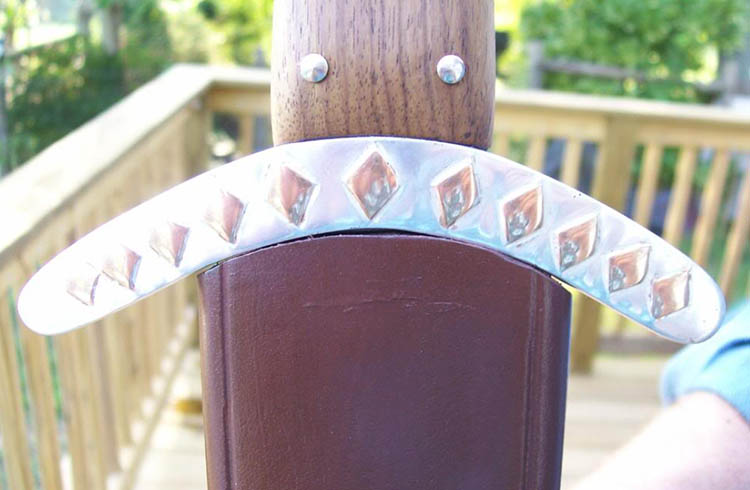 I don't really consider this a big deal, because it is not noticeable unless you are being critical. The crossguard itself tapers nicely as it goes into the rounded edges. 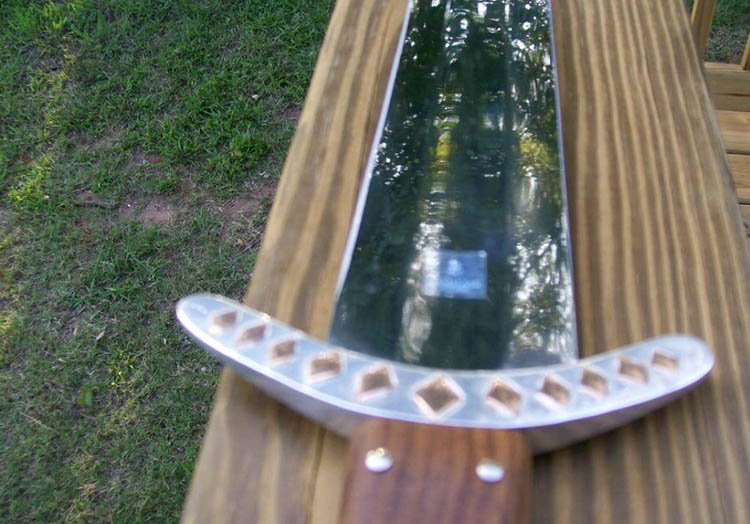 Overall it is aesthetically pleasing. The hilt assembly as a whole is rock solid!! There are no gaps what so ever between any of the fittings and not a hint of any kind of rattle. The tang is peened, which makes for a solid construction. 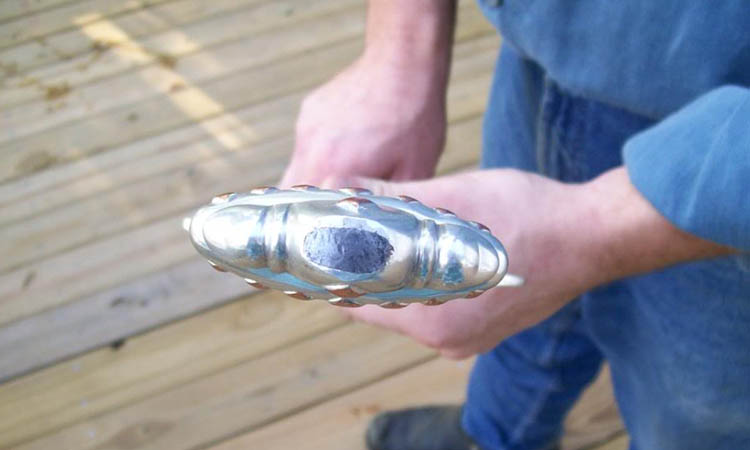 Around the peen itself there are small hammer and file marks this doesn't bother me, as it's just a reminder that it is done by hand. I have seen much worse on more expensive swords.

The scabbard is made of good quality leather with a brass tip, and a decorative thong wrap. 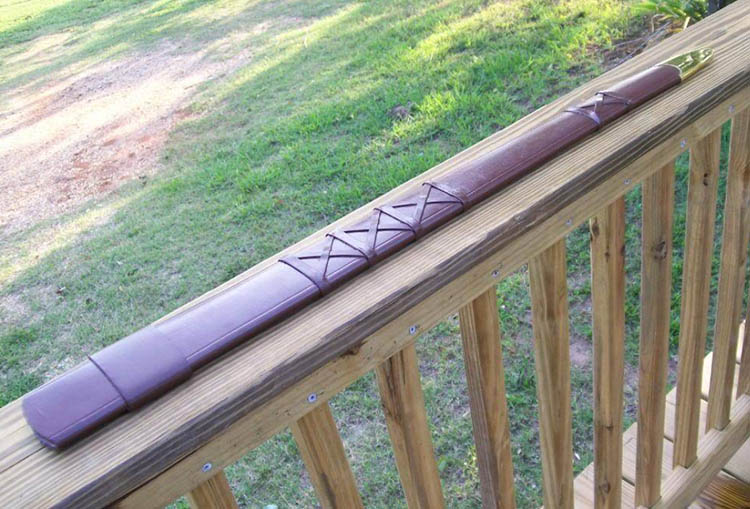 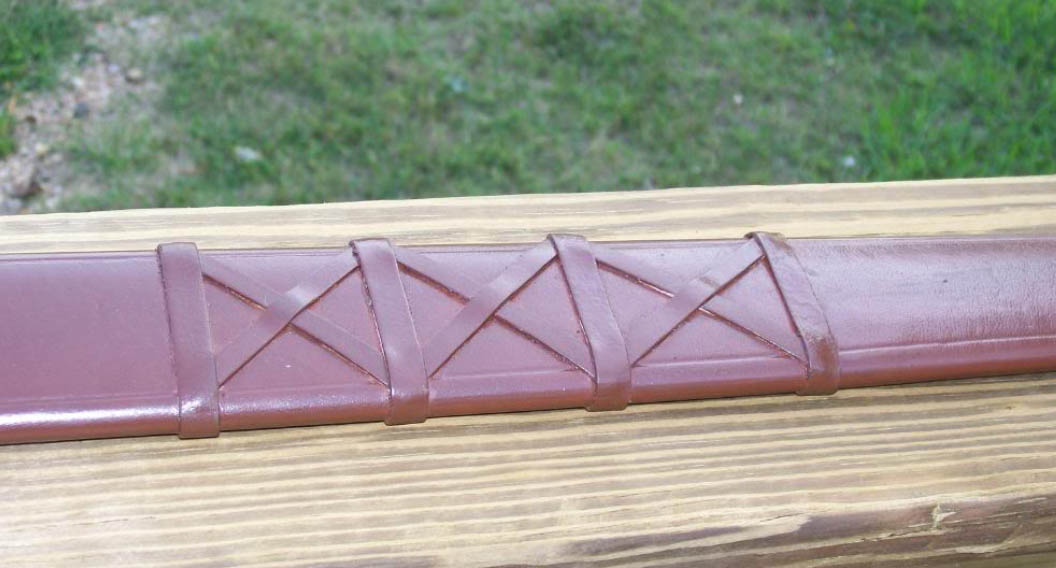 All parts of the scabbard tightly sewn and the sword fits so well that I can hold it by the brass tip and it wont slide out. But when I draw the sword, it comes freely with no resistance. The only issue with the scabbard is a dent in the brass tip, probably done during transit. 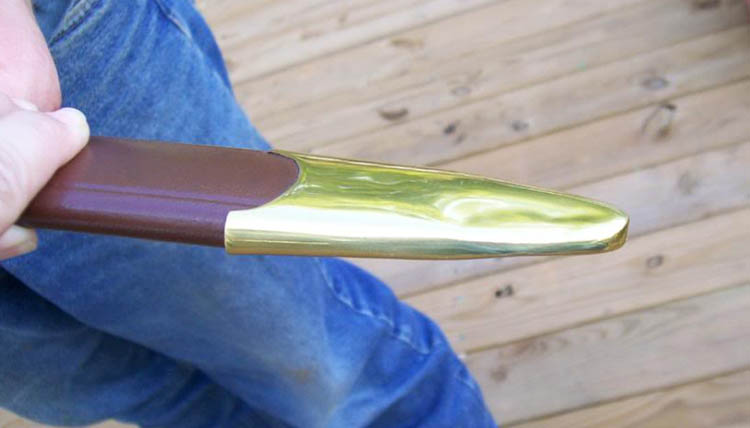 When I wiped the grease from the blade my first word was whoa! Windlass is sometimes hit or miss with their polishing and sharpening. This time they hit it out of the park. The blade is polished to a high mirror shine with not even a hint of a grind or file mark anywhere. As you can see in the following pictures, the blade all but disappears in the reflection of the grass. 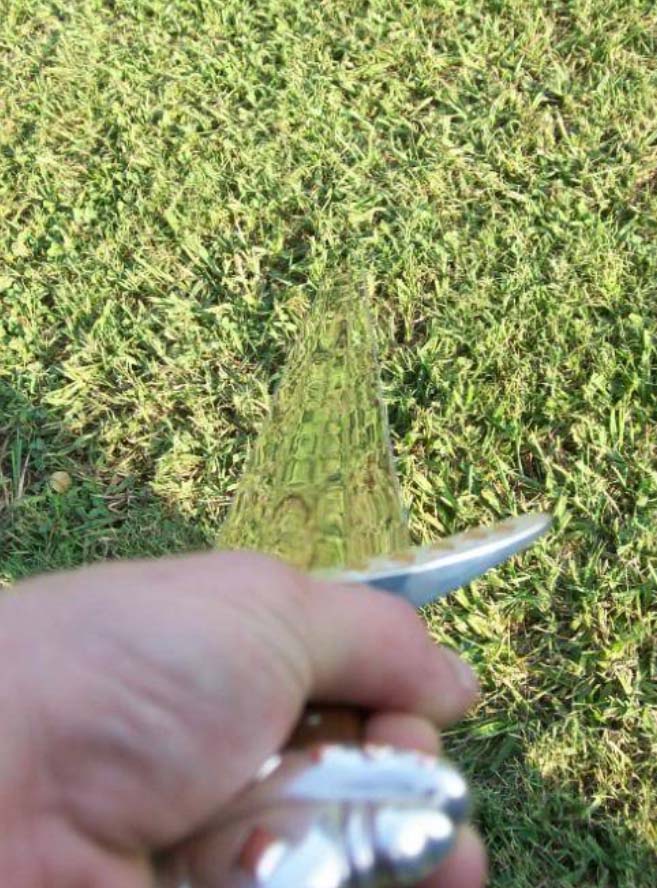 The fuller is deep and wide and has no real deviation. You can tell a couple of hammer marks, but only if you are looking real close. it has a very nice even distal taper that leads into a spatulate tip. This can be seen in the hammer and handshake grip pictures. 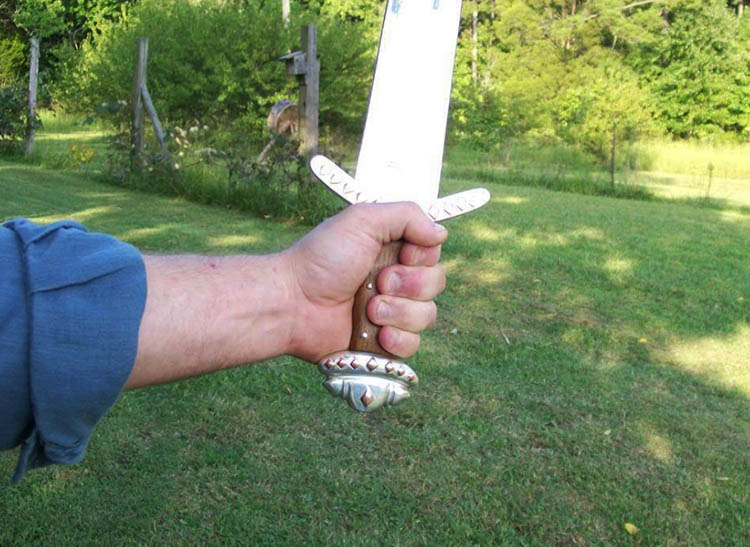 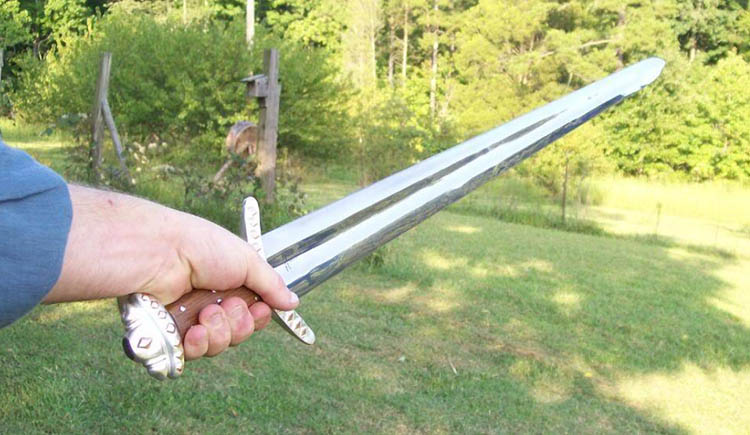 The correct way to hold and use a Viking Sword, the so called 'handshake' grip

All in all a great job. I ordered this blade pre-sharpened, simply because I saw Paul's review of the Stickle Stad. What impressed me was how hard Reliks and Windlass worked to fix the sharpening issues. I wanted to see if they still maintained that level of quality control. Simply put, they did. The secondary bevel is even and straight the whole length of the blade with an edge keen enough to cut paper with a smile.

The flexibility of this blade is what I have some to expect from Windlass. So flexible it's almost comedic. Every time I performed a pressure test on the pommel the blade immediately sprang back to true. The pictures say it all. 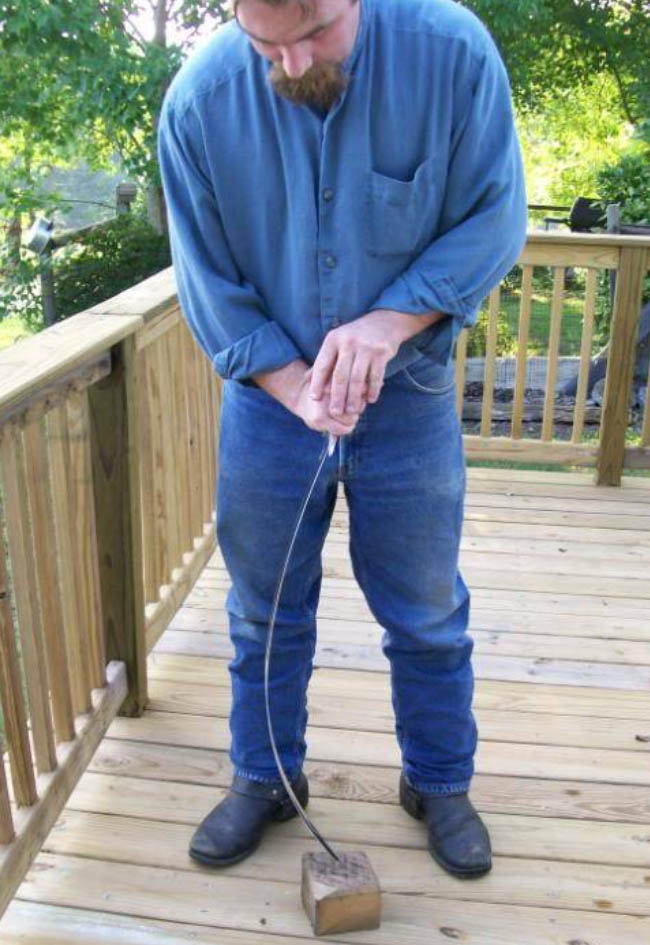 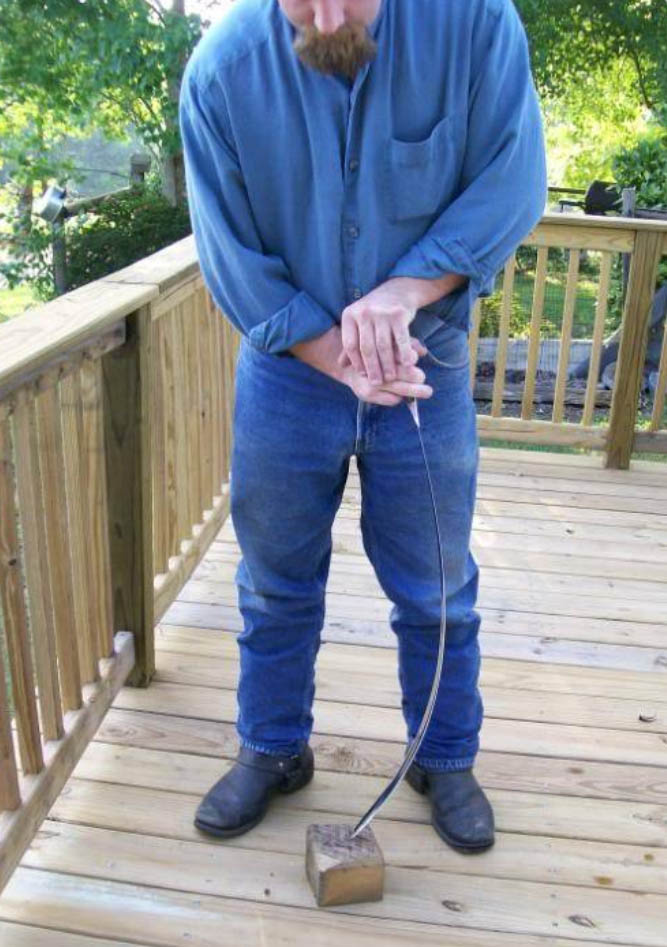 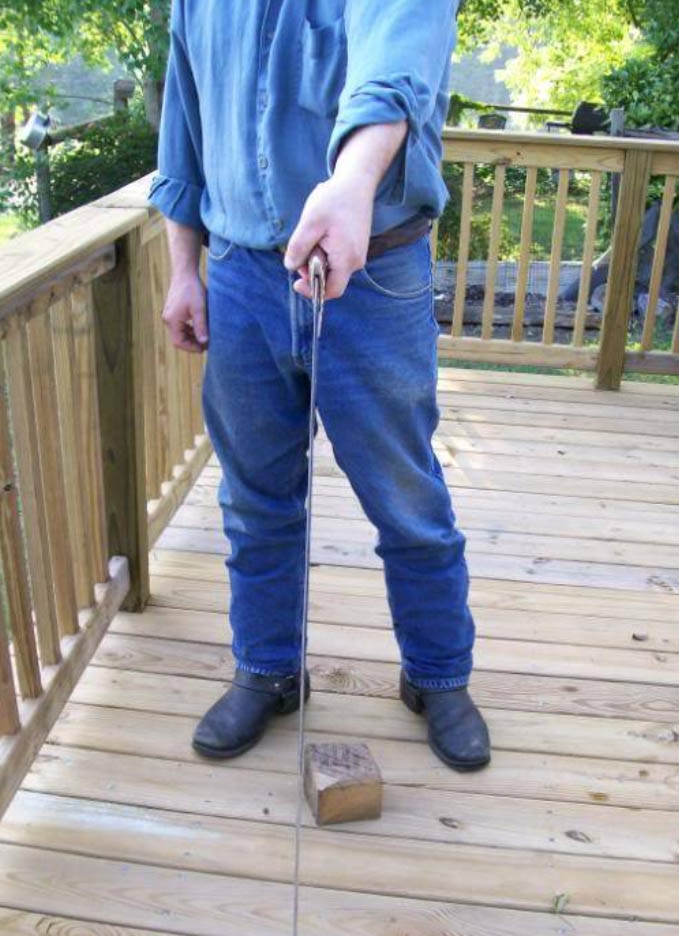 The first video is with a 16oz Coke bottle which the blade had no problem handling.

This video is a thrust and cut test on a milk jug.

The following is cuts with the spatulate tip below are also a picture of the results. 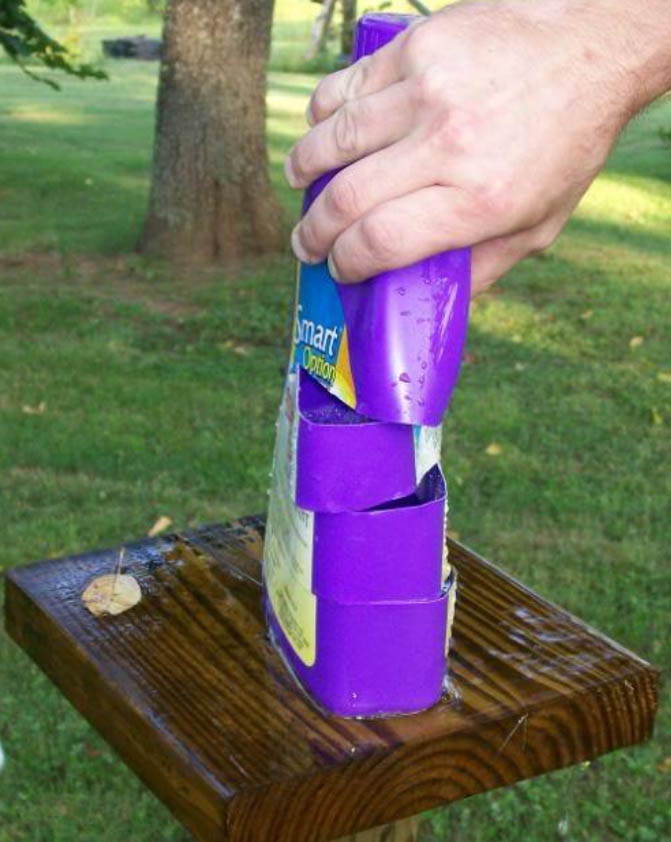 This video is one bottle on top of another.

This one is one bottle on top of two others.

The last one is cut test on a Gatorade bottle.

As you can see in these videos, there really is hardly any whip at all to the blade, and Reliks worked hard to insure an excellent edge. I quickly fell in love after the first cut test.

Being a replica of a sword found with the name Leuterit etched on the blade, it's historical accuracy is well above average.

Although the name is not etched on this, it is incredibly close to the originals I have seen first hand. Even though it is lighter than most Viking blades, it's width, length, and fuller depth are spot on. I can't say enough about the hilt assembly as a whole, it truly is fantastic. If you are in the market for a Viking sword, then I highly recommend this one.

I hope this review of the Leuterit Sword has been helpful. To return to Dark Age and Viking Swords from Leuterit Sword, click here