Fixing a loose peened pommel is not as uncommon as you might think.

While a peened pommel will often outlast a hex nut assembly - once it does start becoming loose it can be a pain to fix, especially if epoxy was used when it was peened (which is fairly common). Here's some advice on how to fix it by Brendan Olszowy: 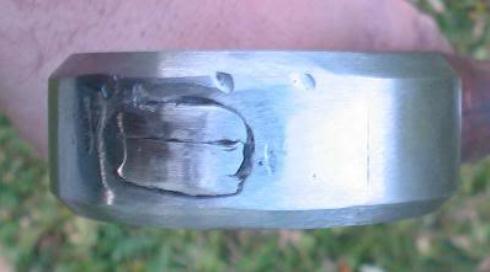 I have had good success fixing a rattly cross with this technique. I don't know if others have done it, but I had great success in firming the cross back to a solid feel.

We all know that supposedly you can bash a peen to tighten things up, but many swords have the grip epoxied on as well and hammering it down may serve to release the grip of the epoxy or quite possible break the timber.

I use some 5lb monofilament fishing line. Tieing the end to the guard as a secure anchor, I then pull it down tight between the cross and the grip, around the tang, then do a few laps around the tang (5 or 6 i'd say) until it reaches the outer surface and no more can fit in. Be sure to pull it in as tight as you can, with mind to the breaking tension of the line, which should be much higher then 5lb.

When I got as many laps as I could fit around, I pulled out the last half a lap, smeared some epoxy over it, then pulled it in tight again, and tied off to the guard while the glue set overnight. You can also try to push more epoxy in with a spare bit of line.

Wipe the excess epoxy off with a rag while it is wet.

The next morning I trimmed it up so it sat tucked in the groove out of sight and mind.

ADDENDUM: If you are having trouble actually disassembling a peened pommel (such as to customize it) because it has also been epoxied, you can heat it with a torch, the eye of a stove or a pot of boiling water to soften the epoxy, then clamp the pommel in a vice and use a crescent wrench to turn the blade and unscrew it.

You run the risk of stripping the tang or even twisting the end off if you do this, so use some care: If it seems like it's moving keep going but if it is firmly stuck heat it some more. It should feel like you are twisting a tootsie roll if the epoxy is soft enough to let go.

I hope these tips and this tutorial on how to fix a loose tsuba has been helpful. To return to Navigating The Sword Care Maze from Fixing a Loose Peened Pommel, click here