The Cold Steel MAA Messer, part of the MAA (Man at Arms) series is touted by the company as a more affordable alternative to their standard line - in their own words:

"these practical and battle ready swords lack the gleaming blades and polished silver steelwork of our other swords, but they pack a resounding punch where it counts! Approximating the quality and performance of our high end swords, the Man at Arms collection features a selection of some of our finest high performance blades but at a markedly reduced price."

In practice however, there is not much price difference between the Cold Steel MAA Messer and the original once vendor price competition is factored in (around $25 cheaper - $179 vs $287 for the original, which we reviewed here) - however, it's not just the same sword only with a black steel finish..

It has actually been reinterpreted and redesigned to be much lighter and more manageable than the original - and popular YouTuber Skallagrim clearly likes this rendition more.

So let's take a closer look at this sword to see how it stacks up and help you to choose which version best suits YOUR personal style and tastes.

I’m not sure how I ran across this sword. I was researching completely different, I know, but somehow ended up looking at a review of it that seemed very favorable and put it on my list of things to check out at KoA (Kult of Athena). Funny thing is I’ve always hated messers because they look like just what they are: big knives. But I think this one grabbed me because of the simple yet elegant guard, the wide blade, and the blued finish. Oh, and the fact that it wasn’t just another big ol’ Grosse Messer – the compact size was an interesting variation. In person it didn’t disappoint, so it was the one that came home with me from KOA, out of a possible list of eight!

The sword was packed in a sturdy cardboard box, with lots of cardboard inserts to keep the blade from moving around inside. The sword was slathered tip to pommel in grease, with clear plastic over all, and a thick plastic tip protector. If it had been shipped, it would have been more than secure.

As far as I’ve seen, swords rarely handle as you expect them. You can look at measurements and weight and points of balance over and over and still have a sword surprise you when you pick it up, but this was a more than a pleasant surprise. It’s light, but it has presence. The thickness of the handle is what you expect. The curved grip feels secure and smooth. The blade presence is there, but just barely. But it doesn’t feel overly light. When a sword is too light, I get the impression that I’m not going to be able to put the needed muscle behind it to get it to cut well, but that isn’t there with this one. You can tell that when it moves, it will be heavy enough to get through targets with ease. And the other part of that is you can tell it’s sharp enough to do the job. Cold Steel is fantastic about that.

Starts out straight and true and flows into a perfect curve, has a well-executed fuller, and a deadly sharp and pointy tip. This all adds up to be very nice to look at. Up until now, I hadn’t liked clipped tips, but it looks fantastic on this one. I think it’s because the blade is wider there, just before it starts to drop. You can see the secondary bevel, but the sharpening is very nice and even, and I feel it’s sharper than a lot of swords tend to be. As for thickness, it strikes me as appropriate.

You’d think a squared handle wouldn’t be comfortable, but this one is. And I have long fingers, but it seems to fill the hand just right. The wood and the finish is nice, too. I really like the dark red. 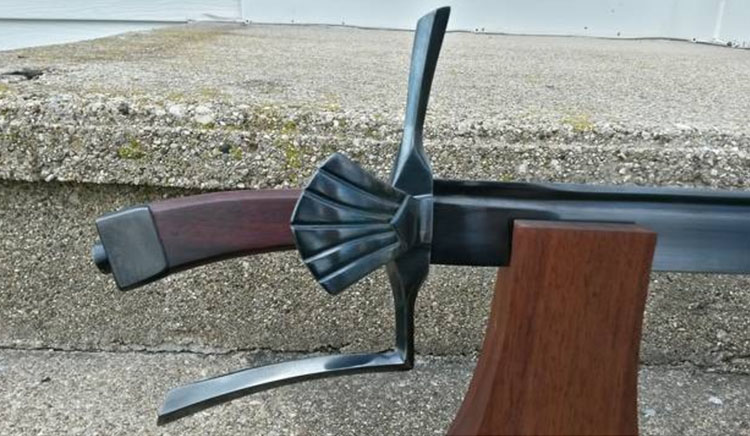 Probably the most attractive part of this sword. The clam shell is neither too big nor small, and the way the cross suddenly turns a right angle into the knuckle guard is what catches my eye. And said guard isn’t perfectly straight, but has a very slight curve inward. There is so much style here! Not sure what the tang looks like under all that, but it is held by two brass rivets.

The pommel really is just a cap, I think, as should be, it sounds. You don’t feel any weight there like you normally would in the pommels of many other types of swords, but it’s not needed to counter balance the blade. It’s simple, functional in that it holds all the parts of the sword together, but isn’t designed to hold your hand on the grip.

The usual for Cold Steel. Black leather over wood. Blued steel at either end. Nice and sturdy. One thing I’m not sure I like is the extra leather pieces they’ve put inside the throat to help retain the blade. It works, but it also is so tight that it wipes the oil off instantly. So when I take the blade outside to cut with, as soon as I draw it the protective oil is mostly removed already. Good thing there’s the bluing to stand between the steel and the water, I guess.

How can I put this? This sword handles SO well. I’m still surprised by it. Dry handling, great; cutting milk jugs, AWESOME. It just sails through targets. And it goes exactly where you want it without having to force it at all. Recovery is effortless. You can reverse the direction of the blade in no time and slice and dice those milk jugs! Oh, and I was primarily cutting with the furthest part of the blade, which I don’t often do. Normally that would result in batting the jugs off the stand, but the cuts were still perfectly going through. Thrusting with that wicked tip is of course very easy to do also. It’s just FUN, no matter what you do!

Oh, and the satisfying ring the blade makes is music to the ears! It’s not often I find a blade I’m this amazed with and find so easy to wield! Being slight of frame, perhaps others would find it too light, but to me it’s near perfect. In probably 17 years of sword collecting there have probably only been about three or four swords that have felt this “magic” in the hand to me (one being the Atrim 1509, and another the Dynasty Forge Chinese Yanmaodao).

It must feel similar to historical examples, if they were designed as sort of utilitarian, self-defense type blades, but I suspect this one may be a little easier to move due to its light weight.

Overall, I feel it’s very worth the money. I am not disappointed in any way, which is rare. Reading other reviews, looking at pictures and stats, and getting yourself worked up to get a new sword so often builds up an impression of a blade that the actual item falls short of in some way, but that is absent here for once. There’s nothing I wish they would change at all. I would buy from Cold Steel again. Currently I only have two other items from them, but thus far they have not disappointed. And of course KoA is my favorite store of all time and I will continue to shop there.

Kristie bought her MAA Messer HERE at Kult of Athena for $179.95 which is easily the best price for this sword on the internet and a lot better than the full price of $299 over on the Cold Steel Website...