While this sword has been discontinued long ago, it is preserved here for information purposes and to show that not all sub $100 swords are junk..

The 'Masahiro' Bamboo caused quite a stir when it was first released in 2006 by ebay seller 'Sunpoint USA' - thanks in no small part to Marc Ridgeway's somewhat controversial review on SFI (Sword Forum International).

Here was an exceptionally cheap sub US$100 sword that ticked all the boxes, handled like a dream and was about as durable as you can reasonably expect any sword to be - and as you can imagine, the first favorable review received a mixed reception - from 'where can I buy one?' to barely contained outrage by Katana purists.

By 2007, it was all over - these swords were no longer being sold anywhere (in truth, they were purchased by Sunpoint in bulk from JinLong Sword Company at a discount, and while the sword is still available on their catalog - the same deal on them is long gone).

However, the legacy of these low priced beaters continues to this day, as does the swords themselves - and in this review Marc takes a look at the sword that started it all again in 2009 after 3 years of use and abuse.. 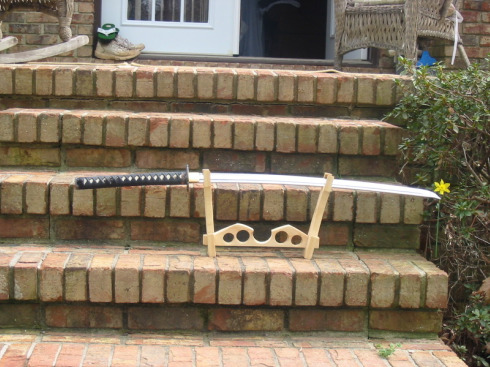 Hey Everybody... this is a just for fun review on a boring day. A bit over three years ago, I purchased and reviewed the Masahiro Bamboo on SFI. My review was VERY favorable , maybe even a bit obnoxious, and it caused quite a stir... and a bit of a demand for these swords.... so much so that the sellers themselves began counterfeiting them after they sold out... funny stuff, that.

Masahiro is a trademark owned by Master Cutlery, along with Ryumon. Master is a rebrander, meaning they buy swords from various sources and resell them under their brand name ... one that was a winner was the sword I dubbed the Bamboo (Model JL-813) made by JinLong Sword Company.

There was a very large shipment of these that were sold by SunpointUsa/ Handmade Sword on ebay for $.01 starting bids. I ended up buying many of them, and saw some variation in the model, and got some for as low as $26. The very first one I got was a damn good one.. and i have held onto it, and used it heavily. Abused it, really.

The sword in this review cost me $56 plus shipping. Many on SFI predicted catastrophic failure within a month... I stated that I would be quite happy with a month, from a sword that cost the price of a night out to the movies...

Now, after 3 years, the sword still survives, and I am still quite chuffed with it.

This review will endeavor to examine its durability. 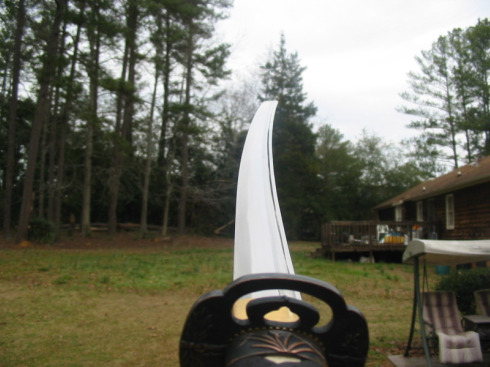 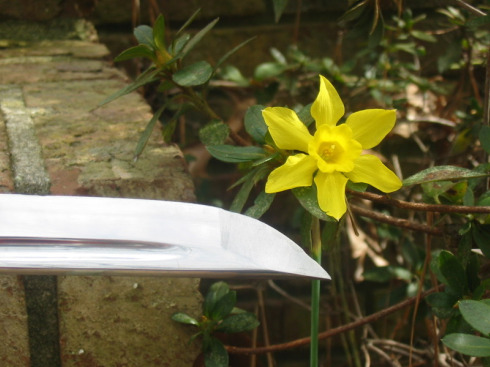 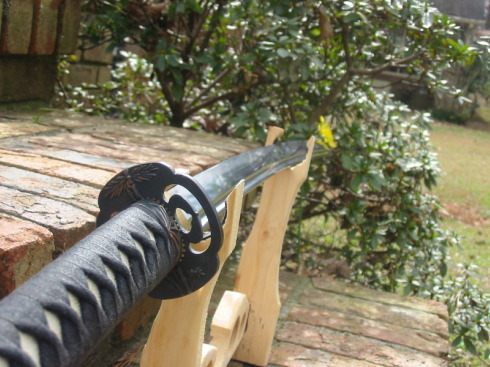 Sugata is shinogi zukuri with chu-kissaki. Kissaki is counter polished, but has that nice diamond flare called mune-kado (I think).

The fuchi-gashira and tsuba are cast in copper, or bronze maybe, and have a bamboo theme.

The hamon is acid etched, and suguha.

Tsuka-ito is black cotton, and the folds do not alternate, the white same is in panels 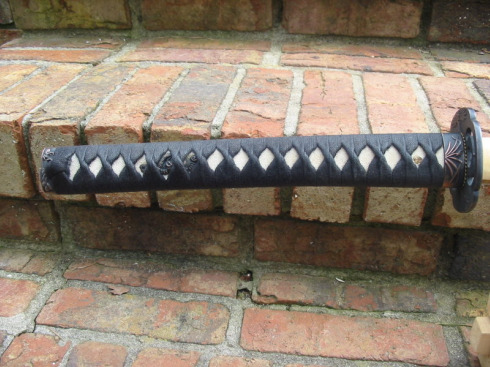 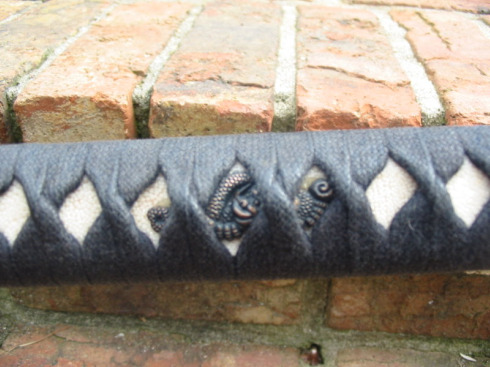 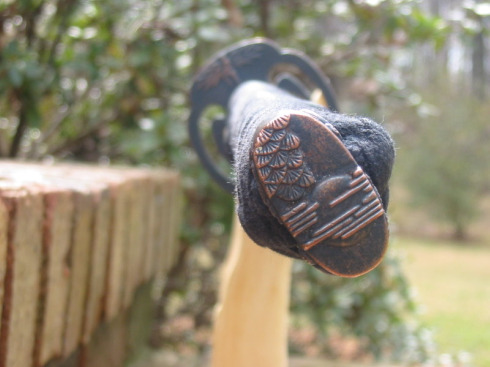 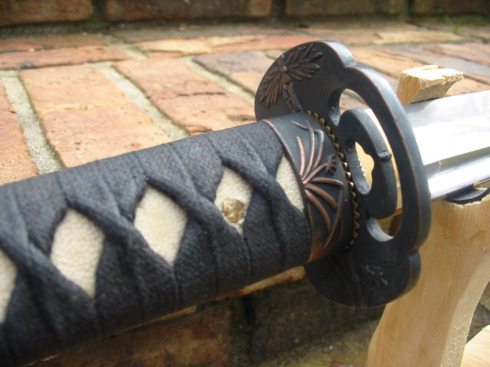 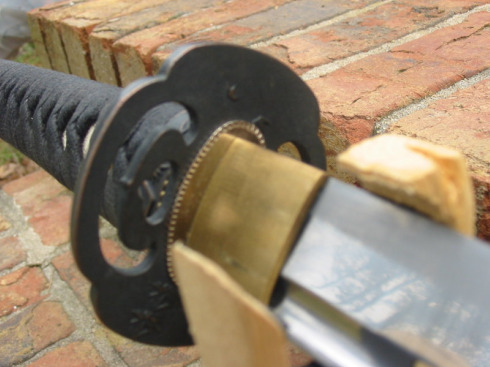 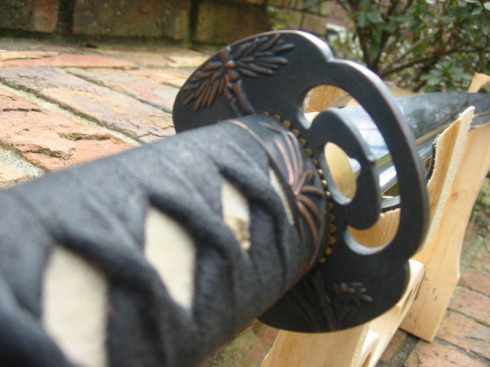 The fit and finish on this sword is a mixed bag. There are some shortcomings, as you would expect on a katana of this price, then again, some things are pretty damn surprising.

The blade is nice and thick, and has some niku. The kissaki is nicely shaped, and the counterpolish "clean".

The bo-hi is a bit shallow, and tapers off rather than terminates, but the polish is a smooth mirror polish. These actually go hand in hand, because on these cheaper blades like this, the machine that cuts the bo-hi also mirror polishes the blade.

The tsuka-maki is tight and symmetrical, but does not alternate and the ito is not so good. On many cheaper swords tsuka ho are sercured by two mekugi, because it is a serious shortcut to making the tsuka fit correctly... it will just "ride" on the two pegs, rather than be fitted. The Bamboo is actually single -pegged , and the tsuka fit is great.However it does have a bit of an axe-handle shape.

The fittings are cheap, and mass-produced, generic fittings, but they are fit to the sword very well. Habaki fit is good as well.

All in all, despite the shortcuts taken, the fit and finsh is superb. 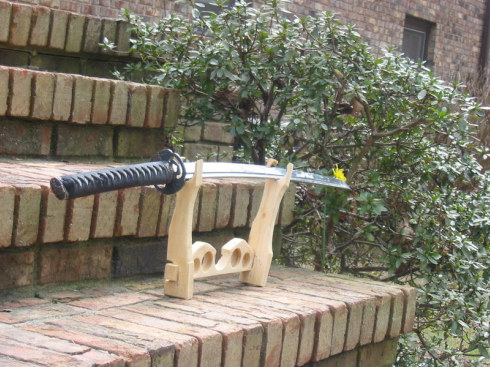 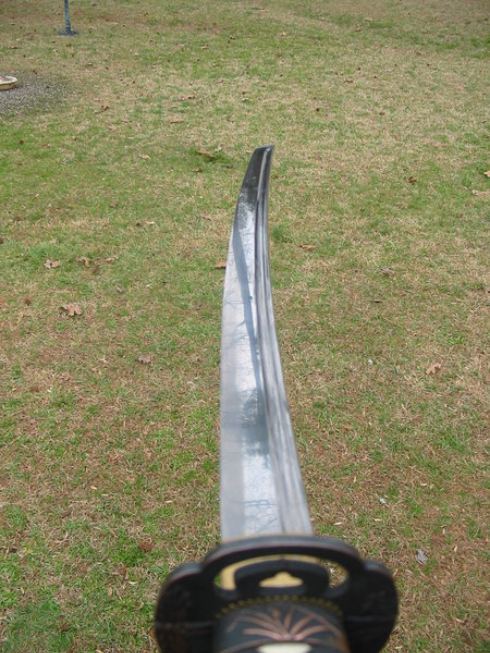 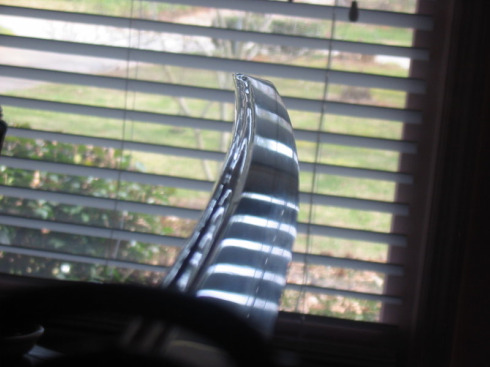 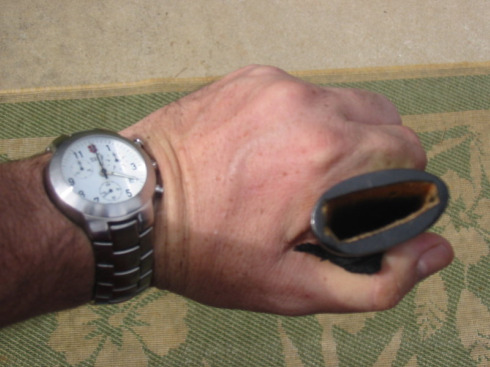 The Bamboo handles like a DREAM. It is very light , 2.2 lbs, with a point of balance 5 inches from the tsuba. It handles as well as any sword I've ever had, and better than many... the best comparison I can make is a Citadel Yoshi, A newer PK , or the Tori, but with a bit more authority than those... you know you are holding a sturdy blade. Its just a marvelous feeling sword.

If the ito were a bit more tactile, and the tsuka-ho better shaped, it would handle fine indeed. 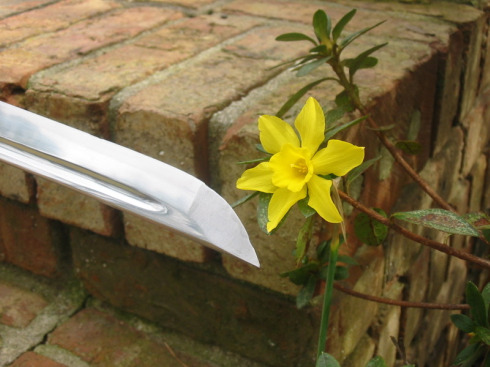 The Bamboo is a superb cutter. It is very sharp, and kind of thick at 7.5 mm kasane with the 27 inch nagasa. Some of these I had were up to 28.5 inch nagasa , and were considerably thinner. This one is very robust.

With its attributes it handles light and heavy targets well. It cuts bamboo up to 4-5 inches very well, and handles dry bottles just as well.

Lately, since the Imperial review , I'm really getting into cutting golf balls. A lot. They are a great target... small, hard .... they take precision and tip speed. Not every sword would i feel comfortable cutting golf balls with... not any Hanwei I've ever owned (but the Wind and Thunder) only Oni forge and the Masahiro Bamboo... they are sturdy enough to confidently attck golf balls with....

Today I cut empty bottles and golf balls... this $56 sword cuts better than many swords 10 times (or more) the cost that I've owned. 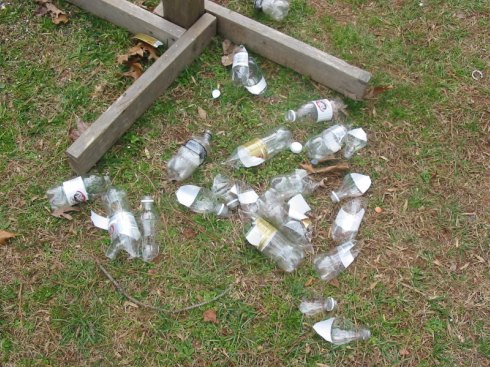 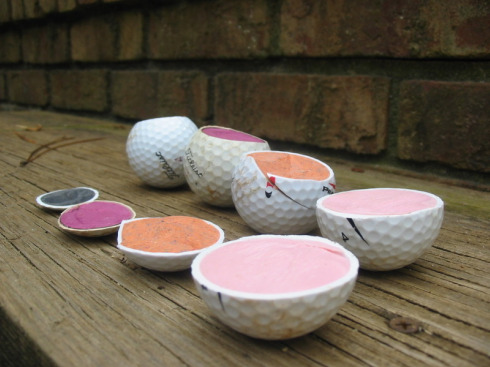 I have to say that the durability and value of this sword is unparalleled by anything else I've seen.

It has been used hard, and has help up well... better than any katana I've ever owned... I chipped a Hanwei PK and a Tori on much less than this sword has been through.

Most of my Oni Forge swords have likely been as tough, but have not been used near as hard as this sword...

The attributes of it are the attributes of a great sword... its weight, balance , geometry , and durability all show it to be a damn well made sword. If the price was approaching $200 the compromises such as machine -cut hi, the tsuka-maki and the fittings would outstrip the value... but at $175 and under , this sword has few peers IMHO. Were Jianlong to make a sword with these specs to a higher standard , it would easily compete with any of the mid range ($200-$600) cutters on the market.

These are unavailable as Masahiro or off of eBay now.. and not available from handmadesword, those they offer now are impersonators, trying to take advantage of the popularity of the "Bamboo" and the value associated with it...

However the true manufacturer is still around, and if one can find these for a decent price I highly recommend them.

This sword has outperformed, and outlasted everyone's expectations, and predictions, including my own... after three years, and dozens of other katana, it is still a sword I am proud to own, and one of the few I have held onto over the years.

I hope this 'blast from the past' review has been entertaining. To return to Cheap Samurai Swords under $100 from Masahiro Bamboo Katana: 3 years later, click here