The Valiant Armoury Medieval Falchion was a curious sword.

Indeed, of all the swords I have recently reviewed, it is one of the most unusual.

Something of a hybrid between a historical Falchion, and a fantasy cleaver, this heavy piece had quite a few surprises in store for me, as you will see soon enough...

These early model Valiant Armory post-Sonny Suttle takeover of the company have been phased out a few years ago, but the review is preserved to show the 'transitional' point and for general informational purposes.

I am a big fan of medieval Falchion. As dedicated one handed choppers that required little training or finesse to ease with deadly effect, these swords have a long history in Europe and were used by both the conscripted peasant soldier and noble lord in all manner of combat situations.

The medieval Falchion by Valiant Armoury gives a nod to the historical appearance of these large swords - though is not based on any specific historical model as far as I can tell. However the overall appearance has a distinct 'fantasy' flavour to it - and there is little doubt that it looks extremely intimidating.

Indeed, my first thoughts on unsheathing it were along the lines of the famous 'you call that a knife, that's a knife' scene in the movie Crocodile Dundee - where he pulls a bowie knife on a thug in the city armed with a flick knife. Well, this sword would see even old Croc back down... ;-)

But there is something else about it that gives it a real sense of being a fantasy blade, something that I could easily imagine being in the hands of one of Tolkien's Orcs than in that of a medieval warrior. More on this later...

The pommel is a classic Brazil nut style, quite evenly finished and classic in its appearance, it fits this sword very well.

Travelling down towards the cross guard, we find two steel spacers against the pommel, a rich leather wrap of the hilt, a single spacer in the middle, and a mirror image of the first half repeating to the guard. 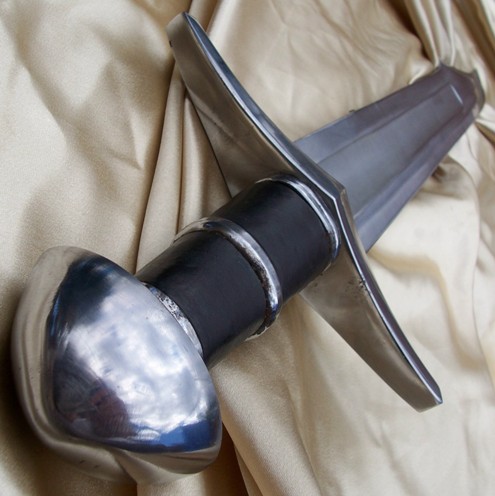 Appearance wise, the hilt looks great - though is marred by some minor rusting of the steel rings here and there, a by product of making the components in the Philippines during monsoon season no doubt. Curiously, though obviously a flaw, I did not find that the surface rust was actually unattractive on these fittings - especially as the blade itself was untouched.

The cross guards itself is a weapon in its own right! A little over 1.4 inches thick at the middle, it really does look a bit too bulky, though the extra weight no doubt keeps the balance closer to the hilt - so likely has a utilitarian element.

In terms of fit and finish, it was good - but could be better. Everything is quite tight, but there is the faintest rattling of the cross guard when wiggled. Nothing to be alarmed about, and quite common at this price point, but present none-the-less.

The scabbard of the Medieval Falchion is extremely simple, but visually - it works very well.

A richly veined dark brown leather with a black strip at the throat, it suits this sword perfectly - though to me, it reinforces that 'Orcish' feel. Normally, I don't like these Philippine scabbards, but in this case I am willing to make an exception.

The fit is tight, but not too tight, and it has a loop for attaching on a belt for the renfaire crowd or others who want to wear it.

The blade of the medieval Falchion is very thick - 5.9mm at the spine and features a 1" fuller down 3/4 of the blade that terminates in a squared off section near the flange of the rear facing (blunted) false edge. While this gives it some pretty imposing blade presence, it also negatively affects handling - something I will extrapolate shortly.

The overall shape is a bit blocky though, with the only curves evident at the false edge and tip.

It is however the medieval Falchions blocky look, thickness, width - and the wicked false edge and tip that conjures up images of a 'bad guys' fantasy chopper. 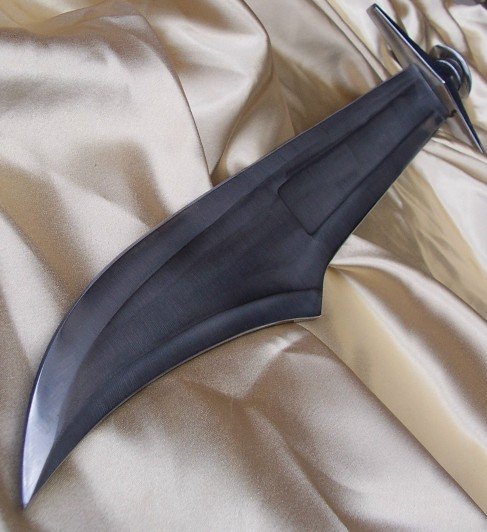 The blades finish is quite nice overall, some obvious grind marks - but they are quite fine and satiny. My only real criticism is, as with the other Valiant Armoury Philippine line is that the sword has a secondary bevelled edge that is not particularly sharp feeling. But we will see how, and if, this edge holds up with some cutting tests presently.

Now so far, the medieval Falchion has an Orcish Scabbard, tip and overall large and imposing design. But it is in the handling where the fantasy Ogre or Orc element comes into play. To use it properly, you would have to be as strong as one!

Weighing in at a WHOPPING 4lbs 2.5oz on my scales, though with a blade only 22" long, it is obvious that this sword is almost 1 and 1/2 lbs heavier than its historical equivalents. While the balance point is about right for a sword of this design, at around 4" from the cross guard, the overall weight throws the whole thing off.

The biggest problem is that to be able to use it to its maximum potential, it needs to either be used by someone immensely strong and swung in a large arc to achieve maximum velocity (or preferably both). But recovery time is practically non-existent - its an all or nothing kind of blade. Hence, it's the perfect Orc weapon...

Combine the immense weight, difficult handling and a secondary bevel on the edge and I had my doubts about the Valiant Armoury medieval Falchion.

I knew straight off the mark that the weight and thickness would make it extremely hard, if not impossible, to do much with your standard light cutting targets.

As expected, this sword didn't do so well on light targets

Sure, it could cut milk jugs ok. But the harder skin of a water filled soda bottle proved too much, with the weight kicking in and simply knocking the targets away with little more than a surface cut or the sheer force popping the lid of the bottle off rather than into the wall of the bottle.

Pool noodles were, pardon the pun, also something of a flop. The edge was sharp enough to cut them, but when in action the weight simply drove the lighter targets away.

These results were disappointing, but largely as I imagined how they would go. I had a feeling that the medieval Falchion would only come alive with extremely heavy targets and would act something like a giant machete.

I have attempted cuts of tatami with overly heavy swords before, and never with a good result. In all cases, the weight of the blade and the relatively low speeds push the mat aside before the edge gets a chance to bite. But here I got a pleasant surprise.

A much different outcome on Tatami than expected... And Axe like cutting on the woodblock.

As you can see from the video, the Medieval Falchion actually handled the tatami with surprising ease! The first cut was overpowered, expecting resistance and relying on force - but the resistance wasn't there. The second cut pretty much let the blade do all the work.

After cutting a mat on the woodblock, and knowing all along that this thing was a skull splitter, a couple of solid strikes into the block saw it bite very deeply indeed.

From all of these results, you can see now while I call the medieval Falchion an 'Orc' sword. It only works on heavier targets, and on a fantasy battlefield, would be the kind of thing used to chop of arms and legs and split shields and skulls alike.

It isn't at all historically accurate. But it is indeed quite a bit of fun...

As you know by now, I think of the Valiant Armoury medieval Falchion as an Orc Sword: it's mean looking, immensely heavy and good at cutting heavy targets.

Compared to a historical Falchion, it handles horribly and relies and pure brute strength and force. It more of a sword shaped Axe than any historical medieval Falchion ever was.

But despite all of this, or maybe because of it, I'm actually quite fond of this piece.

Not to mention the intimidation factor, especially in the hands on an Orc, would have most people running for the hills!