Meteoric Swords: the very name conjures up fantastic imagery and it is no wonder that they are and have been the object of such fascination over the centuries. 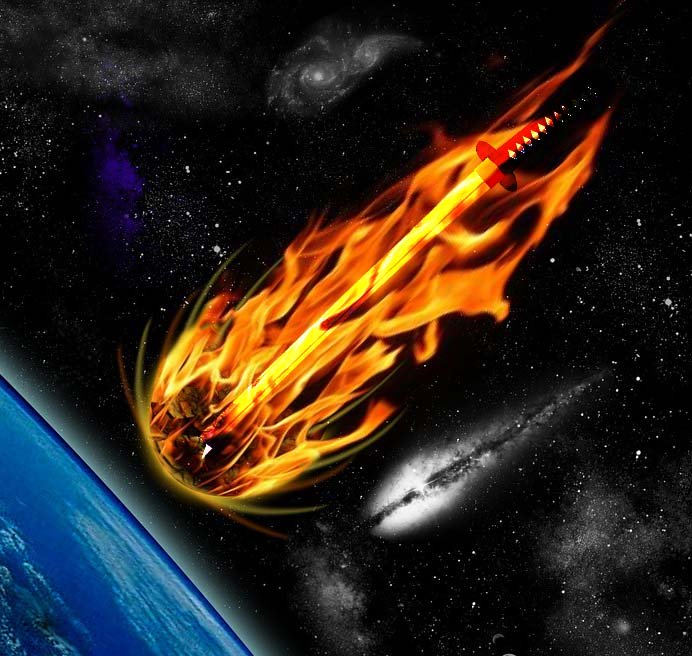 While rare, they ARE real - but there is as might be expected much hype and BS surrounding them. I won't name names, or single people out here, but there was a series of listings on eBay from a seller claiming to offer meteoric swords made from Tamahagane for around $5,555 (and 55 cents) a pop a limited run of only 77 pieces..

But it got worse..

While the listing was confused and had several impossible claims (such as the sword was folded until it had 1,000,000 layers - which is mathematically impossible but also would ruin the steel and make it nice and crumbly) this seller even claimed that the blades were 'forged during an eclipse' (that's fast work! They only have around 8 mins to complete it - and have to wait decades in between forging.. Guess they had a team of 5,555 master smiths in a line all ready to go when the eclipse kicked off)..

And here is the kicker, each sword came with 'a 13 metal Tibetan bell to energetically clean the Katana each time the Katana box is opened & closed.'

Very handy..Who needs a cleaning kit when you have a magic bell, right?

You may laugh (I certainly did at first, more in disbelief than anything else), but the sad thing is, this seller SOLD some of these swords to unsuspecting buyers and has 3 times the number of followers as SBG on Facebook.!

So sadly it seems, there is a sucker born every minute..(oh, and they had a strict no returns/no refunds policy too.. Just in case you wised up after you bought the thing)..

It is not the first listing for meteoric swords to appear like this. And unless the word gets out about this article, it won't be the last time either..

Our eBay friend introduces his sword with the following: "In ancient times, blades that were forged from meteors were considered to be Magic Swords, yet this katana is not only that as well, but is truly legendary"

Ah, that explains the folding, its a magic sword!

Naturally, the more things change, the more they stay the same, and it was true that many cultures considered meteoric iron a gift from the gods, especially in the early bronze age period.

The earliest historical example of a Meteoric blade is the dagger found in the tomb of Tutankhamun - which was found in 1925 and dates back over 3000 years.

Further research suggested that the Egyptians, who were not able to make iron or steel themselves, placed a high value on meteoric iron and while this may not be of Egyptian manufacture (it is theorized it was made by the Hittites) it was clearly a treasure of some importance.

Fast forward a couple of thousand years or so to 1000 B.C. and there is evidence of meteoric swords, knives, axes and more - but unlike the Egyptians, - the techniques have been quietly passed down through the generations, and a handful of smiths are still able to make them the same way they did 3000 years ago.

Indeed, going back through archeological records and historical records, it would seem almost all cultures that worked iron, made some blade from meteoric ore. From the Mughal Emperor Jahangir, who 400 years ago actually saw the meteorite fall from the sky and found it to have his blade made, to Tsar Alexander receiving one as a gift in the 19th century, while they certainly where not common, they were quite real and not a myth as some people dismissively think.

But apart from the 'coolness' factor, what practical benefits, if any - are there to making meteoric swords as opposed to normal iron?

Just How Good Were They? 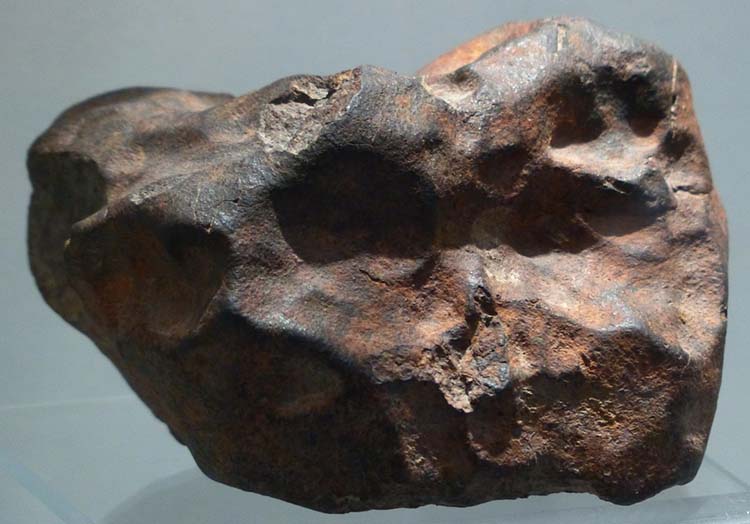 From a purely practical point of view, Meteoric iron is better than bronze and better than early iron and steel, but quite inferior to modern crucible steel. It was great in the bronze age, as a good rock would have decent ready made iron in it (and it is argued, may have actually inspired early civilizations to try and make iron themselves). And it can be fairly tough, when properly made it can produce a sword that can hold its own against a modern steel blade.

But it is definitely not some kind of super steel..

Meteors also vary in the amount of iron content - many are just rock, with 6% or less iron-nickel alloy content. Others are much purer, and quality of the raw materials will make or break the quality of the blade.

In the case of the Egyptian dagger, the high nickel content of the blade effectively made it like stainless steel and 3000 years later, it was still rust free and almost in pristine condition. But other blades, made from less homogeneous meteors will rust QUICKER than regular steel, forming cracks and inclusions..

So some MAY be rust resistant, but others not so much..

Visually, however, when laminated with regular steel the high nickel content makes for some visually stunning patterns (and for this reason was used to decorate Kris swords and knives in Malaysia and Indonesia).

So in a nutshell, meteoric swords are better than late bronze and early iron in terms of strength and durability, but cannot compare to modern steel, even the most basic 1045 carbon steel will be stronger. Meteoric swords have no special properties (other than in some cases rust resistance), they were not harder, not stronger and nort sharper - just very unique, rare, and of course, very cool!

In the last decade or so, there has been something of a revival and trend towards making meteoric swords.

Indeed, famous modern day Japanese swordsmith, Yoshindo Yoshiwara, forged a Katana (The Sword of Heaven) from a chunk of the 450 million year old Gibeon meteorite which is on display in the Chiba Institute of technology, Tokyo.

Several other contemporary sword makers have also tried their hand at making meteoric swords - another well known example was inspired by the Meteoric swords in the movie 'the Last Airbender'.

Indeed, even Fantasy author Terry Pratchett forged one from meteorites with ancient metal making expert and friend Jake Keen back in 2010.

So how much would it cost to have a decent meteoric sword made? Is it possible?

Let's take a behind the scenes look at a well known sword company that spent a couple of years to see if THEY could have one made..

Chris Scoggin from Ronin Katana had dreamed of making a meteoric sword for many years.

His first attempt was not so successful - he purchased a certified 28 pound rock and hand carried it to China a few years ago. The end result, almost no usable material and the material that was usable, cracked.

But not to be discouraged, and determined to make this world, he tried again.. Here is some of the raw meteoric iron. 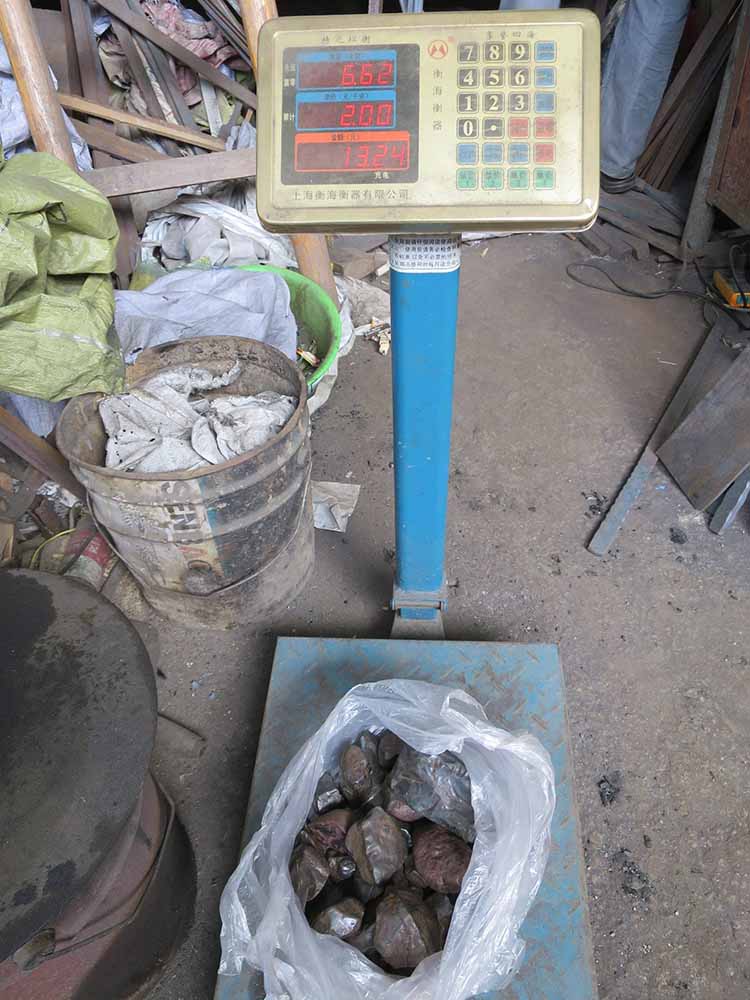 The meteoric iron was broken up and smashed into chunks, then pouring the contents into stainless steel crucibles, and melting the stones. 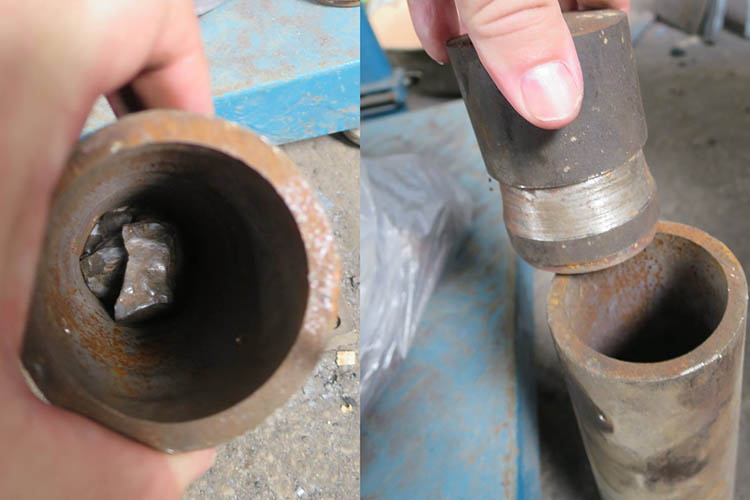 It took a team of three certified master smiths to turn the raw materials into a work of art worthy of being housed in a museum. Indeed, the head smith is so highly ranked that his swords need a special export permit as he is capable of making swords of such quality that they are considered national treasures.

Naturally, a blade like this needed the best sword furniture possible - and no expense was spared..

Here are the 3 master smiths with the finished sword. 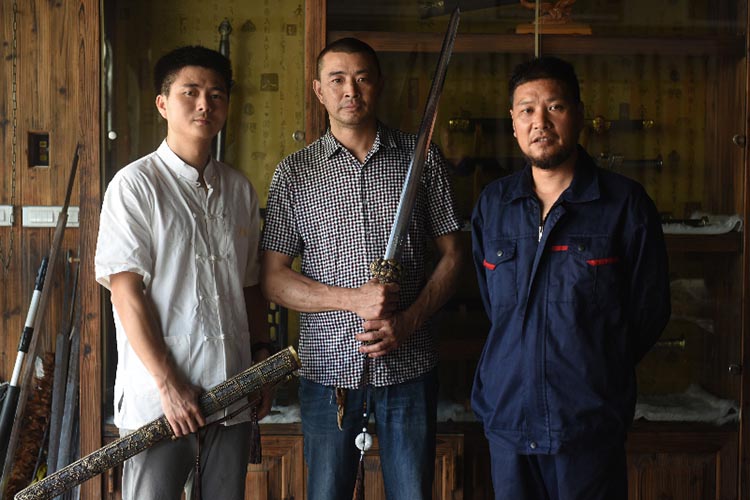 And below, a gallery of the blade and fittings up close (click on any images to open the gallery pics full size). 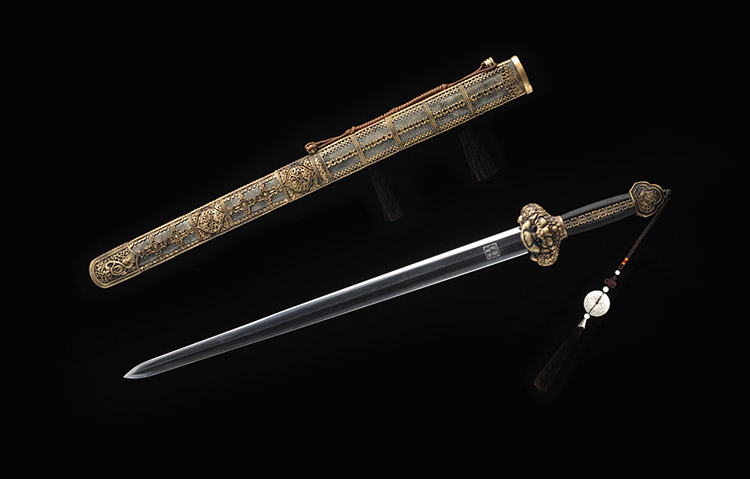 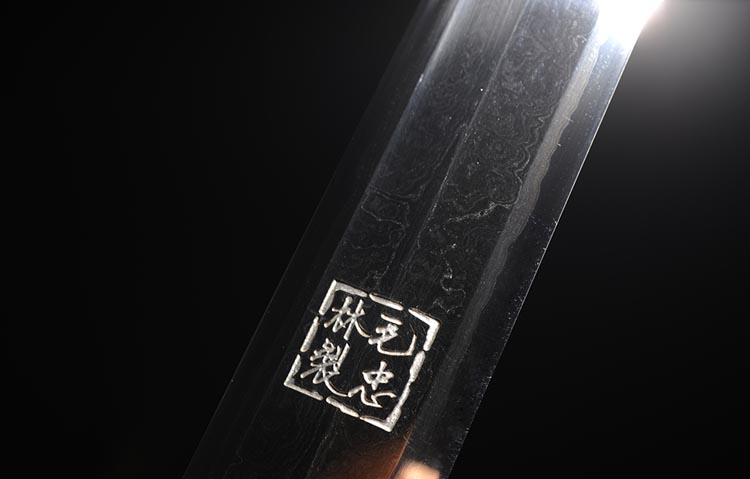 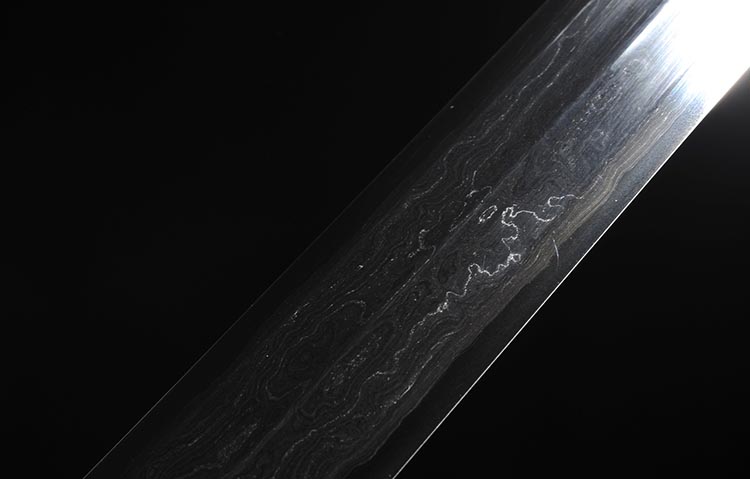 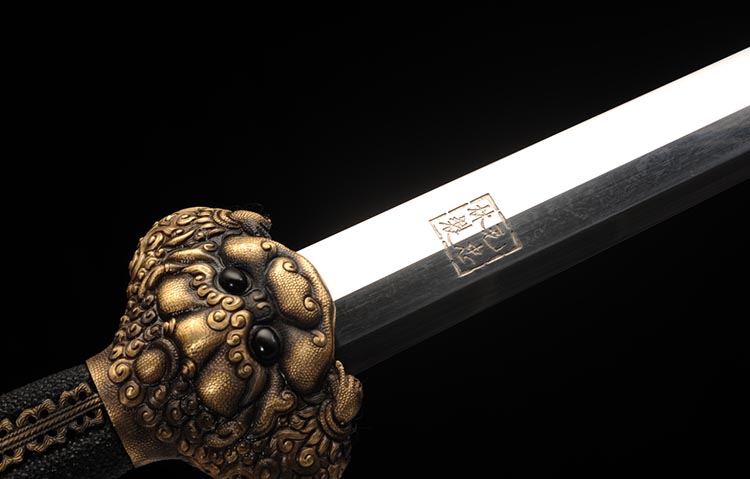 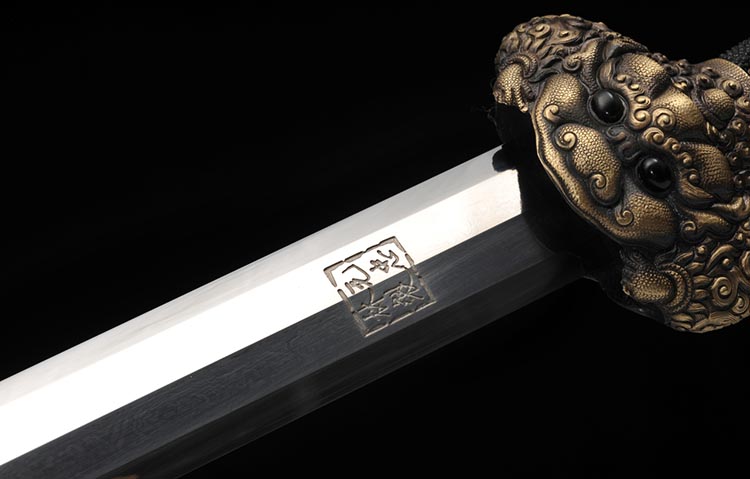 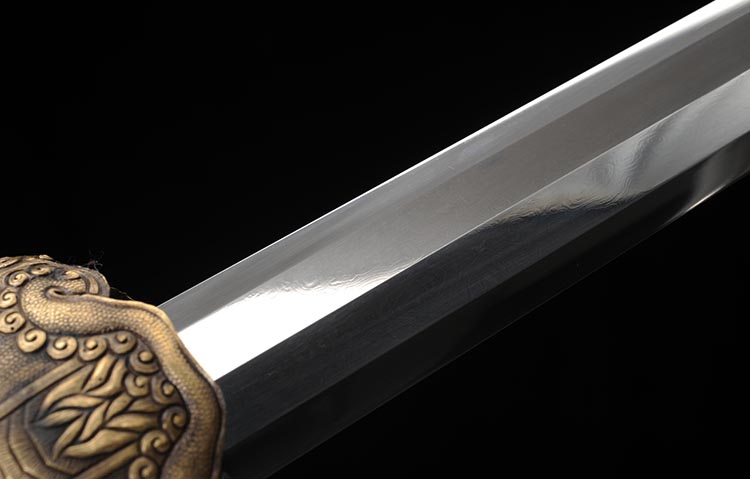 The price tag for this beauty? $10,500, the most expensive sword Ronin has ever produced to date..

You can check it out on their site here

Will they make more? They haven't decided yet.. As you can see, it takes a lot of work, is hard to export - and is very risky (as the first attempt showed). When you take all of this into account, the $10K price tag is actually pretty low..

But at least, it gives you a benchmark - and shows you that no-one is churning out genuine meteoric swords somewhere. It's a very special project..

So if you see other sellers claiming to offer meteoric swords at a lower price point, be VERY careful and ask a LOT of questions. It could be a bargain, but is probably more likely to be a very expensive lesson (and no, this sword does not come with a 13 metal Tibetan bell)..

At the end of the day, swords made from meteorites do indeed have historical precedent, and may have been the inspiration to start smelting iron in the first place.

In the real world, these swords are not magical, and not some kind of supersteel. But they are extremely rare, hard to make and not something you are likely to stumble upon for sale on eBay.

But out of all the possible ways to make a sword, it is arguably the coolest of them all..