Used primarily for thrusting but with a wide enough blade to still make effective cuts, the Type XVIa has a relatively wide blade terminating in a very serviceable tip, two handed grip and 1/3rd length fuller. Appeared and disappeared in the early 14th century and could and often did use any type of cross guard from the period with no specific style being particularly prominent. Versatile against armored and lightly armored opponents, yet relatively rare. 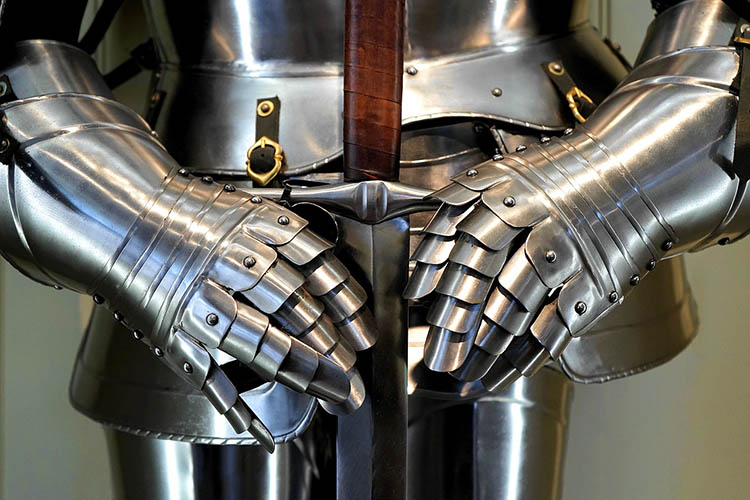 Against Armor like this, good thrusting power is definitely needed

While the Oakeshott Type XVIa could be used for cutting, and would deliver fight ending injuries to a lightly armored opponent, it is clear from its blade geometry that this is a sword designed primarily for the thrust.

This was of course in response to the increased use of plate armor on the battlefield, be it as a full suit of armor or plates under cured leather armor - and its primary use was to seek out and dig into the weak points to pierce the flesh beneath.

With a unique hexagonal profile - a four sided flattened diamond geometry - with two hands behind it, it was said to be powerful enough to actually penetrate plate armor with a direct hit, and would have made any medieval knight facing one feel rather nervous..

Quite a few manufacturers have tried their hands at making serviceable replicas of the Oakeshott Type XVIa.

One of the earliest budget entries was the 'Towton' sword by Windlass Steelcrafts that had a lot of promise and looked stunning, but was too whippy and flexible to deliver the thrust that this type of sword was specialized in.

Thankfully, there are several current battle ready versions of a Type XVIa available to the sword collector..

Though even the high end ones tend to make the fuller a little longer than historical versions. 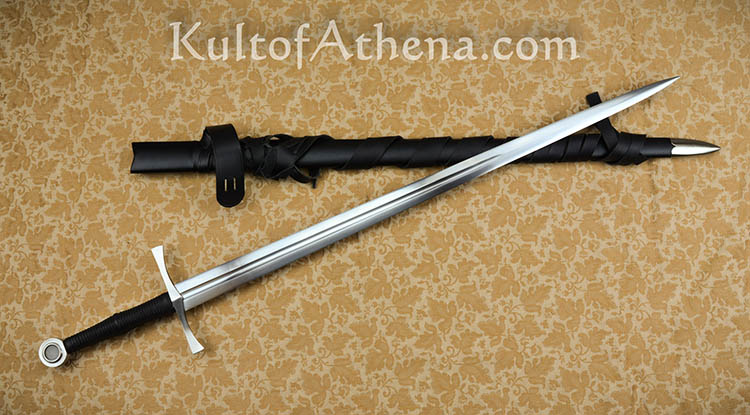 Ronin Katana's entry level Model #2 Euro Sword is a very sturdy example of a Type XVIa - at least in general shape and profile, though like with most entry level swords, the edge is more of a diamond profile than hexagonal, but it still qualifies as a XVIa.

With an acutely tapering blade profile, Dynasty Forge recreates the Type XVIa in much the same way as does Ronin, and with the same errors in terms of a longer than usual fuller and diamond profile tip.

The semi-custom XVIa by Lockwood Swords, hand made in the USA and available with custom color options for the leather hilt, captures the style quite effectively, but again - the fuller is too long and the edge profile actually more lenticular than diamond or hexagonal in cross section. But after all is said and done, it is the best of the three (which of course, considering the price, should really not be a surprise).

MyArmory has an excellent in depth article on Type XVI swords - and the various sub-types including XVIa swords here which explains their history and lists some high end reproductions and images of actual antiques.