Appearing in the 15th century and used from around 1410 to 1510, Type XVIIIa represents a later period Knightly Longsword that hearkened back to earlier, more versatile sword types as the trend towards heavy armors on the battlefield stared to reverse due to increased use of missile weapons. The long, relatively slender blades (usually with a partial fuller) combined the best of the cut without losing the ability to deal an armor piercing thrust when necessary. Could be mounted with any type of pommel or cross guard from the period, though types 1-3 were favored. 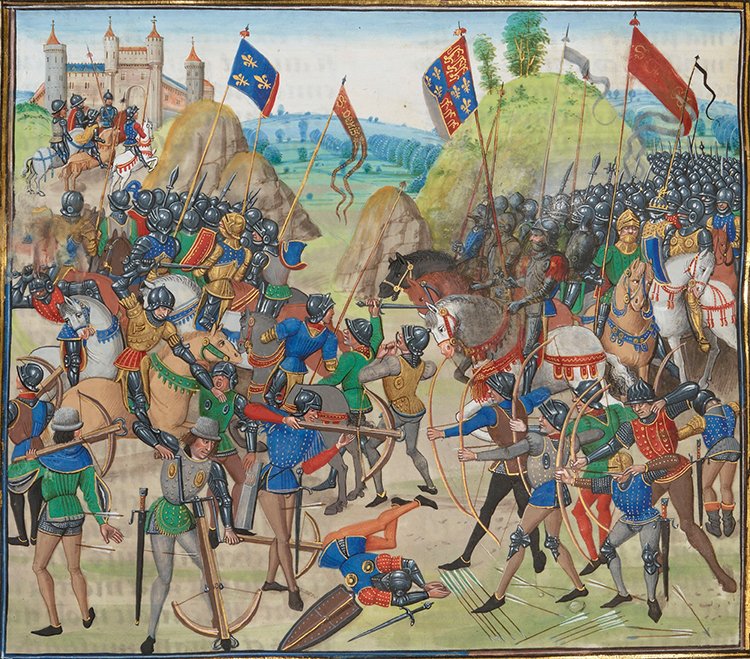 The Battle of Crecy in the mid 14th century

The Oakeshott Type XVIIIa was a very popular sword because by the 15th century, the battlefield required a much more versatile weapon.

Thrusting swords were still needed to deal with plate armor, which by this period was essentially invulnerable to cuts.

But the armor of the average infantry man was becoming more mobile and less armored as the use of longbows, crossbows and other missile weapons began to dominate the battlefield.

With a somewhat slender and even graceful looking blade that swells slightly at the base and tapers to a strong point, type XVIIIa swords could have almost any type of cross guard or pommel and so, apart from the blade, are impossible to identify by fittings alone as are some earlier era swords, mixing and matching parts like a diner at a smorgasbord.

For a representative example, the most famous of all the Type XVIIIa swords was the so called Albrecht sword which despite being over 500 years old is in pristine condition and was believed to have been owned Albrecht II of Austria.

It was a popular sword in the 14th and 15th centuries, and remains a popular one with sword manufacturers and collectors alike even to this day.

Indeed, there are quite a few production swords available to the enthusiast so we have presented below 3 battle ready replicas that we feel offer the best value for money to historical accuracy ratios. 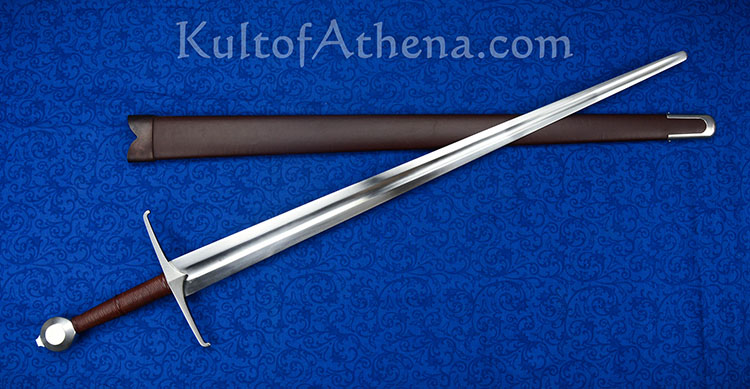 Based on the Type XVIIIa shown in Records of the Medieval Sword, this blunt sparring sword by Kingston Arms is a faithful recreation - and as tough as old nails to boot, with a blade made from 9260 Spring Steel and the patented 'King Peen' assembly creating a sword that can take one serious beating - all for under $200..

Almost an exact replica of the original, even down to the Passau "Running Wolf" markings - the only real complaint about this Hanwei Forge classic is the pommel is just a little bigger than the original. But for under $300 - I think it is something most collectors can easily get used to..

While there are quite a few other entry level and mid level swords of varying degrees of historical accuracy and quality, for those for whom only the best and most accurate will do - there is the Schloss Erbach. Based on the historical original as closely as possible, it may be familiar to students of HEMA as it was depicted in the fight manuals of Talhoffer.