The rapier sword was a civilian and dueling weapon of choice from the 16th century onwards - designed primarily to deliver a deadly thrust through the vital organs.

The  Torino sword by the Hanwei Forge, which we will review here, is ostensibly a replica of an Italian rapier sword that you might find in the 17th century. But how historically accurate is it, how well made, and most importantly - how well, and how deeply, does it pierce it's targets?

Let's take a look and try to find out.

When the Torino first arrived I half thought that there had been some kind of mistake.

One look at the strangely shaped Styrofoam case suggested that I might have accidently been sent a lute, guitar or something of the sort (take a look at the pic below to see what I mean). 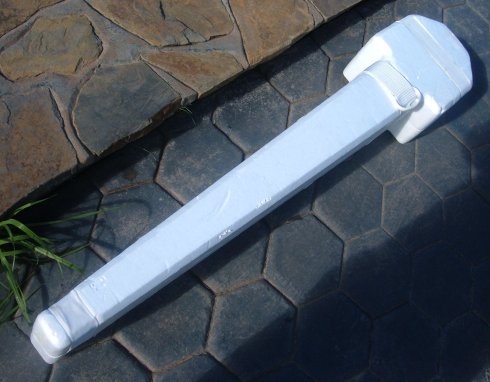 Certainly not what I expected a rapier sword to be packed in...

Curious, and slightly confused, I opened the packing, bound with several thick elastic straps, and to my relief found that this was no guitar (as I have no idea how to play one, though if it was a nice one I guess I would have to learn!). 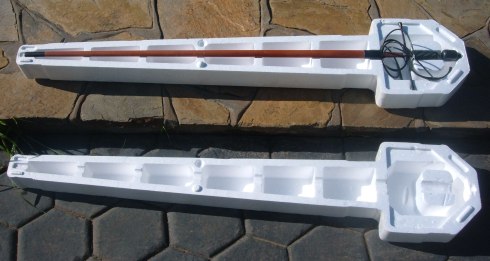 While I may joke about it, the Styrofoam inner layer is actually quite ingenious when you consider how intricate the handguard of this sword really is - and does a fantastic job of padding it against even the most overzealous UPS delivery driver. 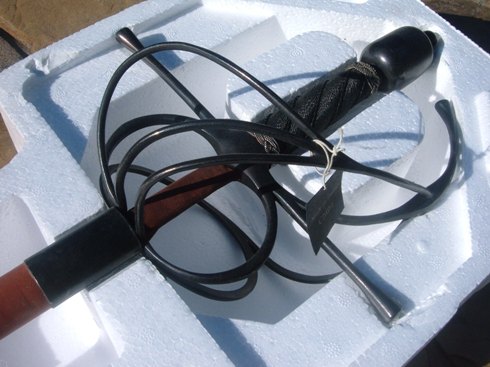 Since you already have a glimpse of the distinctive crossguard of this rapier sword, I might as well start the review with the hilt. 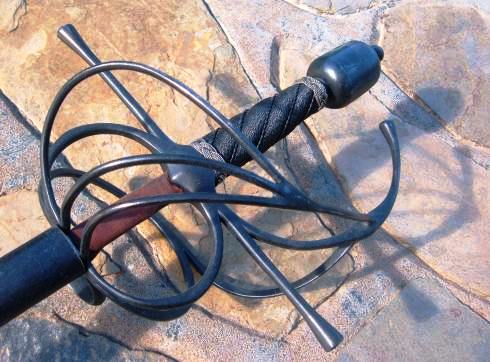 Made of stainless steel with a black 'patina' to simulate the passing of many a year, the crossguard of this rapier sword is both ornate and with a delicate appearance and yet surprisingly strong (I tried bending the weakest looking points with my hand, but could barely move them).

Due to its intricate looping design, it is a little hard to describe - with the main crossguard sprouting several quillions, one of which curves back towards the pommel and another which encircles up above the (brown suede covered) ricasso - and then forms a kind of basket, with three quillions meeting near the pommel - and on the otherside coming back to form an elliptical circle.

Hmm, probably best to let another picture do the talking! 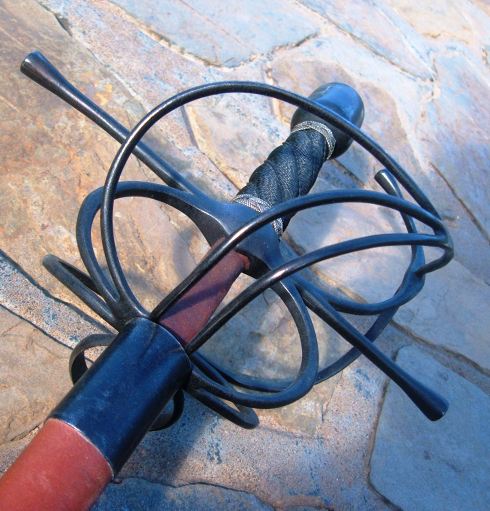 As you can see, it is kind of hard to describe the handguard. But to point out a few other parts of the hilt assembly, which as I noted is very solidly constructed - the grip itself is really nicely done, with a black wire wrap that is unobtrusive and comfortable in the hand, topped off with two turkshead knots. 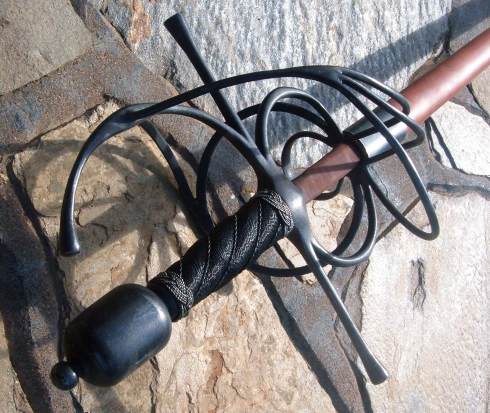 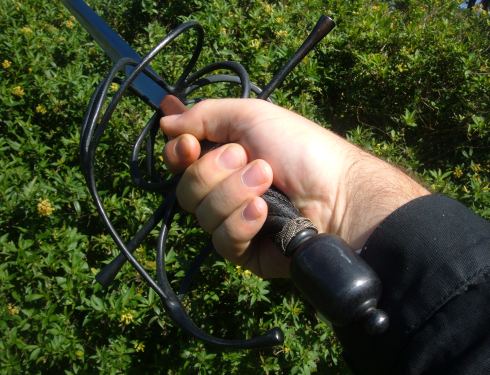 The pommel feels quite substantial too, also made from antiqued stainless steel - which brings me to another point, the 'antiquing' only looks realistic in certain lighting conditions (none of which I could capture with my camera) - otherwise, it just looks - well, black.

But despite this, it still manages to pull it off, and personally I much prefer this version than its all too shiny un-antiqued twin (this rapier sword is available in both a 'new' and 'antiqued' version).

Not much needs to be said here. The scabbard is wood core, wrapped in brown leather and capped at both ends with the same blackened stainless steel as used in the hilt. 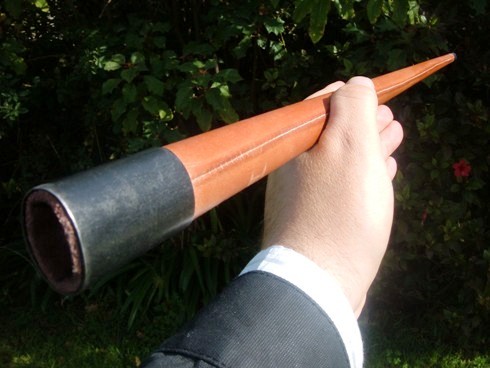 It is hardly impressive, but it does the job of housing the blade... 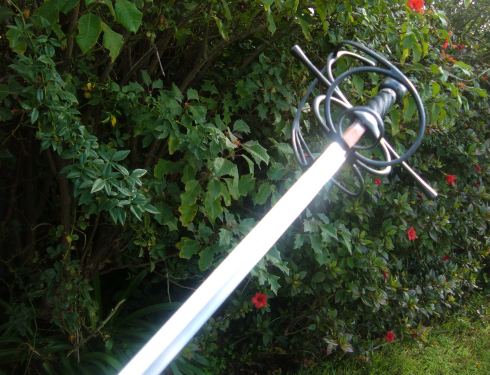 Of course, while the hilt may be very ornate and attractive (and the scabbard right there at the other end of the spectrum) - if the blade isnt up to scratch it doesn't matter very much...

Fortunately, it most certainly is!

The steel is excellent quality, beautifully tempered and springy and seems quite suitable for delivering a very effective thrust without buckling (something that I confirmed in my tests to come).

And weighing in at 2lbs 4oz, with a balance point of only 1" from the (heavy) crossguard assembly that counterbalances it, it is extremely fast in the hand, feeling almost weightless.

A NOTE ON HISTORICAL ACCURACY 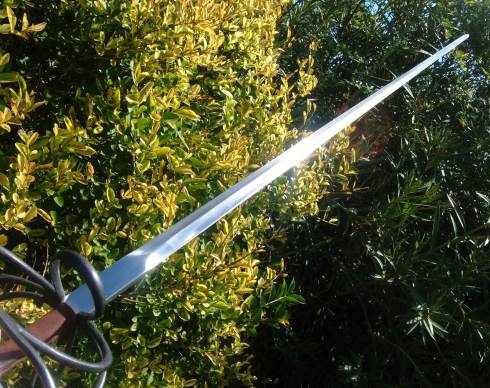 I must admit to having never handled an original antique rapier sword, so I do not have anything to compare it to.

John Clements from the ARMA claims to have handled numerous antique rapiers in his time and claims that they 'felt absolutely weightless, lightning fast and agile' - but others such as Bill Grandy from MyArmoury claim that rapiers of the 17th century were actually much heavier and slower than what most people think.

With such conflicting information, and without having handled one myself, I am going to sit this one out and not make any claims to the historical accuracy of this blade but rather to take it on its own merits.

It was a little disappointing to me that the edge of the blade near the tip was unsharpened, though the tip itself was ready to go right out of the box. I considered sharpening it up quickly with an accusharp, but as you can see from the pictures, the central ridge and hollow ground diamond cross section did not allow me to use this handy little tool in this case. 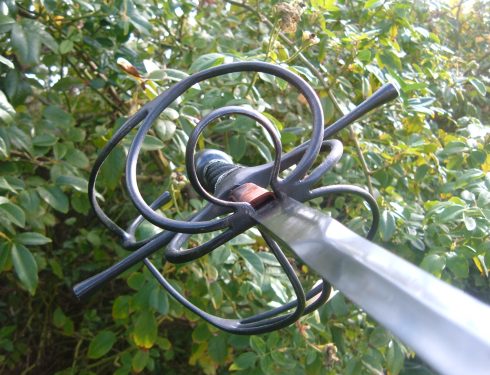 Pressed for time, I sharpened it up just a little more near the tip so I could add in the occasional cut (as the rapier sword was not exclusively a thrusting blade, but was of course capable of causing nasty cuts that would distract an opponent long enough for a decisive thrust).

Time to try it out.

Now it should be obvious from the video that follows that I am no fencer. But I did have a lot of fun testing out this rapier sword...

Naturally, being unsharpened and not really much of a cutter anyway, I didnt do a lot in terms of cutting. What I really wanted to know was how well it handled and how well it could penetrate a variety of targets, because the geometry of the blade seemed like it was both flexible, yet stiff enough to seriously penetrate into a target without too much effort.

So I selected three suitable targets - the first being water filled soda bottles, which the blade buried itself into almost half the length of the blade, the second, was an aluminum can filled with water, with similar results (and I must say, the sound it makes when it strikes such a target is very rewarding) - and the third test for the Torino rapier sword was a tatami mat.

And after these tests I came away with some serious respect for this replica rapier sword.

As you can see, you can use it to weaken an opponent with fast jabs before coming in for a final and decisive thrust that would most likely pop right out the otherside of them. And the diamond cross section of the blade means that the puncture wound is much wider and more lethal than what may occur on a thinner blade, as aptly demonstrated on the tatami mat below. 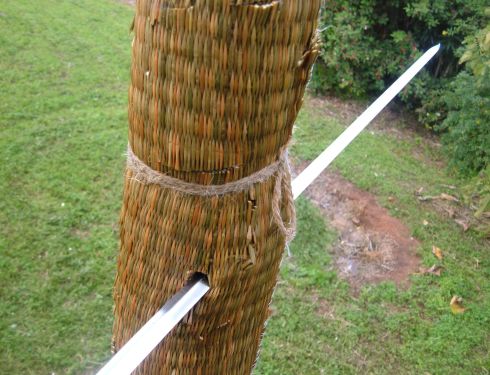 Considering that these mats are supposed to simulate the density of the flesh in a human arm, I really wouldn't want the blade of this rapier sword anywhere near my vital organs, that is for sure!

Attractive, fast and well balanced and economical - I really cannot seriously fault this particular piece (and dont want to get embroiled trying to classify it historically, considering the controversy and the fact that I have never handled an antique rapier myself)...

But the main thing is, I can get some REAL value for money out of a tatami mat for once. ;-)

Like almost all the Renaissance swords we are looking at, this blade has gone the way of the do-do..

However, bearing the good and bad points of this blade in mind, for anyone looking for something similar we strongly suggest you check out the range of Renaissance swords available HERE at Kult of Athena

I hope this review of the Torino Rapier sword has been helpful. To return to Renaissance Swords from Hanwei's Torino Rapier Sword, click here