Sadly the Praetorian sword reviewed here has been discontinued, but the review has been preserved for informational purposes.

The Praetorian was an inexpensive Roman Gladius made by Valiant Armoury during the early days when Sonny Suttles took over this business and began revamping their Philippine made line.

While this sword has long been discontinued, it shows how even from the beginning Sonny's influence radically transformed Valiant - from a has been to a go to sword company, and thus has been preserved in its original format for informational purposes.

The Praetorian is not so much a slavish copy of a historical Roman Gladius, but strikes me more as a modern tribute to it. An interpretative piece if you will...

And indeed, it does capture the spirit  if not the exact form  remarkably well.

As with all other Philippine made swords that I have seen, the Praetorian Roman Gladius came tightly wrapped in a layer of plastic shrink wrap and below that, grease, both of which are no easy task to remove. But as soon as you catch a glimpse of the blade inside, it is clear that the effort to do so is well worth it.

There can be little argument that this is one very attractive looking sword. 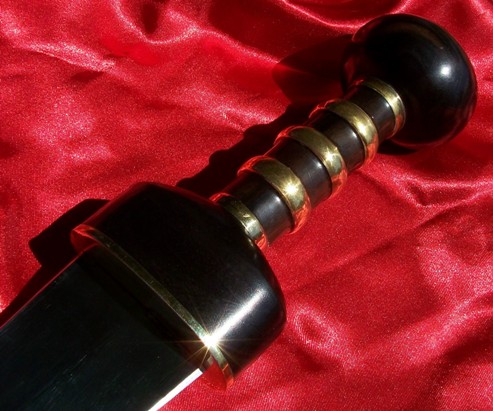 The fittings are especially eye catching, the handle featuring a tiger stripe of dark Macassar ebony hardwood and polished brass. This isnt particularly historically accurate (the average Roman Gladius had a plain ribbed handle) - but it looks even better in person than any pics of it can convey, the brass always glinting and catching the light as you walk past it.

The Macassar ebony hardwood itself is of very high quality. Deeply grained, again  Romans didnt use this particular wood in their swords, but if they had seen this  perhaps they might have...! 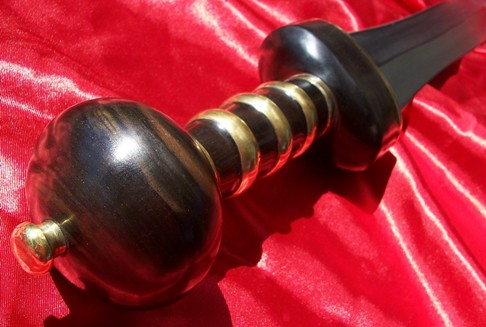 The pommel is especially beautiful, very smooth  very even and with some great patterning in the wood. It all works very well.

Everything is very tightly assembled  no rattling or looseness of any type.

The tang, which you can make out as it enters the top of the brass plated guard, seems adequately large at this point as is threaded with a pommel cap at the other end.

Overall, while it may never have actually existed in this exact form  it captures of the essence of its namesake perfectly.

On the other hand, the scabbard is something of an afterthought and certainly isnt anything close to what a historical Roman Gladius would have been housed in.

A simple stitched black leather job with a brown triangular patch at the mouth, I found it a little too tight at first, though it does stretch with usage. It is practical enough, in that it has a loop where it can be used for attachment to a belt, but being leather  it is not recommended to store the blade and completely contemporary in style.

I have a mixed reaction to the blade of this Roman Gladius, and while it incorporates several great features, there is one in particular that I feel lets it down.

In terms of shape, it is quite an accurate replica of an authentic Roman Gladius. The wasp waisted 20 blade is subtle, with a variation of around ¼ of an inch before terminating to an acute point. Being hand forged, the central ridge wanders a little here and there, and there are obvious grind marks - but these are only visible on close inspection and from certain angles.

Overall, the blade of this sword is extremely attractive.

With enough flex to make it resilient, but not so much that it cannot do its primary task of a definitive fight ending thrust, the Praetorian Roman Gladius seems to be very nicely heat treated and well made.

The ONLY criticism I can find with it is that it has a secondary bevel  in other words, and angular edge like you find on a knife.

Dont get me wrong  it seems sharp enough for the job, though it sure isnt paper cutting sharp. And there is a review on the SBG Sword Forum (which I will get to shortly) that suggests that some of them are really quite blunt. But I would have liked to have seen a natural single bevel rather than a secondary one.

We will see how well this Roman Gladius cuts and thrusts out of the box. But for now, lets take a look at how it handles.

This is one area that I find that this sword performs extremely well in, which when you look at the raw stats, is a little surprising...

Just holding it your hand, you would have no idea that this sword weighs 2lbs 9oz. It may have something to do with the fact that with the point of balance being set so far back at 2 from the guard, the swords weight seems to be concentrated mostly in the handle.

The actual blade itself feels like it is barely even there. This allows for some amazingly fast handling, and everyone who has actually used on of these has commented the same thing. It handles in real life considerably better than what you would think just looking at the raw stats.

This led me to worry a little that with the weight concentrated back towards the handle and with a secondary bevel, it may lack somewhat in the cutting department  as the reality is that historically, the Roman Gladius was primarily a thrusting sword, but was also often used to cut when the opportunity arose.

Lets see how it performed...

Despite my concerns that the blade may lack presence, it was apparent from dry handling that it was fast enough to reach an optimized cutting velocity  and before attempting the tests, I was confident that it would handle light targets without any problems.

As such, I prepared a series of various sized water filled plastic milk jugs and soda bottles and put it to the test...

The slightest touch and it cuts...

The thrusts were especially easy, requiring no effort and was very satisfying. And each cut went through cleanly, even cutting cleanly through the hardened cap area of a soda bottle without so much as breaking a sweat.

Not only did it not disappoint, but I found this little sword to be an immensely enjoyable bottle cutter.

However, cutting water filled bottles is one thing. To really know if this sword was properly balanced for optimal cutting, I had to test for two more qualities. Sharpness and speed can be measured by cutting a pool noodle  those long, springy bits of foam that, if the sword is too heavy or not sharp enough, will simply cause them to flop out of the way.

And the ultimate test of any good cutter, soaked Tatami mats.

A really good cutter all round...

The pool noodle didnt stand a chance. I ticked this Roman Gladius off for optimised speed and cutting edge. And its cutting ability was confirmed on the tatami. 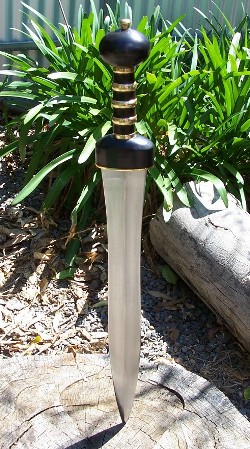 It was an all round agile, fast and good cutter.

But as we solve one question, another one arises: Durability.

Now to be honest, when you look at this sword and hold it in your hands, it doesnt give you the same sense as the take on anything feeling you get from the Generation 2 Roman Gladius. And even though the stats are similar, the Gen2 has about 3oz more weight that is distributed more in the blade than towards the hilt.

And as such, I did not feel that extreme durability tests were even the right thing to do with such a sword, as it is clearly not its intended purpose. I have little doubt that if it was taken into battle some 2000 years ago, it would have performed much better than the historical originals  after all, the steel the Filipino smiths use is so much better than anything ever available to a Roman sword smith.

But if you see the review on the SBG Sword Forum, a rather brutal test performed on this blade made it look like it was left wanting.

But was it really?

The test saw the hapless Praetorian being thrust TWICE into 16 gage armor plate! Naturally, the tip was bent as a result. But this doesnt strike me as a failure... It strikes me rather as the wrong tool for the job...

If the same thing had happened to the Gen 2 blade, I might have been surprised. But it isnt what this sword was designed for. This may sound funny coming from someone who has been known to use swords to hit 55 gallon drums, tree trunks and metal poles...

But youll note that such tests are only performed on swords that I believe can handle it, and to test at their upper limits to see if their famed or suspected durability is indeed true. But to do it on all cases would become counter productive and suggest that durability is the only thing that matters. Yet for swords, it only really needs to be strong enough to do the task it was intended for...

However, the seed of doubt had been planted. Perhaps, just perhaps  this swords tip was improperly heat treated. So to know first hand, I had to push it a little with what I believed was a more realistic test. If it failed this, then indeed it was a dud.

The target was a Galvanized steel garbage tin resting against a tree.

Testing the tips durability on a galvanized steel lid

Several thrusts were performed, with the tip piercing and remaining in perfect shape. You can also see an image as to where I stuck it into the woodblock to photograph the blade (which was actually done before these tests)  so there is little question in my mind that while it isnt a beast  it isn't supposed to be one either!

So there we have it.

This may not have been the most historically accurate replica Roman Gladius even produced, but it was far from the worst  especially when compared to others within the same price range. As a collectors piece and a light to medium duty cutter, it performed its functions very well. In terms of handling, it was quite simply  exceptional.

A real shame that it is no longer available, if you bought one - hold on to it!