As the first official Ryujin Katana review on SBG was written by our sites editor and chief (yours truly) when we were evaluating if they were truly worthy of adding to the SBG Sword Store, it's natural to be skeptical of whether or not the Ryujin Katana review there is actually legitimate.

Of course, with the sites reputation on the line - we won't recommend crap. And despite the fact that several flaws were pointed out in said review, and one of the products in the line was rejected during the testing process.. Not to mention that all the testing was conducted in front of a very skeptical third party audience in Hong Kong who did not hold out high hopes for the line (but in the end were as pleasantly surprised as I was). At the end of the day, I am still reviewing a product that I am selling. And while I try to be as impartial as possible, it's natural to think that there may well be some bias, whether consciously or not..

So here's an impartial third party review by a SBG member and martial arts practitioner to compare to my review and see how it stacks up!

As an iaido practitioner and Japanese sword enthusiast, I wanted to buy a katana that met the following criteria:

Regarding the tsuka, I wasn’t picky about length and color, as I planned to modify it and re-wrap it to my own preference anyways. I wanted a sword that would be mine; that I could use for iai and tameshigiri, not one that I would sell in a year or two. So my priority was on the blade itself. 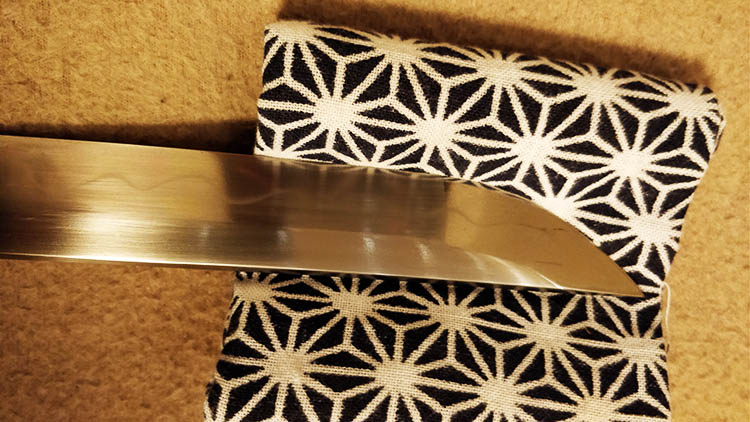 I purchased this sword full price at the SBG Sword Store in 2018.

I do consider myself to be experienced on the topic of Japanese sword history and appreciation. I’ve had the pleasure of being able to handle and closely examine numerous Japanese Nihonto during my stay in Japan this past winter. Also, I have studied numerous books and sources on the subject. However, I do not consider myself to be an expert on the topic. There are other members on this forum that may hold such a title, and I am not one of them. 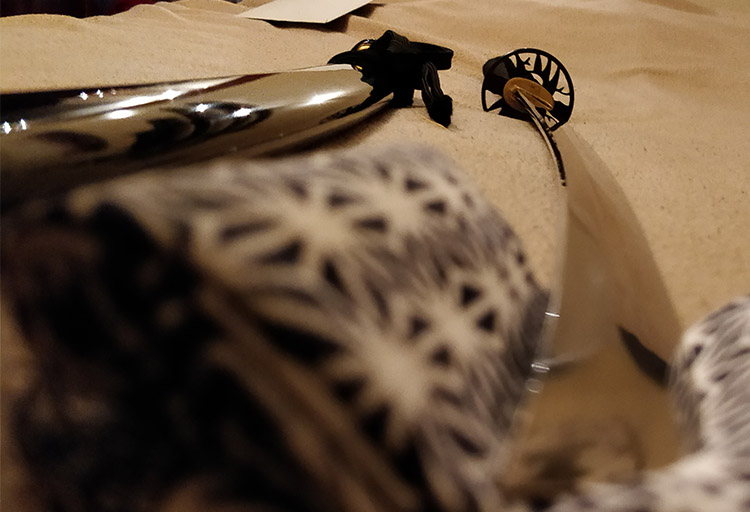 The sword came in a long cardboard box with Styrofoam slots in it to keep the sword safe, which it did! The sword itself came in a black cotton sword bag with RYUJIN embroidered onto it, very nice. The blade itself came wrapped in a thin layer of plastic and, under the plastic, was covered in a type of thick oil/grease; this is to keep the blade from rusting while being stored in the warehouse (I assume). It is easy to wipe off. However, I recommend oiling the blade properly afterwards. 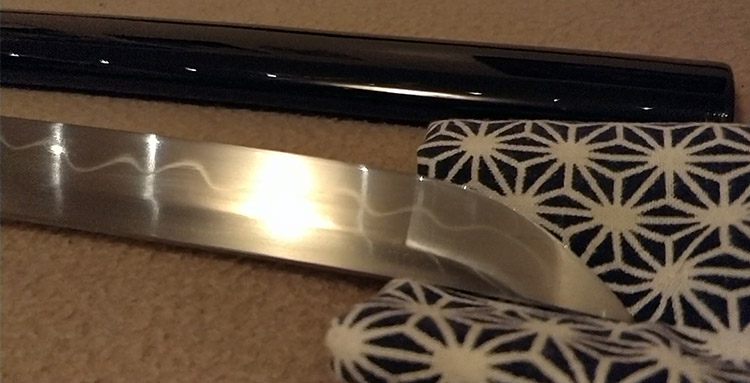 The blade is overall very nice and well made. It’s straight with no warps or bends, the shinogi line is crisp (not as crisp as some Nihonto that I’ve seen, but remember: Nihonto start at around $3000-$4000, while this sword sells for $279!). The Kissaki is nicely shaped, and the Yokote is cosmetic/counter polished, as opposed to geometric; however, I don’t feel as though this is an issue at all. It makes no difference in functionality, and visually, the counter polish looks good. I’ve had Katana with a geometric Yokote but with no effort into the counter polish (which should be there anyways, cosmetic or not), and this Cosmetic counter polish on the Ryujin katana looks better. I ordered the sword without Bohi, the reason for this choice is because when it comes to production katana, it's not uncommon for Bohi to be slightly uneven or have imperfections. I wanted a sword that I could 100% be proud of that has no imperfections, so simple is better; less chance for problems. The hamon is genuine and very nicely done, it is not what I would call a Midare Gunome hamon as specified in the Certificate, but more like Notare Gunome. Still very nice though.

Listed as 11”, but technically coming in at 11.5” because of the kashira, the tsuka was not bad. The shape was definitely very nice, as I enjoy what people tend to call a hourglass figure in the shape. The tsuka fit perfectly and was not rammed onto the Nakago (tang) resulting in any cracks. The only issue I have is that the tsukamaki(wrap) did not have any Hishigami, but again, this isn’t that big of an issue for me because I plan to shorten the tsuka to 10” and redo the wrap anyways, so I’ll add the Hishigami myself. Though some people may not like to do DIY work on their pieces, so keep that in mind. Aside from that, the fittings are nice, the kashira and fuchi are both brass, along with the menuki. There are two mekugi on the handle, which is a standard for non-Nihonto katana. The actual wrap and diamond shapes however were slightly uneven, with a little bit of wood peeking in on one or two of the diamonds.

*EDIT: The fuchi and kashira are, after a magnet test, confirmed to in fact be iron/steel! This is a big plus in my opinion, as I like to consider iron fittings to be superior to brass due to it's strength and weight (slightly heavier kashira could tip the balance more to the handle, which makes for an easier swing). 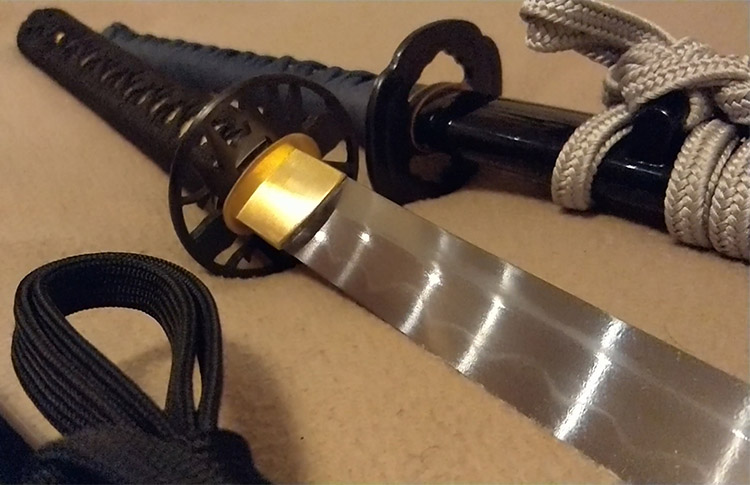 It is made of 1045 carbon steel. I personally like this Tsuba very much, I thought I wouldn’t, based on the photos, but I really came to like it when I saw it in person. It’s slightly smaller than my other tsuba on my other katana, but I think that’s a nice charm; as it reminds me of the Nihonto I’ve handled in Japan. 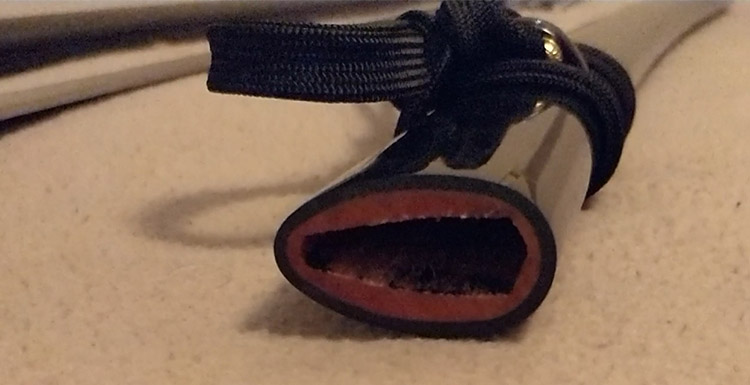 The Saya is nice, with no issues at all. It does not have buffalo horn fittings, but that isn’t too much of an issue for me. The fit of the sword in the saya is perfect, no rattling whatsoever. However, I may just be lucky, it happens to even the best of production swords. The only thing I wish was different in the Saya was the koiguchi - the actual opening itself is fine, but the wood is usually carved out in a different, more visually pleasing way in more expensive katana. I will demonstrate in pictures. However, due to the low price of the sword coupled with the splendid quality of it so far, I am not upset about it. I expected it. Functionality-wise, it is no different.

Upon handling the sword, I do find that it is slightly tip heavy, and it isn’t as easy to swing and stop as some other, lighter swords. But keep in mind that this sword as no bohi, so that is a big factor to consider. With that in mind, it is not especially tip heavy, it is perfectly acceptable for a Japanese sword.

I have not had the pleasure of test cutting with this sword yet, but I am confident that when I do, it will cut very well. It has a very sharp edge and doing iai with it is a joy (a slightly sore one at that, though!)

In conclusion, the SBG Ryujin Custom Katana is a very good sword. I highly recommend it to anyone who is looking for a functional and aesthetically pleasing katana that they can rely on in the Dojo (or for casual test cutting, if that’s what you’re looking for). It also makes a very good project piece, as what I am doing, for those who wish to modify their katana to their own personal preferences!

If you wish to turn it into a project like Ealdos did and rewrap the tsuka to make it look like a much more expensive sword, here are some free tutorials on SBG

I already unwrapped it and cut the tsuka down to about the same length of the Tozando iaito. I'll be putting a nice tan-grey Tsukamaki on it, with both the menuki in the center of the tsuka; mainly because when I shortened the tsuka, the bottom mekugi pin is at the same location as where the bottom menuki would be. So it would be blocked. A center position for Menuki looks nice in some cases, reminds me of ancient Tachi.

If you do rewrap the blade, I recommend applying Hishigami, I've come up with (well, I think it's my idea at least) a simplistic and easier method of applying Hishigami. Instead of making individual folded triangles, I made one long strip of sturdy cardstock in the shape of 5-8 triangles in a row. It isn't traditional, but functionality wise it works at least decently. It definitely helps shape the tsuka nicely. 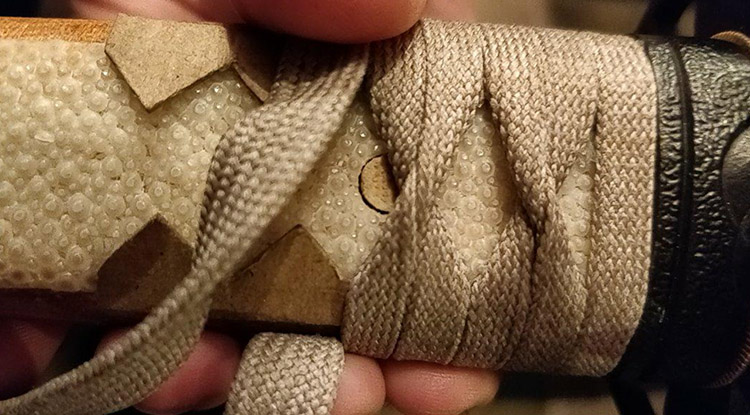 Here's a picture or two of the finished work! The tsukamaki is not perfect, but it feels very nice and is extremely tight! Great for iaido. Also the Hishigami technique worked fantastic! 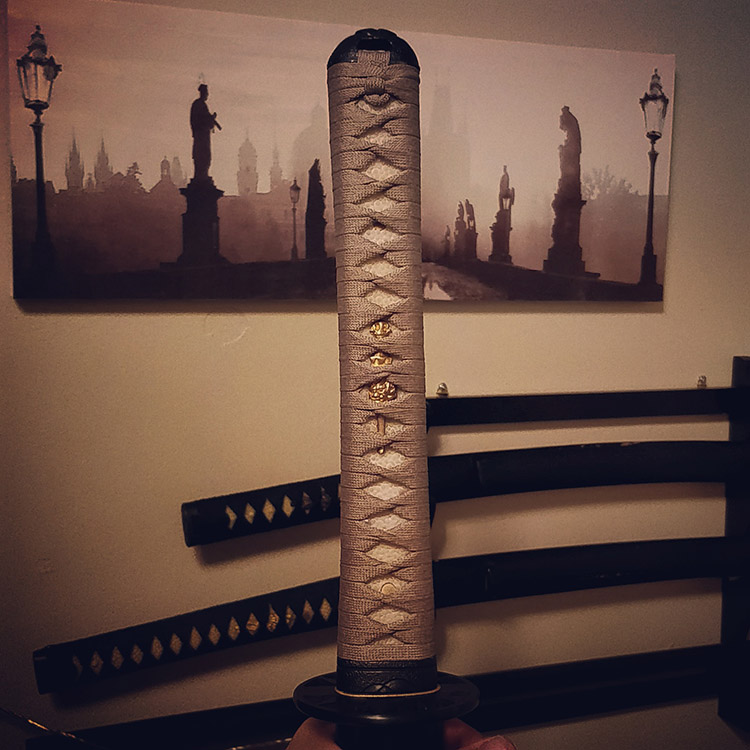 The Ryujin Custom Katana is available at SBG here for just $279.99

I hope this ryujin katana review has been helpful. To return to The Ultimate Guide to Authentic Japanese Swords from Ryujin Katana Review, click here