The Shobu Zukuri geometry is quite different from your standard run of the mill Katana, with a blade that bears quite a few similarities to those Korean swords, the Jingum.

Most notable is the absense of a yokote (border line between the tip and the cutting edge) and a graceful, curved slicing tip that was used to great effect against the Mongol leather armor during their attempted invasions in the 13th century AD.

But these days, the Shobu Zukuri design seems to have limited appeal - and the Cheness version, the Kurome, is about as close to a 'fail' as I have seen their 9260 monotempered blades..

Read on to find out why..

Replicas of the Shobu Zukuri style of Katana are very rare in the production sword market. I'm not sure exactly why that is, the blades are almost identical to a standard Shinogi Zukuri Katana - except for the tip, which terminates in a much finer point.. 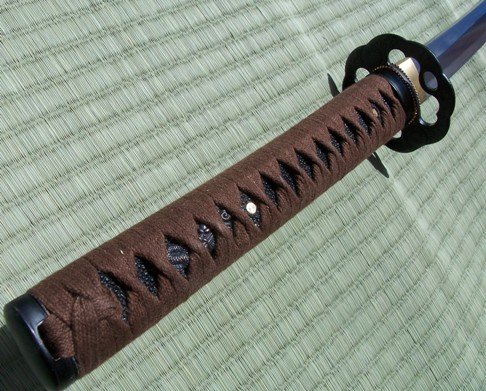 With two pegs, one brass (for safety, as recommended by a very high ranking JSA practitioner) and one winter harvested bamboo do their job superbly  though there was a little sawdust from where the mekugi ana were drilled through on the black same. However this was easily cleaned up with a damp cloth in less than a minute either side.

Menuki ornaments on either side of the tsuka handle are simple are a bit hard to identify but appear to be of a Dragon of some description, mostly black but with the copperery base showing through on the scales and in the embossed designs.

The iron tsuba is also more detailed than previous Cheness models, and rather intricate and hard to describe, so I think I'll let the pictures do the talking for a moment... 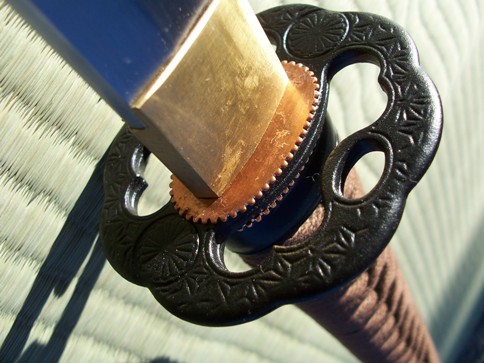 Apparently, it is from this tsuba this particular sword gets its name  Kurome, meaning Black eyes and it does seem to have a somewhat brooding presence befitting of this style of ancient Japanese swords.

All in all, the only things I can really fault on the hilt assembly is the habaki looks a bit messy and the alloy fittings are not as sturdy as brass or iron, so it is a little mismatched. But overall, so far so good. 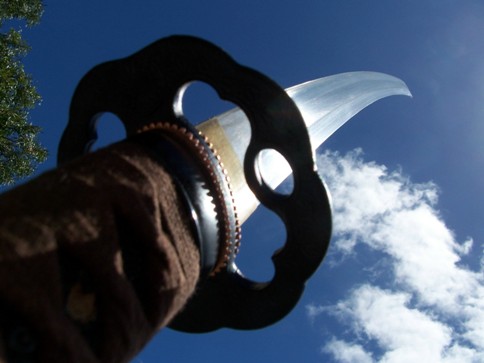 The Kurome has a decently polished 9260 Spring Steel blade. In most respects, it's no different than the Tenchi - same weight, same balance, and same general feeling.

The only major point of difference is - well, the point itself. 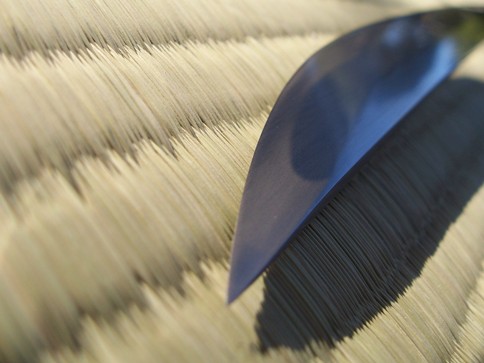 My only concern was that the tip looks a little - fragile..

Sure enough, as it is not differentially hardened, it needs to be very strong to withstand accidental contact with harder objects. So I planned my testing accordingly...

Now with a blade seemingly identical to the Tenchi, I had to test it a little differently.

The Shobu Zukuri is supposedly designed for tip cutting and piercing. So for my first test, I tried some tip cutting - i.e. cuts using only the tip..

It cut through to the depth I positioned the sword at - with injuries to the Tatami that simulated deep cuts that would pretty much go through down to the bone... So I followed it up with a few 'like a knife through butter' full length cuts to finish off the mat.

No problems so far..

The only thing left was to test the tip penetration and durability - on a 55 gallon steel drum..

Now I have tested a regular Cheness 9260s kissaski on these barrels before with no problems whatsoever. But the thin, needle like point of the Shobu Zukuri swords was a totally different proposition than the chisel like kissaski of a regular Katana...

The wall of the drum was a serious challenge. These things do not puncture easily... And I was quite certain that going into the test, the fragile looking tip would either snap off or bend like a pretzel...

Only one way to know for sure. But whatever happened, I knew it was time to say goodbye to this Shobu Zukuri in its current pristine condition (the things I do for the sword community! Lol).

Not exactly the best result... But far from the worst..

The fragile looking tip proved stronger than I first thought. But it lacks the piercing power of the standard kissaki.

True enough, the damage was less than it could have been. 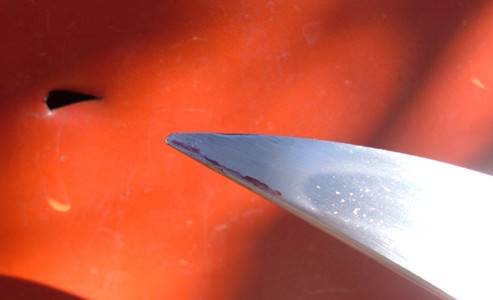 But the fact of the matter is that it did not pierce very well.

Overall, it's hard to really recommend this sword when you have the choice of better all rounders like the Tenchi and the O-Katana..

I mean, let's face it, tip cutting is hardly very impressive. And if the blade has no apparent piercing advantage over a normal kissaki, and is considerably less durable, it comes off decidedly as the poor cousin.

Because it does not offer any real advantage that I can personally identify, and I only stock swords at the SBG Sword Store that I would happily buy myself, we do not carry this sword in our Cheness Cutlery line up. However if you like it the only place it is available is here from Cheness Cutlery directly.

I hope this review of the Shobu Zukuri Katana has been helpful. To return to The Best Japanese Sword for under $300 is MONOTEMPERED from Cheness Cutlery Shobu Zukuri, click here