There are several Tactical Katana available these days. The main issue though is not the design, but availability and proof that they actually can deliver the promise of a modern, almost indestructible blade..

The Hanwei Forge made one of the best ones and it was incredibly popular. But it was only available for a short period of time and then mysteriously discontinued..

Hot on its heels came a cheaper version that is almost a carbon copy made by United Cutlery under their 'Honshu' sub brand. The only problem with this blade is that while it is decent enough for the $189.99 price point, it is not all that practical - is not very sharp, and really not all that much different than any other non Tactical Katana at this price point..

You would want something like the Tactical Katana by Miller Brothers.. But the $1,600 price tag makes it kind of hard to swing.. 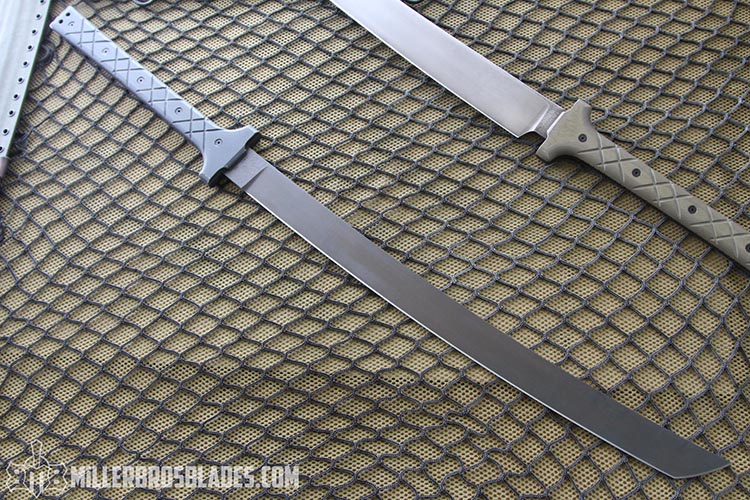 Really nice, but the $1600 is a little high for a fairly simple design..

There really was not much in the way of a middle ground..

So since no one else was doing anything much about it, we decided to make one of our own..

One sword maker came to mind for this design. Someone who took a lot of pride in their work, was famous for their heat treating and made their swords in the USA..

So we contacted Chris Palmer from Scorpion Swords, created a Prototype - and tested it beyond any reasonable usage before releasing it to the public.

This review of this Tactical Katana is the result of all that work.. 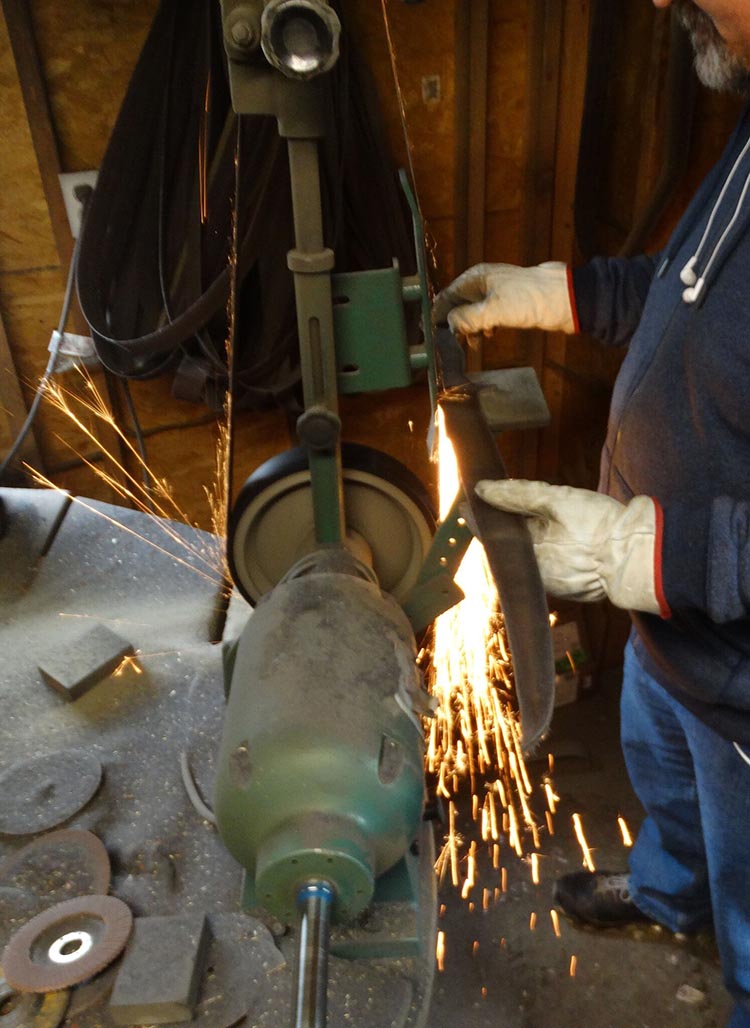 Chris Palmer from Scorpion Swords Grinding the Blade to Shape

The basic design of this sword can be summed up with a single word: sturdy.

Unlike the other so called Tactical Katana on the market, there is a minimum of moving parts - no habaki or tsuba that can be jarred loose - it is as solid a construction as is possible - with 100% full tang construction. 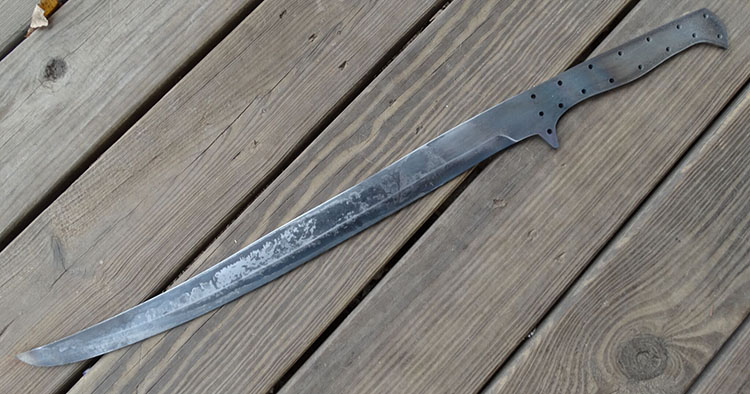 And after profiling and heat treat, looks like this..

The blade geometry is designed for maximum cutting power despite its relatively small size and has a lot of strength due to the wider/taller blade profile.

Made entirely from a single billet of American 1095 carbon steel - chosen for its hardness - it is expertly tempered in such a way to avoid the possibility of breakage, which is further enhanced by its relatively short 21.5" Ko Katana length blade.

Indeed, it is the heat treating process that makes this one of the strongest swords on the market - first it is heated to approx 1500 degrees until it becomes non-magnetic and is allowed to air cool. Then it is heated again and quenched in a vat of oil before heat tempering, heated to 550 degrees for an hour and once again air cooled.

Finally, the handle - which is made from hard wearing Black Linen Mircarta, a weather resistant plastic designed primarily for combat knives - is attached with multiple internal and two external pins, gorilla glued and clamped in place so that no matter what you do to it, it will NEVER come loose.. 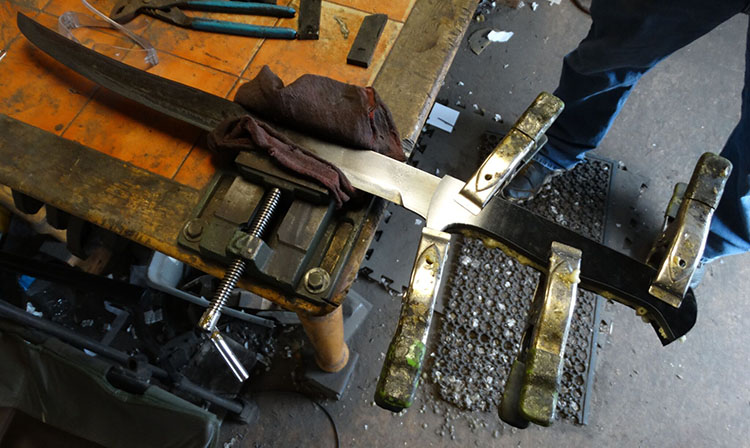 Pegged, glued and clamped - the handle becomes a part of the blade

The sandwich tang, attached in this way, is shaped at both ends to ensure a secure grip - preventing the hand from slipping onto the blade when thrusting or out of the hand if it is swung with a little too much gusto or encounters sudden, unexpected obstacles..

Can it really be called a 'Tactical Katana'?

There are several reasons why this sword can be classified as a Tactical Katana rather than just a Tactical Sword.

Technically, length wise - it is a Ko Katana - not a full length Katana, and is shorter than a standard Katana blade by around 9". The reason for this is two fold:

As far as the blade geometry goes, the blade is broader than a standard Katana - but this kind of wide blade has been seen on swords such as the SGC (pictured below) and the Hanwei XL Light.

If you look carefully at the blade it has a ha, shinogi ji and terminates in a classic shobu zukuri style.. 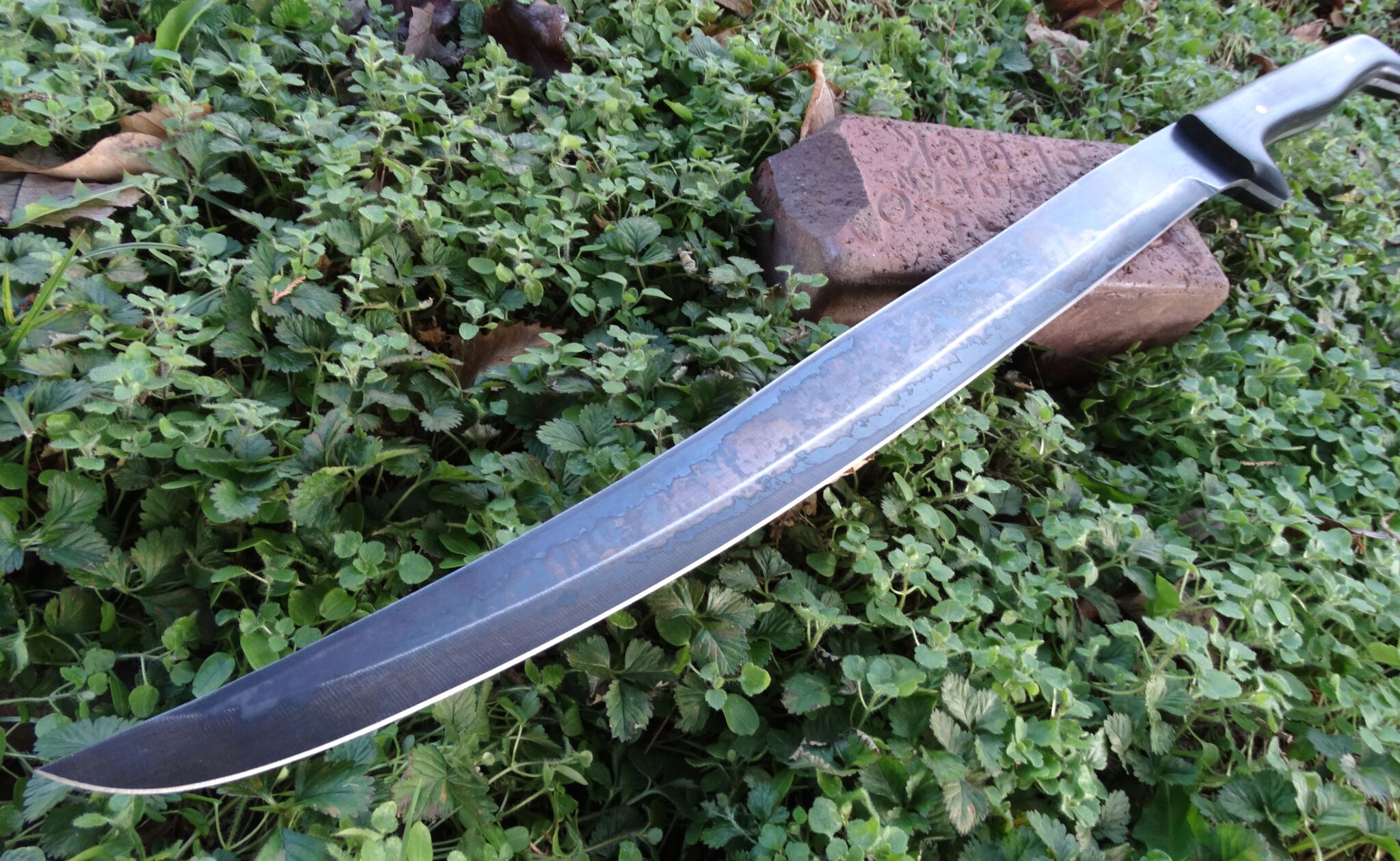 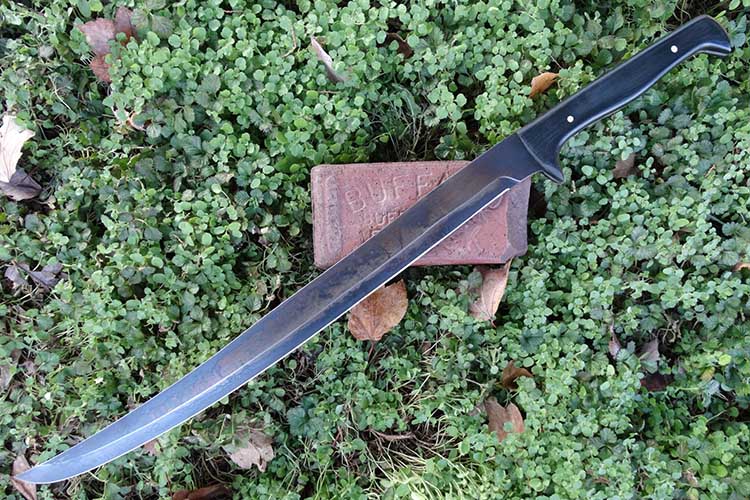 This, plus the actual definition of Katana is really just a Japanese style single edged, curved blade with a two handed grip - and its weight and balance being designed to mimic the actual handling and cutting power of a real Katana, I feel justifies the name..

And it sounds better than calling it a 'giant, super durable zombie killing kitchen knife on steriods'.. 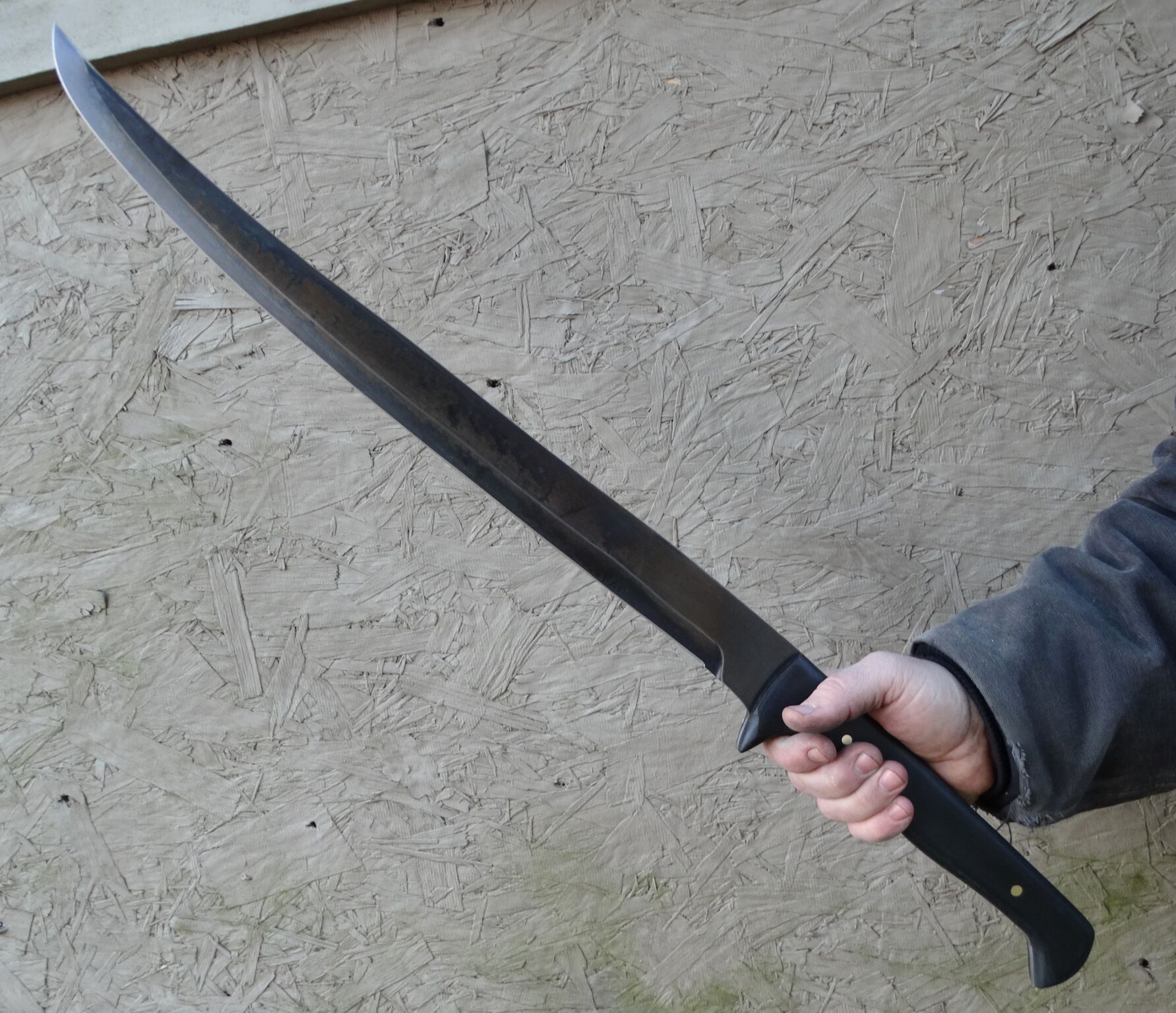 A rose by any other name..

Call it what you will. But as you will see from the tests and the full review by Jason Woodard that follows, it speaks for itself.. 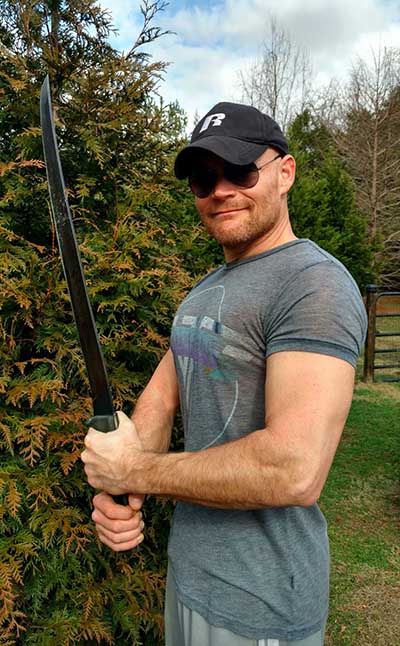 Hey sword lovers... I have been a fan of strong sometimes even over built swords for many years as some may know.. I can really respect a well built strong blade..

I have tested and abused hundreds of swords over the years just to see how tough many had been made for you all.. I have had several fail my harsh testing over the years...

So I was asked to put Paul Southren's design the "Tactical Katana from Scorpion Swords & Knives" through its paces to see how much abuse it could withstand.....

Once the sword made it to me.. I did have to wait until the weather got just a bit better.. Having a little time to get to know the sword, I gave it a good going over and I have to say I liked it right from the start... The blade is FULLTANG! Love that!! It feels so solid and strong.. I can respect that..

It does have a good edge on a sharpness scale I would say it came about 8 out of 10.. Pretty sharp... I do like the finish left on it from the heat treating.. Gives it a stealth look and wicked presence..

It`s solid!! the grips are very tight and cannot be taken or broken off..

It also comes with the option for a nice leather sheath that fits snug. Not fancy or anything but nice..

I have to say the blade over all has a bit of a plan look about it.. kind of simple and to the point ;)

I like it. No BS, no fancy designs, no fulle... Just a strong sword that means business.. Would make a great weapon if the world ended and you needed something that would not fail..

Could not wait to test it.. With the first few tests I just did some simply cutting on some plastic jugs of different thickness.. Had no problems cutting them clean.. I then did some cutting on a few standard cutting rolled up mats..

The KO Katana cut them fine.. Not bad for a blade I did not have to sharpen..

I then did some cutting/hacking on plywood .. Again zero issues.. The sword hacked large chunks right out.. For the next test I stuck the sword many times on a metal pole...

After that I checked the edge and grip fittings.. The grip had no issues.. Nothing loose or damaged.. The edge had very miner scuffs. No real damage. Nothing that could not be buffed right out.. I then did some heavy hacking into some dense seasoned fire wood.. 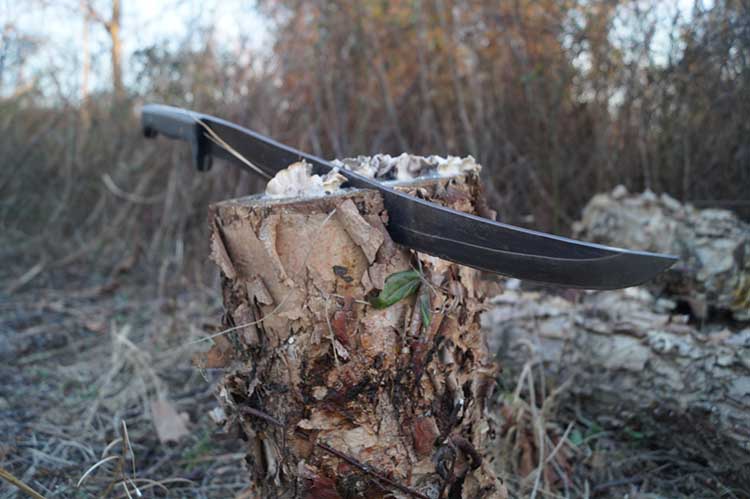 Was able to hack into the wood many times.. The blade even got stuck a few times from the deep hacking.. I then set up a galvanized trash can. Filled it with water and did some heavy hacking and stabbing.. The blade held up fine.. No damage to the blade, nothing came loose.

For my last test I set up a concrete stepping stone in a vice on its side.. Not sure what would Happen I made sure to have a helmet and face shield on.. I hit the concrete very hard several times.. The sword was able to break up the concrete stone in just a few very heavy blows, split the stone down the middle and I even struck the steel vice it`s self a few times by mistake.. Yikes!!

VIDEO: All the Testing

From light to extreme testing, this sword handled it all

The KO katana made short work of the concrete in no time.. After striking both the concrete and vice several times.. I was not sure how the edge would hold up.. I gave it a good up close inspection .. The edge did not roll.." a sign of good tempering and a tough steel"

The blades edge did take some slight damage of course from hitting concrete but I think some damage came from striking the vice its self as well. I have to say I`m very impressed at how strong, tough this sword actually is.. It held up.. I like it a lot!

So for the record This new design passes my tests with flying colors...

The SBG/Scorpion Swords Tactical Katana is exclusively available HERE at the SBG Sword store for $284.99. As it is made to order, please allow 4-6 weeks for completion and delivery.