What is a Jian?

Short answer. Tai Chi swords are Jian! And Jian are Tai Chi Swords - a straight bladed, double sided sword. This one was actually my Mothers sword, she trained in Tai Chi for over 20 years and when I was a kid used to do exercises with this sword every morning.

Tai Chi Swords (Taijijian) are any traditional Chinese Jian from the Qing Dynasty onwards and had no special shape or styling - any Jian from the period could and was used for Tai Chi training.

Most people who do Tai Chi and who learn the sword forms use either a simple wooden sword, an extendable sword for easy transport or a cheap stainless steel blade like the one pictured to the right costing around $30-50 or so. Some Tai Chi schools sell their own swords - but most of the time they can be sourced cheaper elsewhere - and a good teacher will not mind where you get your sword, as long as you train seriously.

Below are some cheap options from each of the three categories I just described if price and fast delivery are your only concerns. 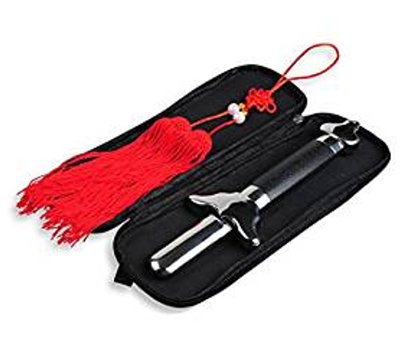 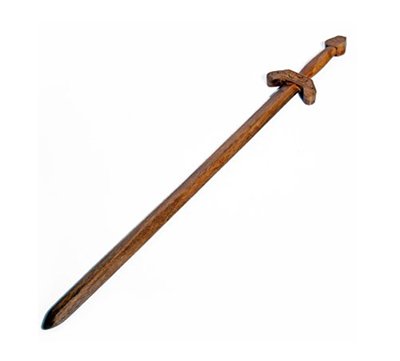 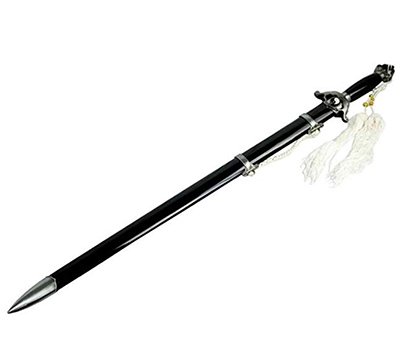 But these are not the good quality swords this article is about.

Sure, when I was young, I was fascinated by my Mothers sword - as I noted in the sidebar, she used to train in Tai Chi for over 20 years. To me it was incredibly cool, and sensibly my Mother would not let me pick it up or use it - which if you have seen how I have tested swords over the years, was probably a very good idea.. ;-)

But it was a cheapy - and chances are a good swing at the wrong time could cause the blade to come flying out..

Used slowly these cheap swords are okay, and most are reasonably well balanced - but once you have seen some real swords, they look as cheap as they are - and I don't know but I think that the more respect you have for your sword when you train, the better you will train, and will in turn lead to better results.. 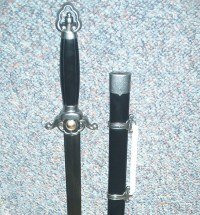 Most people who are at least a little bit serious about their Taijijian at least get something like the Practical Tai Chi Sword made by Paul Chen's Hanwei Forge.

They are around 2-3 times the price of the typical cheap entry level swords like we listed above, but offer exponentially better quality for the extra money spent.

It has a properly tempered carbon steel blade, solid handle construction, well balanced and yet still very lightweight (1.5lbs, which is at the low end of most historical Jian) And as you can see from the break down video below, its actually pretty decent under the hood too..

Additionally, while not razor sharp, it is not blunt either (taijijian should not actually be blunt, at the very least the last 1/3 of the blade and the tip should be sharpened) - and is solid enough so that it could just as easily be used for Kung fu as Tai Chi with no fear of the blade suddenly coming loose and flying through the air like a bad impersonation of crouching tiger hidden dragon gone wrong..

For most people, the Hanwei Practical Tai Chi Sword is good enough, and is certainly a big step up from the typical cheapies that most people tend to end up with.

But if you are serious about your Tai Chi, or are looking for something much more attractive for demonstrations or just to take it all to a whole new level, you might want to consider swords of a much higher caliber that are made with some real attention to detail.. 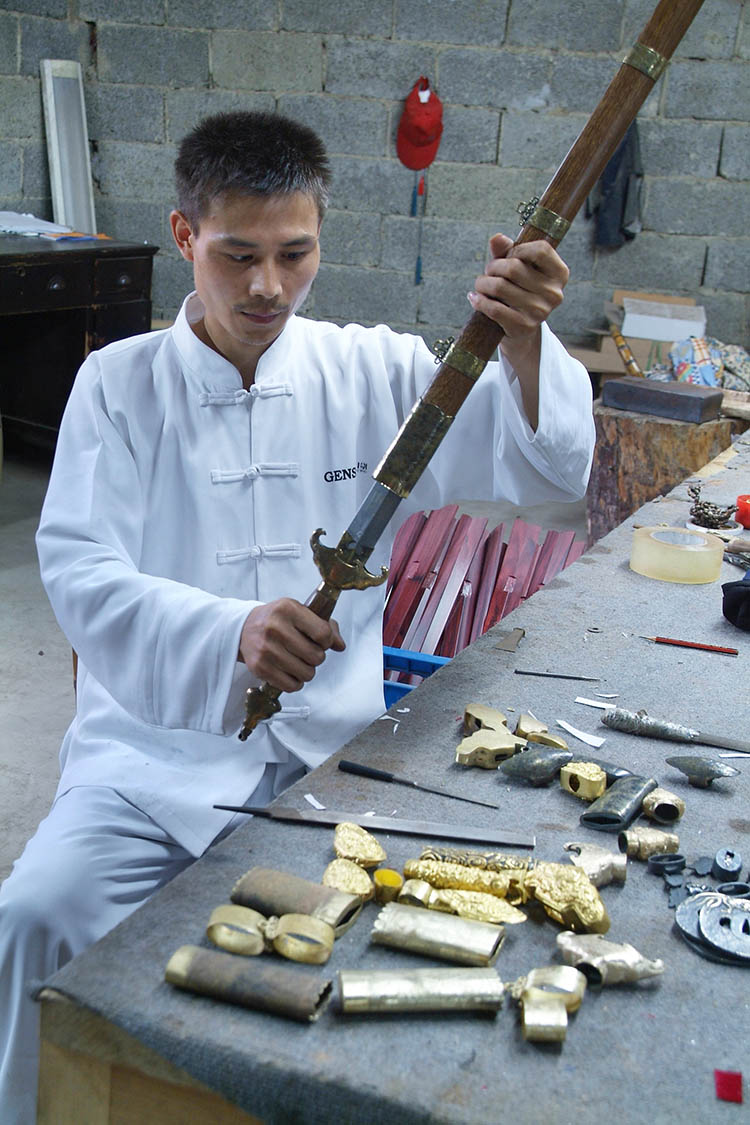 The gentleman above assembled the master smith forged blades for our very own line of heirloom quality Chinese swords called forge direct. The end result? 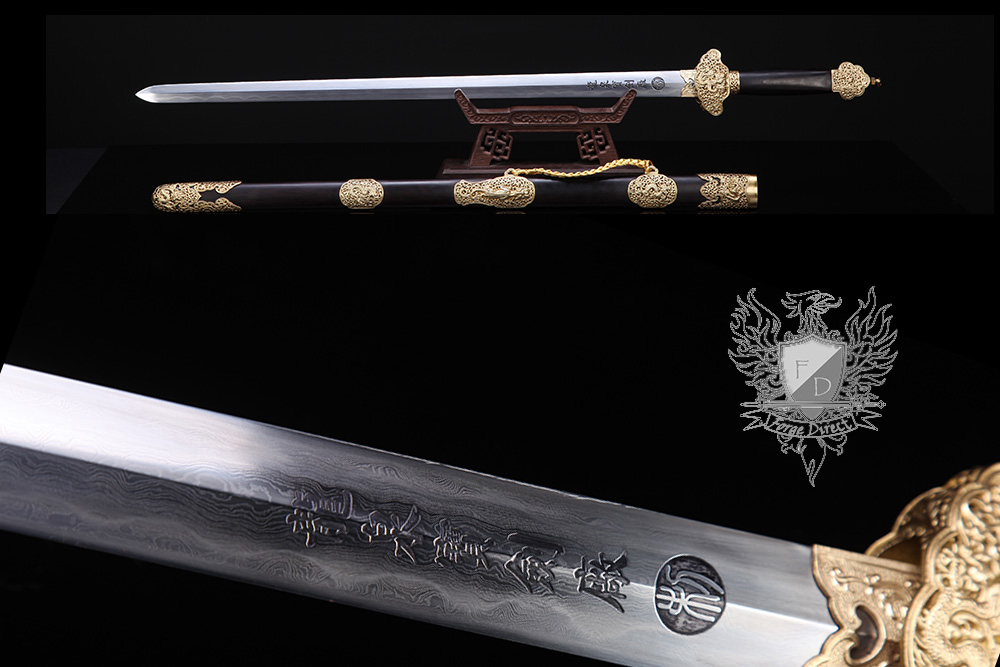 As you might expect, with a differentially hardened blade forged and folded with a Damascus pattern by a certified Master Smith, and mounted in premium black ebony wood handle and scabbard with detailed hand cast and hand finished brass fittings, these swords are not cheap. But nothing else out there really comes close in terms of quality and beauty.

Most antique Jian that are suitable for Tai Chi (i.e. not the big two handed Warring Stated and Han Dynasty Swords) have a point of balance between 4-6" from the guard and typically weighs in at 1.5-3lbs depending on how long it is and the weight of the fittings. For Tai Chi swords, the weight and where the balance point is at is both a personal preference and the preference of the particular Sifu you are learning it from.

The Jian above with a long 29.5" blade, weighs 2.3lbs and has point of balance around 3.9" from the guard - allowing it effortlessly flow from one stance and technique to the next. But care must be taken as this is very much a real sword with a live blade - which of course for true connoisseurs, could not be any other way..