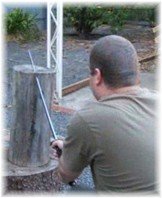 As any of you who have read my other reviews may know, I love a tough sword - a sword that can withstand levels of abuse far beyond what was historically possible. And that's exactly what the Tenchi 9260 Spring Steel Katana is - an incredibly tough sword designed for continual and unrelenting test cutting practice.

It first made it's debut alongside it's now discontinued brother, the Shura - and came to the attention of the sword community (and myself) when it was tested heavily by Martin "Oz" Austwick here (the page itself is long gone, but is archived in the waybackmachine link previous).

It's certainly not a very fancy sword. The blade is often a little roughly polished here and there, the fittings are very basic and a little blocky, but it's as tough as an old boot.

While the original Tenchi review here is getting a little old, the Tenchi has stayed more or less continuously in production since it was first released simply because, it may be rough around the edges but it delivers the goods.

It would be unfair to describe it is ugly, but rather utilitarian.

It comes housed in a decent saya with thick, hard wearing synthetic sageo cord for actual dojo use. And it's weight and balance is basically identical to the other leaders in the monotempered Katana field, though as it comes in two versions - the bo-hi (fullered) version is a little lighter than most others though retains it's overall durability due to the 'I-beam' like construction of the bo-hi itself (though loses a little in cutting power when in this configuration). 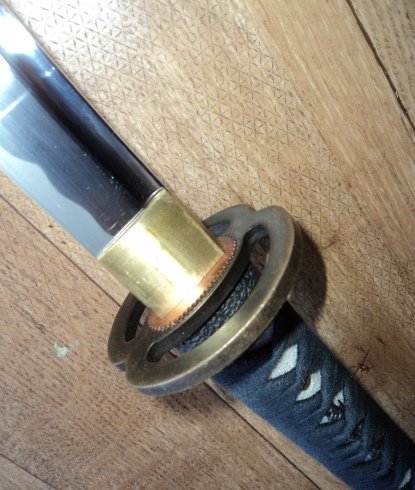 The fittings are, as I mentioned, quite average - though the distinctive solid brass double C ring tsuba does make it stand out from similar swords that use this tsuba style and gives it a little extra flavor.

But here you can also see some of it's shortcomings, such as tool marks on the blade (quite common) the fake hamon like (it's monotempered, so it has no hamon line - what you see is 100% cosmetic), gear cog tsuba and non alternating quite shoelacey cotton ito wrap.

But it's put together tight - indeed, if you take a closer look at the tsuka (click the image for a larger pic) you can see it is actually reinforced by replacing the second mekugi peg with a brass pin (and also that classic, somewhat creepy spidery god menuki that adorns the majority of Cheness swords).

Yes, it's not going to win any awards for it's beauty. But it more than makes up for this somewhat homely look with it's raw durability.

Putting the Tenchi to the Test

Now if you read the test to destruction by Martin "Oz" Austwick here (and if not, I suggest you do so now) you'll have a pretty good idea of what it takes to destroy one of these swords. But destruction isn't the aim of the tests shown below - what I want to do is demonstrate what this sword can do at the very edge of its limits.

Now I have tested more than one Tenchi on a large variety of targets. From cutting water filled bottles, to tatami mats and cardboard boxes of various sizes and shapes, the Tenchi handled all of these with ease.

I would not describe the edge of the Tenchi as feeling particularily sharp. But this feeling can be deceptive - it's extra niku (meat) and the blade geometry mean that it might not feel sharp, but it can cut quite well straight out of the box - and because of this "Niku" handle heavier targets with ease.

Here's an example of what I mean with the bo-hi version cutting a 2" sapling.

So after playing around with various standard targets for a while, I decided it was time to step my own initial testing up a notch or two...

Now normally, you wouldn't go much harder with a Katana than tatami and bamboo. After all, a Katana was essentially designed for cutting human flesh and bone, not plastic or tree trunks. But since the 9260 steel is so resilient, I decided to up the ante a little and try cutting some very thick and heavy plastic containers - in this case an impact resistant 10 gallon water filled chemical jug monstrosity. 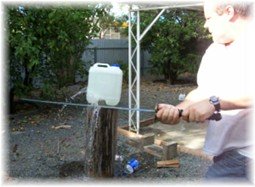 A quick check of the blade revealed no edge trauma whatsoever nor any structural damage to the sword, which with just about every other sword in this price range would see it bent out of shape and/or blunted beyond practical usage.

Impressed by the 'wounds' this blade inflicted on the heavy plastic containers, it was time to take on a much more demanding target, one that would send shockwaves into the blade and handle and quickly identify any weak points - by slamming it into a solid woodblock..

I've never seen a blade bury itself so deeply in the woodblock before!

I repeated the exercise once more, and then a few more times for good luck, and each time it bit so deeply that I was in awe of its damage potential. As you can clearly see from the videos, this is one very frightening sword!

With the steel buried deeply in the wood, I bent it from side to side, testing its extraordinary heat treatment and steel construction and while it certainly was not in any way 'floppy', you can see how it would forgive even the most clumsily executed cut.

Of course, such deep cuts into an unforgiving medium like a wood block that would destroy many a normal Katana did leave a few minor scuff marks. But apart from that, the blade was as keen and as strong as ever.

And a few scuff marks didn't worry me in the least.

I didn't buy this sword for its appearance - I bought it for backyard cutting fun - and as you can see, it went far beyond my wildest expectations of a Japanese sword...

The Tenchi is most certainly not the most beautiful looking sword I have ever seen. If on looks alone, I would probably not buy it.

But after seeing it tested to destruction, and testing it myself on a variety of conventional and unconventional targets, I could not help but be impressed.

It's not for everyone true. But maybe, just maybe, if you like solidly build swords that you can rely on, the Tenchi is one of the best you can buy for under $300. That much is for certain.

We were so impressed by the Cheness Cutlery Tenchi Katana that apart from the manufacturer, we are the only other company authorized to offer it and have made it available right here at the SBG Sword Store for $279.99.

I hope this review of the Tenchi was helpful. To return to The Best Japanese Sword for under $300 is MONOTEMPERED from Cheness Cutleries 'Tenchi' Katana Reviewed!, click here.