well, first of all, don't worry, I didn't use any big grinder of any sort. I tried a flap wheel (like this one). 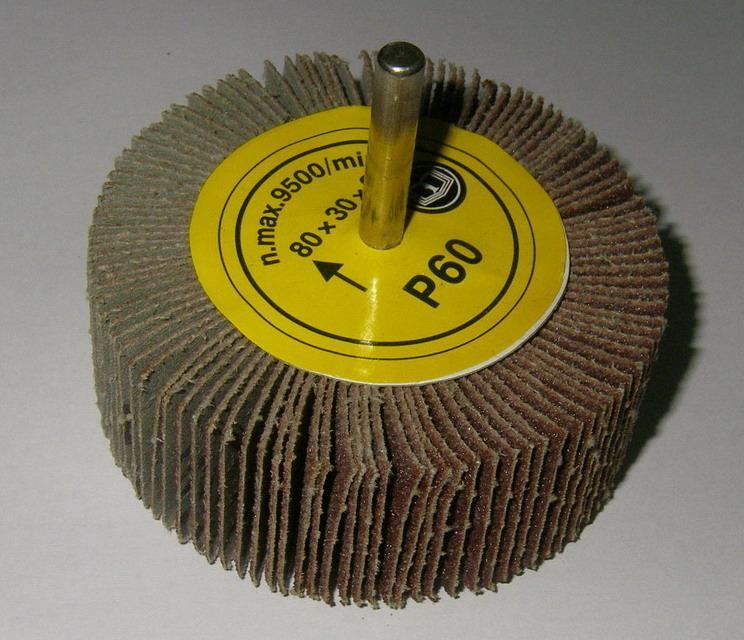 Mounted on a press drill (so it could be stable) on a folded steel blade. Of course, I could have destroyed it, you'd tell me, but it already was; I bought it for 5o bucks from a guy who tried something even worse... Well, the blade had chips and I also discovered that it wasn't even tempered... no enough to retain a proper edge by cutting dry bamboo, at least (the paul chen practical katana does this without even a scratch)... yet, the folded steel part was true and it does have a minimum value because of it.

Now what happened with the flap wheel is interesting, 'cuz since the sides of it are flat, you just have to put the blade on it the same way you would on a wetstone or sandpaper sheets. Also, take note that the flap wheel is made so that (contrary to a grinding stone, disk or whatever, that are hard enough and go too fast so that it overheats the blade) the flaps just brush softly the blade instead of pressing on it. No sparks, no heat, no destroyed temper/blade. I was able to restore the hada to a minimum (you see, I only had 6o, 8o and 18o grits of flap wheel sandpaper), enough to be able to see it clearly. the scratches made by the flap wheel are more precise than when done by hand (no swirling effects).

After this one blade, I tried to restore the sharpness of my paul chen practical katana. Even though it was still able to cut plastic bottles, wooden sticks or bamboo very neatly, I wasn't able to do the paper cut test anymore. Then I tried the flap wheel on it... It can cut paper neatly again! the only thing, though, is that since it can't be disassembled, there is a fine section, of about half a centimeter, that can't be done properly (the pk is even more beautiful once the etch is off, by the way, and don't worry, the hamon is real and can still be seen... much prettier for my taste, since I don,t like etches and false looks).

It saves time and effort while still doing a great job! By hand, I would have to pass a whole night on a blade and I still wasn't satisfied (ok, I DID have sheets with more grits, from 8o to 6oo... at least two hour per grit). Now, with a flap wheel, an hour or two and you're done (but I have yet to find flap wheels with finer grits than 18o... anyone knows which company produces such wheels, if they exist?)!

So, I think this is a great way to sharpen your swords without taking too much time. But I must warn you, even though I am satisfied with what I've done, I am no expert. So knowing what I know about swords, I would never dare doing this on a 5oo$+ blade, got it? It is ok if you want a functionnal practical sword with basic sharpening, which means : it's fine, really, it will cut razor sharp and you won't destroy the geometry nor the temper, but you can't mirror polish a blade with grit 18o.

Also, ty and practice on a cheaper blade, if you don't want to take any chances...

Now a message to those operating this site : (first of all, I think you're doing a great job!) Could someone among you read, try and review? I would then be able to know what others think about it, thanks!

Join in and write your own page! It's easy to do. How? Simply click here to return to Sharpening Techniques and Tips.