Somewhere between a reenactment blade and a cutter, with a few minor modifications these swords can go either way. But one thing is constant – they are easily some of the most beautiful Viking age swords available for under the US$300 price point, and they just keep on getting better...

Out of all the various Viking battle swords I have seen on the internet, there is little doubt that even this early version of the Oslo Viking sword is one of the most strikingly attractive pieces around. 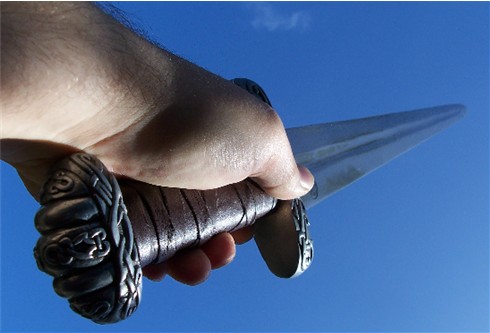 And I have to say that pictures don’t really do it justice. This is a sword you really have to see for yourself to appreciate.

Since this review was made, the sword has received numerous cosmetic and functional upgrades. I'll come to these in a moment, because the basic theme and the most important part - the blade - are unchanged..

So let's start off with.. 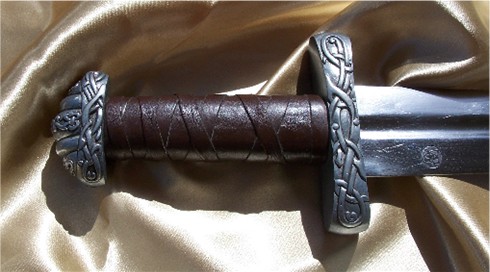 With traditional Viking patterns that are said to represent the Nordic God Odin, the pommel itself is perhaps the most visually stunning part of this sword. 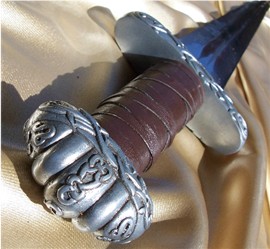 With richly embossed swirling knots throughout the 5 lobed pommel and thick solid cross-guard, the fittings of this sword have a presence that pictures simply cannot do justice to.

In the smallest way, the effect is slightly diminished by the fact that on the undersides, the absence of the pattern looks a little strange at first. But somehow, on closer inspection, the contrast works.

The dark brown leather wrapped wooden handle looks superb. Consisting of a solid piece of leather, overlaid by a crisscrossing strip of separate leather – it completes the hilt very nicely.

Again though, I found that the cross wrapped leather strip was not as tight as it could have been and starts to shift a little in the hand with extended usage – bunching towards the pommel. While this is more of a cosmetic issue than anything else, it can get freaking annoying...

In keeping with Darkswords general responsive attitude towards the sword buying community, the latest versions of the Oslo Viking sword has a hugely improved, 'wiggle free' handle consisting of an ornately carved and extremely attractive carved wooden handle. 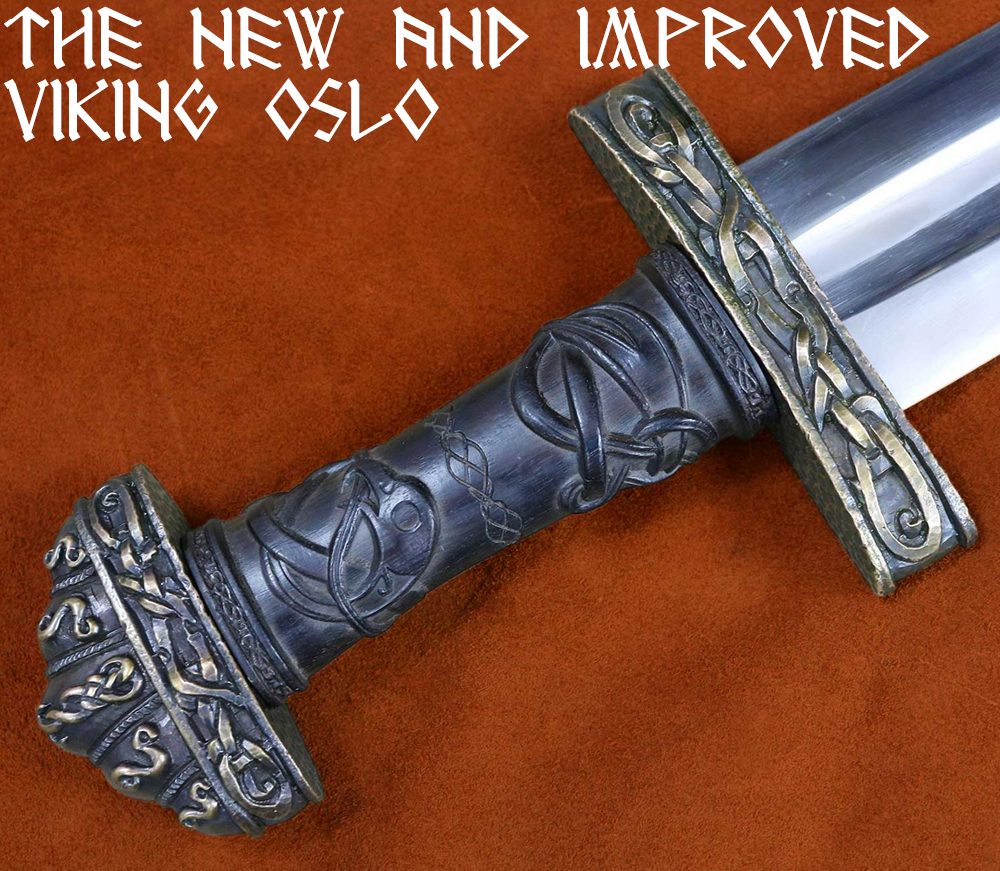 I wish more sword making companies would be responsive like this...!

The hilt assembly itself is extremely tight as I have come to expect from Darksword.

Ideally, and traditionally, true Viking battle swords were peened, but Darksword have done the next best thing.

Though the tang is threaded, they heat up the tang and the pommel until both are white hot and then firmly screw the tang to the pommel before quenching it, effectively setting it together as one piece, therefore the changes of it loosening during normal usage, as opposed to a purely theaded tang, are greatly reduced.

Like most Viking age swords, the 1308 is more or less an Oakeshott Type X, and while purists may find the profile taper seemingly a little too pronounced, and the point just a little too acute – it is within variations that were found in historical Viking battle swords.

As with all Darksword Armoury blades, the edge is unsharpened – but at 1.5mm is narrow enough to be readily sharpened if so desired and an optional sharpening service is available.

"As usual, the finish of these Viking Battle swords shows obvious hammer marks from the hand forging – but it suits this practical blade well..."

There is some distal taper in the 31” blade, with the thickness at the base starting at around 5.8mm and becoming 4.7mm as we near the end of the fuller, which as with any historically referenced Type X sword, terminates a few inches from the tip.

Extremely stiff and strong, the 5160 spring steel blade is beautifully tempered – and when flexed (with some difficulty I might add) always returns to true. 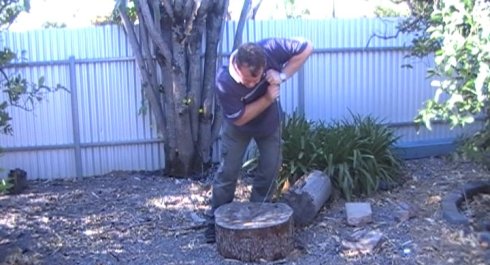 As you may know from the previous destructive testing of a Darksword Armoury sword on SBG, these are extremely, extremely tough blades. And as they are not shipped sharpened, there is little point in demonstrating what they can cut as that really only shows how the sword was sharpened.

But I can hardly finish a SBG review without something interesting and dramatic! ;-) So to test this Viking battle swords blade strength and overall structural integrity to the limit, I found a suitable target in a dying tree that had been poisoned for the disgusting habit of its roots entering the sewer system and wreaking havoc...

Now naturally enough, such a target would be impossible to cut through with one blow (outside of anime that is) ;-) And striking a solid target like this at full power is a sure way to determine both the blades strength and temper as well as the integrity of the hilt components.

More or less like taking several hundred steel on steel training sessions and compressing it into a few strikes to find any weaknesses.

I delivered three stepping blows, with the second one a full power ‘killing’ strike – which you can hear from the video landed quite hard. As the tree wasn’t going anywhere, the force of the blow traveled down the blade and into the hilt, though the positioning of the nodes within the sword meant that I did not feel a jarring impact (or have the pommel pop off).

Yes, I felt sorry for the tree - but it was on its way out anyway..

What can I say. These Darksword Viking battle swords are as tough as nails – but like the Vikings, surprisingly complex with its poetic fittings.

And like the Vikings did, it packs one heck of a wallop!

The best place to pick up the Darksword Oslo sword is HERE at Kult of Athena where they sell the basic model for $650 - and for $125 more, you can also pick up a version HERE with an integrated sword belt and frog.

I hope this review of Darkswords Viking battle swords has been helpful. To return to Modern Replicas of Viking Swords from The Viking Battle Swords of Darksword Armoury, click here