The Zatoichi Sword 
A Japanese Blade in a Walking Stick

Ever since I'd first seen them online, I'd wanted a Hanwei Zatoichi sword.

In fact, I even bought mine before I saw the original movie or the cool remake starring "Beat" Takeshi (pictured left) about the blind swordsmaster with the sword hidden in his walking stick (which incidentally, if you are into Japanese sword movies, is easily one of the best around! I highly recommend it).

I'd always thought that the concept of a hidden sword in a cane was very, very cool...

However, another factor that makes this sword so attractive is its incredibly low price tag. Because with a MSRP of just over US$100, if this sword was even half decent it would easily be one of the cheapest functional Japanese style swords on the market.

Before I start out my review, Id like to point out that while the Zatoichi sword isn't an authentic Japanese sword  (after all, its NOT differentially tempered, the blade isn't curved and the tang is really quite suspect) - it's still a very strong, sharp blade, especially for something its price range.

While I can't say that it really looks like a walking stick when sheathed, it definitely has an ultra slim profile and in fact looks more like some kind of modern black fighting stick than anything else. In fact, unless you knew what to look for, you almost definitely wouldn't think that it contained a sword

On the flip side, because it has almost no distinguishing features when sheathed, I personally at times found it a bit hard to figure out which side was the sharp edge

In fact, there is only one way you can tell which way the blade is facing  and that is by matching two slightly angled grooves on the handle (see pic, below) with the natural grip of your right hand. If the grooves fit the direction your fingers are pointing, the blade is facing upwards

Unfortunately (and maybe its just me) I still occasionally struggle a bit from time to time drawing this sword with the blade facing the right way. So until it becomes second nature, I recommend being very careful when drawing this blade and checking to make sure you have it the right way around!

After all, the blade comes pretty sharp straight out of the box  not anywhere near as sharp as the Practical Katana  but sharp enough to do some pretty serious damage if mishandled none-the-less.

Speaking of which, the blade is actually really quite a nice one and almost unheard of in this price range. It true that it isn't differentially hardened like the Practical Katana, and the temper line (hamon in Japanese) you see on it is only etched on for aesthetics. But it is a nice length of high carbon steel regardless, with a Rockwell hardness of around 50RC that has been properly heat treated.

But I am in two minds if this can REALLY be called a Functional Sword for one very important reason.

Zatoichi Sword - Functional Or Not?

My only real concern with the Zatoichi sword is its tang.

Due to its unique design and slim profile  a full tang is next to impossible for this blade. So instead, the Zatoichi has a kind of key and lock shaped tang which is mounted into the wood of the handle with a more than generous coating of epoxy resin

Now, while the amount of glue used should be sufficient to hold the blade in place (in fact, I doubt that the blade would EVER come flying out because they really do use A LOT of epoxy) it still isn't a full tang. And that means that this isnt truly a battle ready sword...

And that's a darn shame. Because the blade is actually pretty nice, especially for the price.

In fact, the tip of this sword seems even sharper than the Practical Katana Plus! Which is actually a bit weird, as thrusting this sword into something I would NOT recommended - because with no handle, it would be all to easy to lose the grip and slice off a few fingers.

Anyway, despite all this, I know for a fact that there are still plenty of Zatoichi sword owners who use them as beaters and cheap cutters.

So I decided to put the sword to the test with a few basic cutting exercises to see how it would fare.

In terms of weight and balance, the main problem with the Zatoichi sword is because the handle is so light, it tends to be a blade heavy.

However, if you can get past that, it is a reasonably good cutter  though not anywhere near the same league as the Practical Katana Plus  for obvious reasons.

My first test was the classic water bottle test that I had done previously when reviewing the practical katana plus.

Unlike when I did this cut with the Practical Plus Katana (which cut so cleanly I actually thought I had missed), I could definitely feel the impact of the Zatoichi sword against the bottle. In fact, it kind of felt a bit like I had hit a home run!

And while my blow had completely severed the Pepsi bottle in half, the cut wasnt a particularly clean one. Especially when compared to the cut of the Practical Plus Katana, as you can plainly see in the pictures below.

I decided that the best way to see how the Zatoichi really handles is to try it against some bamboo river cane. 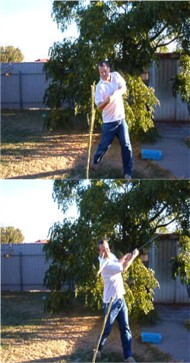 I had heard that the best way to wield the Zatoichi sword was with a reverse grip, cutting diagonally upwards. So assuming a "waki-gamae" stance, I let fly with a fast rising cut.

The sword cleaved through the bamboo in one hit easily enough, but the impact on both pieces of bamboo was significant, knocking the lower half of the river cane to one side  which is not the best sign as it means that the sword didnt cut immediately, but pushed first and then bit through.

However, when I checked the cut results on the bamboo, while it was a bit rougher than the kind of cuts I had achieved using a Practical Plus Katana it was actually a lot cleaner than I though it would be

I tried several other cuts, about 4 or 5 in total, and the blade held up fine.

And while the results were pretty much the same on the rising cuts, the traditional diagonal descending cuts didn't fare as well, resulting in a very uneven, jagged split. Giving weight to the theory that the best way to use the Zatoichi sword is in an upward, diagonal manner (which would, in fact, be very effective for a surprise iai draw).

Have a look at the pic below to compare the end results of an upwards diagonal cut from the PPK to the same rising cut performed by the Zatoichi.

Cleaner cuts from a Hanwei Katana, the PPK

In some states of the US (notably CA, MA & NY) this sword is considered to be a concealable weapon and is highly illegal. It is strongly recommended that you check to see if this sword is legal in your state or country before attempting to purchase this weapon.

Maybe I am not being fair to the Zatoichi sword. After all, for just over 100 bucks, its a very nice blade and well worth the money. But if you are looking for a REAL Japanese sword for training or cutting practice, it probably isnt for you..

However, that said, there is still something very cool about owning this sword.

I dont know if it is its sleek, concealable profile or what  but as far as value for money goes, it is still certainly worth the sticker price. And for many collectors, its a great opportunity to own a real Paul Chen blade at what amounts to be little more than many people pay for a stainless steel wallhanger.

The price has fluctuated over the years, going up and then coming down, but has consistently been available at the lowest price here at Kult of Athena where you can get it for $153.95

I hope this information on the Zatoichi sword has been helpful. To return to sword-buyers-guide.com Ninja Swords Online from Zatoichi Sword  The Japanese Sword in a Walking Stick Reviewed, click here.