The 1827 Hungarian Officers Saber by Universal Swords of India, a company that has been making military replica swords since the 1960s, is a good example of what to expect from this company who specializes in replicas of military swords and sabers.

Let's take a look at what they have to offer and you can decide for yourself if they are what you are looking for in a decent non wallhanger saber replica.

The pattern is based on the Austrian 1827/1833 sword for officers. As with any officers sword, there was some variation based on personal preference - perhaps more so with this model given the heterogeneous nature of the Austro-Hungarian armed forces. Pictures below are two examples I found from the website. 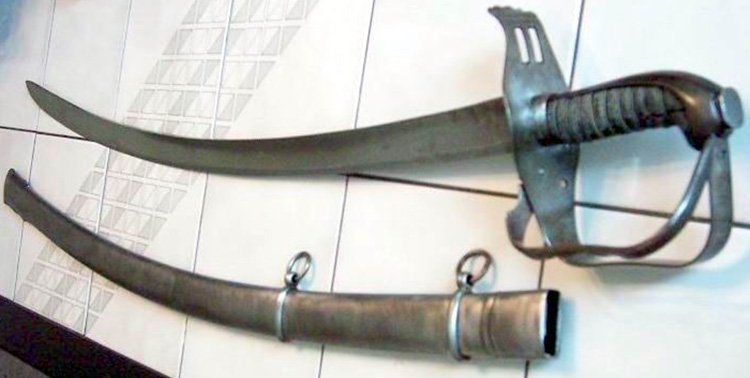 The Universal offering appears to depict a more "mainstream" variant with a standard hussar-style blade. The history of this style of sword has been covered elsewhere, but suffice to say that it is a style befitting a soldier of the Dual Monarchy on the Eastern edge of Europe. The guard also appears to be a more robust construction than the first example pictures, being intended for combat rather than parade. 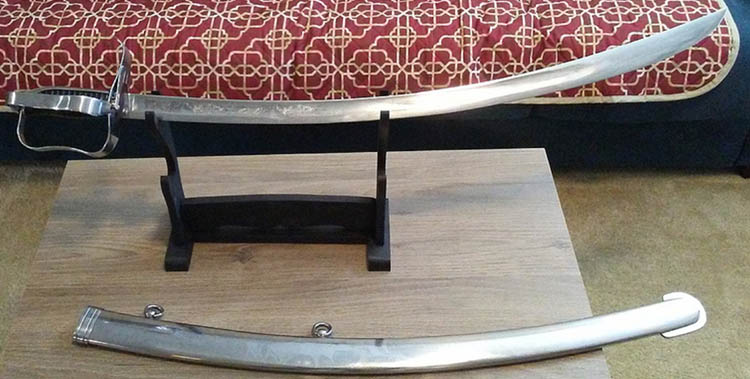 I do not have my measuring implements, but the blade thickness at the base of my replica 1827 is closer to 6 mm than the 7.2 provided by KoA. Other than that, the other stats seem to line up fairly closely with those provided

From here, we see several interesting values. The first is the taper. A lot of people talk about taper as if its the magical ingredient to making a sword handle well. I have argued that this is a gross over-simplification. No, I am interested in the taper here because of what it implies for the sword's aesthetics.

What role does taper play in a sword's aesthetic qualities you ask? Well, this sword, in its current guise, mounts a 1796-style blade. One of the key features of said blade is its broad, flat foible which widens near the tip to give a vicious hatchet point for cutting Frenchmen. To me, this is the most important feature of the blade, and will make or break a replica. The taper to 2.5 mm at the tip helps the Universal 1827 capture this look much better than other replicas. I also like the fact that the blade actually gets wider at the foible, unlike the CS 1796 which stays practically a constant width throughout. Overall, this replica does a good job of capturing the visual feel of a Hussar-style or 1796-style sword 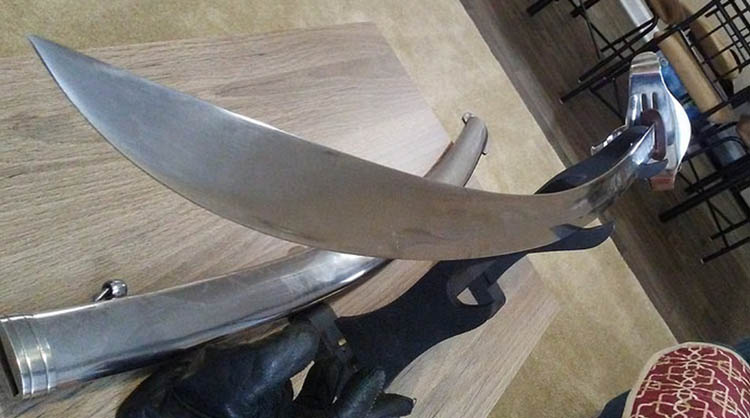 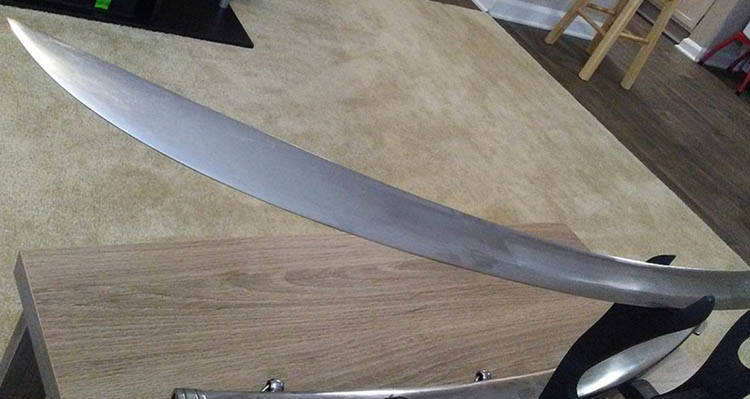 The distal taper stats also look good from a handling perspective. However, as I said before, looking at taper along is a gross over-simplification. What is more telling is the weight and the PoB (point of balance).

At 2.4 lb the Universal weighs the same as my 1822 LC - and that thing has a HUGE 36 inch blade. The PoB on my example is around 8 inches, which corresponds well to the 8.4 inches on KoA, suggesting that most of the weight is in the blade. The distal taper figures says the blade goes from 7.1 mm to 2.5 mm, but what they do NOT tell you is that the blade stays a constant thickness until right up to the foible, hence the extra weight. The fullers are decent, but need to be a bit deeper IMO to make this a very lively weapon. As it is, the handling is pretty clumsy - its usable, but feels like a much larger sword than it really is

One other interesting figure from the stats table is the grip length - at 4.25 inches I am confident that this model does not suffer from the micro-grip which plagues other Universal models like its 1833 dragoon or 1796 HC. Nonetheless, I was worried that the P-guard would be a bit dainty and under-sized. However, I was pleasantly surprised to find this was not the case. There is plenty of clearance (2-2.5 inches) on both axis with the guard fully deployed, which allows for a wide range of unencumbered motion. 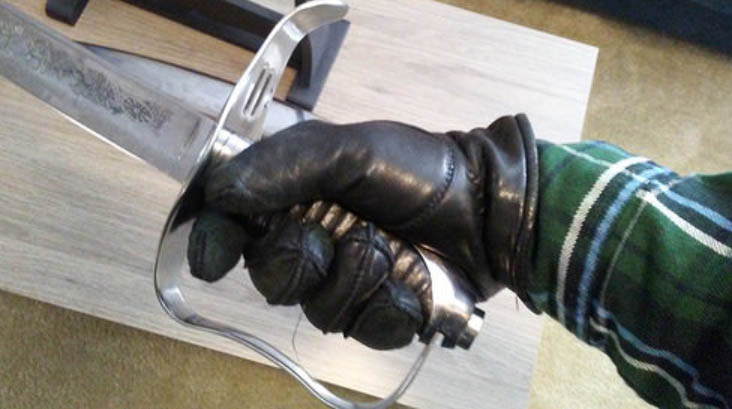 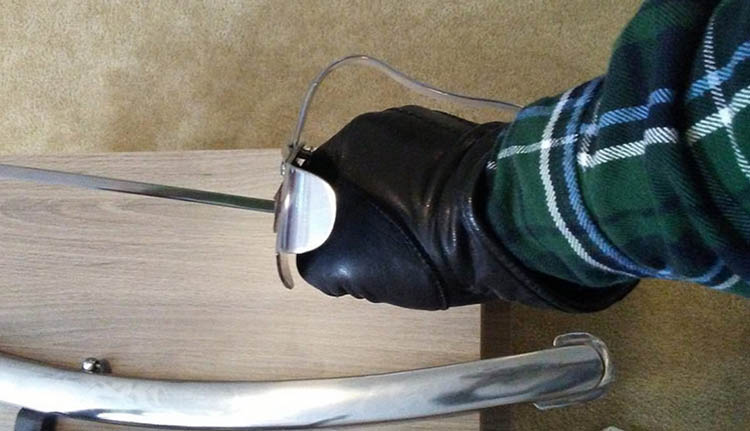 I was also pleasantly surprised at the size of the guard from a visual and protection standpoint; it has the design of a P-guard, but the front plate is so large that it feels much more protective than its 1796 cousin. With the side bar deployed, you could treat it almost like a very light bowl or basket hilt sword rather than a P-guard. The guard material is pretty robust steel as well, and could likely take quite a beating unlike the Windlass tin can material. This makes the sword feel like a much bigger sword than it actually is - gives it a bit of a heavy cavalry vibe, which in a way balances out the extra weight of the blade. In other words, the heavier blade does not feel *quite* as out of place as it would be on say a plain 1796 LC hilt.

The grip itself is a bit wide in the longitudinal axis (is: same axis as the blade) for my taste, but that is a personal preference. It is well sized otherwise. The back strap does fall off towards the back, but I found this does not compromise support. The grip lacks the slight forward cant found in many other cavalry sabres however, though slope of the backstrap does compensate for this to a degree 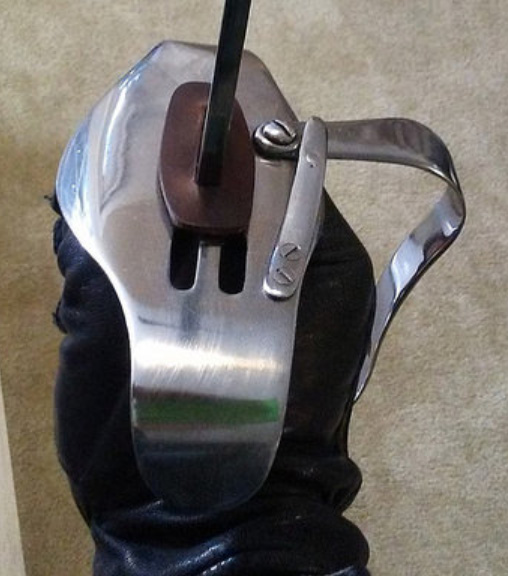 The build and weight of this sword puts it much more in line with a troopers weapon than an officers plaything, which is a definite plus. Unfortunately, the build quality also feels much more like a troopers sword as well. The actual finish on the piece and the construction of the swinging guard mechanism is well done. However, there was a noticeable gap between the backstrap and ferrule. The back peen block also does not quite line up with the grip or the blade, suggesting that the pieces themselves may not have been designed to fit properly (i.e.: the issue is with the blueprint and not the execution). 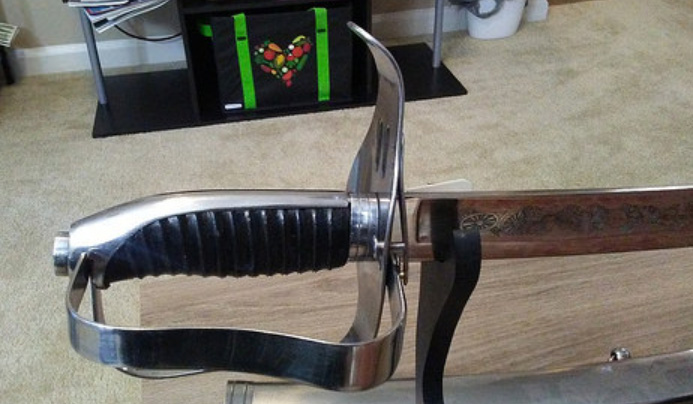 Further evidence for this hypothesis appears when you look under the leather washer. Here we see a gap between the guard and the blade, which is disappointing but not unexpected or unreasonable given the price point this occupies. Whats more relevant is the fact that the blade does not appear to be square with the guard plate, again suggesting that not everything is in alignment. This gap is not apparent with the leather washer fitted though people intending to use this sword for cutting may want to be careful, since the stress of cutting may not be properly distributed. 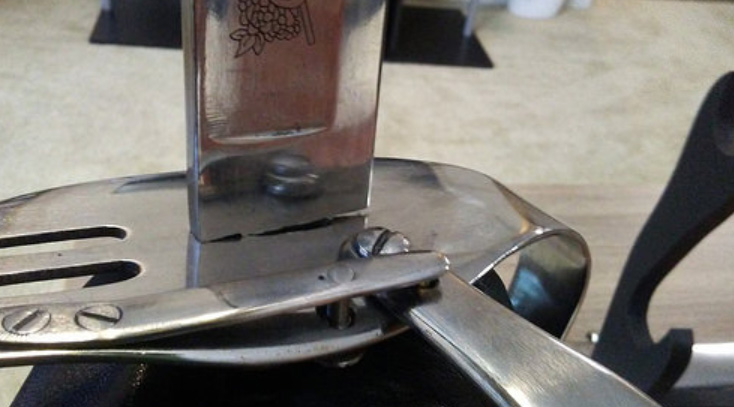 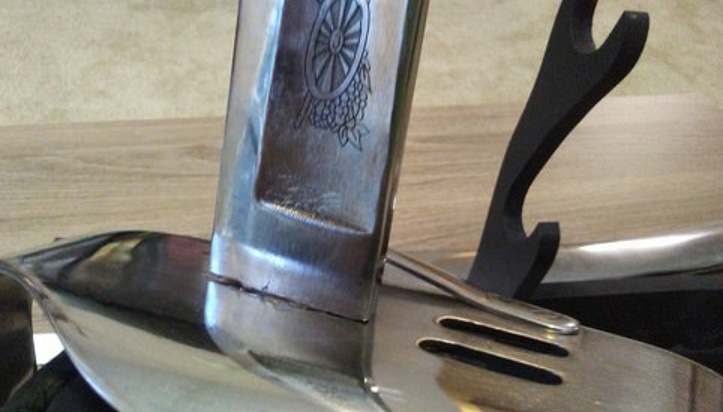 Lastly, we get to the scabbard, which is generally well done. However, it is COMICALLY over-sized, with an opening that is a full 10 mm wider than the blade. Even given the extra-wide foible I estimate there is an excess of 5 mm at least. I suspect that they took the scabbard from their 1796 LC. It is well built and holds the sword well so no complaints there I guess 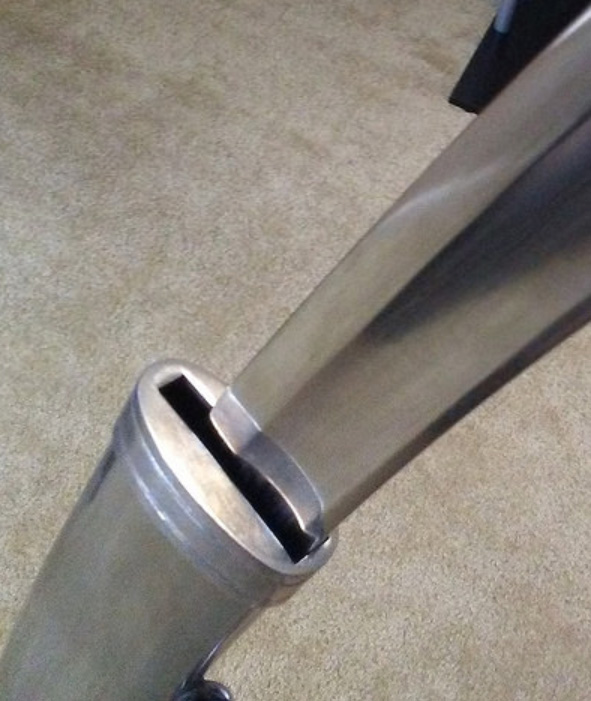 Overall, this is a mixed bag. I genuinely like the sword - the blade captures the visual appearance I am looking for, with its flat, hatchet-shaped foible. The guard is much more robust than I had expected, and gives it a very unique feel - it genuinely looks and feels "special" rather than being just another 1796 LC-wannabe. On the flip side, the handling is as sub-par - that 8.4 inch PoB really says it all. The guard balances that out a bit, but it can only go so far.

Personally, I value the aesthetics over performance, so I am happy with it. I would be much happier if it came in at $200 rather than $250, given the build quality issues. However, for those who want something which handles well, there are better alternatives - the Princess of Wales, or even the CS 1796 are better choices.

Afoo picked his sword up HERE at Kult of Athena for $251 which is the best place and best price to pick these swords up online. A sharpening service is available on these swords for an additional $25 if so desired.